My husband is always stealing my air hose out of my shop. To be honest with you, it drives me nuts. Lol. It does so because the one hose reel I have is in the middle of the shop and in order for him to use the air, the hose has to be strung out in the middle of the shop floor, out the shop door, and all the way around to his garage on the side of the house. It’s kind of a pain in the butt and today I’m gonna do something about it! 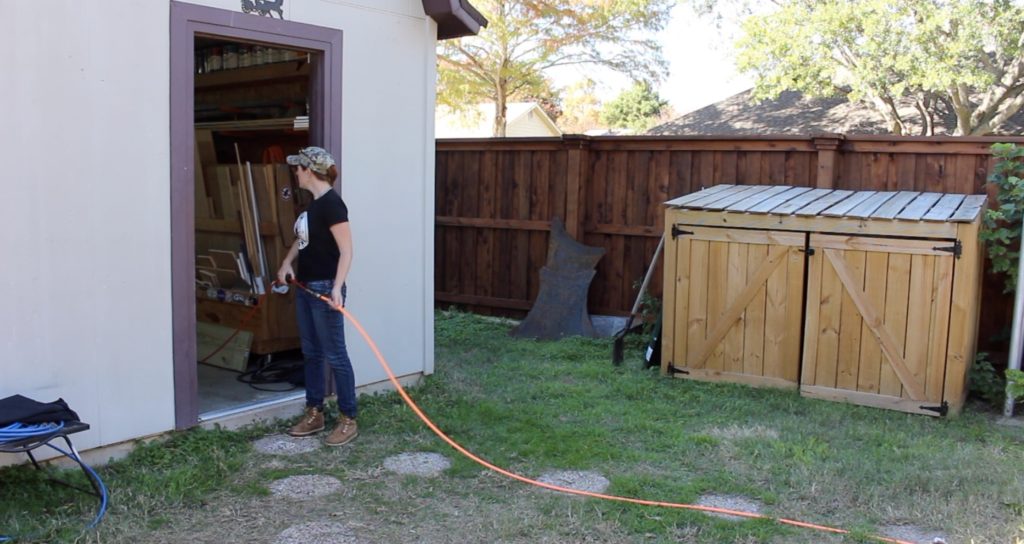 My plan is to simply dig a trench from the barn to the house, lay in some conduit, and then use the conduit as a raceway to push the air line through to the house. I already have a compressed air piping system in the shop, so I’ll basically be tying into my existing system with some hardware I have left over from the original installation earlier this year.

Things I Used For Tis Project:

NOTE! Before breaking ground on your own digging operation it is a good idea to have all of the underground utilities located. After locating mine, I found that I would basically be crossing over the main electrical line that goes to my house and my barn. However these lines are not only in conduit, they are also about 18” deep in the ground which means I’m safe to dig a shallow trench between the two structures. Just a heads up!

Here is a build video covering the the basics of this project:

I’ve never dug a trench before. Since I tend to get excited over things I’ve never done before, that’s exactly where I started. My father-in-law happens to be a “professional ditch-digger” and was happy to train me up on the techniques of operating a shovel.

I know this might sound kind of silly, but like any other tool, there is a right and a wrong way to use to use a shovel. Fortunately for me, the trench is not really that long (maybe just over 20’) and the sandy ground was recently rained on so it was pretty forgiving.The shovel I’m using here is known as a “sharp shooter” or a “spade” depending on who you’re talking to. What doesn’t differ is the fact that this thing is the go-to tool for trenching jobs like this and is fairly easy to use. 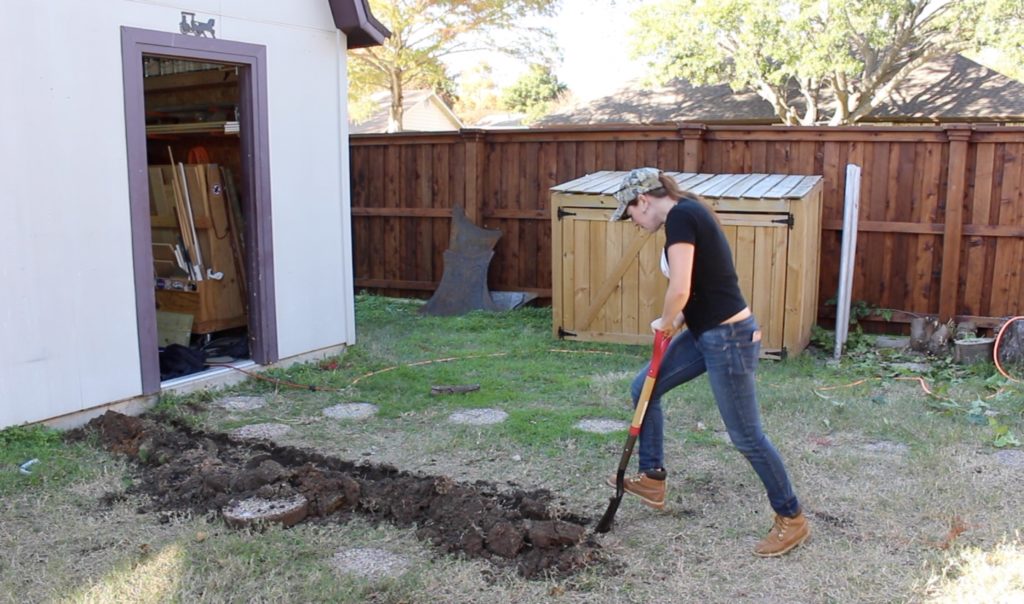 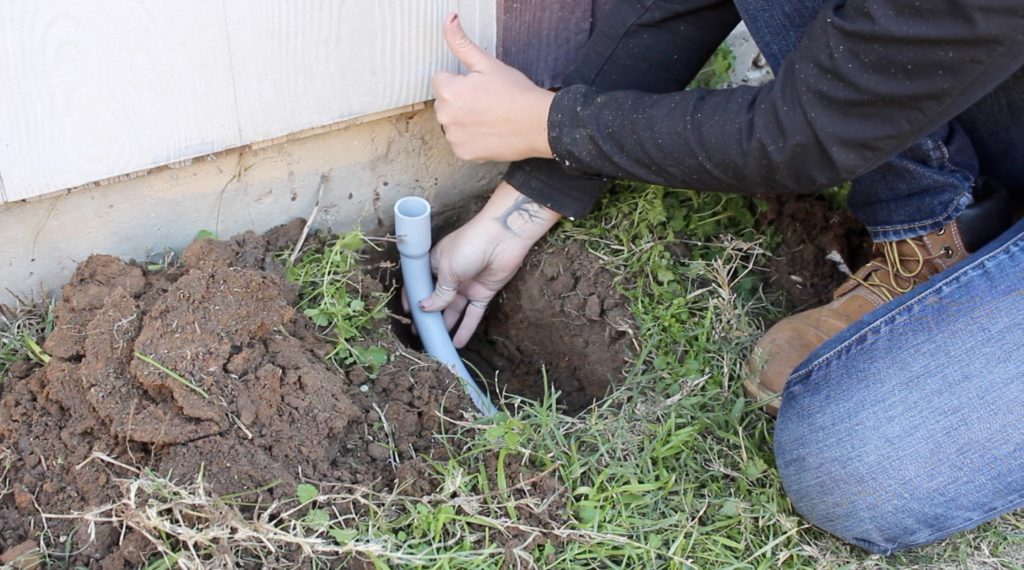 Moving along with the trench is pretty easy with this soft dirt. I would simply line the shovel up in the direction I was heading, break up the ground a bit by pressing the shovel in with my boot, then levering the top of the shovel handle backward to scoop it up. I made a mark on the shovel to make sure I was going in the same depth each time.

Occasionally, I would back track and clean the trench out real good from a bit of a different shovel angle. I motored along at a pretty steady pace until I got near the house. I knew I would be crossing the incoming cable line to the house and did not want to cut it. Consequently, I was sure to not be too heavy handed with the shovel and just take my time. Once I got to the house, I did the same thing that I did at the barn; dug the hole just a little bit deeper than the rest of the trench. 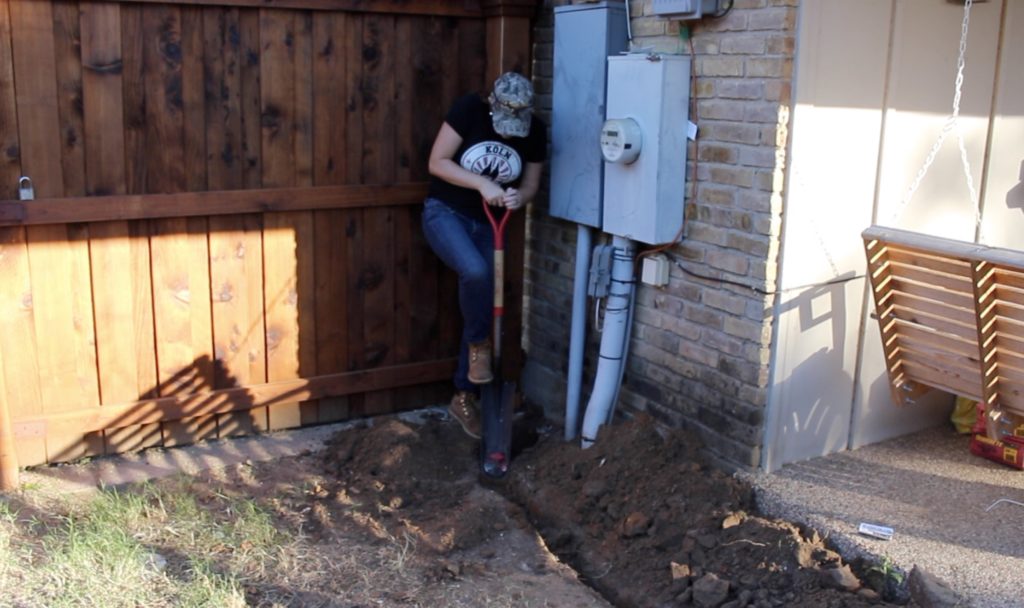 I ran my PEX compressed air line through grey PVC conduit. Although the PEX line is rated for direct burial, I decided to put my airline inside of 3/4 “ grey PVC for added protection against future “diggers”. I used a sweep 90 to come out of the ground at the barn and the house. 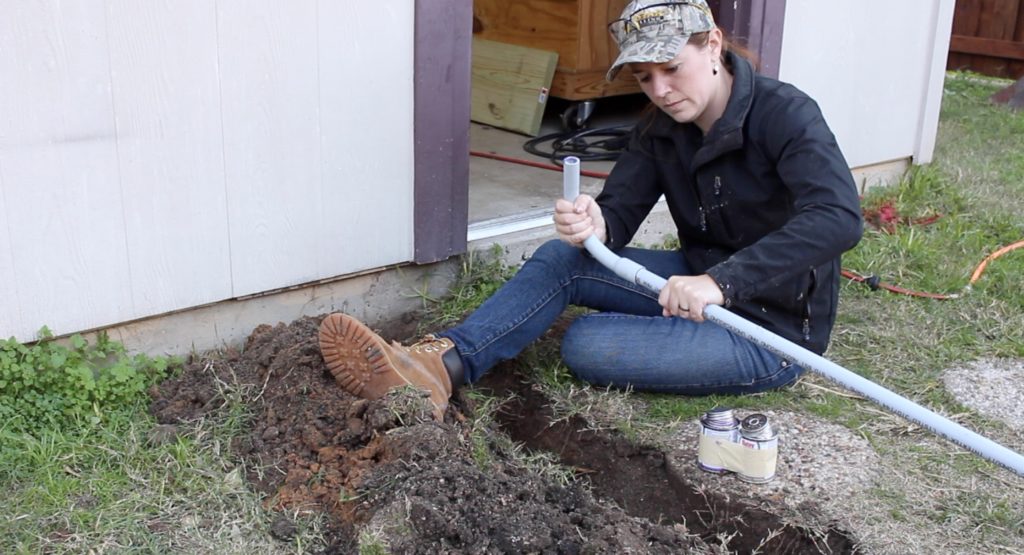 Once all of the PVC was glued together in the trench I covered it up with dirt and stomped it all down the best I could. I know it looks rough right now but come spring time the grass will grow back just fine. 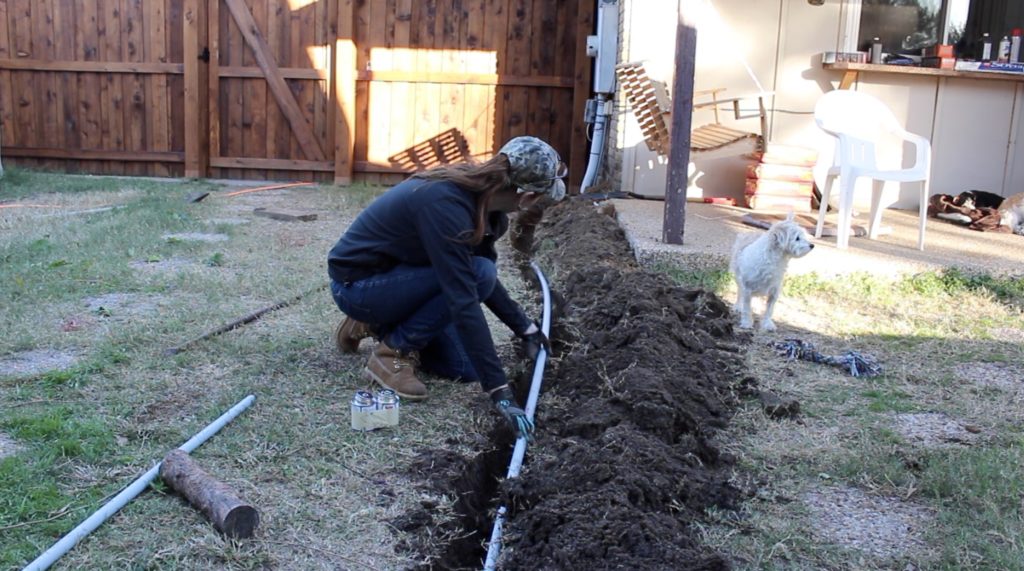 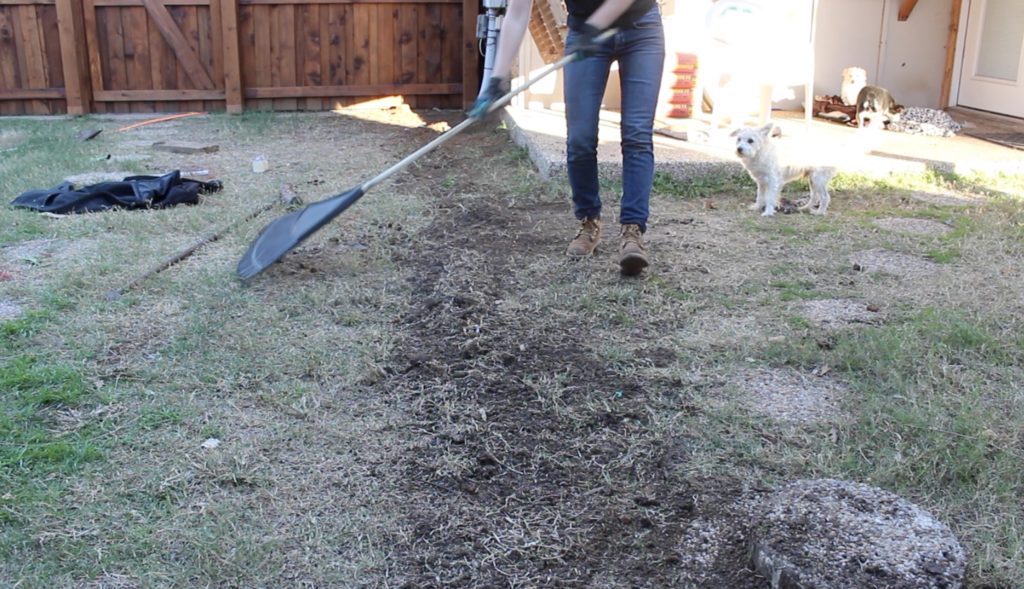 Passing through the wall

Passing the conduit through the wall was certainly the most challenging part and it really isn’t too bad at all. I decided to use 2 sweep 45’s to pass through the wall. On the outside of the barn I lined up my fitting where I needed to make my hole. I basically cut an oval slot into the exterior siding. Using a hole saw, I was able to cut a lower and upper hole and then cut out the middle with a jig saw making an oval. 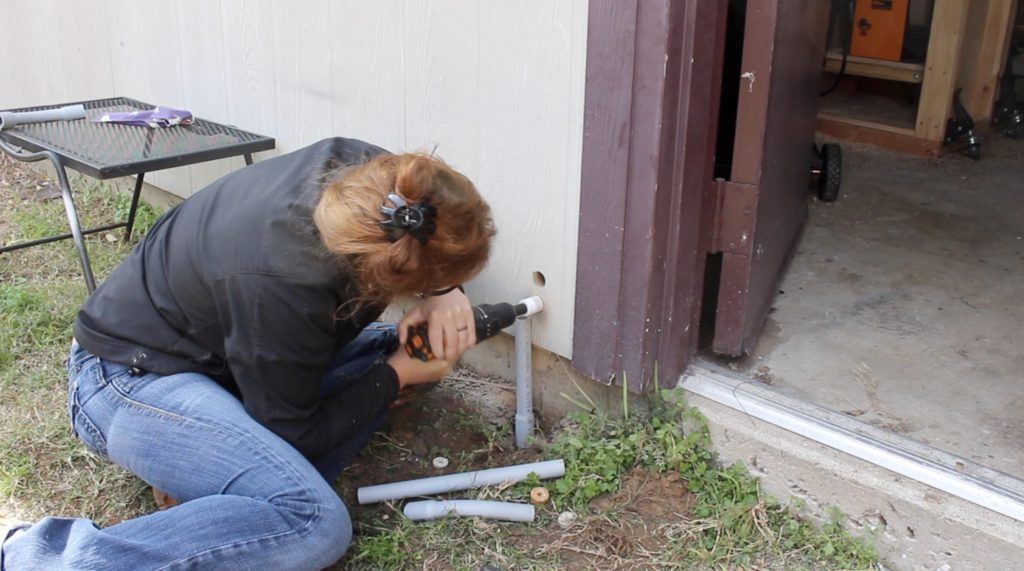 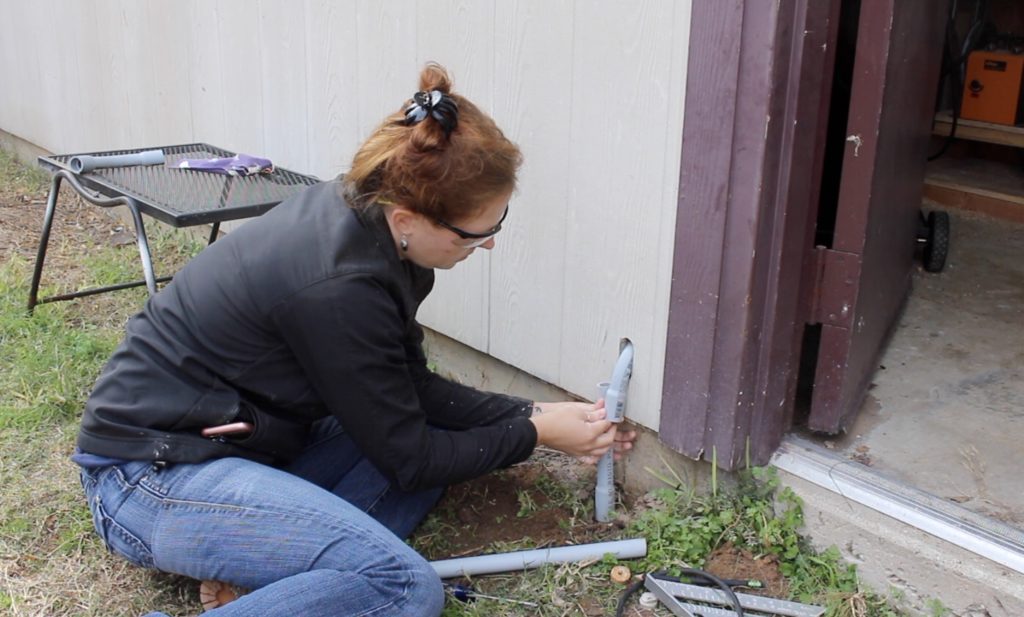 For the inside hole I measured out the location of the hole based on the cuts I made outside the building using the foundation as a reference. Once I got it drawn out on the wall I just repeated the same steps as before using the hole say and the jigsaw. After the 45’s were installed, I used clear silicone to seal up around the hole. 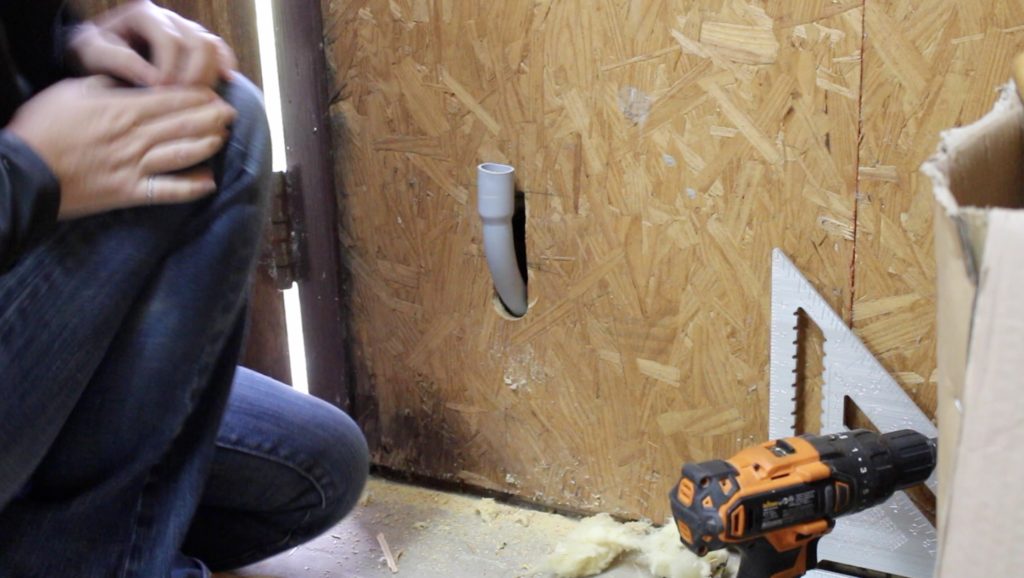 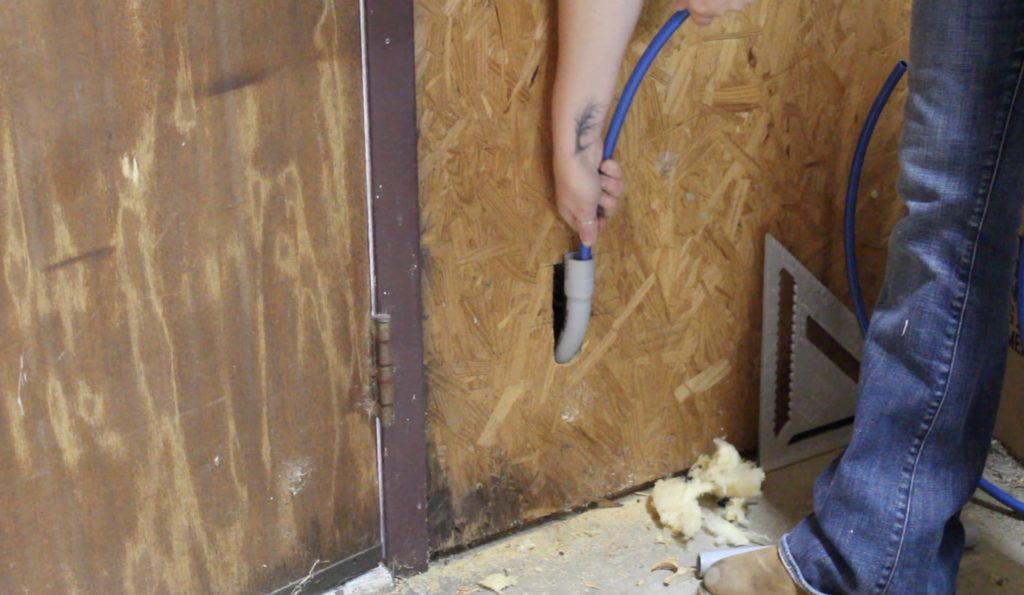 Connecting the to the existing airline was very easy with the help of the left over fitting I had from the original install earlier in the year. I did have to buy some extra tubing for this job but that’s really about it for the compressed air part. I installed a ball valve at the connection point where the new addition comes into the building. This will allow me to cut off the air supply to my husbands shop if needed….like if he make me mad and I wanna sabotage his air tool usage : ) lol….jk 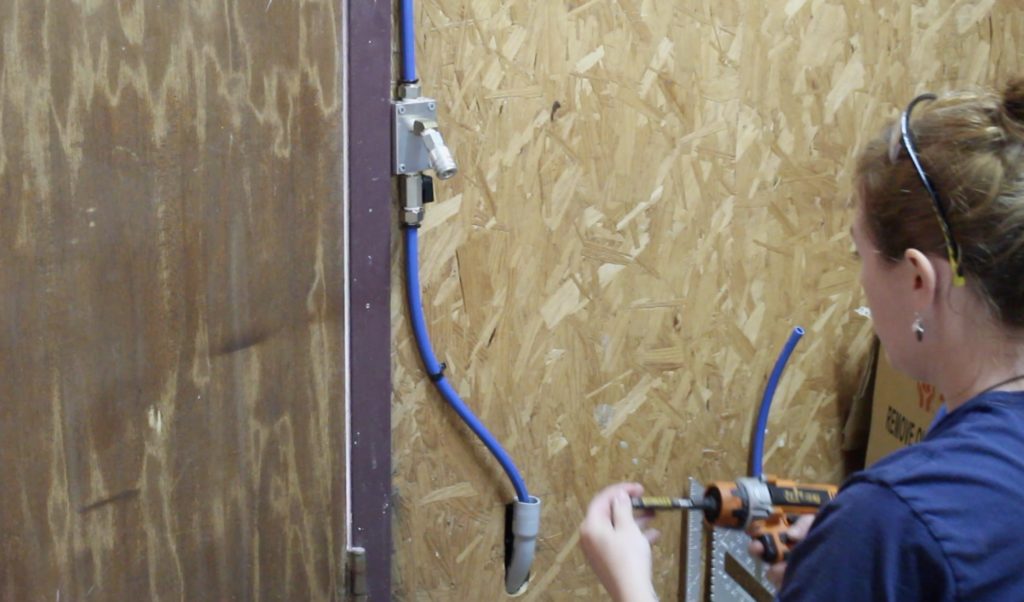 Over by the house I had pushed out enough airline to feed up into the attic. I installed the last piece of conduit onto the remaining sweep 90, fed the airline through the conduit and then inserted into a hole I drilled in the eave. I used one hole conduit straps anchored in to brick to hold the conduit to the house. 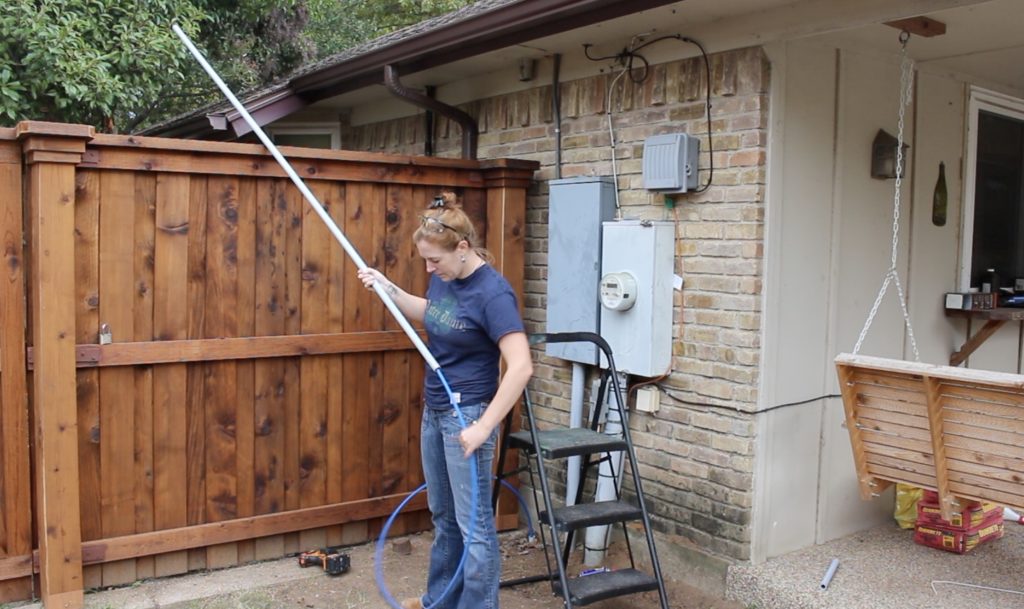 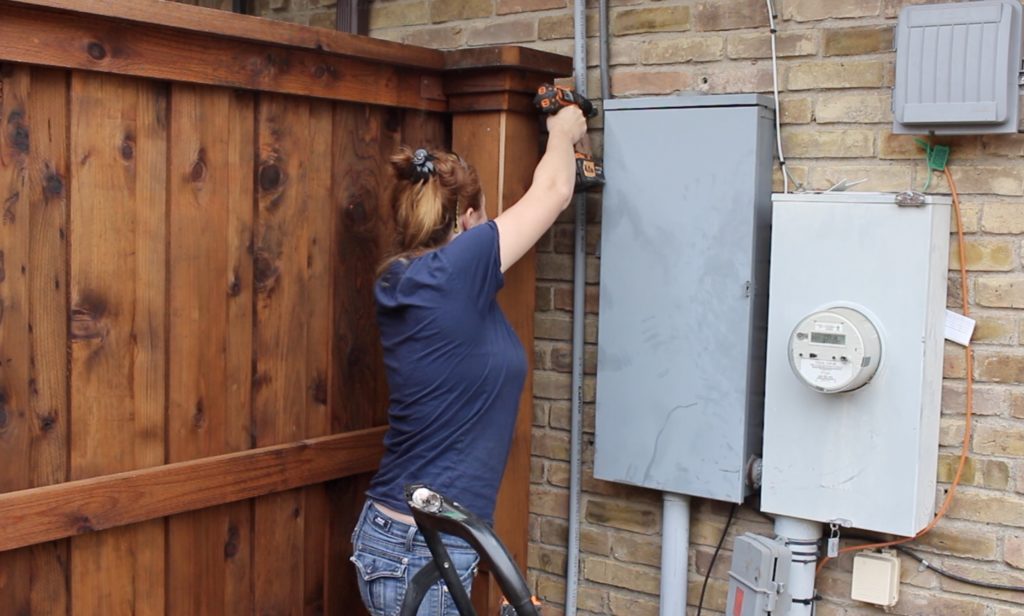 Moving inside the attic, I fashioned up a reaching device (AKA coat hanger duct tapped to a broom stick) to reach and grab the airline which was tucked over in the corner of the attic. 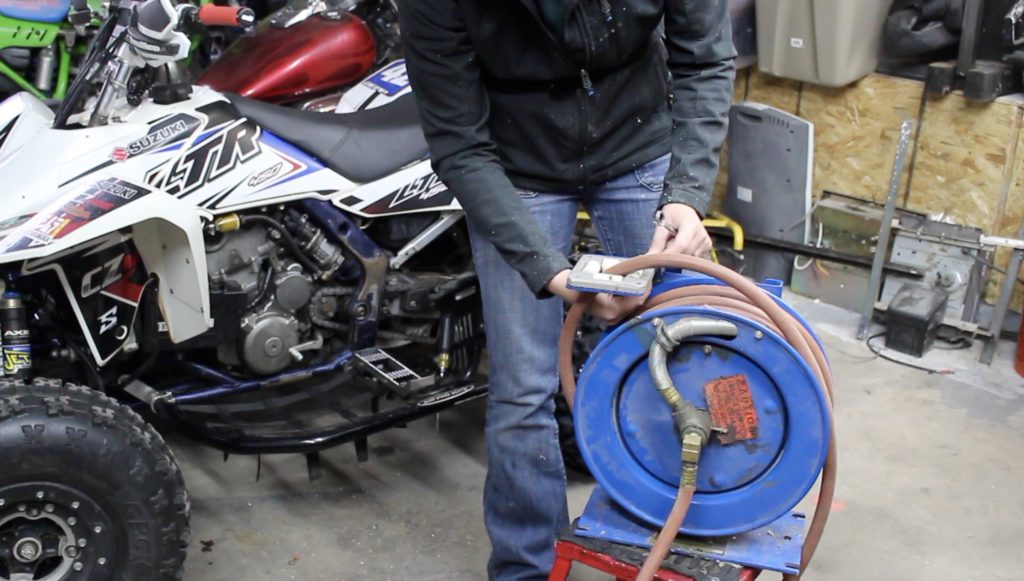 I removed the Roller plate you see here on the hose reel and used it as a simple template for my access hole. After making sure I was clear on the back side, I used my jigsaw to cut the hole. 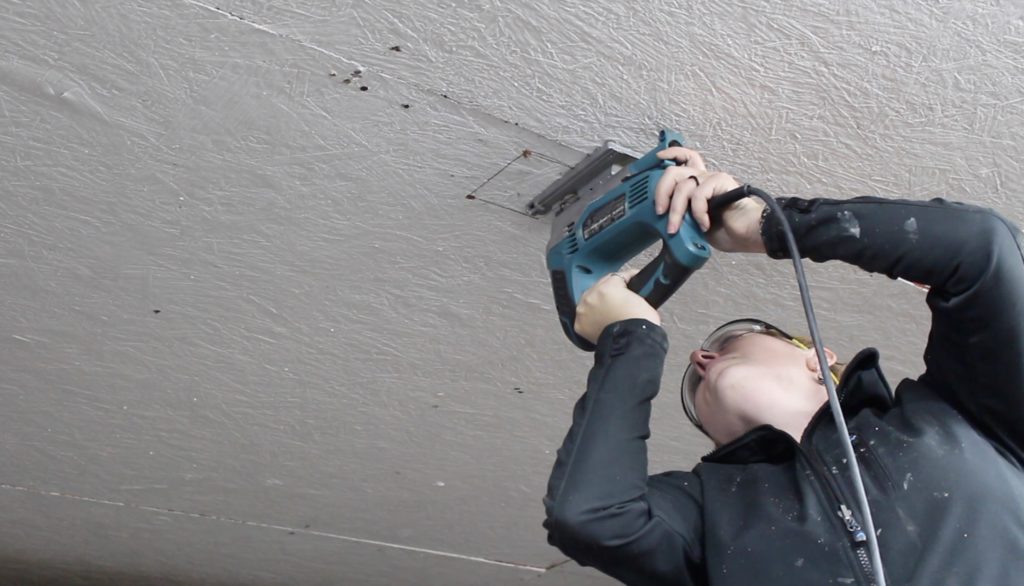 Lastly, I mounted this hose reel up in the attic and made the final connections to the hose reel using some basic fittings I already had in a storage bin. After the connection was made, I checked for leaks and called it a wrap! 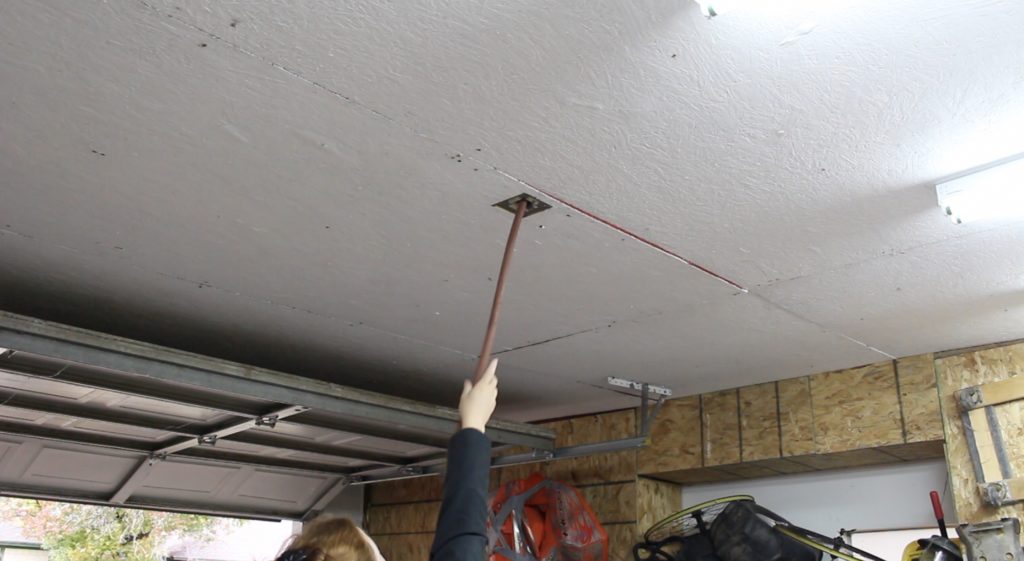 And that’s it! My husband now has his very own air hose in his garage and no longer needs to drag my air line through the middle of my shop, out the shop door, and into his shop. The over all cost of this project is about 100$ for the flexible air lines and some miscellaneous fittings.

Thank you so much for stopping by to learn a bit more about this project and support what I do.

Have a great week – April.