The fold down out-feed table has been working great but I thought of a couple of other features I would like to include in the design before turning the chapter to another project and calling this one complete. This week I put my focus on incorporating a roll of craft paper to the underside of the out-feed table.

I started this week’s project out by focusing on the making the slots for the miter sled I will make at some point in the near future. Triton recently sent me an adapter for the router that enables it to be used on the track saw track. The timing for this little gem couldn’t be better since these slots in the table top are basically long straight cuts with a square profile.

Things I Used In This Video:

After attaching the adapter to the router, I carefully positioned the track exactly where I needed it. I took my time during this step since I really really wanted the cut to come out in the correct spot the first time. The router adapter for the track comes with a slick little micro adjuster that really let me fine tune the position of the router bit.With the two ends of the track clamped into position, I made my first pass. I did not cut the entire depth of the slot in one pass; instead, I slowly chewed off the entire depth by making ¼” passes until the last little bit. Its best to take off as little as possible, say 1/32”, on the very last pass to get the best surface finish you can on the bottom surface of the slot. 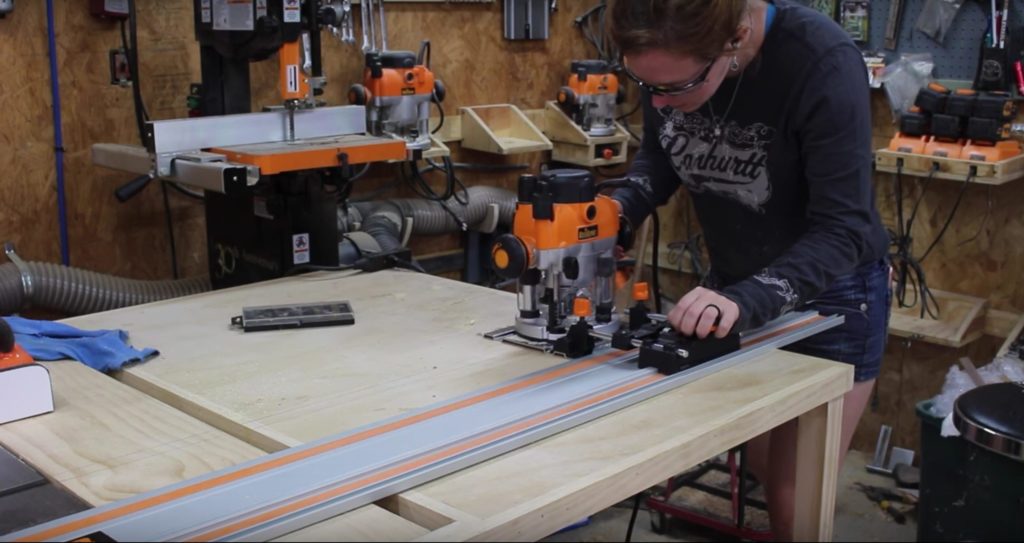 I made the slots in the table quite a bit wider than the slots that are in the cast iron deck of the table saw. The slots on the table are nice and wide so that the T-track inserts have plenty of room for bulk material around them.

The inserts I created are made from some old walnut I have had sitting on the shelf for some time now. I chose walnut for a couple of reasons: one, because I had it on the shelf, and two, because I thought the stark contrast of the cabinet grade plywood and the dark walnut would look really nice. I used the table saw to cut the strips of walnut to the size of the slots. Once the width was dialed in, I moved the strips over to the planer to reduce the thickness down to just a tad below the depth of the slots.To keep the walnut inserts in place, I decided to glue in some short dowels. I came in from the ends of the walnut strips by about 3” and drilled a hole through the walnut, and stopped the drill bit just shy of breaking through the bottom of the out-feed table. This will leave me with a through hole on the walnut and a blind hole in the table slot. I find that using a simple piece of tape as a depth gauge helps me to know when to stop plunging the drill in.

Both of the walnut strips get two holes drilled in them for the dowel plugs. After the holes, I cut four short pieces on dowel rod then hammered and glued them into place. The bit of plug that protrudes from the walnut is shorter than the hole depth in the table slot so that it does not bottom out in the hole of the slot. If they’re a little long, you can simply sand them down a bit to take some length off of them.Note: I recommend driving in the plugs from bottom side of the walnut inserts. By doing this on a flat surface with the insert upside down, the plug will stop flush to the top of the insert. However, it’s important to realize the inserts are now directional.

Rockler makes some rally nice extruded aluminum T-track material which can be adapted to nearly anything you have in mind where you may need some T-track hardware.  I used my miter saw to cut the T-track but there are plenty of other ways to cut this material.Since my out-feed table will most certainly double as an assembly table every now and again, I figured I would definitely get some use out of having T-tracks readily available on the same surface. Installing them is as straight forward as cutting to length, cutting in a slot with the router, then screwing them in place.

The walnut inserts are more than wide enough to support the T-track. The T-tracks are exactly ¾” wide. I happen to have a ¾” square bit for my router which worked perfectly for making slots for the T-track. Making these slots went just like the first set did but not as wide obviously.I set the walnut inserts into place, positioned my router over the center, and then made one solid pass with my ¾” bit on each insert. The T-track laid in perfectly and got secured into place by first pilot drilling then screwing the track to the insert. Flat head screws were used in the countersinks of the T-tracks to ensure the screw heads do not stick up and interfere with the T-track hardware. When the inserts are removed they’ll need to be stored in a place that kind of makes sense. I chose to store them on the side of the fold down table and use the dowels to hold them in place when the inserts are not in use. Had I been thinking ahead I would have created these holes before I put the dowels in and just used the holes in the walnut inserts as drill guides…..but I didn’t. Instead I basically measured out the positions of the dowels then drilled my holes. Fortunately, the fitment was pretty tight and the walnut inserts now have a place to hang out when not in use. 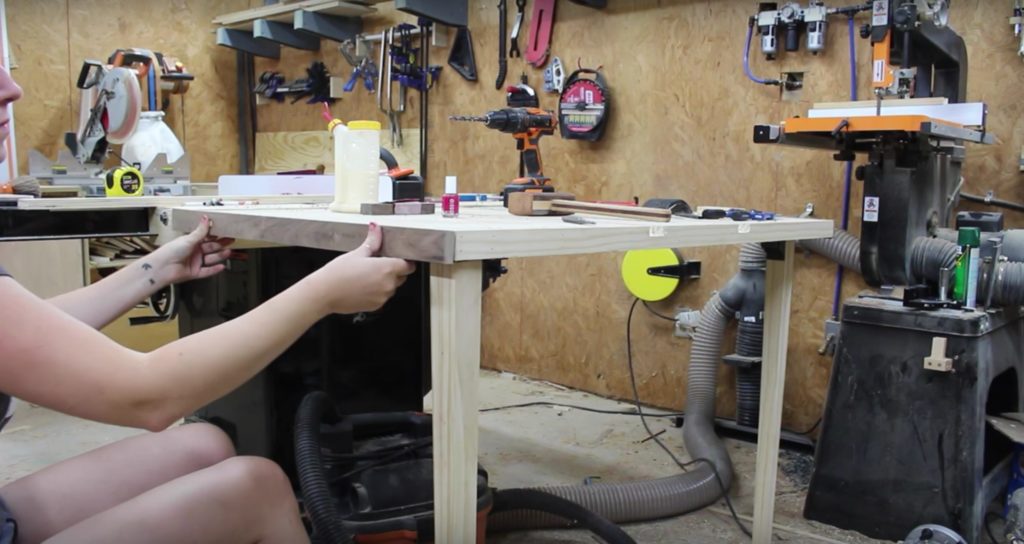 Next came the craft paper roll. I have seen these on other table saws and out-feed tables around the web and I really like the idea. I found a large roll of craft paper at the big box store for pretty cheap. To hang it on the underside I simply made some small brackets from 3/4” plywood. I traced out the diameter of the roll on the small piece of scrap, then added a square feature to one side of the bracket so it can mount to the bottom side of the out-feed table block.

Once I was happy with the shape I cut out a duplicate for the opposite side of the paper roll. Finally, a center hole was drilled so that I could fit an axle from one side to the other for the roll to turn on. I had some old conduit lying around on the material shelf from an earlier project, which worked great for supporting the roll.With the roll installed, I messed around with a couple of different ideas for routing the paper in a way that would make it easy to grab the paper from the top side of the table but still be out of the way when it was not needed. I finally settled on the idea of using small strips of wood which I cut from a long strip of scrap pine wood. This option worked perfectly.I created a couple of small stand-offs for the strip of wood so the paper easily slides through the guide as it unrolls. I made two of these small guides; one on the bottom of the table block and one on the front side. This helps the paper to easily route from the bottom to the front side of the table block.The final touch to the paper roll was a creating a means of cutting the paper. This one took me a minute to come up with but I decided on using a port-a-band saw blade for the paper-cutting feature. To cut the saw blade, I used a heavy duty set of Klein cutters but didn’t have the grip strength needed to cut this material. So, I did like any other creator and compressed the handles in my super jaws! It worked perfectly.The blade material got cut into strips and then attached to the table block as shown below. I attached the cutting edge of the blade just below the level of the deck so that it does not interfere with material passing by on the top side. There is just enough edge exposed to do the job of cutting the paper. 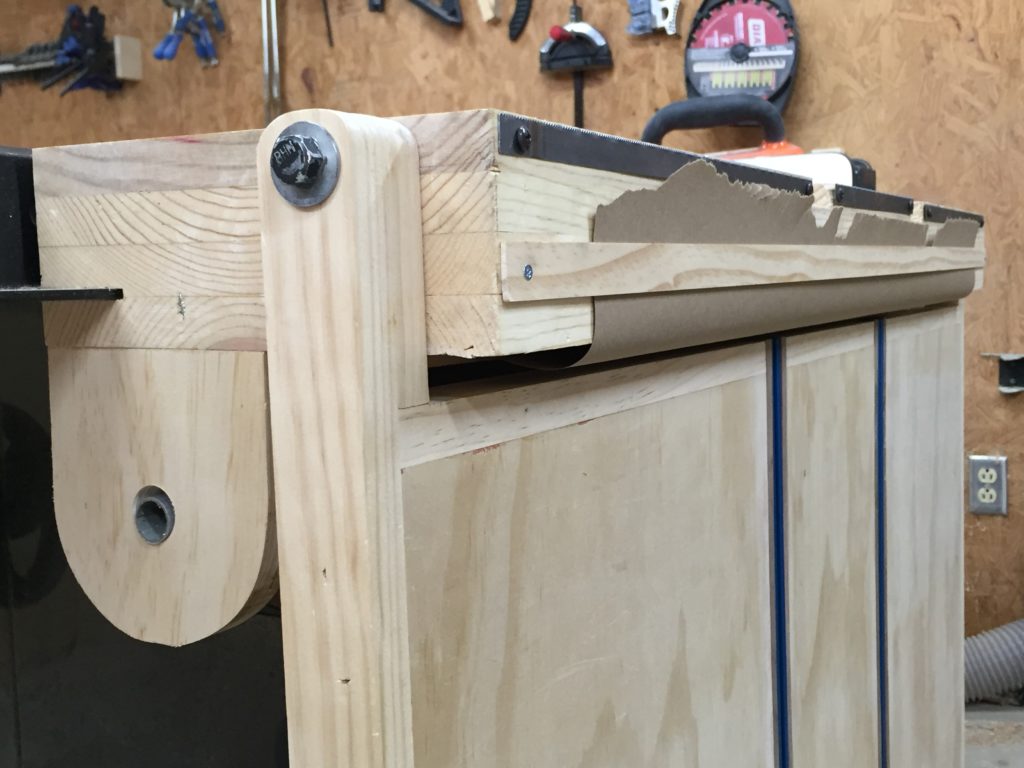 And that pretty well wraps it up for this weeks build. I am excited to use this drop down out-feed table and these T-track slots. Just in the past couple of weeks they have both proven to be pretty handy. Thank you so much for stopping by this web page and taking a closer look at the build. Have a great week! 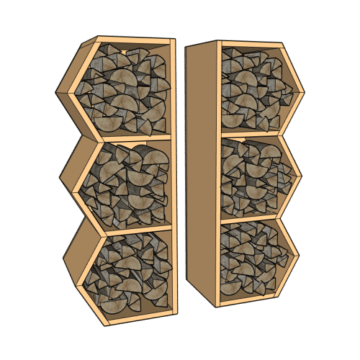