How To Build Your Own Dog Wading Pool

Two summers ago I built my dogs a little wading pool from rocks around the property. They absolutely love hopping in to get their bellies wet during the heat of summer. But when they go stay with my folks they don’t have a watering hole sooo this week I’m fixing that.

I made two versions: one that is made from a standard toddler kiddy pool. Then version two is one I plan to keep on the wrap around porch at the house.

Ok lets jump into it. Since this will be in contact with the ground and also around water I’m building it from treated material. I started by flipping out the wings on my miter saw stand and cutting down two boards that will make up the framing around the pool.

To create a ramp, I measured in from the edge of the board then used a straight edge to make a diagonal line. You can use a bandsaw, jigaw, or even a circular saw to make this cut but I used my track saw to make sure they both came out nice and straight.

My mom stopped in to say hi, so as I do, I put her to work 🙂 I cut three boards to be cross members in the framing and join these two rails together. Since this will be outdoors and around moisture I’m using Titebond III since it is a waterproof glue.

I applied glue then screws to attach the cross members to the rails… making sure to use the pool as a placing reference. When attaching these, I used a square to make sure I was attaching them at a 90.

I set Mom up on the miter saw to start cutting down the treated 1x boards that will make up the deck.

As she was knocking that out, I went back to the body and added in a few more framing pieces. These pieces will make more sense later on, but there purpose is to give support to the deck boards that will be cut to allow for the pool to slip in.

Then since I wanted to add in a roof to provide some shade, I also added those boards in. I used wood glue here and a clamp to squeeze it to the body.

And just a tip, if you use a squeeze quick clamp like this Bessey one, you can get it roughed in position and under slight pressure….then knock it into perfectly plumb and tighten down all the way.

Now on to adding the deck. Mom was done cutting the boards by this point and to start, I went to the far end of the ramp and attached that one first. This way I could line both sides up flush with the rails and keep it in square. Mom was still wanting to help so she tackled one side while I did the other.

You can see we are using and moving a spacer along to butt up each board against. You can make this as small or as large as you like, but don’t make it too big to start because these boards will shrink up as they dry out completely.

When I came to the uprights that will make the roof, I used a jigsaw to quickly cut out a notch so the boards could fit in around it. I also made sure to throw in screws in these boards into the additional framing members I added in earlier. Again, you’ll see why later on.

Alright, I’m sure some of you just thought I forgot a pool was going in the center…but I didn’t. I thought it would be easier to lay the boards out as is, then cut out the circle rather than try and cut the boards prior and hope it lines up. I first placed the pool, trying to make sure it was as center as possible….you can measure, but I just eyeballed it…..then I used a sharpie to roughly trace around the pool bottom. These things have a huge lip on them so you don’t have to make it super perfect or close. In fact there is a slight taper to the body so make your line then cut outside of it. : )

After making my mark I went around with my jigsaw to quickly cut things out. I test fitted it, saw where I needed to remove more material, then cut a little more until the pool fit nicely.

I had run out of deck boards so mom went and grabbed more while I was cutting the hole. Once she was back, we finished the decking portion then moved on.

So the next step is reinforcing the deck pieces that are out away from the edge. To do this, I wanted to gain access to the underside. To do that….I very carefully and slowly moved the unit to the ground.

With this view you can see how that additional framing member helps support these boards some, but another board to angle across goes a long way. I used a quick clamp to set it in position and screwed it down to each board it came across. I repeated in each of the four corners and this went a long ways in stiffing things up.

Next I found center on the ramp and attached a support member in the center of the frame. You can actually use one of the cut offs from making the two rails in the first step. After I attached it to the body, I moved around to the top side and screwed each slat down onto it as well.

Alright moving on to the roof. I cut up yet another board at the miter saw then laid out a roof shape. This can be anything you personally like. You can make it a curve or one long slope, but I went with a typical V shape. After making some marks, I used a straight edge to make straight lines then ran it over to the bandsaw to cut out. If you don’t have a bandsaw, a circular, track, or jigsaw would also do the trick.

I used the first one as a template to make the second, cut that one out then moved to attaching them to the uprights on the body. To make this job easier, I first measured down then clamped a block in place so I would have a ledge to set this roof rail onto.

I applied some more Titebond III here then screwed roof railing into place.

Now to attach the roof. You can cut these boards quickly by setting up a stop block at the miter saw. I once again started with the outside most slat, making sure it was flush on both ends when screwing it down. Then I just worked my way up to the peak.

Once there, I started down on the other edge and again worked towards the peak. Since my goal is shade here, I went with a much smaller gap and spacer between these boards.

Lets get a coat of stain on it. My mom offered to handle this task so I set her up with a foam brush and General Finished 450 Stain in the color of Cedar. I didn’t know how it would act going on treated material, but it not only went on just fine but completely transformed it and made it pretty looking.

While mom started that process for me, I moved to working on a drain for the pool. The water will need to be emptied regularly and picking up a fully loaded pool would be out of the question. I went on the hunt for a fitting with a rubber gasket and lock ring but wasn’t having much luck. A friend told me to look at water heater pans as he remembers a fitting coming with it. Sure enough….that was a solid recommendation.

Next I drilled a hole in the pool so the fitting could slip in, making sure the rubber gasket was on the inside, then tighten down on the lock ring. This all looked fine as is but I went ahead and added a layer of Titebond Ultimate MP sealant to the outside of the fitting just as backup.

I placed the pool in it’s position and just roughly drilled a hole in the area close to the drain. I made this hole slightly larger than the PVC that will run through it so I could easily feed it in.

A few more fittings, including a ball valve and I now have a way to drain the pool with ease. You could bury this line or route it as far from the deck as you want but I placed my unit where when I drain the pool, the water will be running down hill.

Then real quick, since I was making dog pools, I quickly made a second…smaller version. This is the same steps as the first so I’m just gonna glaze over this one. You’ll notice the pan is much smaller, so if you have smaller dogs then know you can use this same concept for any container that matches their size.

With this one having a rectangle shape to cut out, it is much easier to pre cut boards for. I went ahead and measured and then cut boards as I was placing the deck, instead of waiting until after.

I also put in a drain on the side then gave the entire thing a coat of stain to prettier it up some….or a lot actually.

Now, if the bottom of the pool doesn’t touch the ground when you place the pool, then you can add some gravel to the area first to build it up but keep it malleable.

If you’d like to build your own, I have a set of shaded dog pool plans here!

That wraps up this one. I’d love to hear what you think about it down in the comments below. Try and stay cool this summer guys, I’ll see you soon. 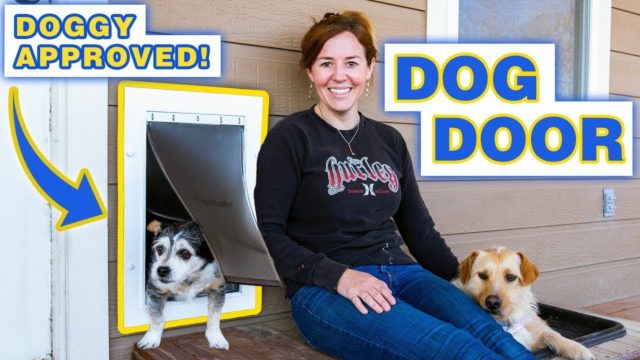 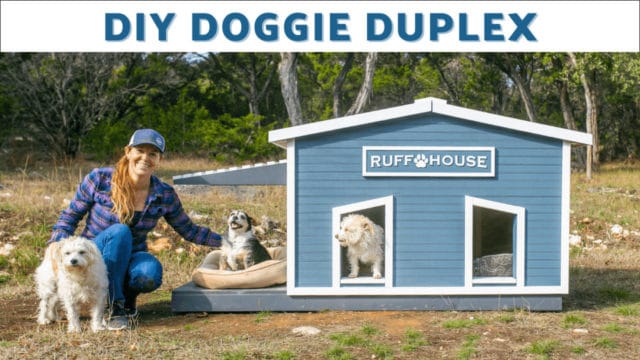 How To Build An Insulated Dog House | With Opening Roof! 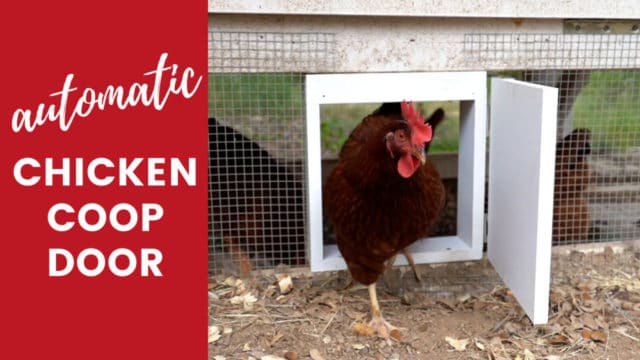