Finally! I can start decorating for Christmas. : ) I have been seeing such cute decorations all year and have been hoarding pins like it’s going out of style. Below is the collection of decorations I made and instructions I thought would make replicating it simple. I linked back to the original source on the header of the item. Merry Christmas everyone!
1) Melting Snowman 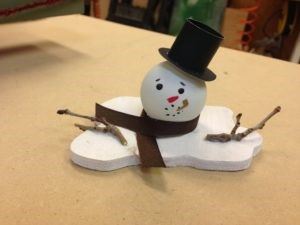 I. love. him. If I only made one thing this season it would be this guy. Instead of Frosty, I have named him Slushy. hahaha : D

1) I grabbed some 1/4″ scrap wood and drew a random puddle looking shape then used my scroll saw to cut it out then painted it white.

2) I bought a package of ping pong balls at Big Lots for 67 cents then used a sharpie to color on the face.

3) Then I hot glued the ribbon, sticks, and head into place.

4) To make the hat, I cut a small circle out of some black poster board I had for another project, then a rectangle. Note: Use a flashlight handle or some similar to make the top hat round. Then I used a little bit more hot glue to glue the two together then onto the head.

I had a lot of 2x4s left over from making my fold down work bench so I grabbed a length and cut it up to make a 2×4 snowman.

1) I cut the 2x4s then painted. To get the hat speckled, I just flicked my paint brush at it. (click on the photo to see my measurements)

2) I didn’t have buttons but I did have beer caps and hardware laying around. : ) So I used beer caps and screws for the eyes, a orange wire nut for the nose, then three bolts for the buttons. Then I found some ribbon left over from Thanksgiving and tied it on.

3) A friend decided he lacked something, so next I used my scroll saw and some 1/2″ wood to give him a proper Frosty pipe. Painted it black then used wood glue to glue it on.

1) I used another warped 2×4 I had and cut it to the lengths in the picture below then glued and clamped everything together.

3) Used my scroll saw to cut a star then painted it.

4) Bought some 50% off tiny tinsel at Hobby Lobby and draped around it.

4) Santa Hats
So I saw a pin on Pinterest of five different cone heights and the description saying “template”. I pinned it thinking of all the Christmas stuff I would be able to use it for…buuuut, then when I actually clicked on it I found out that I could only get to the template if I paid $12 for it. I thought that was crazy since it was a very simple shape. So I found a free template of a 5″cone template then used the below steps to create different heights.

1) First I lined the 5″ template up where the bottom line was completely flush against the bottom of the posterboard. Then I took a straight edge and lined it up so it was flush with the other side. Next I moved the template and used a pencil to mark my line.

2) I thought the next step was easier to explain with a short video, so here you are…
3) Now just cut it out. See how it’s the same only larger?

4) Wrapped the up into a cone shape.

Can you tell that middle one was my first?

5) I bought a bag of cotton balls from the Dollar Tree and for the bottom I actually unrolled them and pulled them apart some then just hot glued them around. The below photo is what it looked like after one layer. I wasn’t happy with it, so I did the same thing and added on a second layer.

6) For the top, I ripped the cotton ball up then used my cupped my hands to form a fluff ball and glued it to the top.

7) I cut stripes from black posterboard and glued them in place then went back with some glitter glue to make the buckle.

So here is a WilkerDon’t: I applied the glitter glue in one go then shut it down for the night. When I walked out to my shop in the morning, the weight made the glitter run! I was so mad. So learn from me and keep your hat flat until the glue has dried. As you can see in the below photo, the smallest was salvageable but the biggest was thrown out. (I was so happy it was the ugly one. : ) )

2) Since I didn’t make it come to a complete point, I grabbed a scrap piece and shoved it in from the bottom so that I would have something at the top to glue the burlap to.

3) I rolled out my burlap and then cut it down the middle to create the size I was looking for. Then I cut it into about 6″ strips.

4) Then I used my hot glue gun to just start applying them. I started at the bottom and worked my way up.

5) Since I could see the white in a few places, I cut a smaller strip of burlap and glued it horizontal so it covered it up.

6) When I got to the top, I just kinda wrapped and glued on a piece.

7) Last I spray painted it white then sprinkled some glitter on it while it was still wet.

8) I decided I needed a few more, so I repeated the same steps and made two smaller ones. 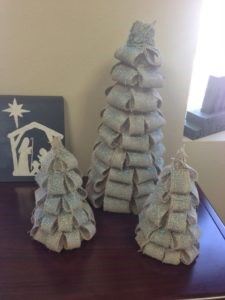 2) Then I grabbed another 3/4″piece of scrap and cut it into 2″ strips (just to give the background a little somethin somethin) then glued it back together and painted it white. My background piece is  11 1/2″.

3 Last I glued the letters onto the back and clamped it all down until it was dry.

1) I saw this scrap piece of MDF laying about, so I nabbed it up and painted it a light blue.

2) Then came back with a dark grey/blue where I mostly covered the light blue.

3) Next, since I can’t draw, I found a nativity scene I liked from a Google search then used my projector to project it onto my painted board then traced it on with a pencil. Then I just had to go back and paint in the lines with white.