Ahhh! My shop is on it’s way to becoming functional! I still have plenty of projects to go, but at least one more is off the list. Take a look and let me know what you think of my fold down workbench. 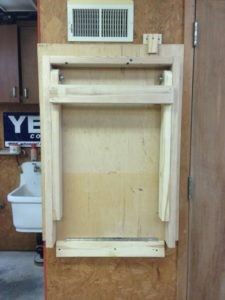 Pretty neat huh?…This would be a great bench for anywhere you need to have a temporary workspace but don’t have the room to give it up permanently. Such as a garage where you pull in your vehicles, or a sewing/crafts room, or even a spot for a child to sit and study.

I am really pleased with it. Before, I actually had a square card table hanging around to give me an extra spot to set stuff. As you can imagine, it’s not the most sturdy workstation. 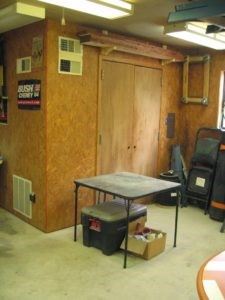 While I was contemplating how I was going to make the frame and legs, our set of bag toss boards caught my attention and I thought the design would work perfectly. 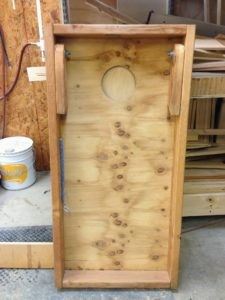 So bear with me as I explain the steps I took to get this project done. If something doesn’t make sense, then just let me know.

1) Before starting on the frame, I needed to figure out how large of a workbench I could fit into my space. I really wanted a 4′ bench, but however far out from the wall I came, I would need to have that much room on the wall for it to fold up and those darn air vents are invading my space. If I made it 4′, then that would make the table too low to the ground, so I settled on it being 3.5′ long and 2.5′ wide. This would give it a height of 31 1/2″ which is just slightly over 2.5′ which is roughly the height of my saw horses….: ) ok, that works for me. I decided to make the frame a little smaller than the bench top so that I would have 1 1/2″ of material overhanging on each side and 3″ off the front so that I could have space to clamp stuff to it in the future.

2) To start building the frame, I grabbed a few 2x4s I had in my scrap pile and cut them to length then used my Kreg Pocket Jig to join them together. 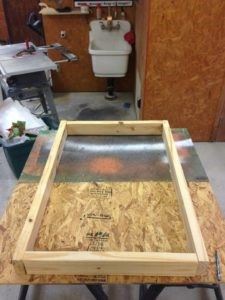 3) Next I grabbed this 3/4″ piece of wood from my scrap pile and set my frame on top then measured 3″ on the two sides. (I’m doing 3″ on two then will square it up after it’s cut) Once I had a few marks, I used a straight edge to draw straight lines and cut it out using my circular saw. 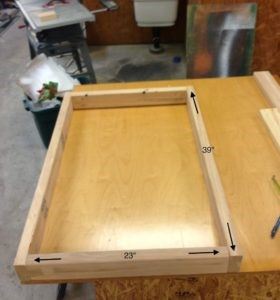 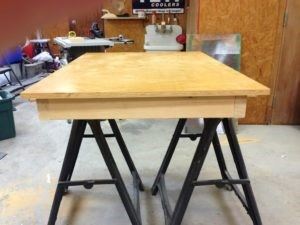 So far so good. Before attaching the top to the frame, I wanted to figure out how I was putting this thing on the wall. (Remember, I’m figuring this out as I go so I don’t put things together until I know they work…well, typically…)

Ok, so I messed around with a few different options and the one I settled on actually required me to remove the board that made up the back of my frame. See photo below for visual. This will allow the table to sit flush against a wall mount when it is in the up position, then only have a 1/2″ gap when folded down. 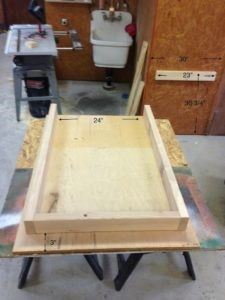 4) I used the piece of wood from my frame (the one I just removed) and after locating the studs, used three screws to attach it to the wall.

Note: When you are cutting this board, remember to compensate for the 2x4s that will be resting on either side when the bench is folded up. My wall is 30″, but the free space between my frame is 24″ exactly, so I cut the board to be 23″. Also remember to mount it 3/4″ below the line where you want your table top to be. So since I wanted my top to be at 31 1/2″ when it was folded down, I mounted my board at 30 3/4″. If you are using 1/2″ material for you top, then you only need to compensate for 1/2″. 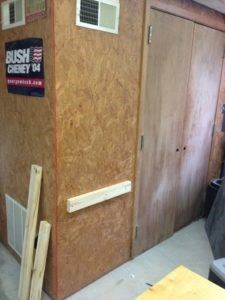 After dry fitting it to make sure it would work, I started attaching the top in place.

5) Once again, I used my Kreg Pocket Jig to drill pocket holes and attach the frame to the top. If you don’t have a Pocket Jig then you can screw it in from the top, just make sure to countersink your screws. 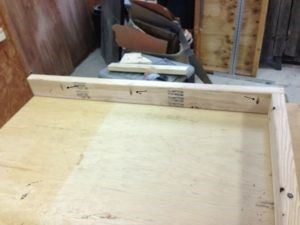 6) With everything snug, I put the assembly in place on the wall mount and screwed in a strip of piano hinge I had left over from a previous project. (Not throwing away scraps come in handy) 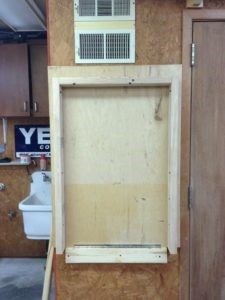 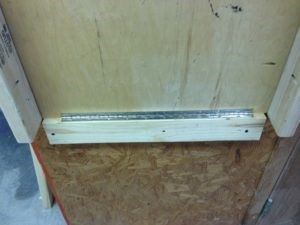 Time for the legs… 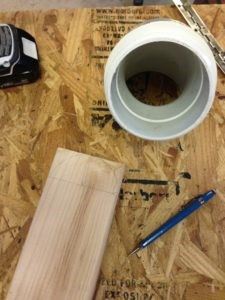 8) I first used a jigsaw to cut away most of the material, then finished it with my belt sander.

9) Then, needing to drill my holes for my hardware, I used my drill press to drill a 1/2″ hole on my center mark. If you don’t have a drill press then just take your time and use your hand drill but try and get the hole as straight as possible. 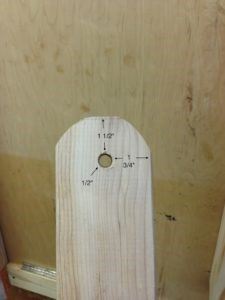 10) Now I basically repeated the same process on the two 2x4s that make up the frame of my bench except I came down 2 1/2″. Now, even if you used a drill press for the loose legs, you will have to use a drill to drill out these holes. I started with a 1/4″ pilot hole then worked my way up to 1/2″. 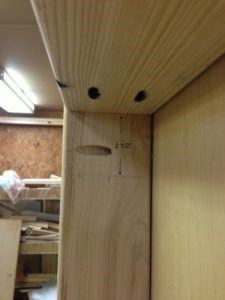 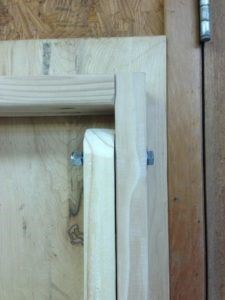 Now you could actually probably call it quits right here if you wanted to, but in order to not have to mess with the individual legs every time you pull it down, I put in a stop block that will automatically set the legs where they need to be….

12) To do that I grabbed my torpedo level and adjusted my leg until it was plumb (construction talk for perfectly vertical). 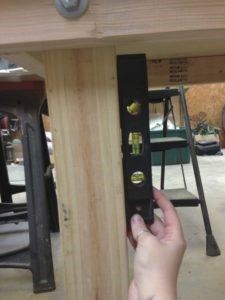 13) I grabbed my last 24″ long 2×4 and clamped it to the front of my legs where it was butting up against the frame of the table.

14) Then I took the portable block out from my Kreg and set up a few make shift spacers so I could drill a pocket to attach the stop block to my legs. Below is a photo of what I’m talking about….this is from my perspective under the table. 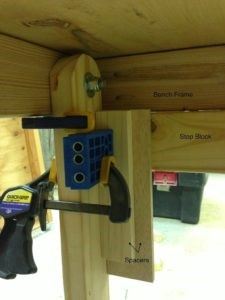 Then here is another once I drilled the pocket and removed the jig and spacers. 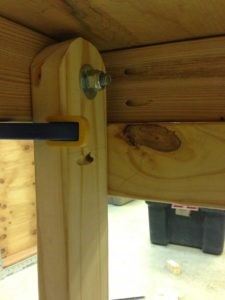 Once I did the same to the other side, I crawled out and took a look. 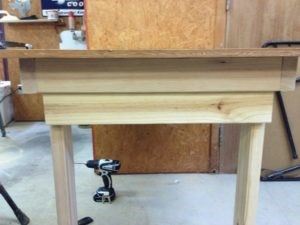 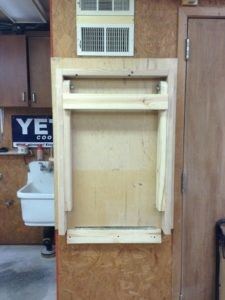 : D….cool. So now when I fold the table out, the legs stop in the exact place every single time and conveniently enough, it also works as a great handle for pulling the bench out.

Last thing to do is create a latch to keep it shut. Even though it’s snug enough to stay shut for pictures, it needed to be secured somehow.

15) My husband suggested using rotating scraps and I thought it would look cool so I grabbed a few more scrapes and screwed them in place. 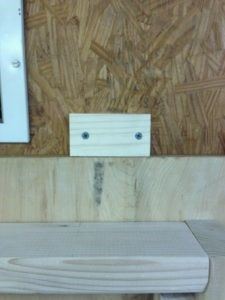 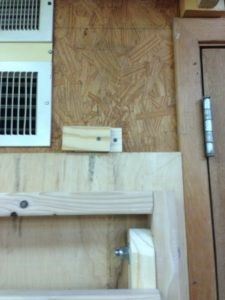 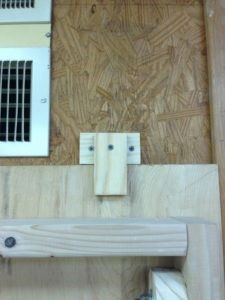 Here is a video of it in action! Yep…for once Cody talked me into standing on a project.

So even though I only had to purchase the 2x4s to build this you can still build one, having to buy everything, for pretty cheap. Buying the 2x4s, hardware, and maybe a 3/4″ sheet of MDF you would be looking at around $21. If you luck into finding a left over from somebody else’s cut then the top board could cost you as little at 50 cents which would cut the cost to about $8, so keep your eyes out the next time you are at the hardware store.

One last detail that has nothing to do with instructions but I still want to share. I know the material I used for the top is a little fancy for a workbench, but my grandfather passed away this last summer and he had this piece of wood in his shop and just never got to do anything with it. So I brought it home and chose to use it on this project because I like having something of his built into my shop. I’m pretty sure he would also love the idea. ; )

Well, like always, just holler if you have any questions! 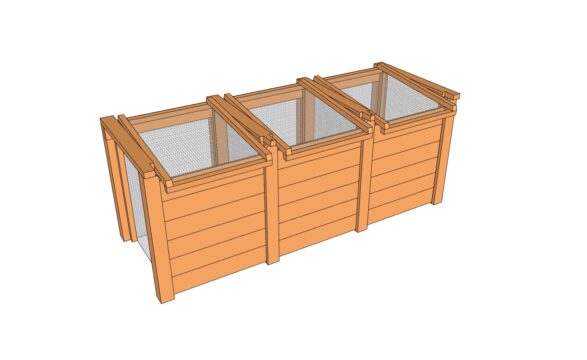 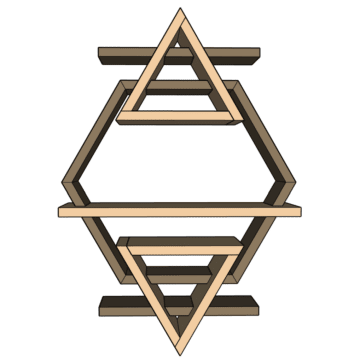