How to Chevron Stripe a Table Top

Alright guys, I know you’re going to think I’ve gone chevron crazy but it’s my friend. I swear. She is updating her playroom and I was recruited to do the furniture….so along with the Chevron Bookcase she also bought a baby blue table, and two yellow chairs and decided that she wanted the chairs painted the terra color and the table to be terra and white with chevron top.

Here is how the table turned out…. 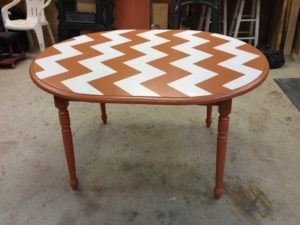 Oh yes…I do like this. : ) Unfortunately I didn’t snag a photo of the chairs before I gave them back to her, but once she sets everything up then I will post more pictures.

So the steps are similar to the bookcase but there were a few new things and tricks in this project so I’m going to write out the steps for ya.

I’m only going to cover the table in this post because the chairs pretty much followed the same steps as the barstools except they started off as painted instead of stained. Since the paint was still in great shape (no pealing or cracking) I was able to leave it on and just go over it.

This table has been painted a light blue and was pealing and cracking in several different places. Since the paint was in rough shape I couldn’t just prime and paint over it because that would be like putting a clean sock over a dirty sock (doesn’t solve the problem). In order to make sure all my work wouldn’t go to waste I would need to remove the paint that was already laid down then start fresh. So that’s where I started.

1) I grabbed some stripper, a plastic scrapper, and a chip brush from Home Depot then made me a set up in my back yard and stripped away the paint.

Note: They sell metal scrappers but don’t use them on wood projects or you could gouge your wood. Also, they make strippers that have lower VOCs but they take longer to work…I went ahead and bought the regular heavy duty stuff and just worked outside.

If you have never worked with stripper before all you do is apply the chemical with your brush and let it sit until you see the paint start to bubble up. I worked in small sections and did just a little bit at a time. Here is a photo of the paint bubbling after letting the stripper set for a couple mins.

2) I wasn’t able to get 100% with the stripper and scraper so after I removed the majority I moved the table inside my shop and removed the rest with sandpaper. (Check out my video on how to unclog your sandpaper)

3) Next I put down two coats of oil based primer then let it sit overnight.

4) So I learned my lesson from doing the bookcase and the next thing I did was paint on my accent color which is white. I put two coats of latex paint on.

Alright…time to lay down my marks to create my chevron stripes. I only wanted the stripes on the table top surface and not on the edge. My measurement of that area is 39 3/4 x 53 1/2 and I have a horizontal line, where a leaf could be inserted, that evenly splits the middle. (That isn’t too important of a fact, but it is something I utilized) I figured out that if I made my stripes 10 1/4 then I could get about 5 full chevrons on my table.

5) So I used a straight edge and my tape measure and laid out all my horizontal lines. Since the top and bottom of my table are round, I actually started from that center line in my table and took my measurements off of it, then used my straight edge to connect my marks. Since I did it this way, I wanted that line to be in the middle of my chevron so I went 5 1/8 north of the line, and 5 1/8 south of the line and you will see in the final product that line is smack dab in the middle of a stripe. After I had those two horizontal lines down, I continued to measure then mark from those (reliable) sources instead of trying to land my tape measure on the round top/bottom surface of the table.

6) Next was to draw in the vertical lines, so first I found center and drew me a straight line right down the center of the table. Now since my width is almost 40″, that gives 20″ per side, so I just measured from my center line and marked every 5″ on both the right and left.

Then. Instead of connecting all my marks, my husband happen to be in my shop and asked me why I don’t just connect my marks. …hmm. Now that’s smart.

7) So instead of drawing the vertical lines, I grabbed a ruler and drew in my diagonals by finding my two marks then just connecting them.

See. Vertical line down the middle which I used as a measuring reference to make my marks but no other lines were needed.

if you only have a straight edge then you would be guessing at what angle to draw in your line. However, if you grab a compass…or is this thing a protractor?….Yep, a protractor….then you can make sure that the line you are drawing in will match the others.

To use it accurately make sure that vertical black line is where the tip of your triangle needs to be, then make sure that cut out is level with your horizontal line. Now look to see where the line falls on the numbers….mine is 45.

Now grab your straight edge and line it up with that black mark and your number but on the other side of the protractor. So I would line up with the black line at the top, then 45 on the numbers and draw my line.

….Wait…that photo doesn’t show you crap since it only has one. haha. Well, you see in the final photo that this method worked. ; )

If you took off your legs, don’t forget to paint those guys as well.

After the paint was dry, I put on three coats of polycrylic. Be sure to wait the recommended 2 hrs between re-applying new coats!