I am throwing a baby shower next month for a girlfriend and was originally thinking of just printing the shower information on a pretty card and mailing them out, but then saw these adorable diaper invitations on Etsy and had to have them.

I have 39 invites, and looking around it was going to cost about $100. I was not willing to pay that much for the invites alone, so I set out to make them myself and found a good picture tutorial here with the template of the diaper invites and everything.

Now for those who read my blog will probably already know that most of my projects require a drill and nail gun, which I’m comfortable with, but tell me to use “cloud scissors and a tag punch” and I’m already lost! So even though her picture instructions might be great for experience scrapbookers, I had to make two before the end result looked presentable. Just in case there are others like me out there that don’t do paper crafts regularly, below are my verbal instructions to go along her picture ones.

1) The side flaps on the template really confused me at first, but leave them on and trace it out on a sheet of paper of your choice. I wanted some pretty design scrapbooking paper, but since all I could find was one sided I opted for plain pink just like the original. 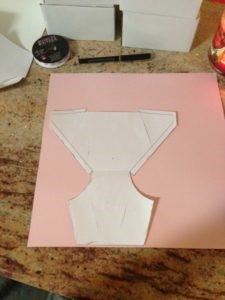 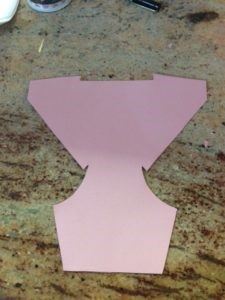 3) Then use your cloud scissors to cut where those flaps are. Both along the sides and the top of the invite, then go along the bottom with them as well. Now I took the white template and laid it over the pink one and used an exacto knife to make my two slits there at the bottom. Then I folded up the bottom and made a crease, then did the same to the side ‘wings’.

4) Next I wanted to make the inside information portion. I typed out what wording I wanted and was able to put two to a page. Then using the inside template I had just cut, I laid it over the wording until it looked good then traced. 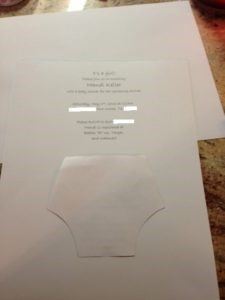 Tip: A quick tip for ya on cutting these. I traced out one page then took and laid it on top of a page without the trace then cut them together. This way I was getting four for two traces and believe me, this is a time consuming project so anywhere to save time is awesome.
5) I printed the wording for the diaper raffle insert then use my cloud scissors to cut it out.
6) Now I just glued the two inserts in their spots, then went back with a pink gel roller pen and went over a couple words to add some color. 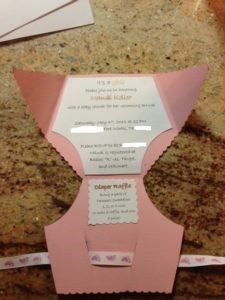 7) Feed a cute ribbon through and make a pretty bow. 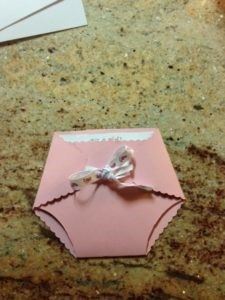 Yes…that is my attempt at a pretty bow. I know, it’s sad, but my talents do not lay in bow making.
This is not a fast project! There is a ton of tracing and cutting and I would recommend getting at least two friends to help out so you could get an assembly line going. I did everything in steps. So I traced all 39, then cut all 39, then ‘clouded’ all 39 and etc….and it took me about 8 hours doing it by myself.
I ended up leaving off the tag on the front because it would have required printing, clouding, pink gelling, then attaching…and to be honest, I was ready to be done! : ) But they are cute huh??
Total Time: 8 hrs
Total Cost: $38
**Update**
Click here for the diaper template
Click here for the inside template