Small Sitting Stool for a Porch or Entryway

Ah I just went on a big trip! I was invited to go to Cologne Germany to attend the International Hardware Fair with the Triton Tools booth. I am sponsored by Triton Tools and was delighted/excited/nervous about the opportunity. The booth had a demo room that was like an aquarium. : ) Two other woodworkers and I would take turns rotating in the demo room and build something using the tools so people walking around could see them in action. My parents have been wanting a simple stool they saw online to place on their front porch so they could have a spot to sit down and take off their shoes, before entering the house, so I decided to make that my project for my turn inside the aquarium. Below is a tutorial outlining how to build the stool if you would like to build your own. I also have a free set of plans available for this project!

For this project I am going to be using all 1″ x 12″ boards. I worked it out so that three 8′ boards could build two stools. So if you are wanting to make a few DIY gifts for Mother’s Day presents (coming up!) then buy three boards and build two at the same time. I’m using cedar boards because the stool will be placed outside and cedar is naturally rot resistant.

Since I am practicing building this stool for my trip, I am only using the tools that I will have available at the show. So instead of using a miter saw to break down my boards, I am going to be using the Triton SuperJaws and the track saw. If you don’t have a miter saw or track saw then an alternative would be to use a circular saw. 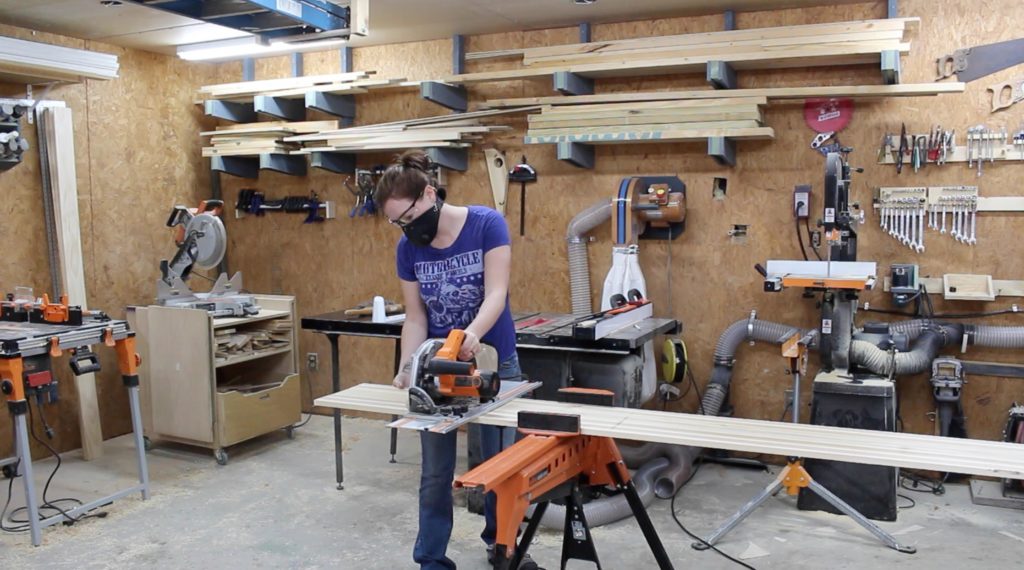 Note: I am wearing a dust mask made by RZ Mask, it is the M2 model. If you want to purchase one then you can click here: https://goo.gl/khpGiA This project was sponsored by RZ Mask and they were awesome enough to put together a promotion where if you use the code “April” at checkout then you will receive three free filters with your purchase of a mask!

I took the two boards that will eventually be the ends/legs and butted them end to end, then I grabbed something in my shop that had a 5″ diameter, in my case it happen to be a roll of tape. I set it in the middle, and traced around it using a pencil. This creates a simi circle on end end board which I then used a jigsaw to cut out. 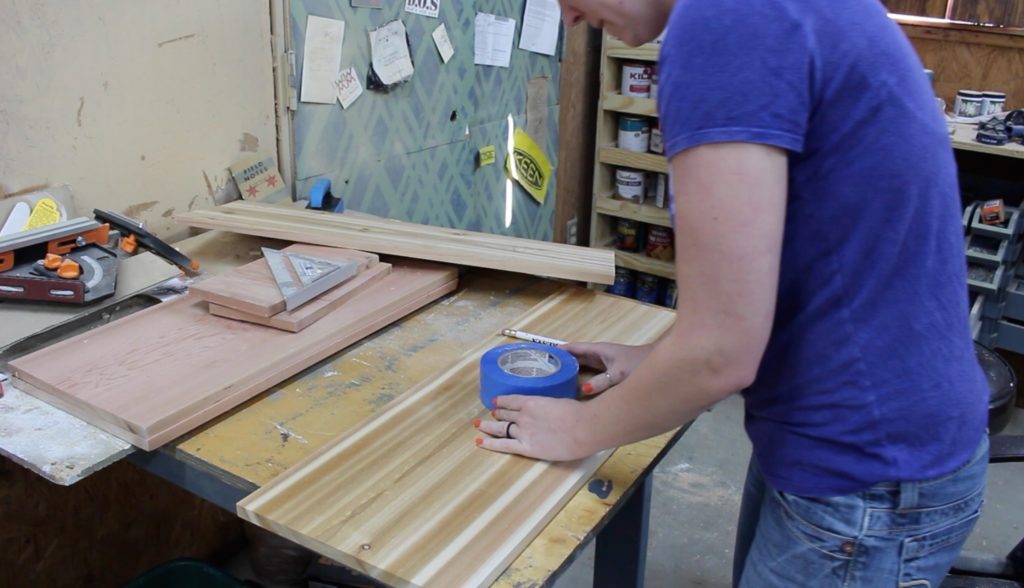 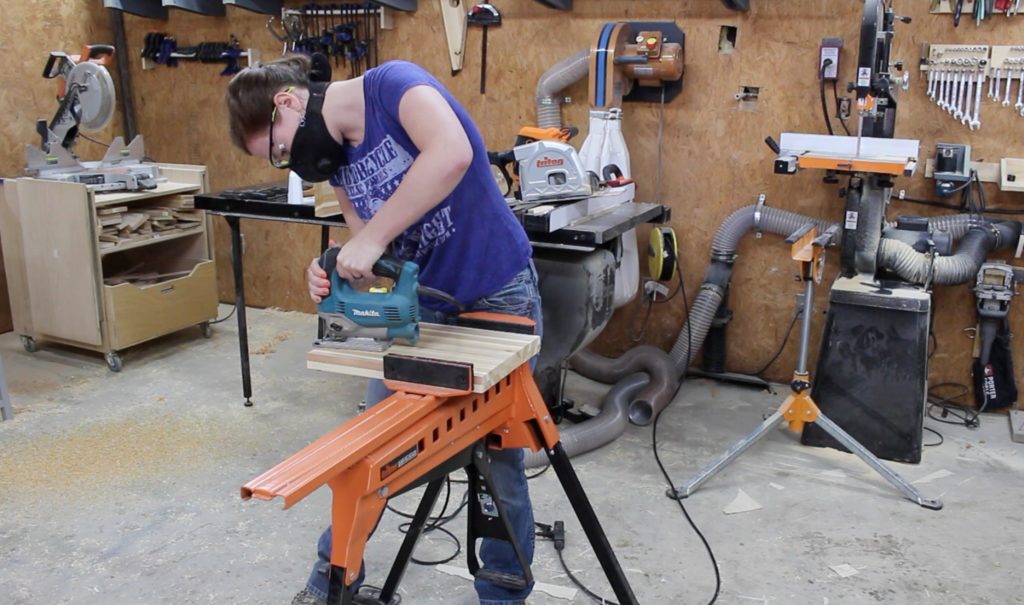 For joining things together I am going to be using dados, however if you are not comfortable using dados, you could use glue and a butt joint or even glue and screws.

I took the fence that comes with the Workcentre table saw attachment and used it on the router table attachment to cut my dados. I also used the miter gauge to give the material more support as I was pushing my material through. Note: If you don’t have a router table an alternative would be to use a dado stack in a table saw, or to use a regular single blade but make multiple passes.

Since the dados on the legs are identical to each other I would make one pass on one of the legs then grab the other leg and make the same pass on it. Next, I would move the fence over to increase the dado to 5/8″ then run both of the pieces through again. You can do the same for the two shelf pieces since they are identical as well.

For the top, set your fence then make a pass on one end then flip the board around and make the same pass on the other. Move the fence to increase the dado width then repeat. 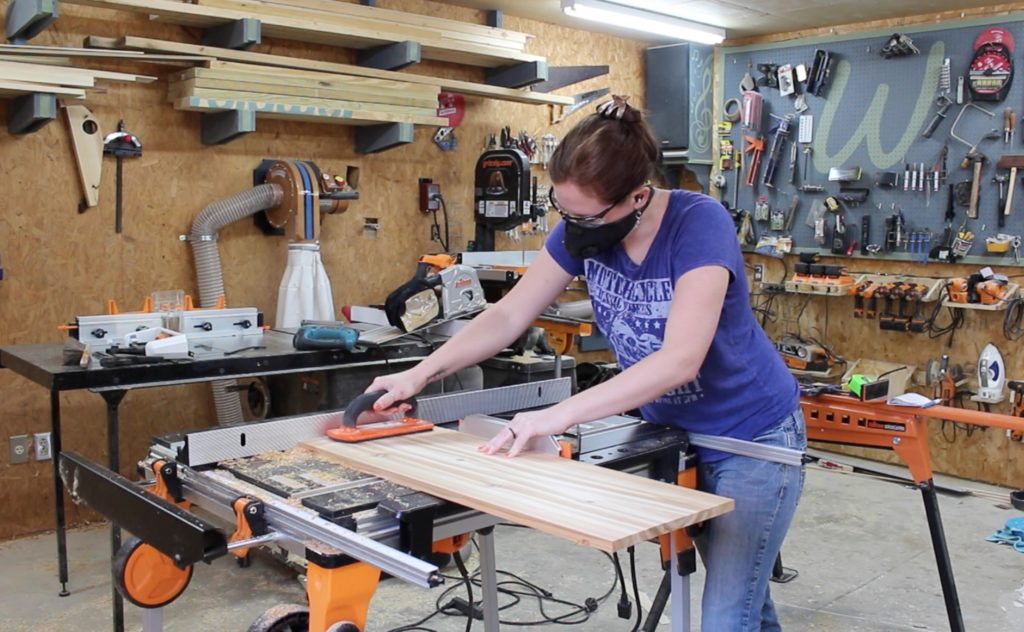 With all the dados cut now I started assembling the stool. Use glue in all of the dados and I would suggest by starting off with putting the two shelf pieces into the legs first. Then attaching the second side, then attaching the top. 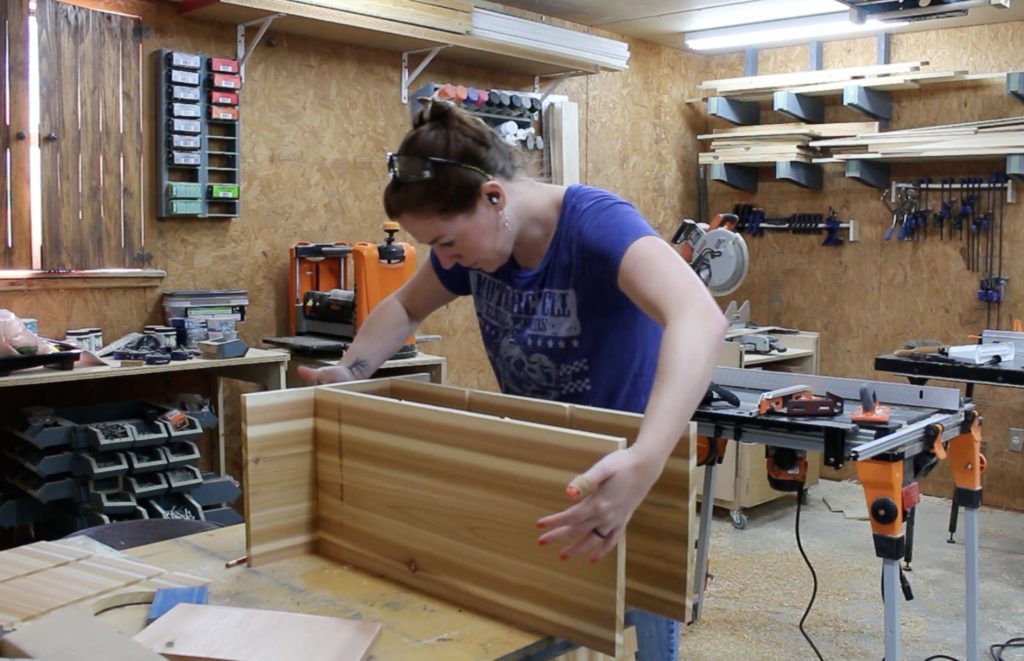 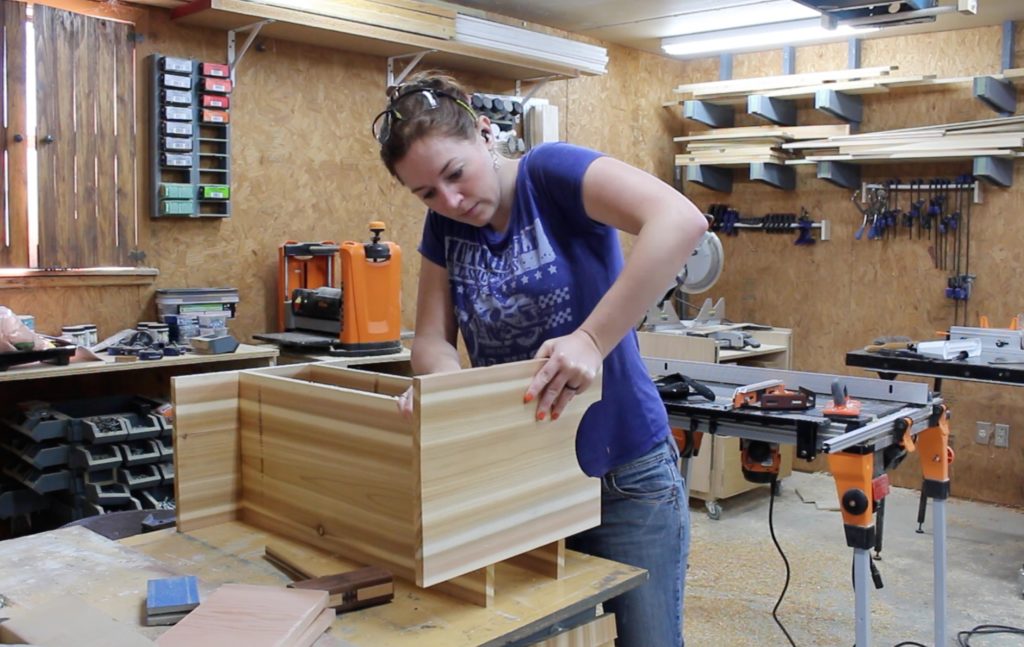 I intentionally did not cut the vertical dividers until the very end so that I could get their height exact. So once the stool was assembled I took a measurement from the bottom dado to the top and used the table saw attachment to cut my boards to height. I then glued and slide these into place. 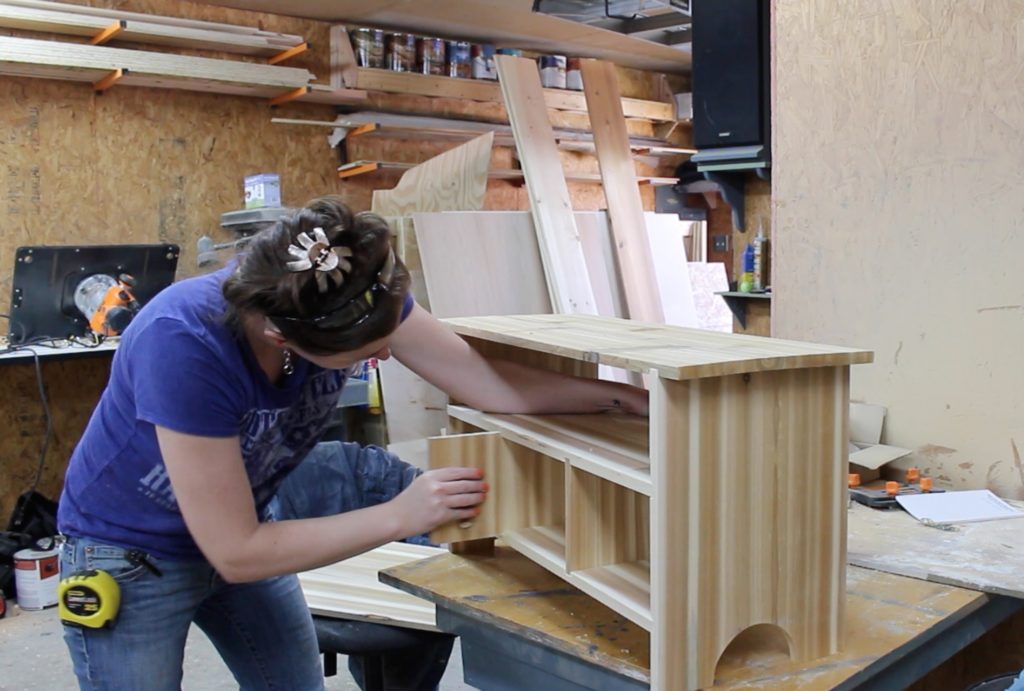 While everything was drying, I attached clamps to keep everything in place. This is pretty tricky and kinda gets crowded. So a few alternatives you can do if you don’t want to mess with clamps is use a brad nailer to tack things in place while the glue dries or you can use screws and use plugs to hid them.

The last thing I did was cut two additional pieces with the table saw attachment to attach to the front and back of the stool to give it more detail. I cut both of the sides of these pieces at an angle with a jigsaw. Next I glued and clamped these into place then let it dry. Again, you could use brad nails to tack it into place if you want to skip using clamps. 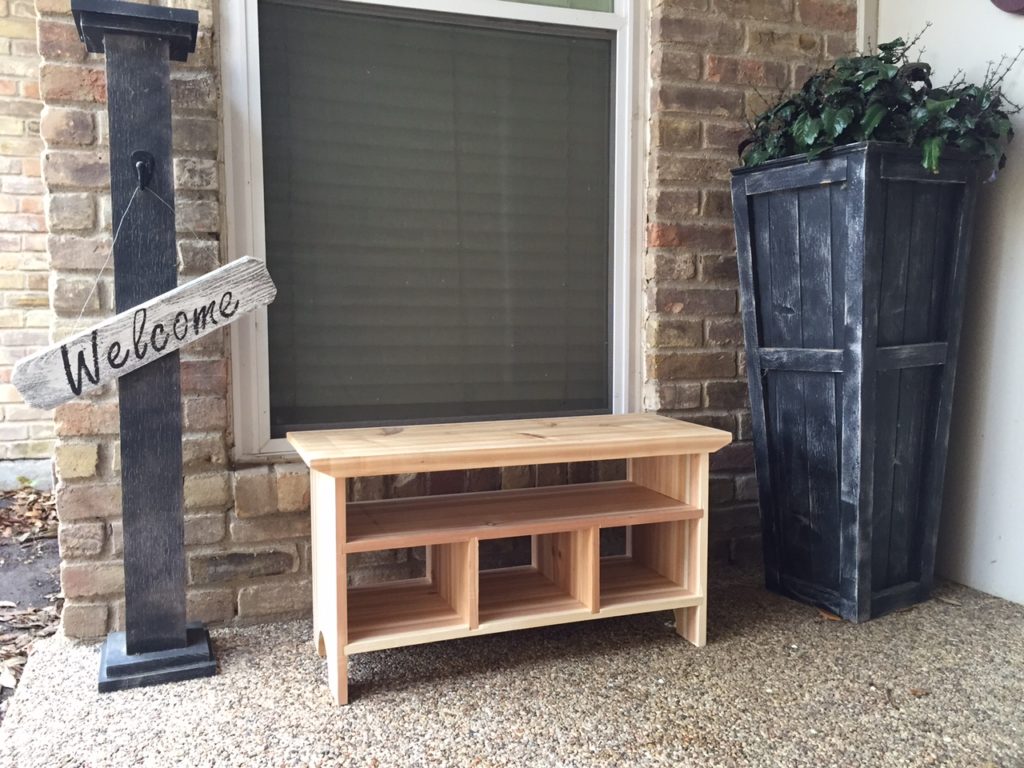 And that’s it! You can apply whichever finish you prefer then set it in place. I used teak oil because it’s made for dense wood. I applied three coats, waiting a day in between coats. 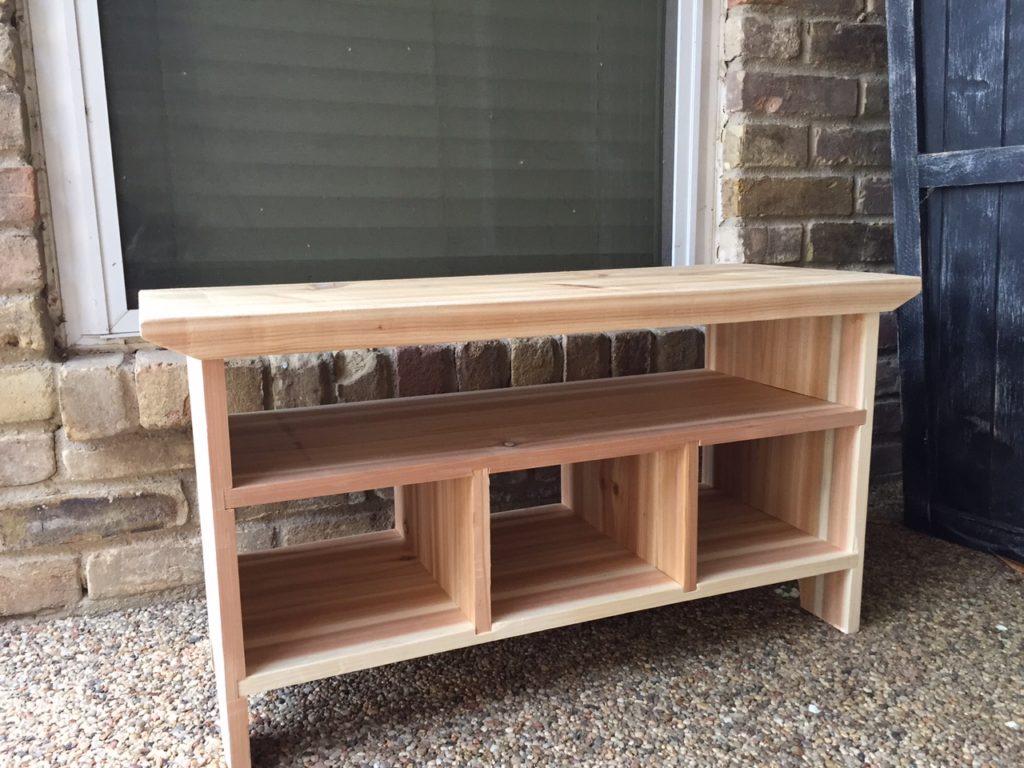 This is a simple project that can be built in just a few hours. I think it would look cute on a back or front porch or even entryway. However, since it’s so simple to make, I think it would also be a good project to make a few and sell or give away as gifts. : ) Remember I have a set of plans if you are interested. 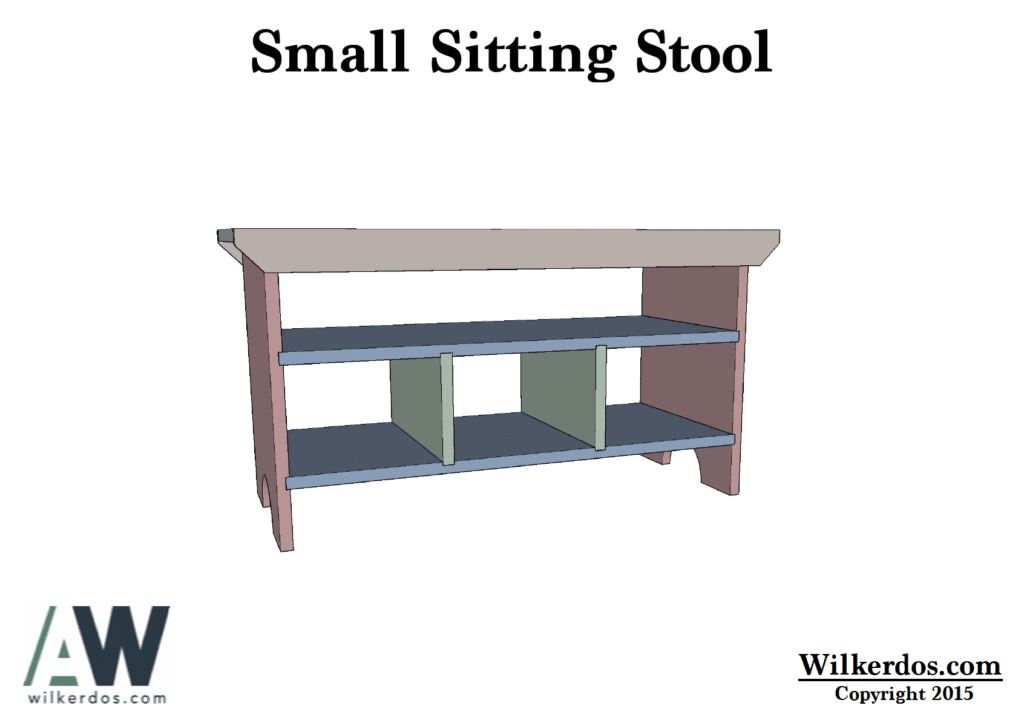 Since I used cedar for this project it was a little pricey, it cost me $54 for the two boards. If you wanted to save some money you could buy pine boards instead.