In two previous videos I have shown how I built two different gates for my property. One to the house, and one to the shop. This tutorial/video shows how I got them both installed, which was a pretty big ordeal as they are both large and heavy.

The location of the gate is pushed off the road so that an entire truck and trailer can pull completely into the driveway, off the road, before hitting the gate. 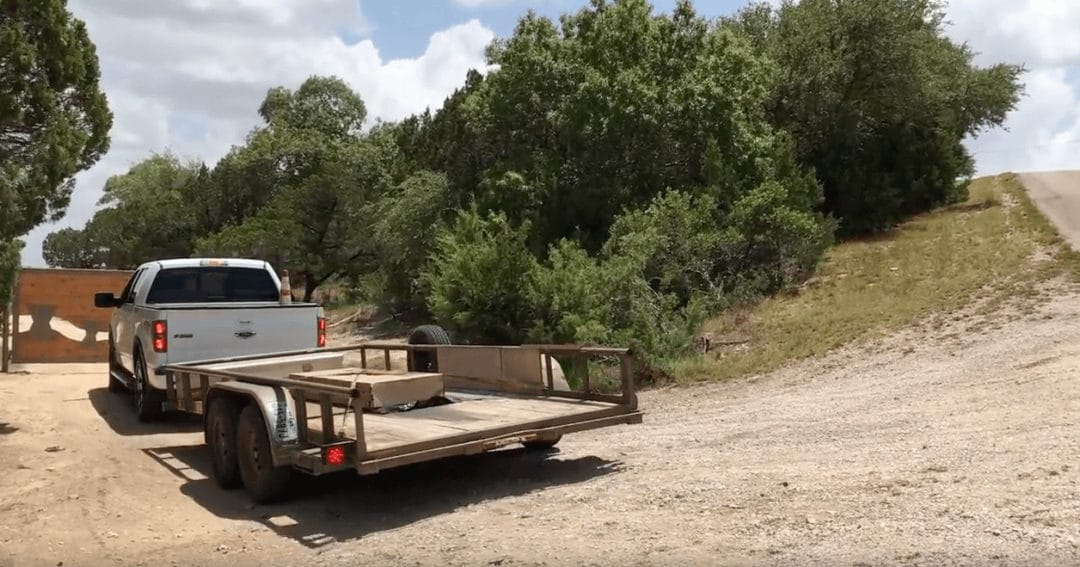 Also, before punching the holes in the ground, I waited until I built the frame for the gates so I could get an exact measurement on how far apart these holes needed to be. They need to be pretty accurate because you only have a few inches of play in both directions. And since I live on solid rock, I had to hire a contractor with a rock auger bit to punch all eight holes.

I started by mixing up concrete and setting up the main posts that the gate will be hinged to, as well as the two sub-posts. All of these posts are left tall at this point and will be cut to their final size after the gate is installed. We made sure all of the posts stayed plumb while they were curing. 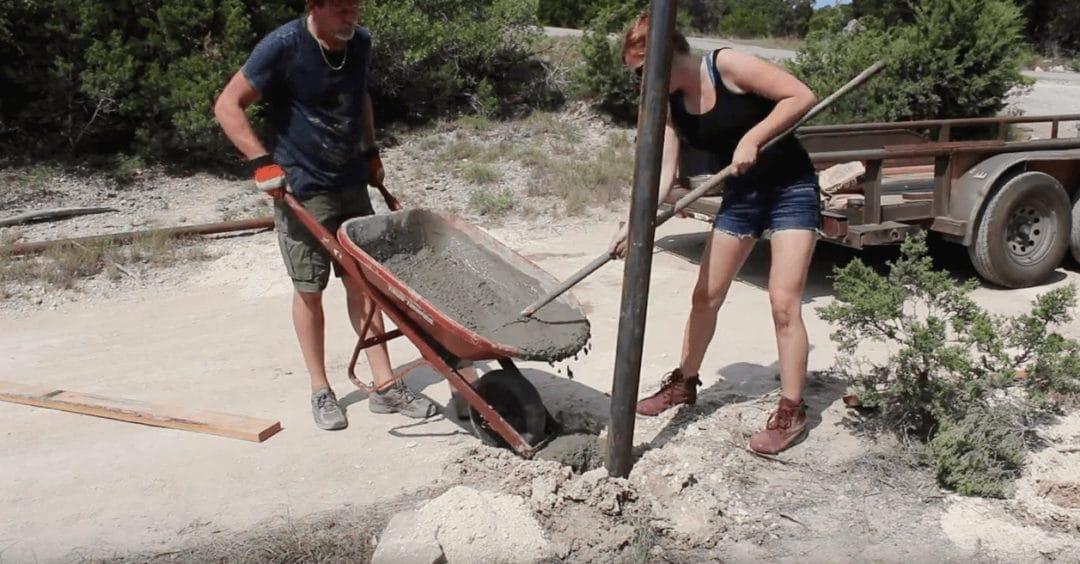 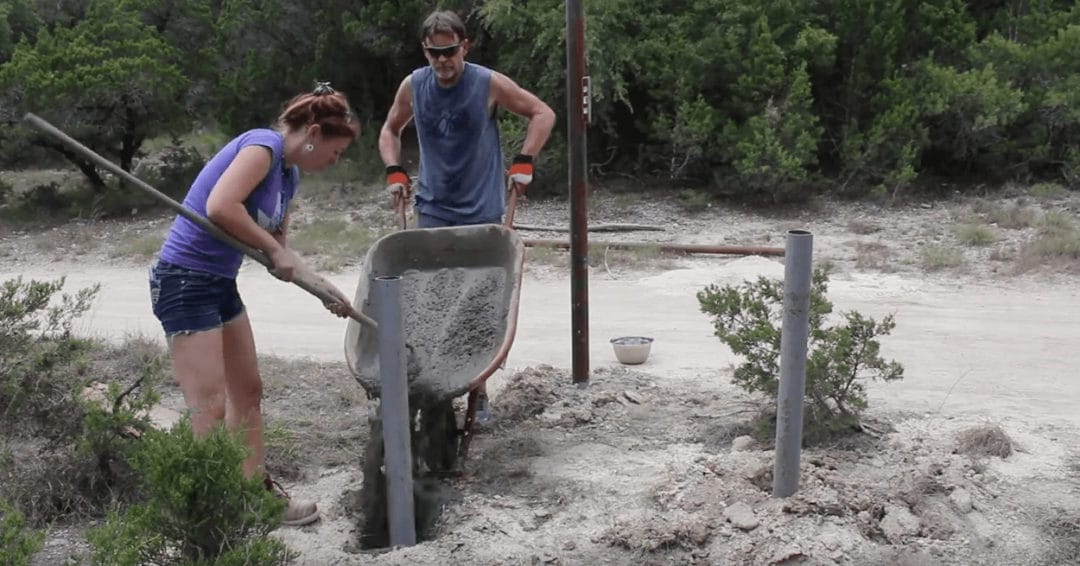 For the stringers, I used a smaller diameter pipe. To butt up flush to each other, the ends of these stringers need to be profiled. Cody found this awesome free software online where you can type in the angle and diameter of your pipe and it will spit out a printed template that you can cut out, wrap it around your pipe and trace it to cut. I used my Tomahawk 375 Plasma Cutter to make these cuts.

The main thing to pay attention to here is that you want the profiles to line up to one another. The center of the dip on one end is center with the dip on the other end. We then put the stringers in place to test the fit. And then took off a little bit here and there with a grinder until both sides rested snugly.

I then used a grinder to clean up the posts at the welding point to get a nice weld. And then welded them in place by hooking up a generator to my Lincoln Electric MP210 machine. 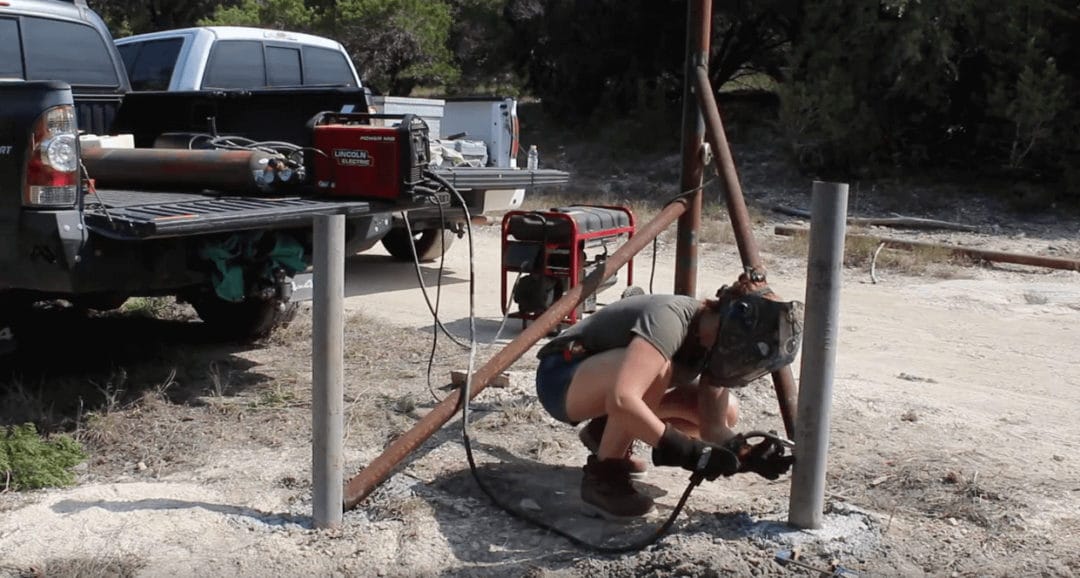 The angles of these stringers were chosen because the bottom of these posts is the most secure, being knee deep in concrete. However, the higher up you go, the easier it is to pull the post over. So, you want the stringer placement up high on the post to provide as much support as you can get. 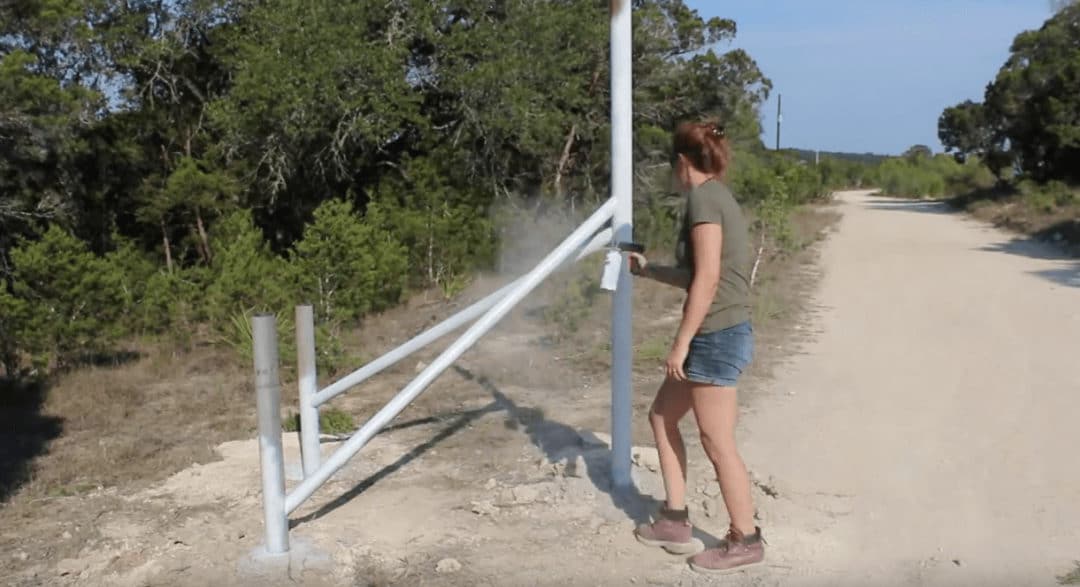 Moving on to the mounting the gates. We started off with the shop gate. I pulled a straight line down the middle on the hinge side of the gate. And another down the center of the hinges. It’s worth noting that these hinges are rated for 700 lbs. Which is well above what this gate weighs.

We first set a 4’ level on the gate to get it plumb. And then placed the hinge in its spot to get it plumb with a smaller level, using a magnet as a resting shelf.

After getting the hinge where I thought I liked it, I tacked it in place and then welded it shut.

We then used the 4’ level to span from the top hinges down to the bottom hinge to make sure they were on the exact same line. It’s really important to take your time on this step so that the hinges wont get bound up by being misaligned.

Ok, now time to get the gate down to the entrance to weld on the second part of the hinges. Cody wrapped a strap all the way around the gate and lifted it up with the tractor to move it, which worked beautifully. We moved slowly down the driveway so that Brian could keep the gate steady. And then they slowly crept up to the gate to set it in place. 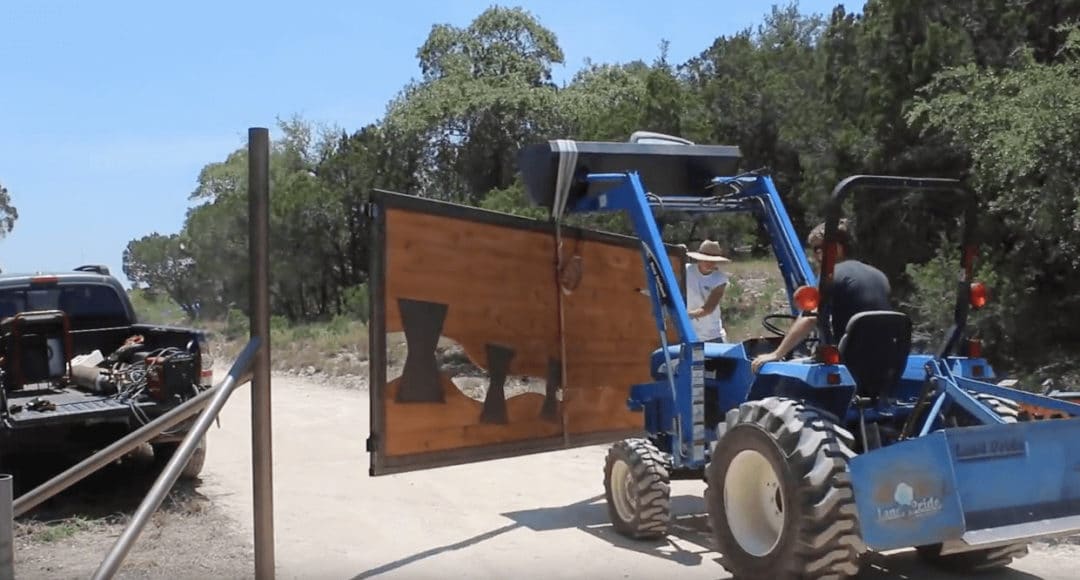 We piled scrap wood on one side and a floor jack on the other to prop up the gate to the height we wanted the gate to be. We then put a level on the gate and then used the jack to raise or lower the gate into level. Once the gate was level, we then scooted the gate into the posts until both of the hinges were resting flat up against the posts. 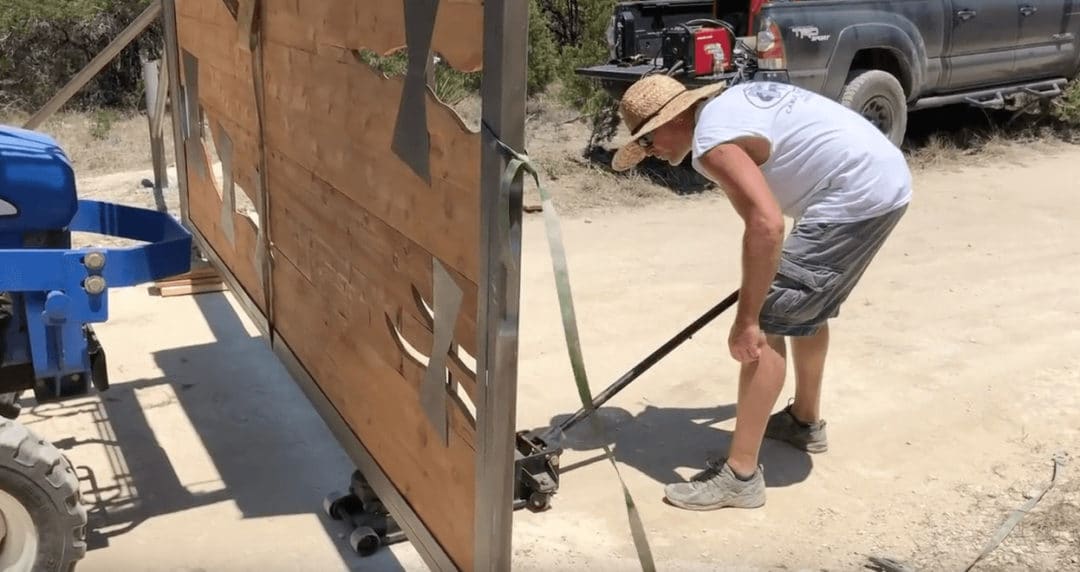 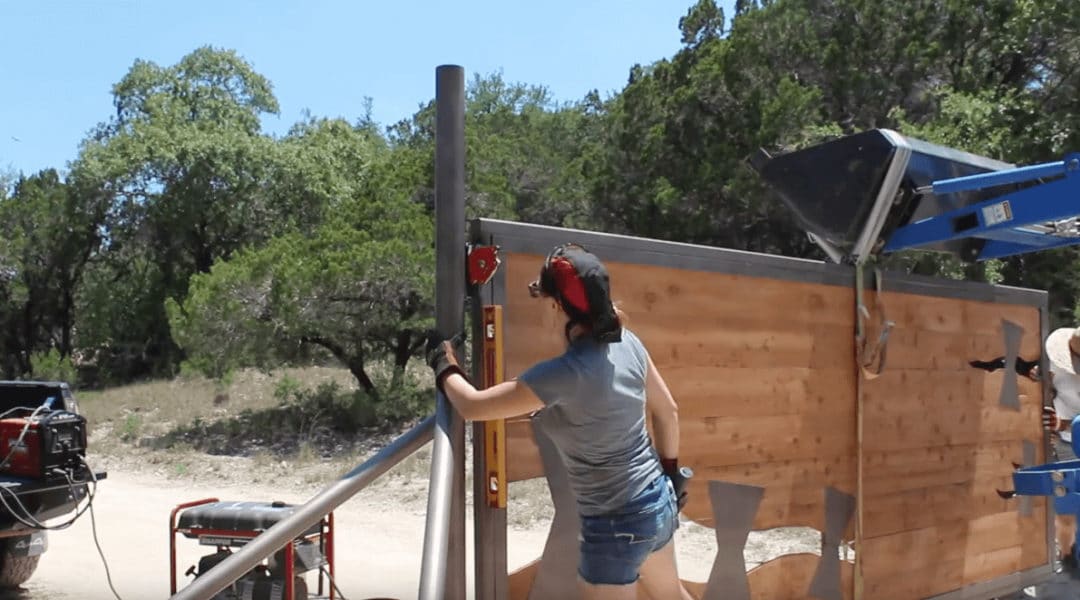 Now using a magnet, I attached the second part of the hinge. We then used a level to make the gate completely plumb. I tacked the hinges in place. And then we again checked level and plumb before I welded them closed.

And the moment of truth: We were able to let off the tractor and the jack and open it up to see if it worked. And it looked great. We celebrated with a happy dance. 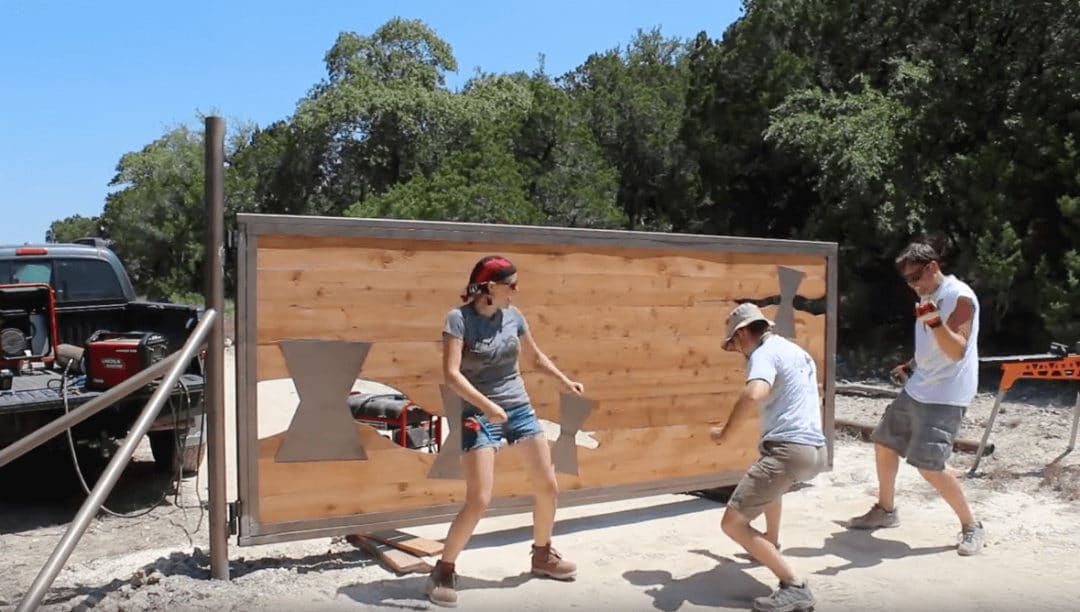 Now that the gate is installed, the second main post can be set. You want to wait until the gate is in so you have a little play over the amount of space between your second main post and the gate. I mixed up a little more concrete and set the second post, leaving about an inch gap. The post came out super nice and plumb, with a super nice and even gap. 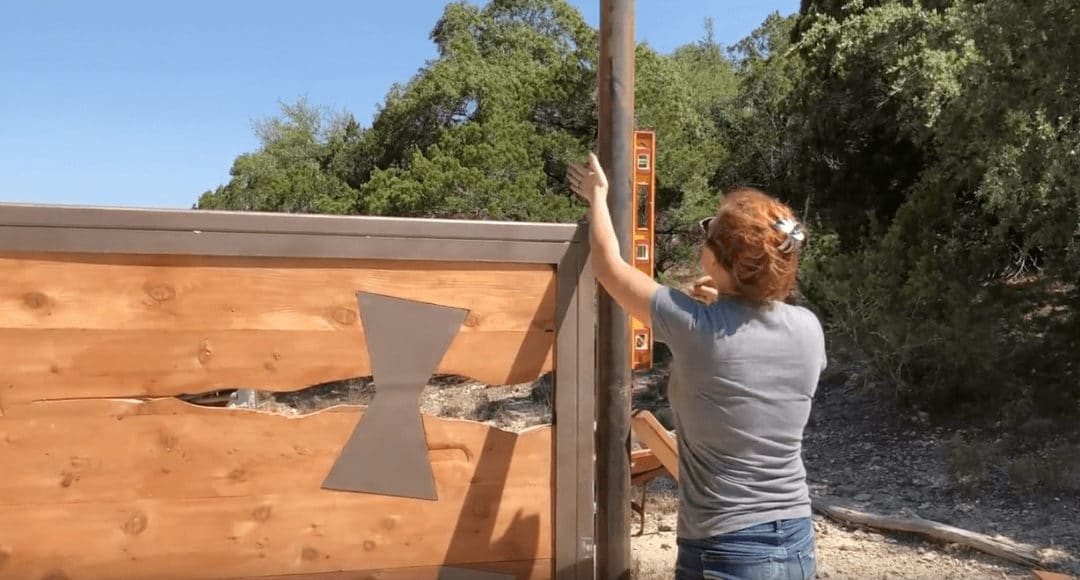 Next up was installing the other gate leading to the house. We repeated almost all of the previous steps with just a few differences. One difference was in the stringers that attach the sub-poles to the main poles. This time, we welded them on horizontal instead of at such a steep angle like the ones for the first shop gate. I personally think it looks way cleaner keeping them horizontal. 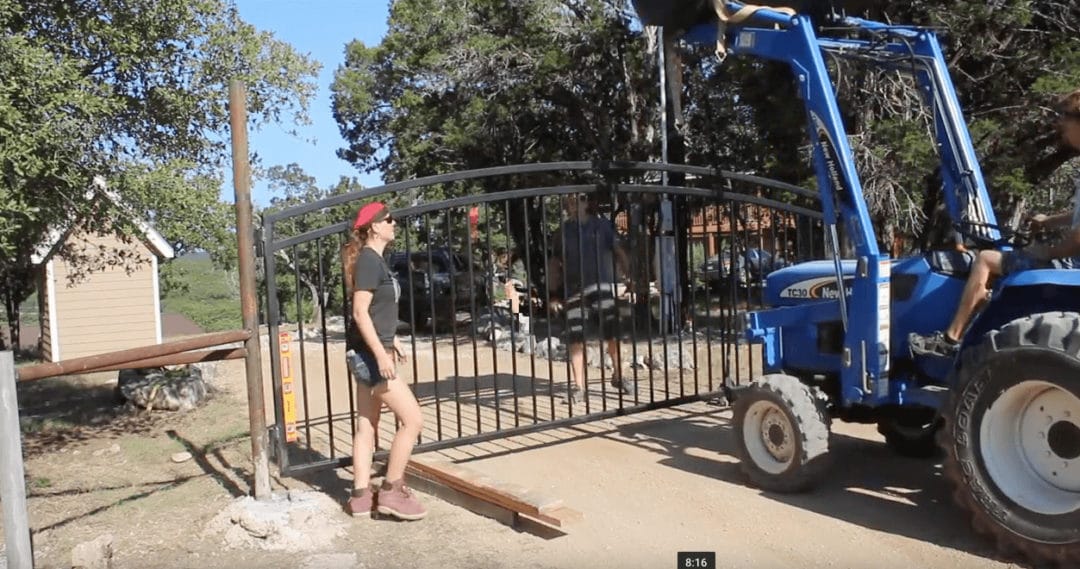 We plan to add concrete to this driveway in the future, which will require an additional 4 inches of room underneath the gate. So to account for this, we mounted this gate higher (8 inches in the air) than the other gate.

After we got the gate welded on, we once again had that really cool moment where we were able to back off of everything and watch the gate open and close for the very first time. There’s something really cool about building something so huge and then seeing it function and operate. 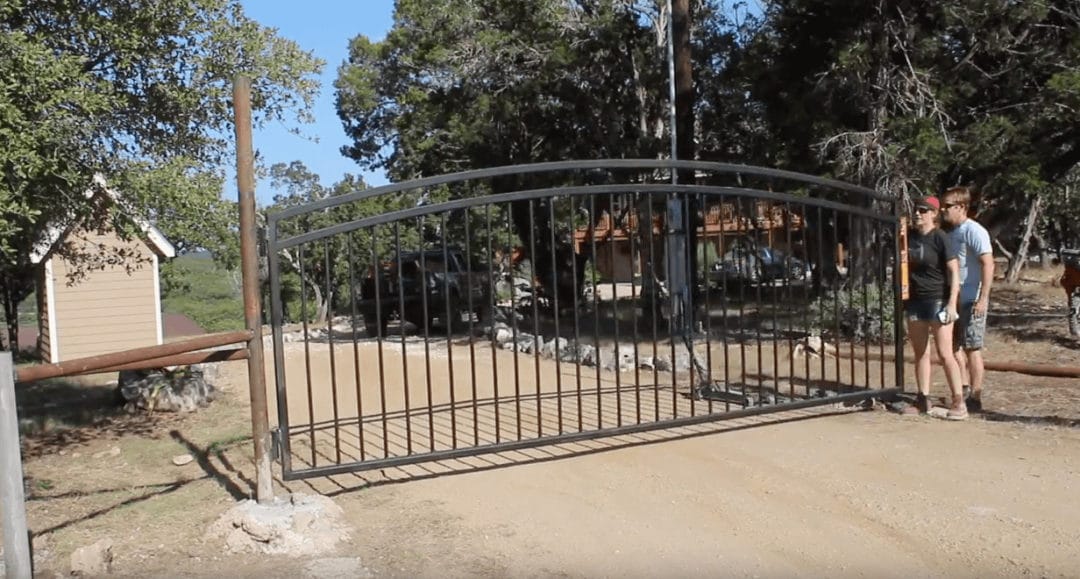 To finish up I cut all of the posts to their final height. I cut the main posts to be about level with the gate itself.  I primed and painted all of the poles and did some touch up paint on the gate where needed. Since I had two bags of concrete left over, I went ahead and filled up both of the main posts that the gates are hinged to. Then to cap off the posts, I ordered some 3 1/2” post caps that are domed on the top that will just slip right over the posts. 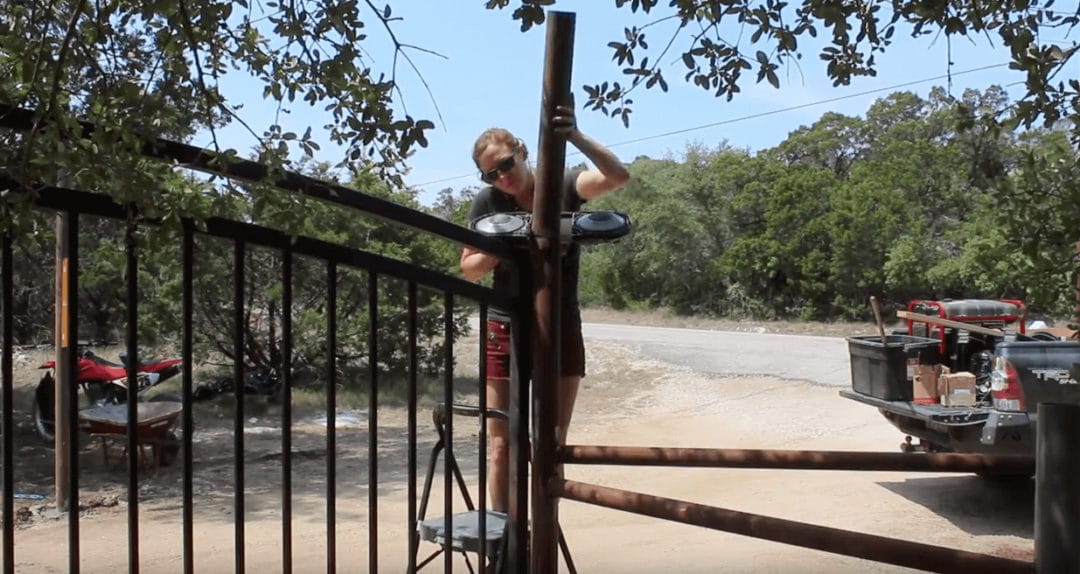 The very last thing I did was cut out a small metal flap and welded it to the back of each gate so it will reach out and grab that main post and keep the gate from swinging past it.

I don’t know what it would cost to have these gates built. But I can tell you that we only spent about $1200.00 between both gates. We still need to buy the actuators. But I can still guarantee that is a lot of money saved since I built the gates myself.