Installing a Mini Split AC/Heating System in the Shop

This was such a cool week in my shop, and I mean that very literally as I got AC installed.

Temperatures in Texas get hot hot hot during the summer and with as much as I’m in the shop, an AC system is an absolute must. I went ahead and filmed the process of the installation even though I didn’t install the unit myself (I’ll cover why later on). So in this tutorial, I’ll cover why I went with the unit I did and give you an overview of the process so you can kinda know what to expect if you’re looking into doing the same.

I partnered up with two companies for this project so I want to say a big thank you for Carrier Systems and Mini Split King for sponsoring this video.

The first step in the process was to figure out how big of a unit I would need for my space. The factors that play into this are the square footage of the space, how high the ceilings are, R-value of the R-value of my walls, ceiling, windows, and garage doors. When the AC guys ran the numbers they came back and told me I pretty much built a yeti cooler and I would only need a two ton unit to heat and cool the entire space.

And if you recall the video when the spray foam was being added, I mentioned that even though it’s more expensive up front it is so effective that it saves on the heating/cooling step and this is a great example of that in play.

Now Carrier has a large range of mini splits able to handle anything from a garage to a house to a shop the size of a house. ; ) I’m going with 2 one ton units that are, by far, the most efficient unit on the market with a SEER rating of 42.

One huge advantage to going with a mini split is it’s a ductless unit, meaning instead of having to run traditional ducting in the attic to distribute the air, it only requires an outside unit called a condenser, then a hole in the wall to connect that to the inside unit called the air handler.

I’ll have one placed on the back wall of each section of my shop so that I can either have both running to heat or cool the entire space, or once I install a bay door in between the two sides of my shop, I can have the option to only heat or cool the side of the shop I’m currently working on. The cooling will be amazing for Texas but it’s worth noting this unit can heat with temps down to -22 outside.

The unit comes with a mounting bracket on the back that can be removed then placed level on the wall. Since this is my woodshop, the guys mounted my unit up pretty high on the wall to keep it away from as much sawdust as possible, although it will still get dust pulled into the filter and need to be cleaned regularly.

Then they punched a hole through my sheathing which will allow the plumbing of the unit to be fed into the wall and down to another hole that will lead to the outside unit. Although the air handler is about ____ x _____ you can see it is pretty light weight.

With the unit securely in place, he next started routing the communication wire which will allow the inside unit to talk to the outside unit.

***A few other features built into this unit is a dehumidification function: Unlike the dry function on regular mini splits this is the only system in the market with a true dehumidifier function built in that will not over cool the space trying to remove humidity. This is great for Wood shops. It has wifi so I can control the unit from my phone annnnd it has a sensor a sensor on the bottom right that you can set to follow you around the shop and direct the vents towards your location. 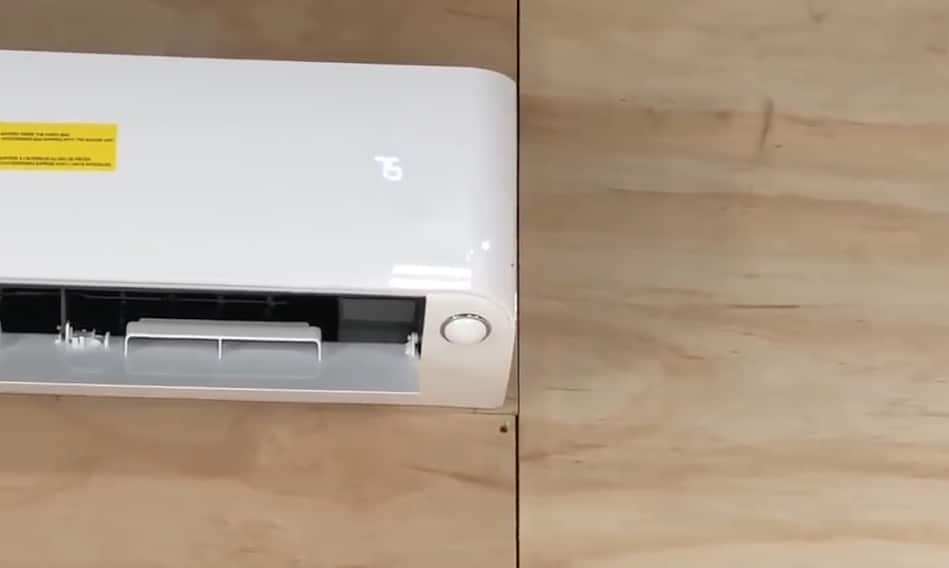 You can see with the door of the unit open, you can see the filters. With this being in a shop, it’s recommended that I clean the filters out once a week. Cleaning will mean slipping them out (which is simple enough), dunking them in some water, then letting them air dry. Another preventative measure I took since this is a shop is I attached a layer of roll out filter on top of the intake of the unit to catch a lot of the dust before it enters into the internal filters.

Next up was to drill a hole in the bottom of the wall all the way to the outside unit. To keep the outside of the wall from tearing out, Joe started from the inside until the center bit of the holes punched through the outside sheathing. Then he moved to the outside and finished the cut. This hole will be where the interconnecting refrigerant, control and drain lines will be ran through to the condenser.

Once ran these lines can be cut to their proper length and attached, then also tidied up so they fit snugly back into the wall channel.

All in all the inside install took about an hour to an hour in a half. And before you ask, yes it is simple enough to install yourself however there are two key factors on why it’s still a good idea to hire the job out. One is if you buy a unit direct and install it yourself, you won’t get a warranty through the manufacture. If you go through a certified HVAC contractor your unit will have a ten year warranty attached to it, and often the installers will also have some sort of warranty. Mini Spilt Kings offer a two year service warranty when they do a job, so that’s a huge reason to hire the job out. The second reason, I’ll get into in just a second after I show the installation of the outside condenser.

The condenser can be set on the ground on a concrete slab or mounted to the wall. Since I still have some grading to do, I chose to mount mine to the side of my shop, about waist height.

A bracket is placed level on the side of the building where two arms are attached. Then the unit can be set into place and secured down. You can see it’s relatively light weight where one person can lift it.

Next the lines coming out from the inside of the shop can be cut to length and attached to the condenser.

And now comes in point two on why hiring out the install is a good idea. Before adding refrigerate, the system got pressurized with nitrogen to check for leaks and then bled out so that they could connect a vacuum pump that draws out all the air and humidity from the lines.

If this step is skipped then the moisture that is in the lines will always remain in the unit and attach to different parts inside causing corrosion and premature wear and tear on the unit. Once the micron gauge gets to at least 500 microns then the refrigerant can be released throughout the unit, and that means it’s ready to be turned on.

I then went inside the shop and closed the doors and lowered my garage doors. By the way, having these new Wayne Dalton garage doors closed is just as bright as having them open thanks to all the windows. I’m so thrilled with how much natural light they let in. 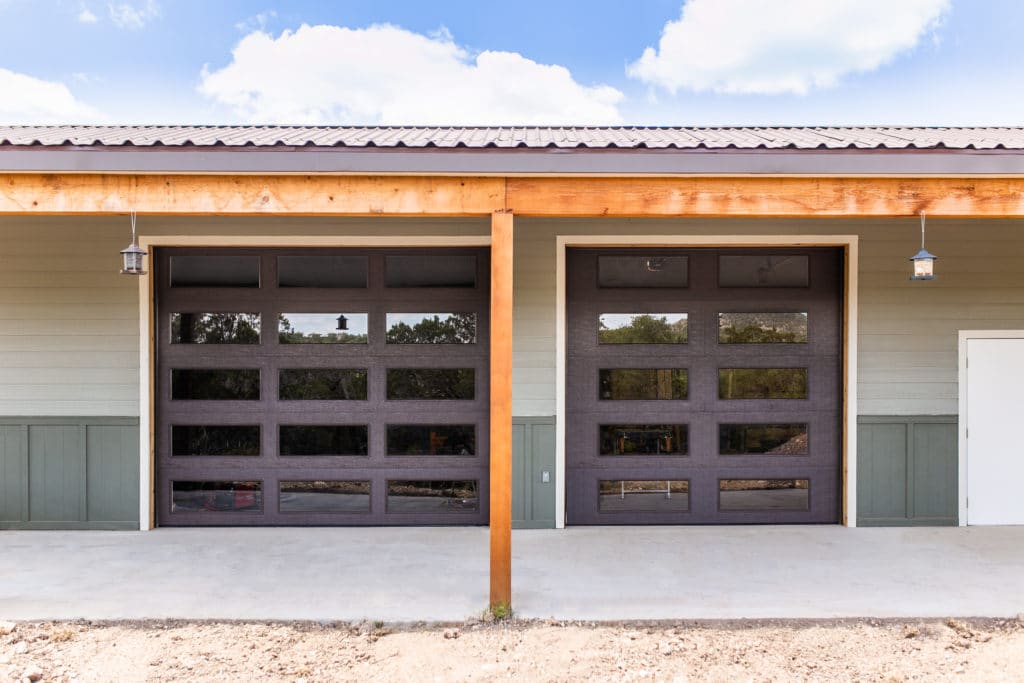 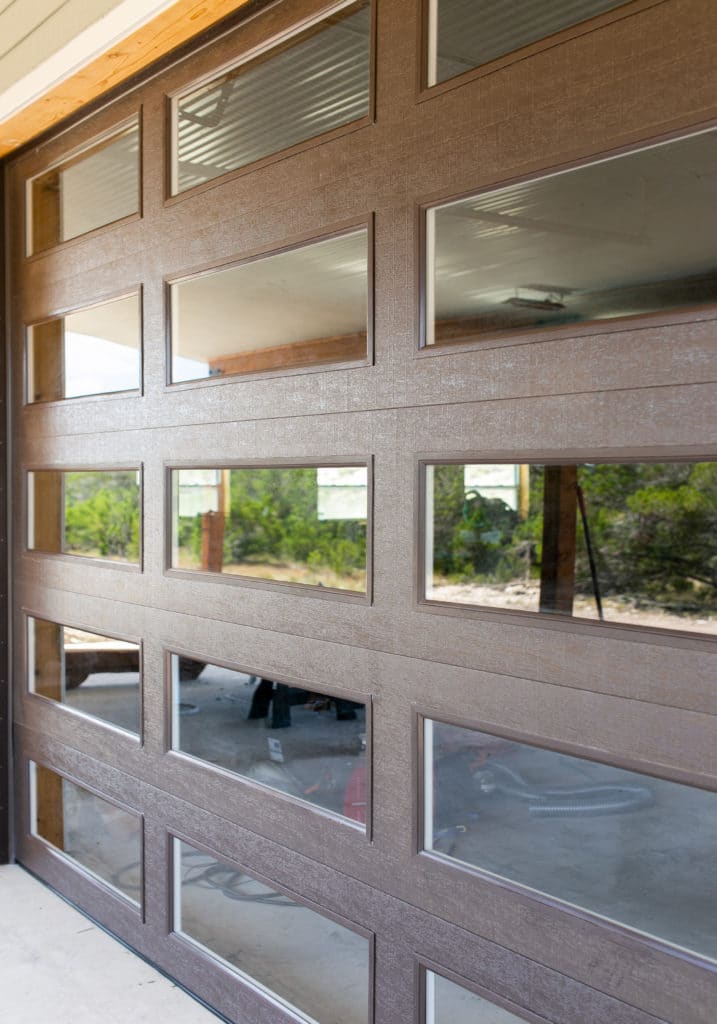 With the shop closed up I then powered both air handlers up to full blast! And goodness me, are these things quiet!

I turned them on turbo since this is the first time cooling the space, so this is the loudest it will ever be…..which is pretty dang quiet if you ask me. Check out the video above and see.

For finishing details, the guys added in a surge protector so that this $60 protector will need to be replaced instead of the entire unit. I also used some Titebond Weather Master Sealant to caulk around the hole put into the shop then last thing was to replace the inside panels of my shop wall. 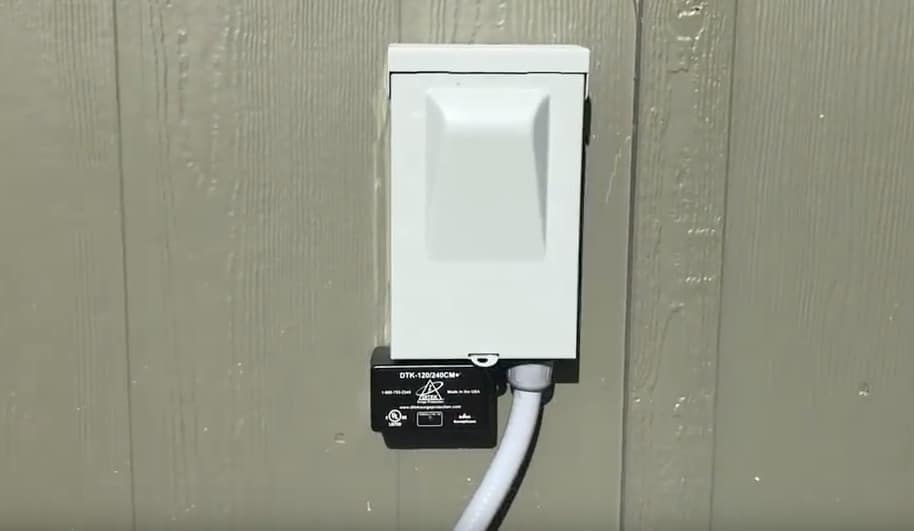 I just want to quickly point out, this is exactly why I went the long route of using screws over a nail gun to sheath the inside! It hasn’t even been a year and I’ve removed a few panels here or there to get inside the walls for some reason or another. So I recommend doing the same if you build or have something built.

Ok and that about wraps it up. Having an heat and cooled space is going to be simply amazing. Again, big thank you to Carrier and Mini Split Kings for working with me and sponsoring this project.

Here is a link to the units in case you’d like to check them out https://www.carrier.com/residential/en/us/products/ductless-systems/38mpra/