I have 16 lights total in my shop but over the past year one by one have been going out to where I have only been working with four or five here recently. (Which is why some shots in my videos have been really dark) So I decided to take the time and replace my shop lights. Since I was having to do it anyways I also decided to upgrade to T8 bulbs instead of T12.

The difference between the T12 and T8 is the T8s are smaller and more efficient. But if you are worried that means they aren’t as bright, don’t be. I was shocked at how much light just one fixture (two bulbs) put off. In fact, I went from having 16 T12 fixtures down to having seven T8 fixtures.

Here is a video I put together on the process:

The first thing to do when working with electricity is to find the breaker and make sure it’s turned off. I do this by turning all of the lights on (the ones that work) and then flipping the breakers until they all go off.

Next I took out the light bulbs and the housing inside the fixture that covers the wires. Now, I’m real cautious around electricity and since most of these lights don’t work, I couldn’t guarantee the breaker they were on, so I double checked each fixture before starting to mess with it. I did this with a multimeter. Turn the knob to the first setting after the off switch, this is telling the meter to read Volts in Alternating Current (Direct Current would be the next setting). Then take the two leads of the meter and place one inside the wire nut of the black wire and the other inside the wire nut of the white wires. Your meter will not read exactly zero but if it is around 2-10 MV (which means millivolts) you are good to go, this means the wires will not shock you. 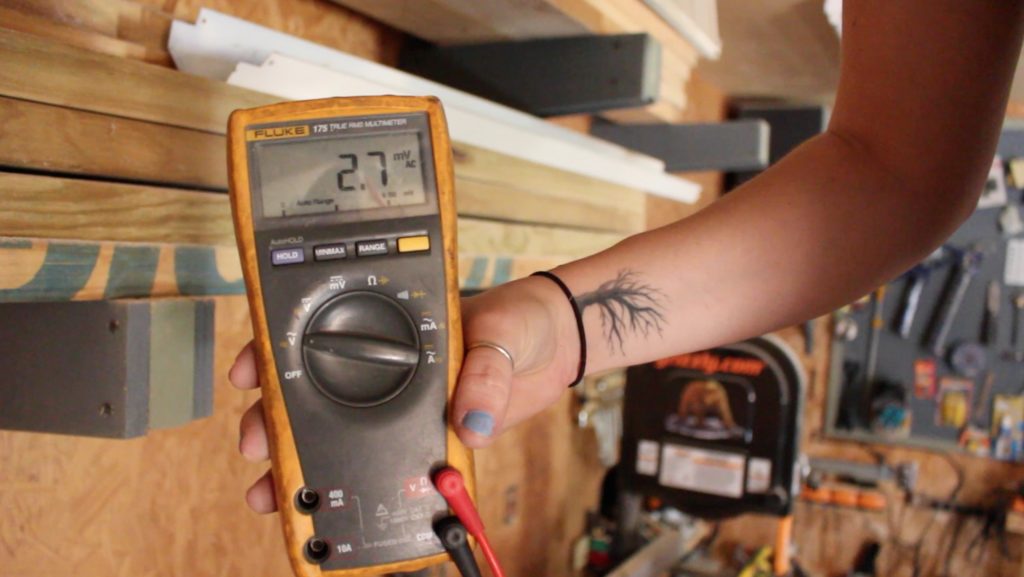 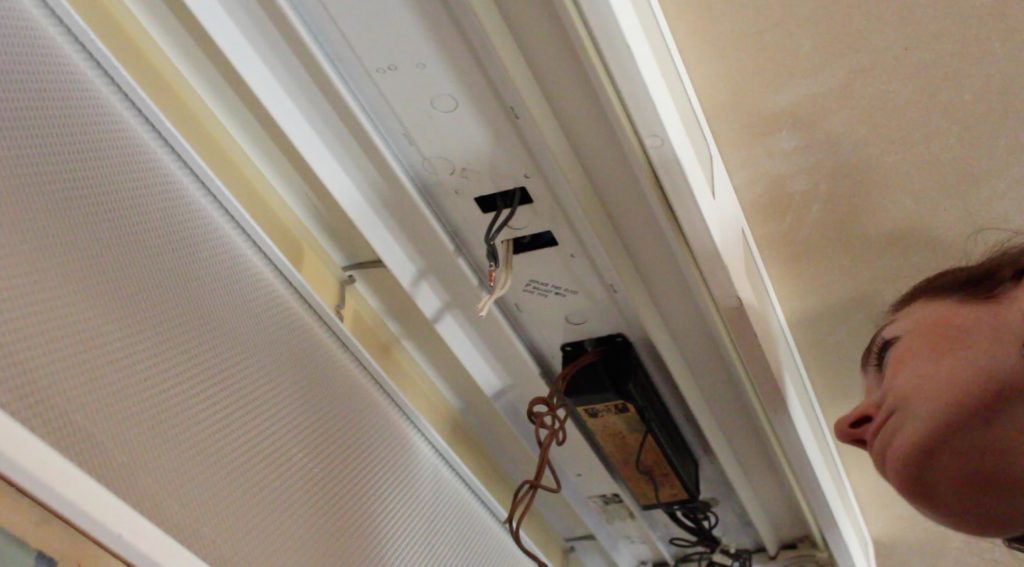 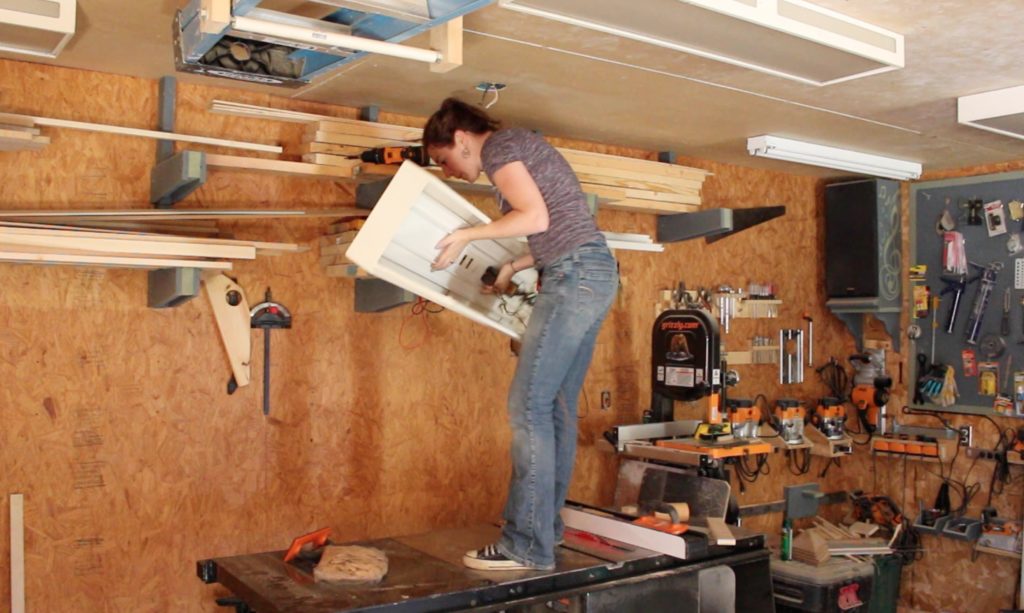 I unboxed the new T8 fixture, I purchased them at my local home improvement store. The wiring diagram is on the ballast but you will need to take the two blue wires and run them to the right side of the fixture. Take the plastic pieces and slip them into their dedicated spots on the end. Then repeat with the red and white wire on the other end. (Red closest to you and white farthest from you). 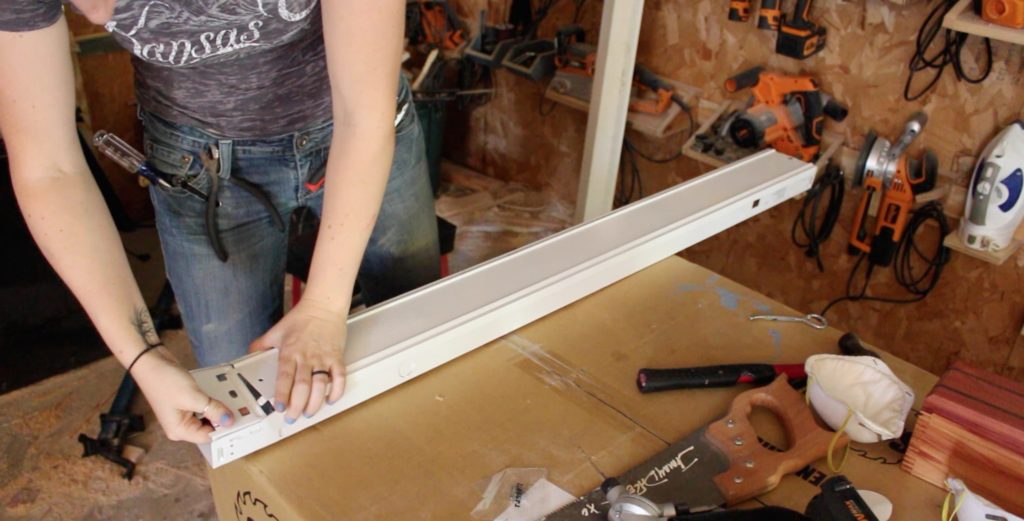 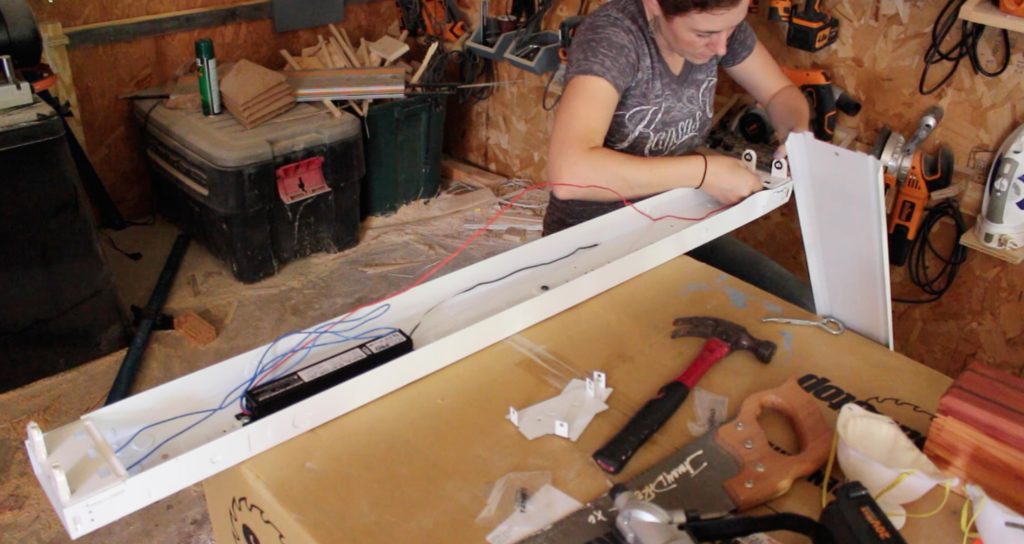 Grab the end plates that came with the fixture and tap them onto the ends. 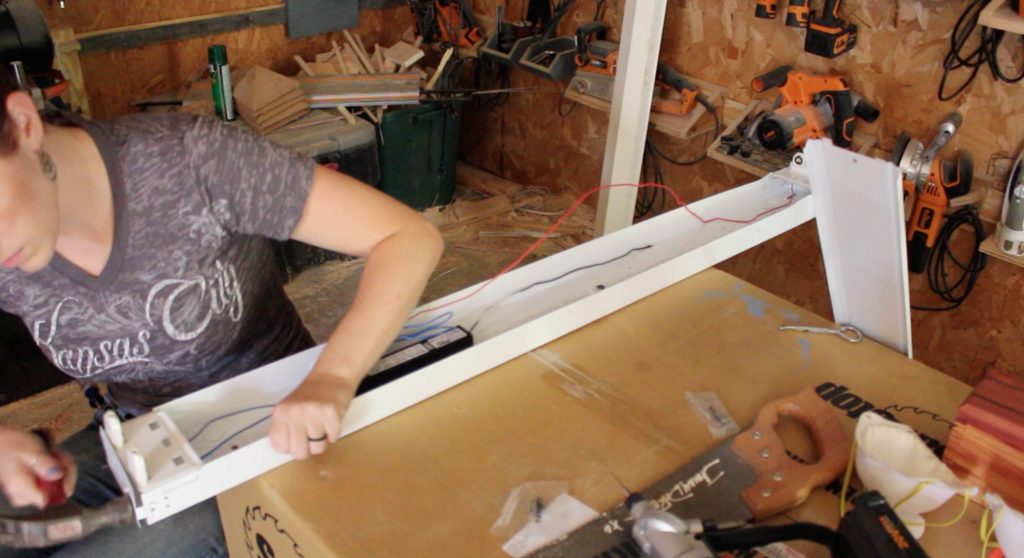 Flip the fixture over and you will need to knock out one of the ‘knock out plates’ near the center of the fixture. These are a big pain. I took a screw driver and a hammer and got it started. Then I flipped the unit over and finished ripping it off using a set of pliers. Just grab a hold of it then wiggle it back and forth until it breaks off. None of mine came off very clean, so make sure to not cut yourself while working around these slots. 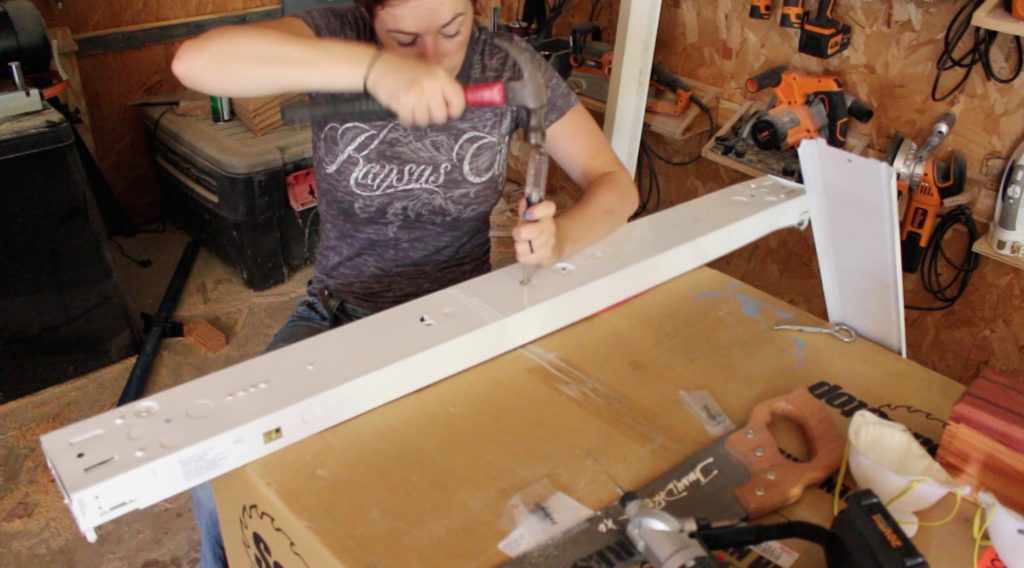 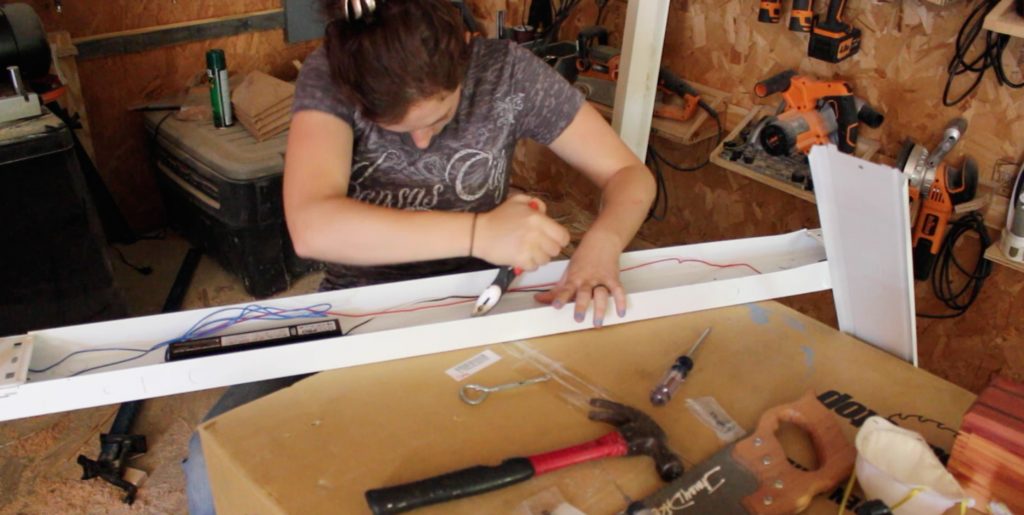 Next I took the fixture to the ceiling and ran the wires from the ceiling down into the knock out slot so that they are inside the fixture. Since I’m working by myself I would bend the wires at a 90 to kinda hold the fixture in place for me while I grabbed my drill and screws to attach it. 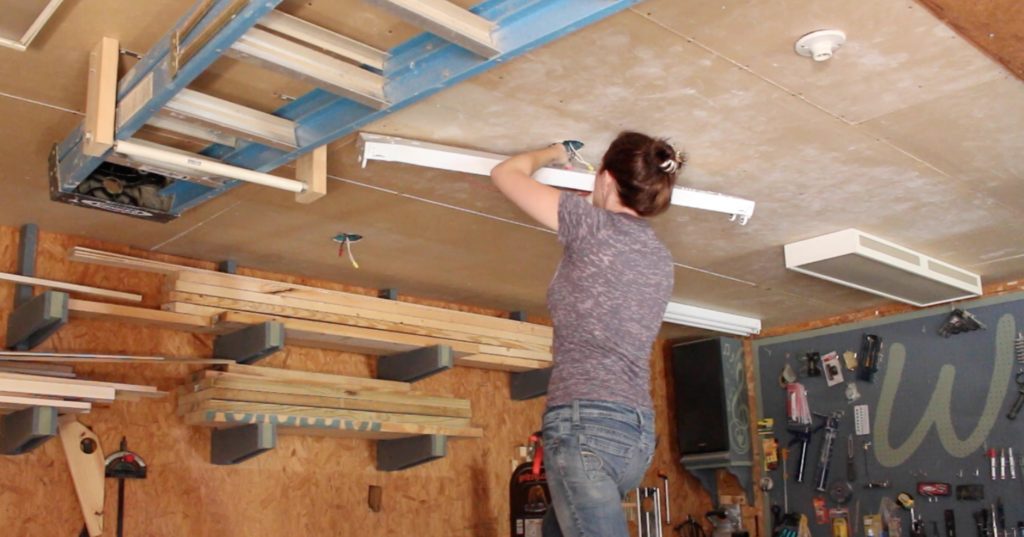 Make sure to attach the fixtures to the studs in the ceiling. Mine were already marked by a previous owner but you can use a stud finder to locate and mark yours. Tip: You can run your fixture along the length of the stud (instead of across it) to make attaching them easier.

Once the fixture is attached you can start the wiring. Take off the wire nuts then grab the black wire from the ballast and twist it around the black wire(s) coming in from the ceiling. Then do the same with the white wires. Note: Even though these wires come pre stripped, I ended up taking off a bit more to make twisting them easier. I also used pliers to make sure the end was tucked against the twist nicely. Replace the wire nut on both wires and give all the wires a gentle tug just to make sure they are all secure. If one comes out on your tug test, then take the wire nut back off and twist them together better. 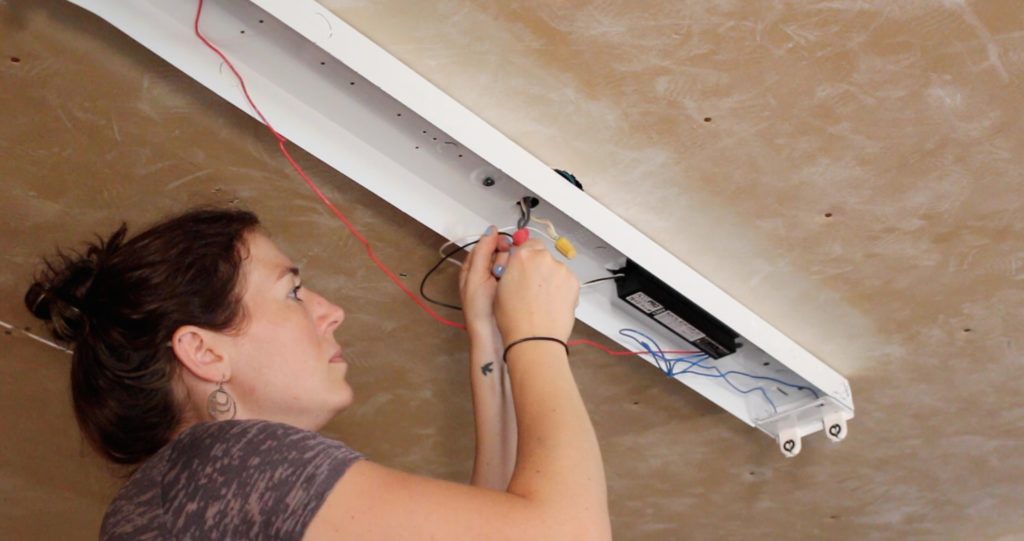 Now take the ground wire (which should be a bare wire) and wrap it around the green screw that is attached to the light fixture. Wrap it around the screw clockwise so that when you tighten down on the screw you will be pulling it into the screw instead of pushing it out.

And that’s it! That’s all the wiring you have to do. Now you can tuck all the wires into the housing and put on the cap. Install the light bulbs then turn on the breaker to test that it works. (If you do this, just be sure to turn it back off before continuing to work). 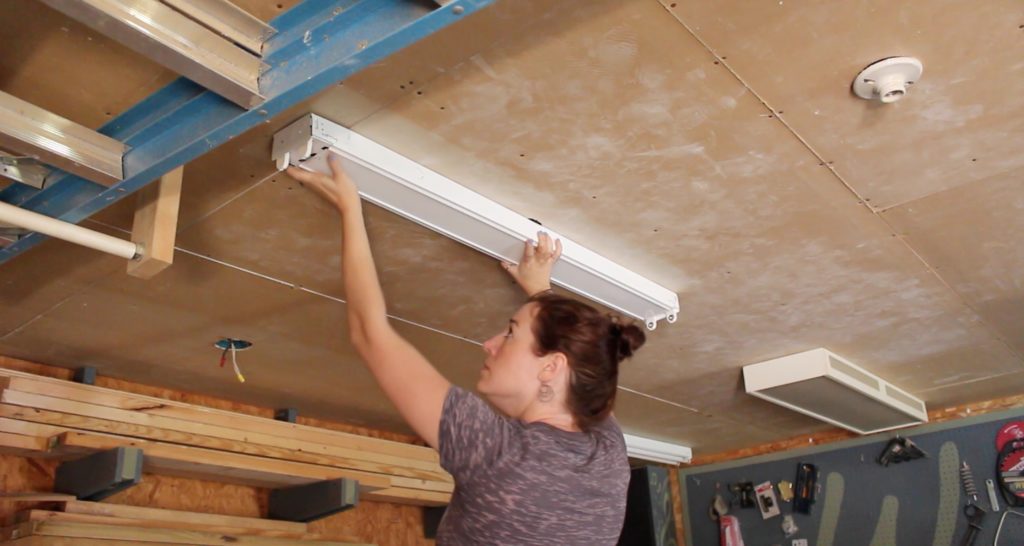 You can repeat the steps for every fixture you want to replace. For the fixtures I didn’t want to replace, I would tear down the old fixture then make sure a wire nut was on the end of the wires then tuck them into the ceiling. Like I already said, I went down from 16 fixtures to seven and my shop is still as bright as day! It’s a big change from what I have been working with and I can’t be more happy.