Well, I have to admit that I am pretty excited to finally publish this project. About a year or so ago my dad mentioned that he would really like a carport one day built in front of his house to keep the sun off of his vehicles. This week, I finally tackled this project and let me tell you, it was a lot of work. 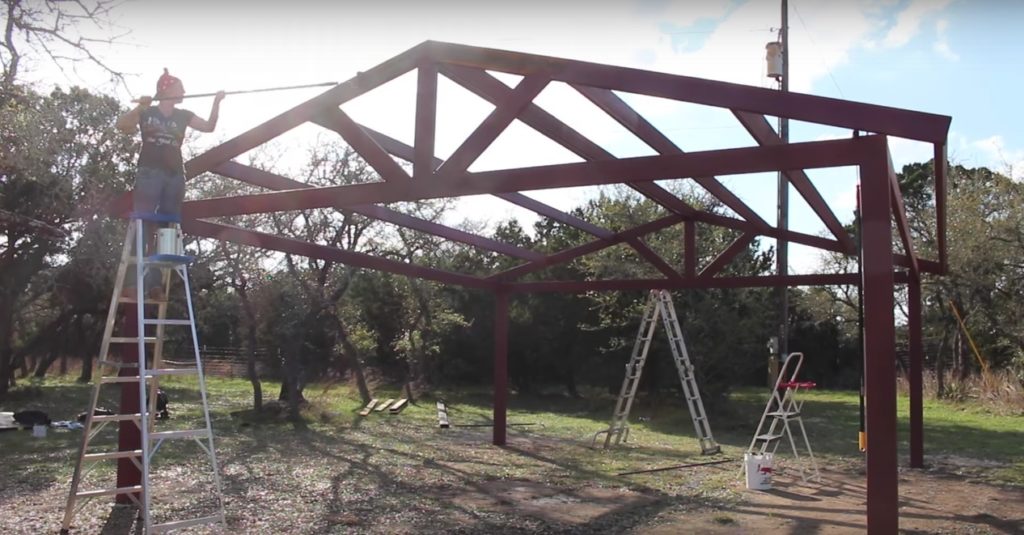 If you haven’t already, feel free to check out the build video I posted to my YouTube channel seen below:

After searching through countless images of carport on the internet my dad and I finally agreed on a style. Once I had a good direction of what the project needed to look like I went to the computer and began modeling the carport.

This carport is built very stout. All four posts are made from 6 x 6 material that is 3/16 thick. All of the trusses, girters, and purlins are built from 2 x 6 rectangular tubing that is 14 gauge stick.

After I decided on a design, and purchased just the basic material I began the process of locating and digging the post holes. The ground at my parent’s house is very rocky and not easy to dig. But, I’m a pretty stubborn person, so I don’t mind just toughing it out. 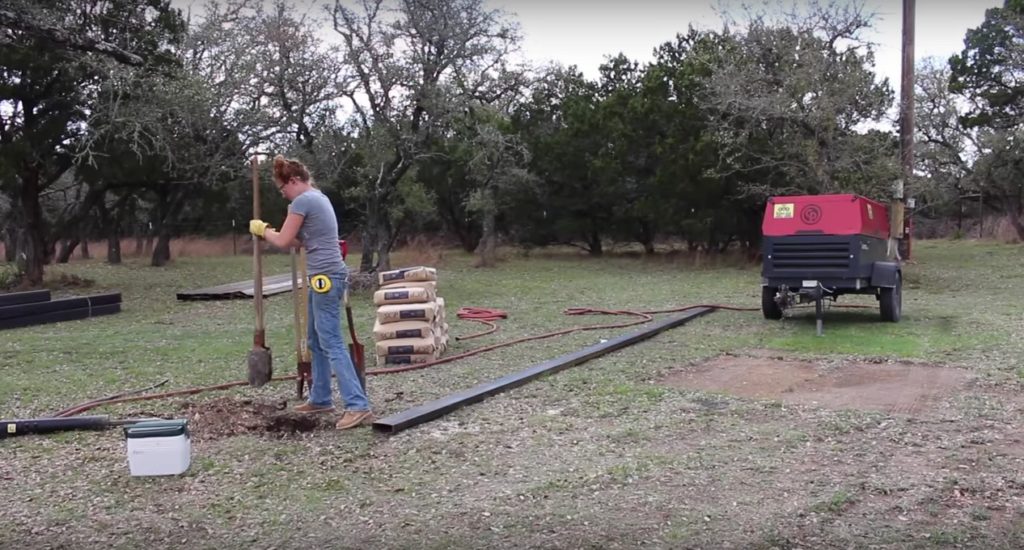 Rather than putting the base of the pole inside of a hole and surround it with concrete, I am going to set a half inch base plate into the concrete and weld my post to the base plate after the concrete has cured. This makes locating and truing the post much easier.

Note: it is very very critical to get the position of these plates located precisely. Before committing to a final position for each one of the plates I checked the diagonal over and over again to ensure that the layout for my carport was as square as possible. If special attention is not paid during this step, it will make the entire project very difficult.

The anchor plates are held to the concrete using 3/8 diameter eyebolts. These bolts get inserted into the holes of the plate and then pushed into the wet concrete mix that is in the post hole. The eyebolts serve as anchors to the base plate.  After everything is measured for what might have been the 15th time, I set the plates in the concrete and allowed one full day for the concrete to cure before I began attaching the post. 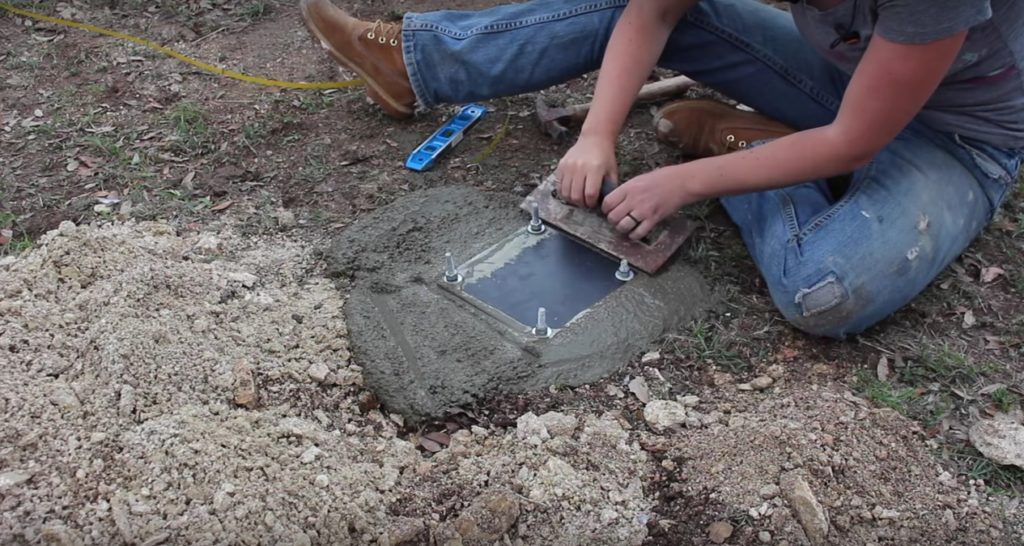 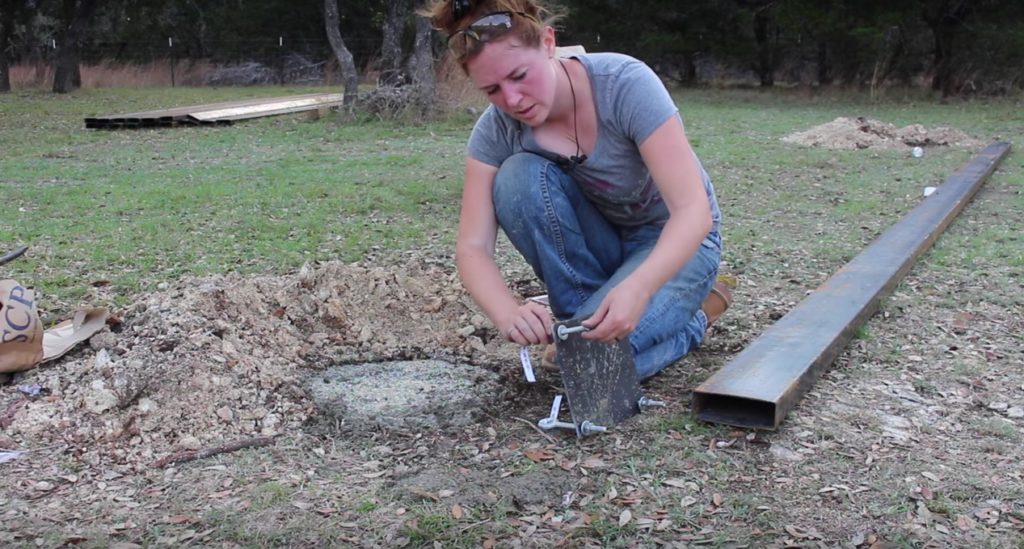 Before attaching the post it’s very important to note that each one of the post has a square cut end. This will ensure the post will naturally rest in the plum position before I weld it. Just as expected, after setting the first post it measures perfectly plum and got welded to the base plate. 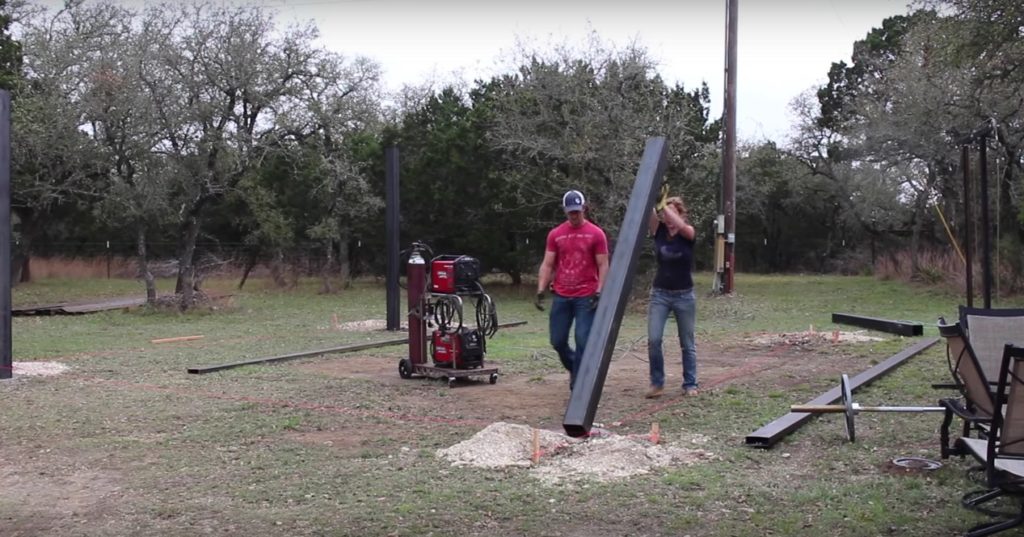 The remaining three posts got the exact same treatment. As it is, all of the posts are cut to 9′ long which is longer than I need. The ground is not totally even on my parents property, so I will leave the post long for now and cut them to length in the following step. 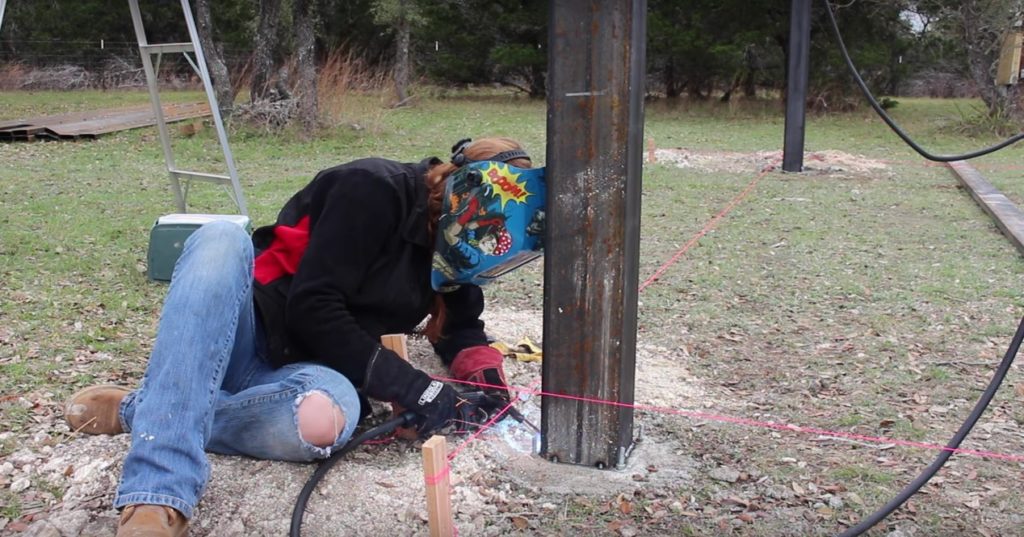 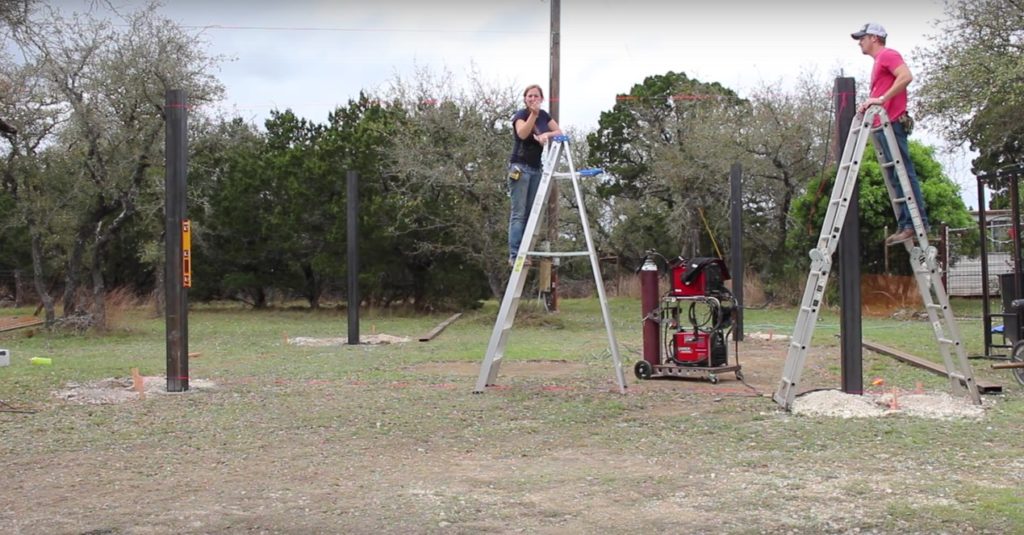 Because the ground slopes upward toward the back of the carport, I cut the back two post first. I cut my first post to 102 inches tall (102 = 96” of ground clearance + 6” of rectangular tubing). From there I used a line level to project a straight line from my first post to the second. I repeated this process until all four posts marked with a level cut line with respect to one another. Finally, I cut all the posts and each post top is level to one another 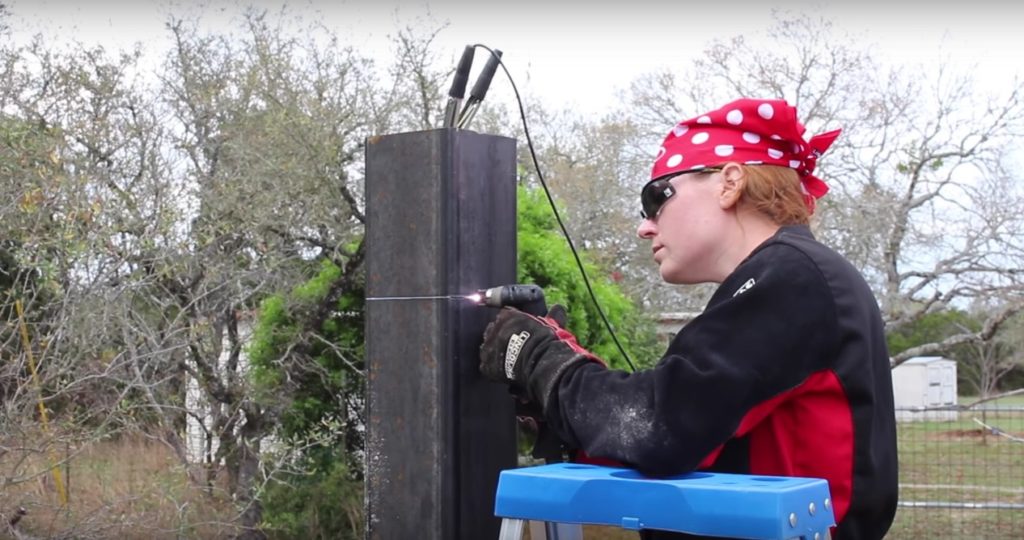 The next step is to cap off the posts. Before hanging any of the purlins or girters, I covered the top of each post with 1/4 inch plate. This place serves two purposes. The first is to provide a good base to weld the trust material to later in the build and the other purpose is to prevent rainwater from getting inside of the posts. The quarter inch plate was cut a little bit smaller than the opening of the square tubing so that I could weld the open corner joint of the plate to the post all the way around.

After the plates were attached, I could finally hang my first piece of rectangular tubing.  Again, this material measures 2″ x 6″ x 14g thick and each joint is 24′ long.  If you’re curious, each joint weighs just over 100lbs. suffice to say they were a little challenging to move around. Anyhow, to start with, I cut the first girter that spans between the front two posts. 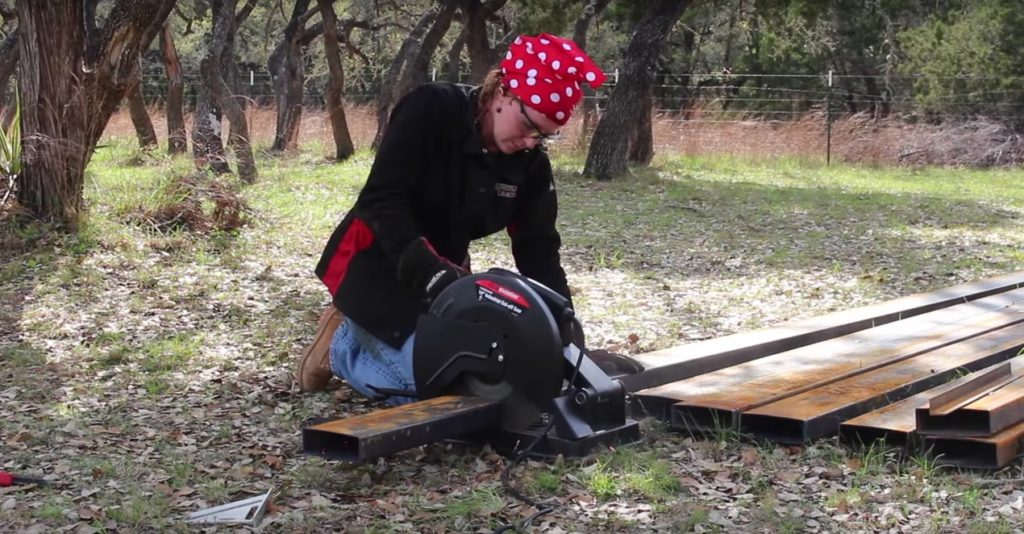 I enlisted the help of my husband to lift this mammoth up to the top of a ladder where I then welded it in position. I’ll ad,it that it felt pretty good getting the first piece in the air. 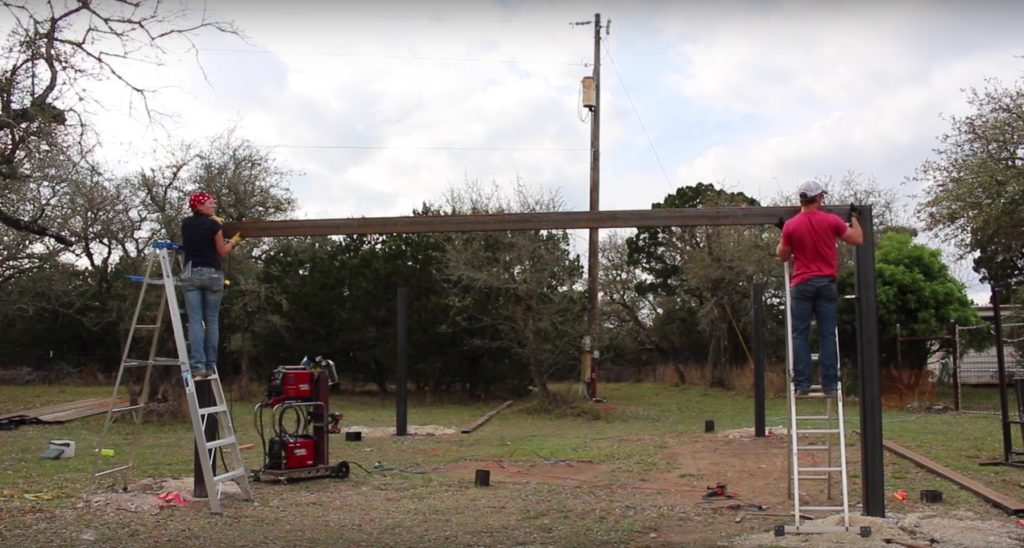 From there the process for the remaining three sides wen the exact same: take a measurement, cut the long joint to length using a chop saw, then climbing up the ladder with it so I could weld it in place. Admittedly, it takes a lot longer than one would expect. Hanging the first two front and rear girters as well as the side perlins took an entire day. 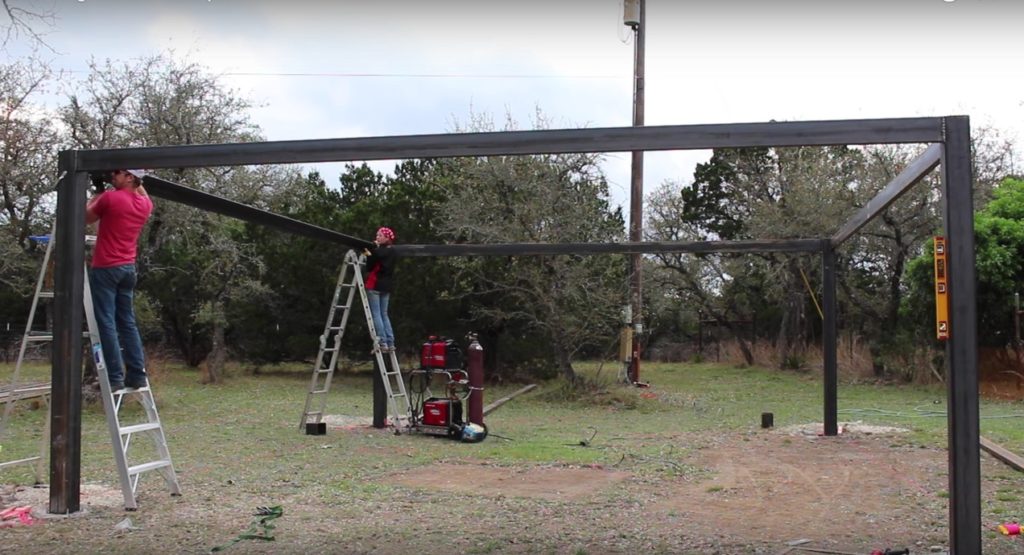 With my first two girders and purlins in-place I turned my attention to making the trusses. I built these trusses with a 3/12 pitch. To make the trussses I cut an angle on the end of the rectangular tubing and then welded the two pieces together to make the top chords of the truss. It is important that the two pieces of rectangular tubing that make up the trusts are nice and level to one another before they get welded together. 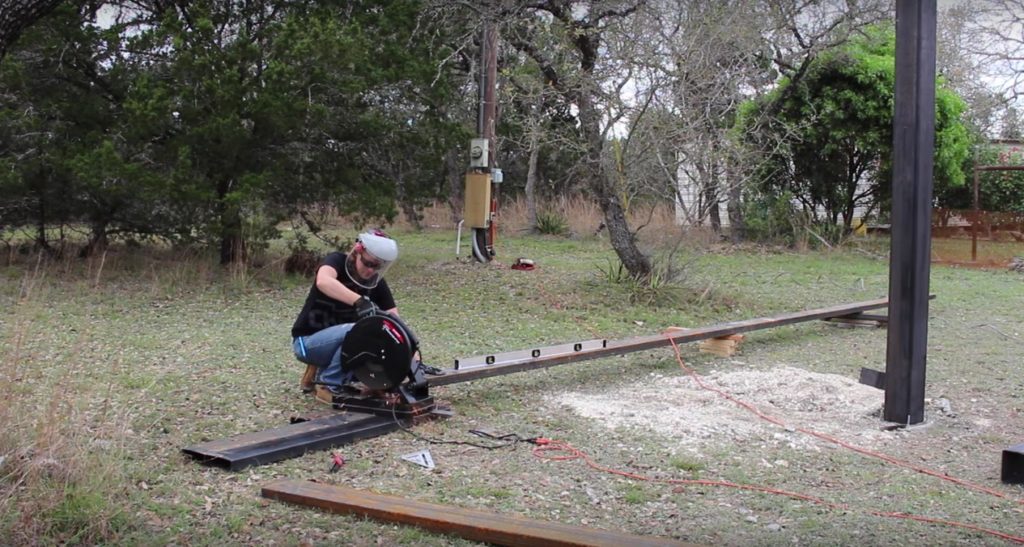 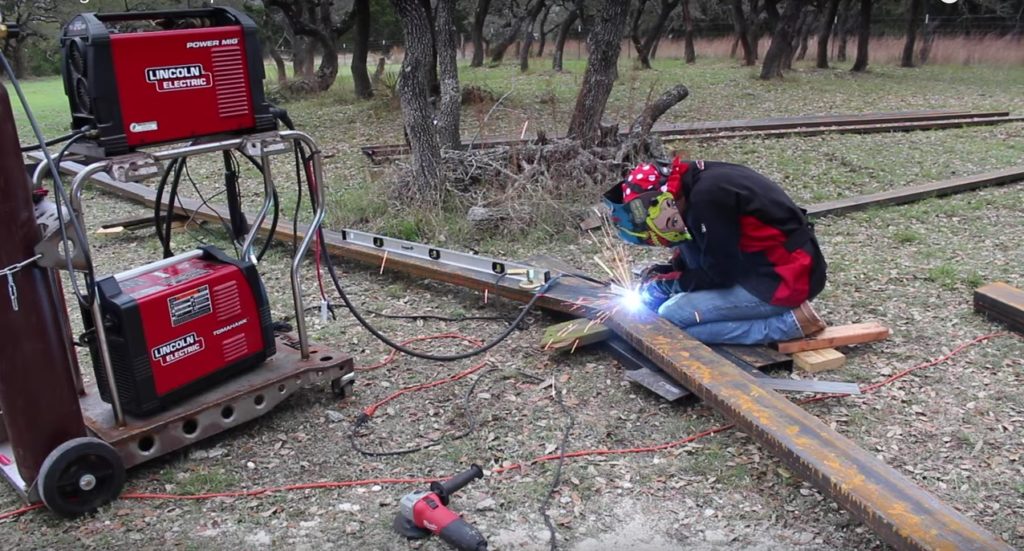 Before welding these two pieces of material together, I cut each rectangular tube about 1 foot longer than the final length needed so that way I can come back and cut them to length once they’re in the air. This just makes the assembly a lot easier to work with when positioning it in the air. With the two top chords welded together I lifted them up into place and then welded them in position. I took my time to carefully position the truss so that it is not only centered but also plumb. I used a piece of equipment to set the first one in place but did the second one by hand with Cody.  Oddly enough, lifting them by hand and setting them in position without the use of the machine was easier. 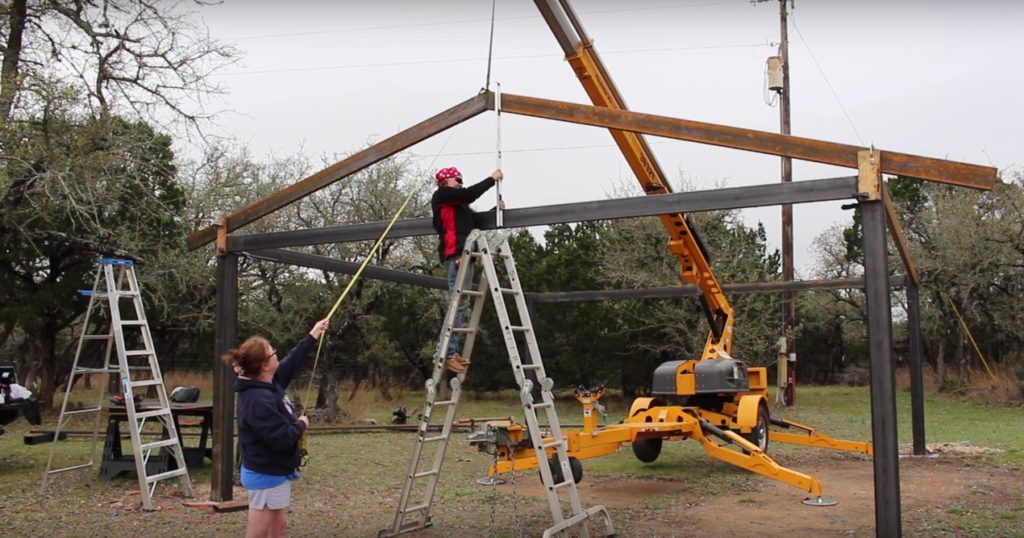 Obviously, the same was repeated for the opposite side. It’s important to mention that the top of each post has two gusset plates welded to the trusts and the top of the post. I made these gussets by cutting them out of quarter inch plate material with two plasma cutter.

The supports inside of the truss are known as “webs”. After carefully measuring the length for each web I transferred those marks on two short pieces of tubing and cut them to length, then welded them into position. 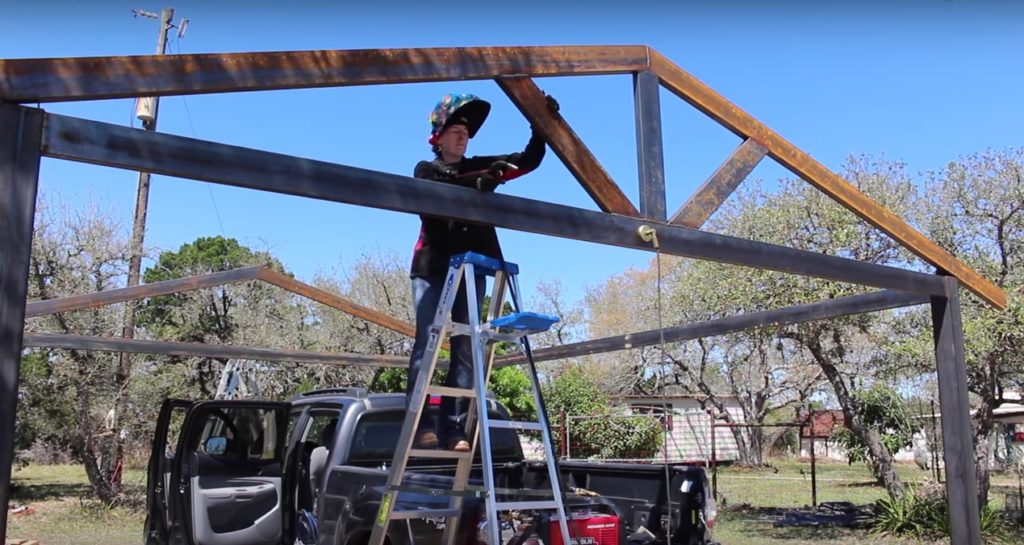 And that’s run going to stuff this week for this project. Check back in next week when I wrap up the remaining perlins and hang some roofing material!

Thanks for dropping in – April. 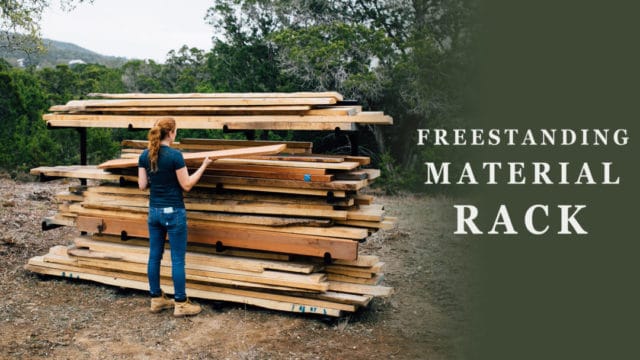 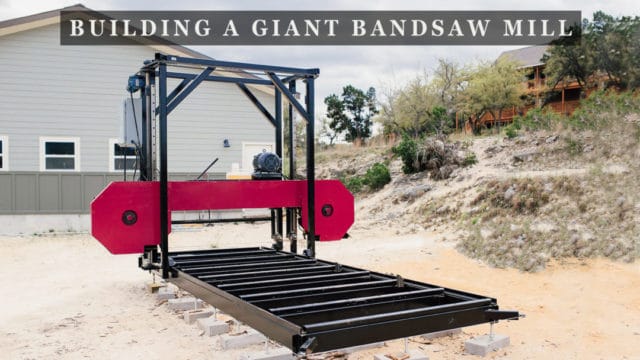 Slabbing With My Bandsaw Mill 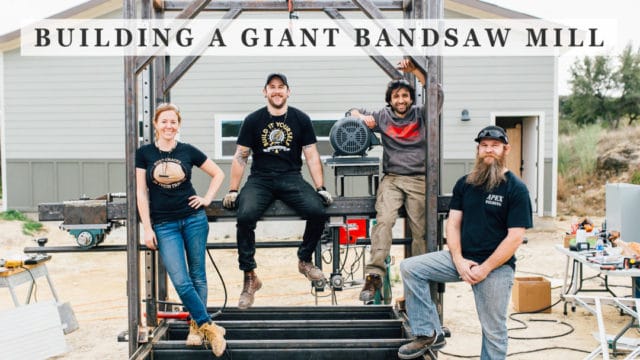 Building A Giant Bandsaw Mill – Bringing It All Together