How to Build a Wooden Windmill

When I recently visited my folks my mom showed me a windmill prop she picked up and asked if I could make her a windmill base for it to sit on. I’ve never built a windmill but I told her “of course”.  The prop isn’t that large so I made a windmill tower that is just over 6 1/2 feet tall and all from material that can be found at the big box store. Since it is an outdoor decoration I made mine from cedar since it’s a naturally rot resistant wood but a slightly cheaper alternative would be to make it from treated or untreated pine. I did put together a free set of simple DIY windmill plans showing the dimensions of my windmill base if you want to replicate it. Alrighty, lets get into the tutorial.

Here is a video showing an overview of the build process:

I’m working at my parents house and my dad does not have a miter saw, so I am using a circular saw and my SuperJaws to cut the two by boards down to length. Before you cut your boards first determine how tall you want your windmill to be. I decided on 80″ for the legs which is roughly six and half feet tall. 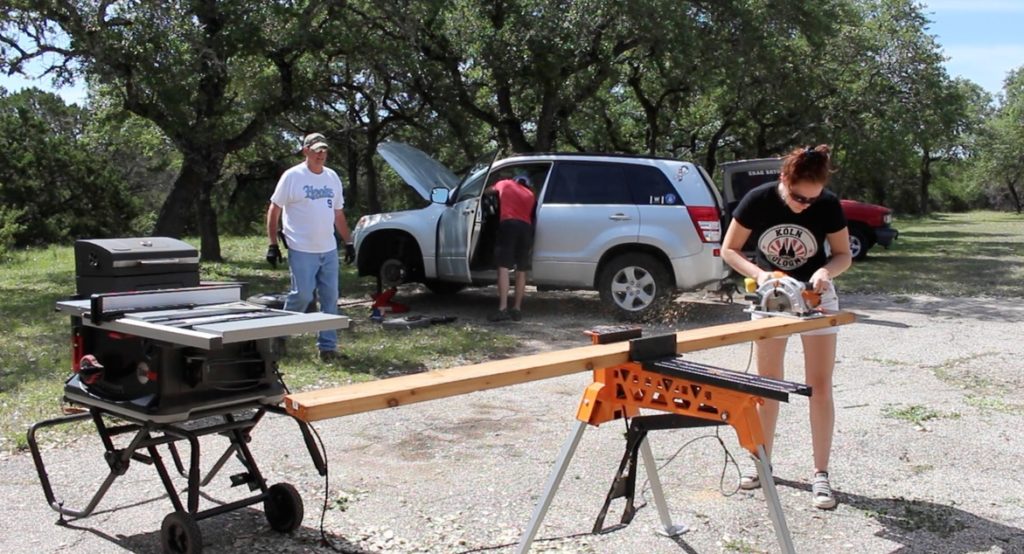 After cutting the boards to length, I used my table saw to rip the boards into four legs at 2″ wide each. 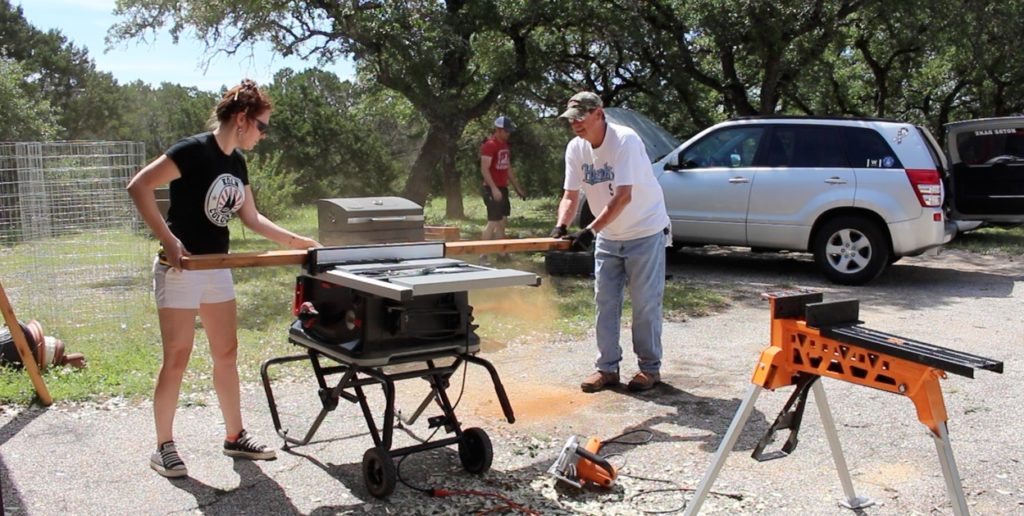 Now a compound miter needs to be cut on both ends on all four legs. I chose 5° for mine, which makes the windmill stance roughly 35″. If you want your windmill to stand wider or narrower then you can do that by changing the angle of this compound miter.

To make a compound miter change the table saw blade to 5°, and also change the angle on the miter gauge to match. Now you can run all the legs through on one end. After cutting one side, flip them over and cut the other side. Note: Make sure cuts parallel to one another. 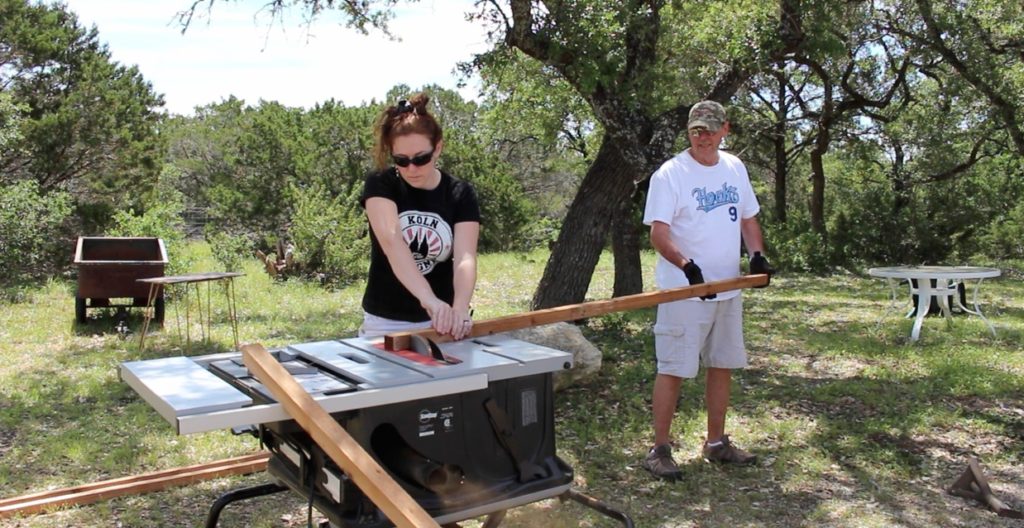 Next I cut cut a scrap sheet of plywood down to 12″ x 12″ and attached the legs to the corners. This is to hold the legs in place temporarily to give me time to attach the bracing along the sides. The legs need to be placed on all four corners of the plywood. 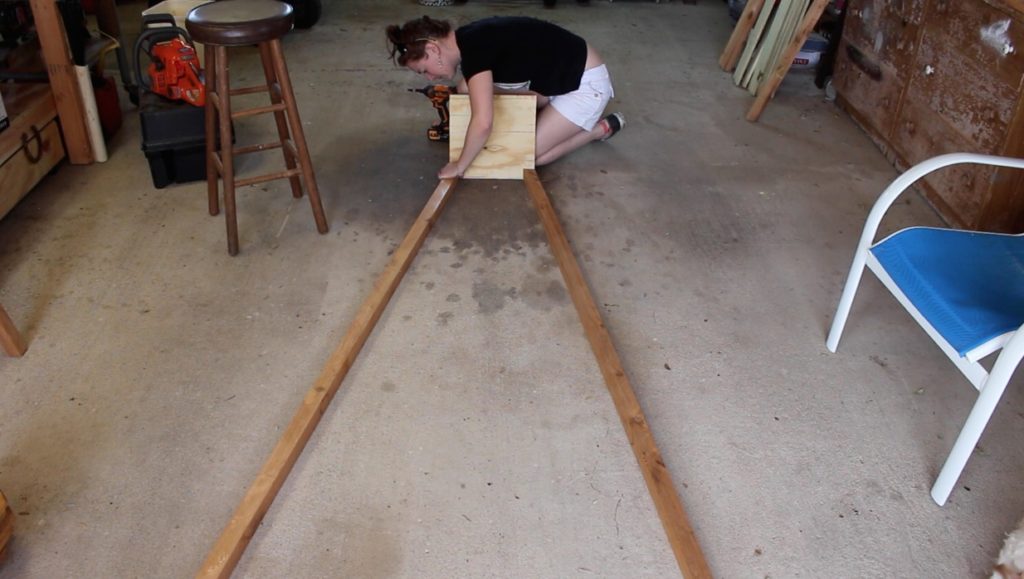 I found it easiest to attach the first two legs while it was laying on the ground, then stand it up and attach the other two. 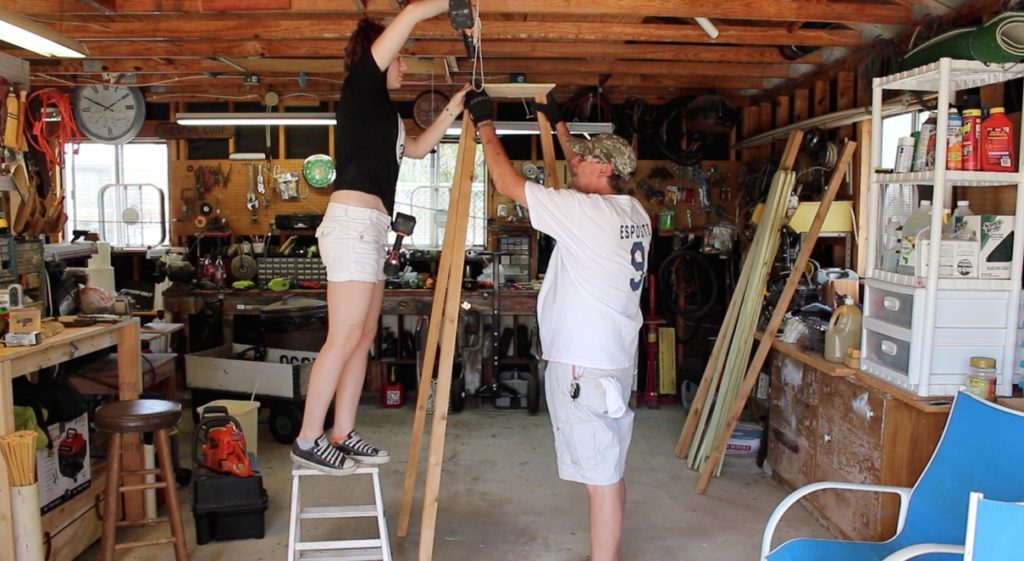 Before adding the bracing, the legs need to be positioned correctly. They need to be placed 35″ apart from one another so I would first measure from one leg to the next, moving them as they needed. Once they were in position I used chalk to mark their location so it would be easy to see if they got shifted.

After all four were marked I moved to cutting the braces. For the braces I’m using fence pickets. I would first rip them down at the table saw to 2″ wide. Note: Don’t throw away the cut offs because you can use them later. 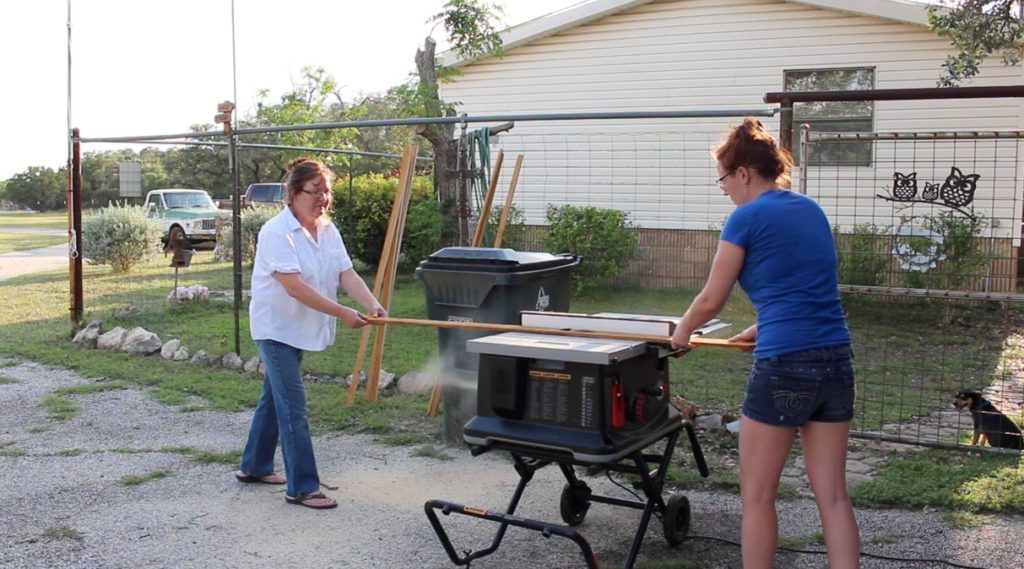 After a few strips were cut to size I started adding the bracing. I first determined how tall I wanted the top ‘X ‘to be, I went with 24”. Then I grabbed one board and held it in position so that there is excess material on either side then took a pencil and marked on the backside. Note: This is actually a lot easier with two people so ask a friend to help! Next I used a jigsaw to cut along the pencil marks to cut the board to size. 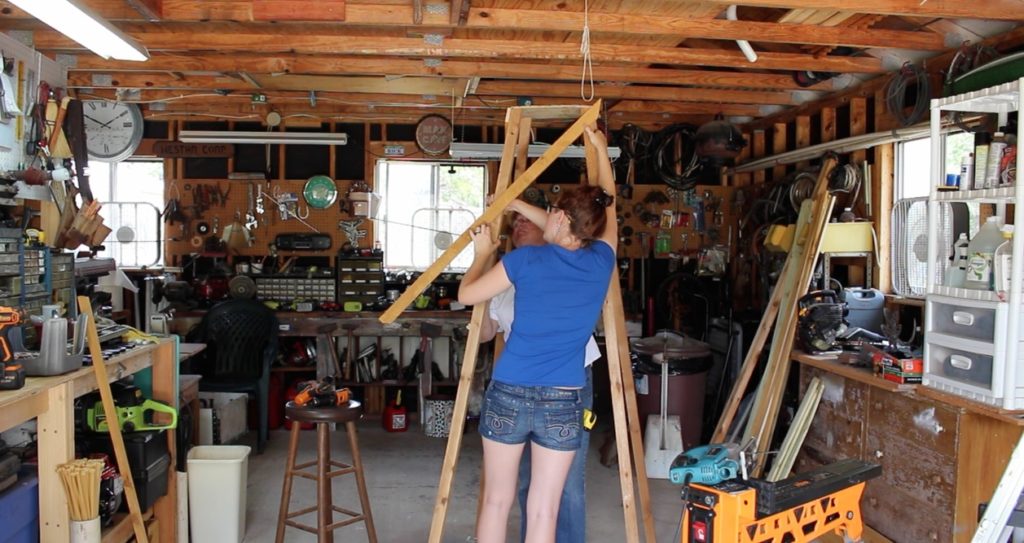 Once the board was cut to size, I attached it by first using a countersink then two 1 1/4″ screws on either end. After getting in the first diagonal, I repeated with the horizontal piece. Note: Make sure your legs stay within their chalk lines throughout this process. Mine shifted several times and had to be nudged back. 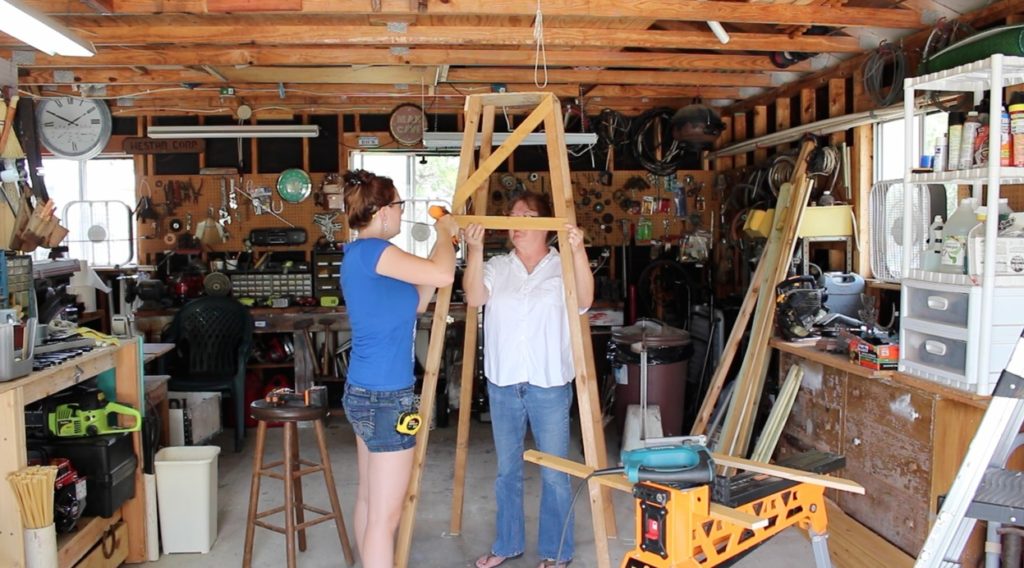 I repeated and did the same thing on the remaining three sides. This should be enough to keep the legs in their position but it’s still safe to just glance down and double check that they don’t move on you.

Next I added the second diagonal the complete the X on all sides. Now at this point you won’t be able to mark the back of the board because the other boards will be in your way, so instead I grabbed a speed square (any straight edge would work) and held it in front of the board and just eye balled the angle until it looked in line with the legs. Once I had it looking correct, I used my pencil to draw a straight line then cut it using my jigsaw.

You’ll need to make this board bend slightly in order to connect on either end, to make it easier to do this I used two quick clamps to hold the board in position while I came back and used my countersink and screws to attach it. 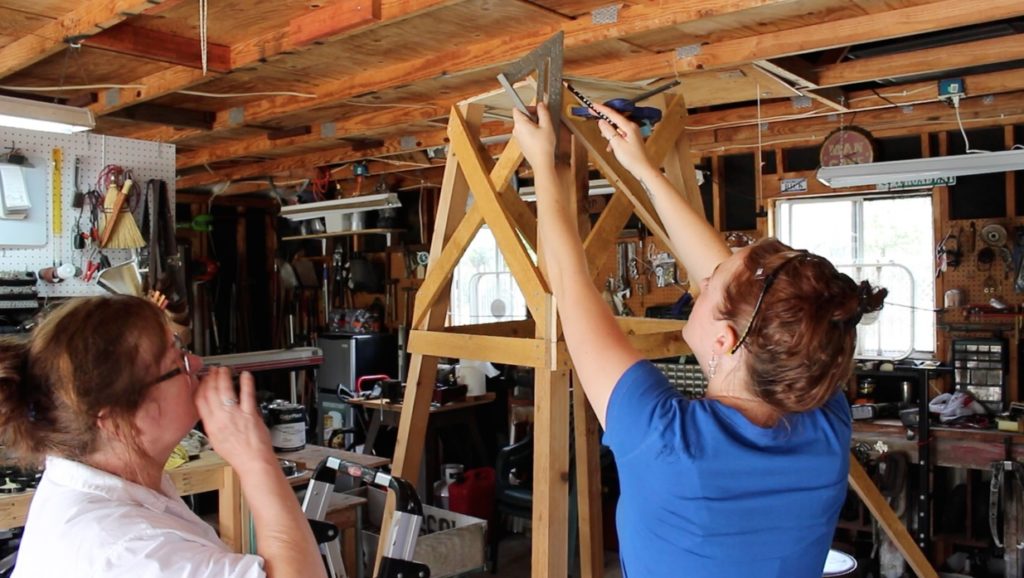 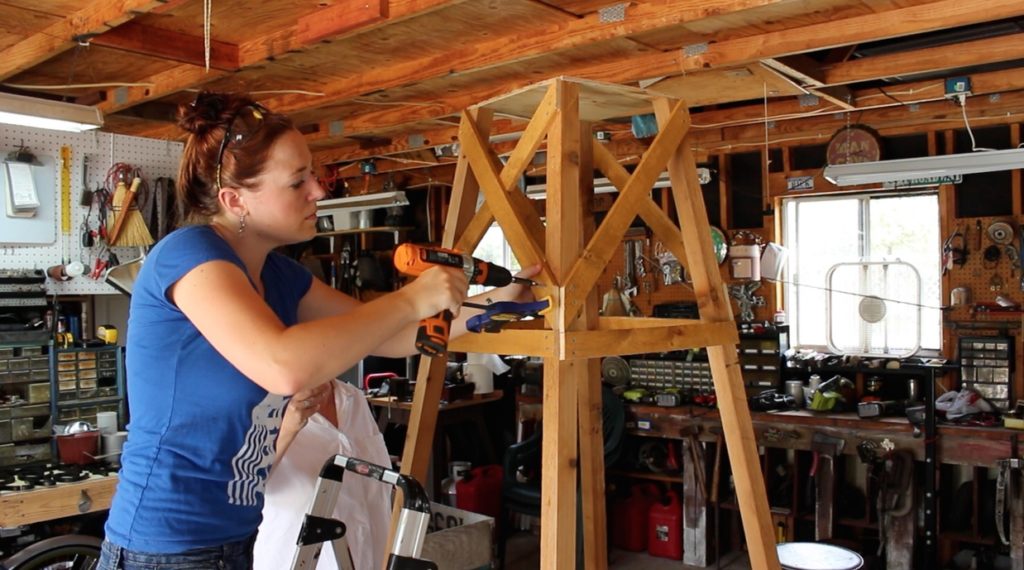 Now you can repeat the same process with the larger ‘X’ on the bottom. Mine is roughly 41″ tall.

Okay with the base done now it’s time to make a platform. I gathered up the cut offs from making the braces so I wouldn’t have to use up more fence pickets then cut them to length first with my jigsaw. I spaced them out evenly (I just eyeballed them), then came back with a countersink and screws to attach them. 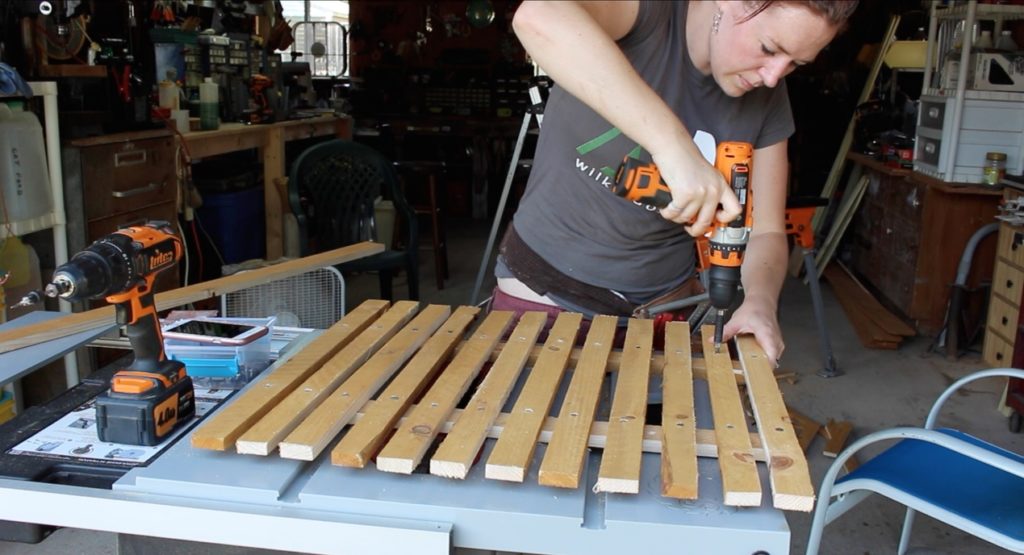 Next, I took the completed platform up to the top and attached it to the base by using two screws in each leg. 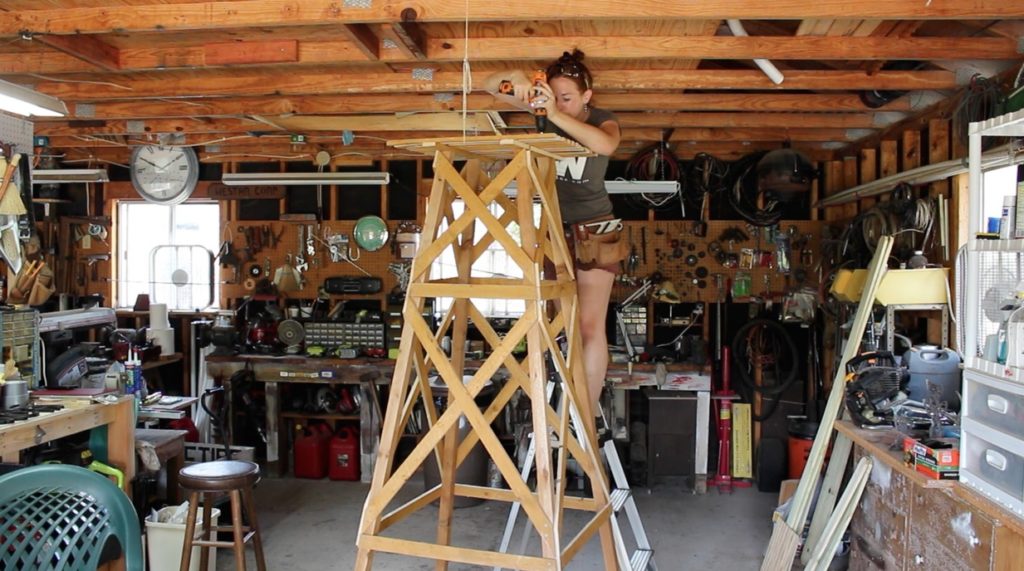 And that’s it! It’s a pretty quick and easy process that would make a great family project. A little bit of table saw work was involved but there was also a ton of jigsaw work, so if you have a family member that has been showing some interest in learning how to work with tools then maybe you could rip all the boards to size then let them handle the jigsaw and drill. Of course, if you have a miter saw then it would just simplify the project that much more. : ) 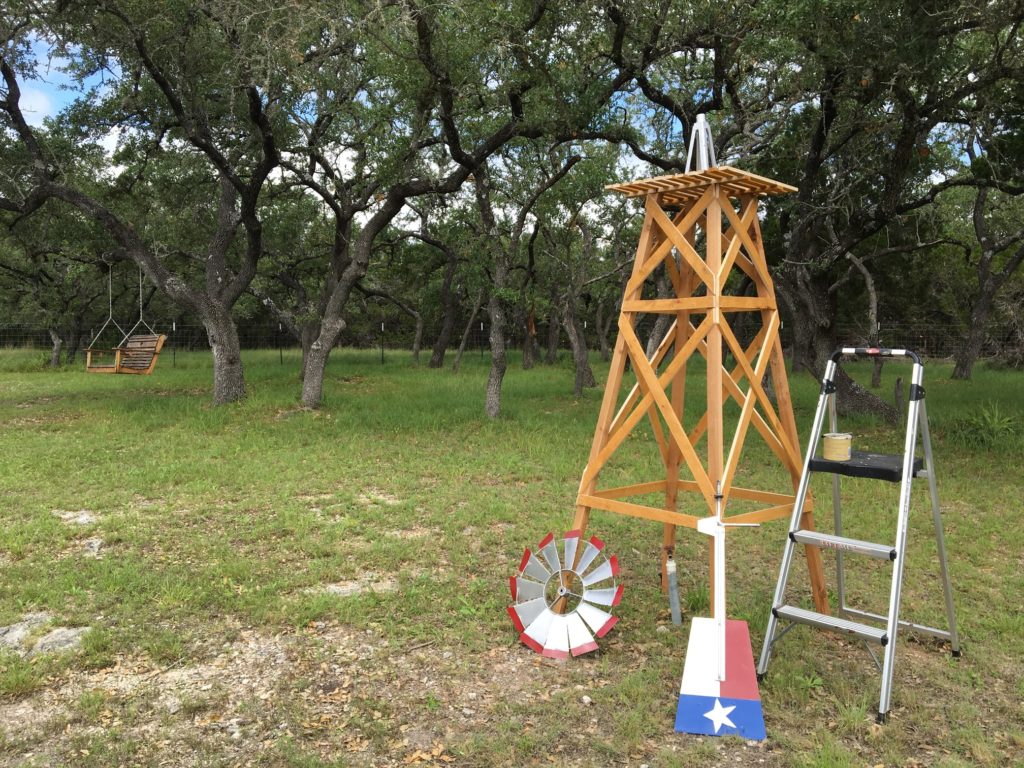 If you are look for a windmill prop then you can probably find one to purchase, but another option would be to make your own! I have a buddy named Patrick who makes his own windmill turbines and he has a video of the process here.

Since my mom already purchased one, I just cleaned it up a little bit, gave it a new paint job, then threw it on top of the new base. I must say… I really like it! 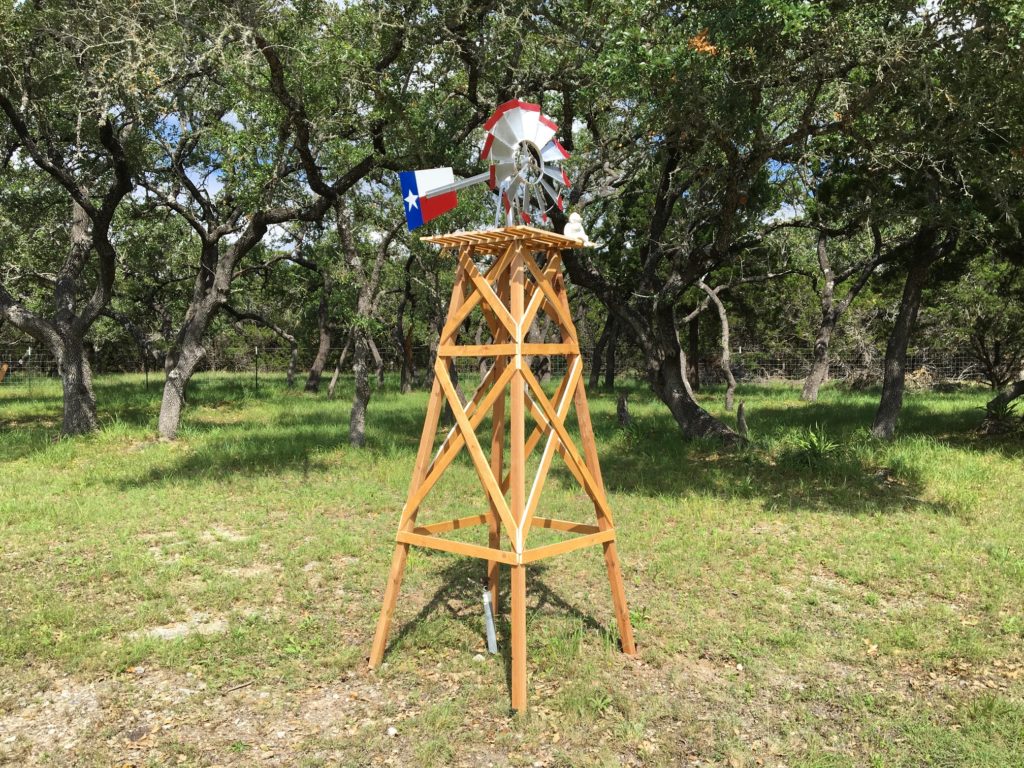 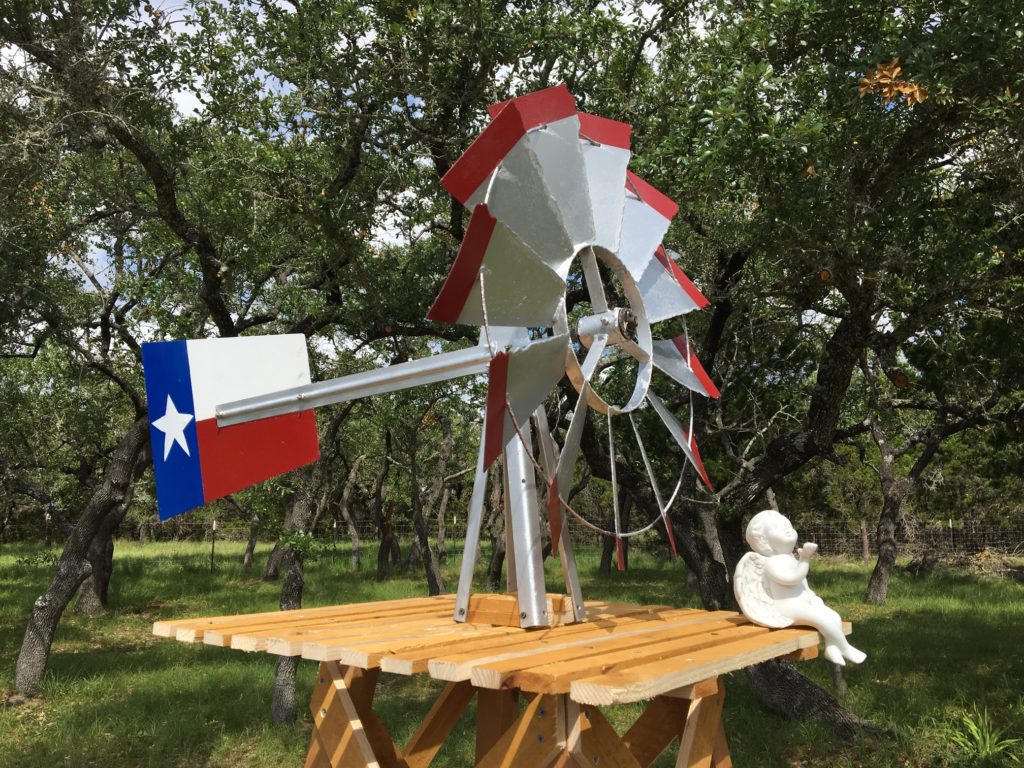 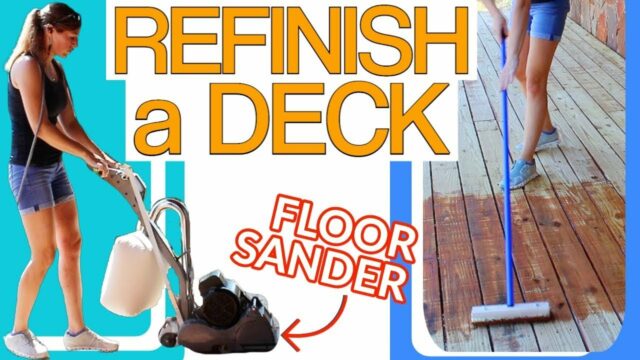 How to Refinish a Deck | Sand It or Strip It?