Alright, I think this is going to be the final project for my entry way makeover.

If you remember, when I built the hanging lanterns in my entryway, I wasn’t completely in love with them. I did give them some time to see if they would grow on me, but since they didn’t I decided to build some wall sconces instead and put the lanterns over on the fireplace mantle. Since I’m going for a county/rustic vibe, I think these sconces fit the space much better. 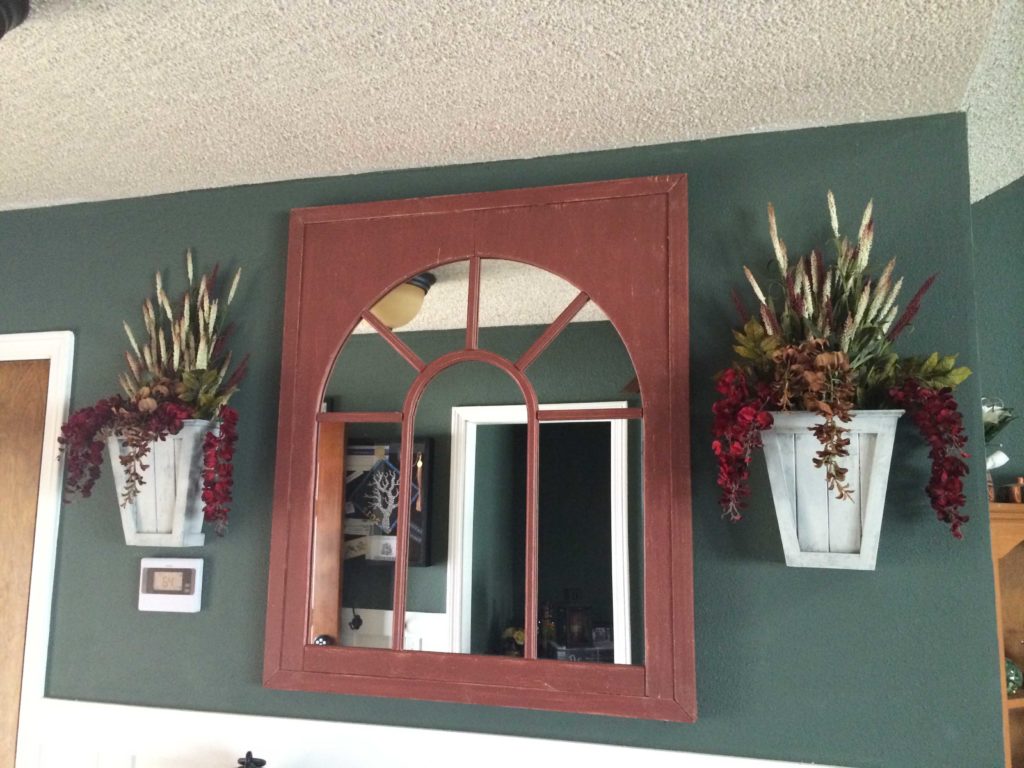 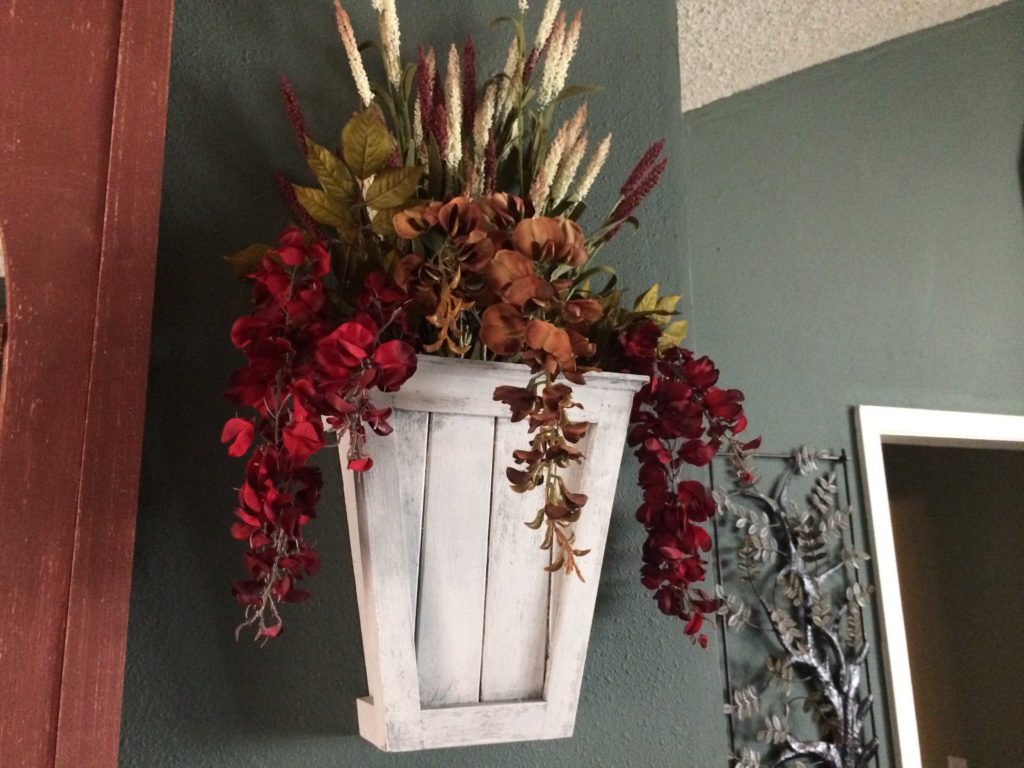 Stupid thermostat, messing up my wall. >: / 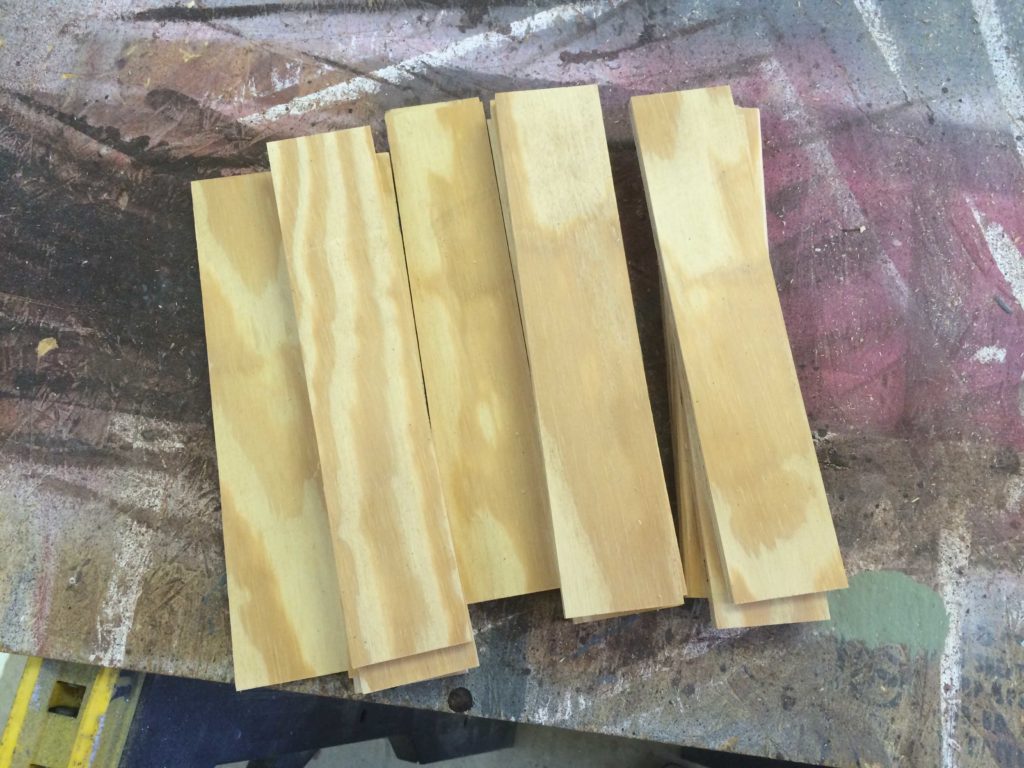 2) I grabbed my router and put a small round over bit in it, then went over all the edges. Note: I did this so that when I glued the slats together, they wouldn’t just create a flat panel. 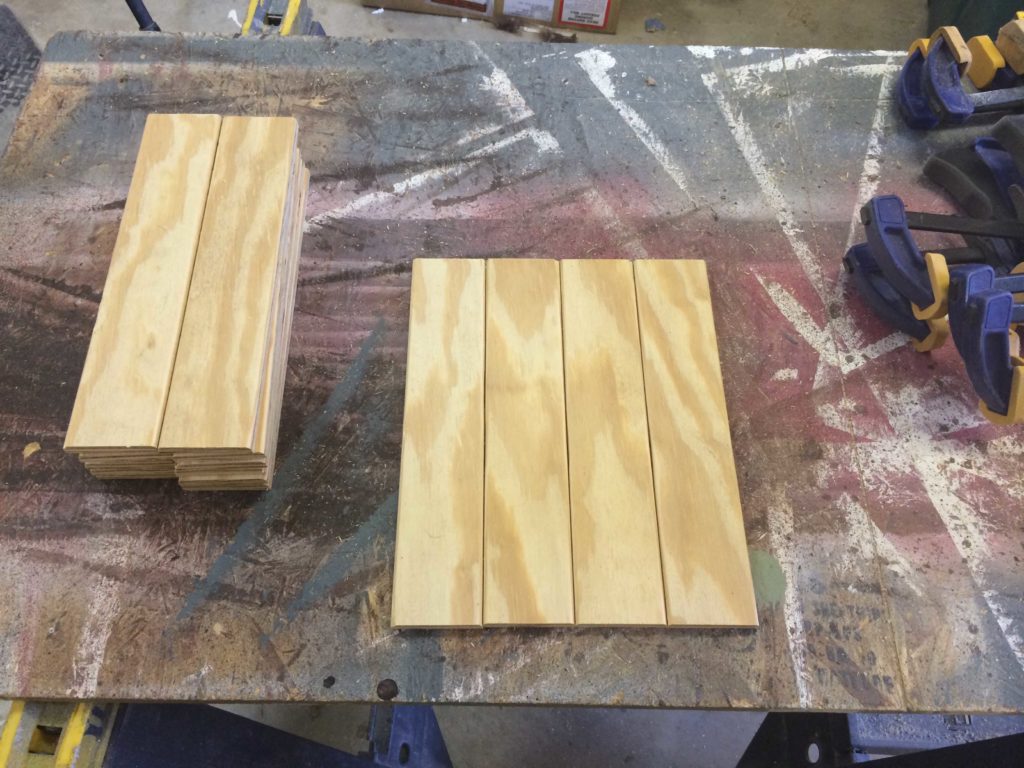 3) I glued four slats together to create four different panels then clamped them up and let them dry. Just to avoid pulling out every single clamp I own I decided to stack them on top of one another and utilize the same clamp. To avoid glueing each panel to each other, I put down a layer of plastic wrap (wax paper is the normal thing to use, but I didn’t have any). 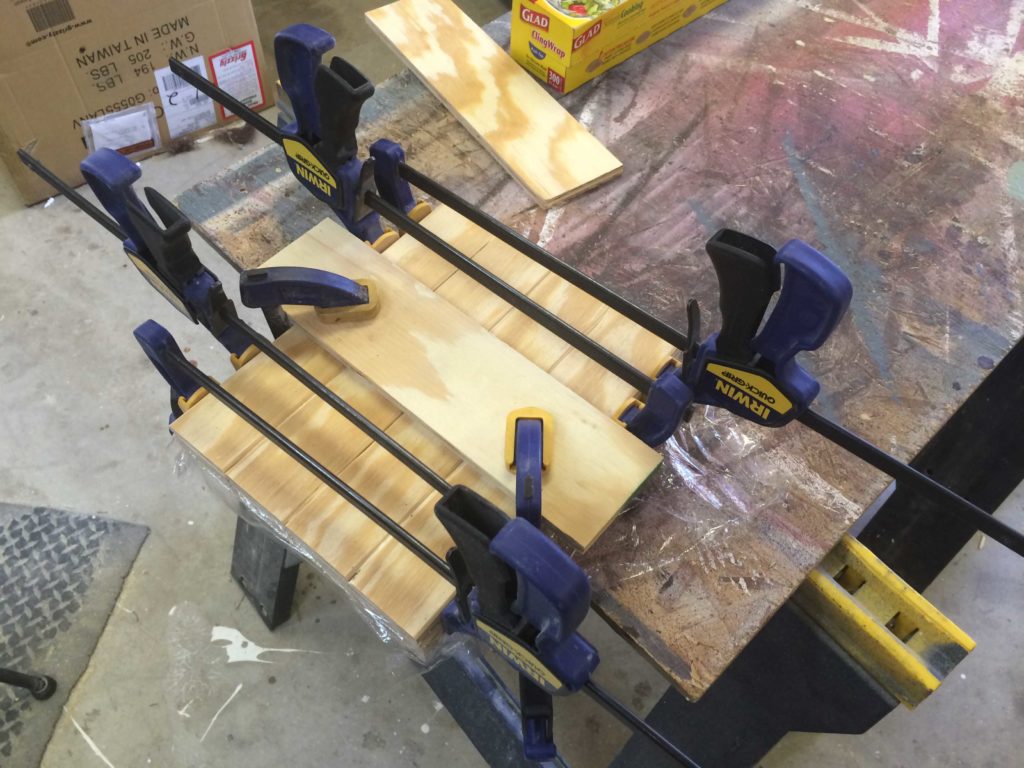 4) Once they were dry, I placed a protractor in the bottom corner and taped a piece of string on zero. Then I moved the string to 10 degrees and made a mark, then moved to the other side to repeat the steps. 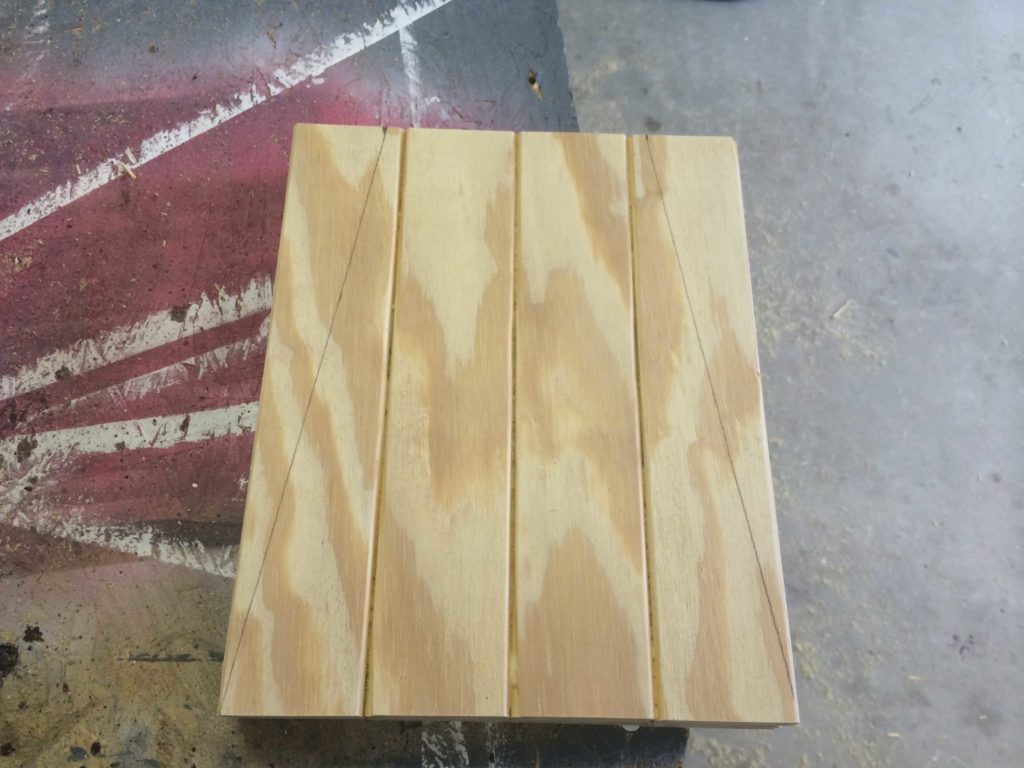 5) I stacked the four panels on top of one another and used my circular saw to cut both of these angles. 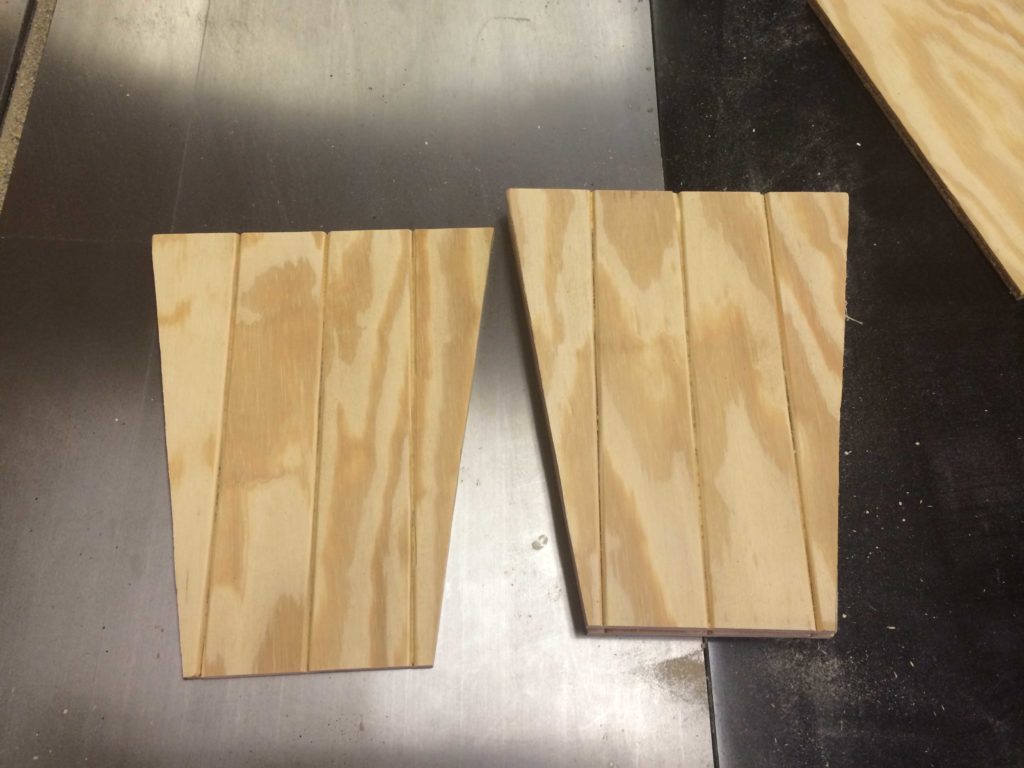 6) Next I took them over to my table saw, tilted the blade to 10 degrees and put a bevel on each one of the bottoms.

7) Now I was able to put the body together using glue and nails. 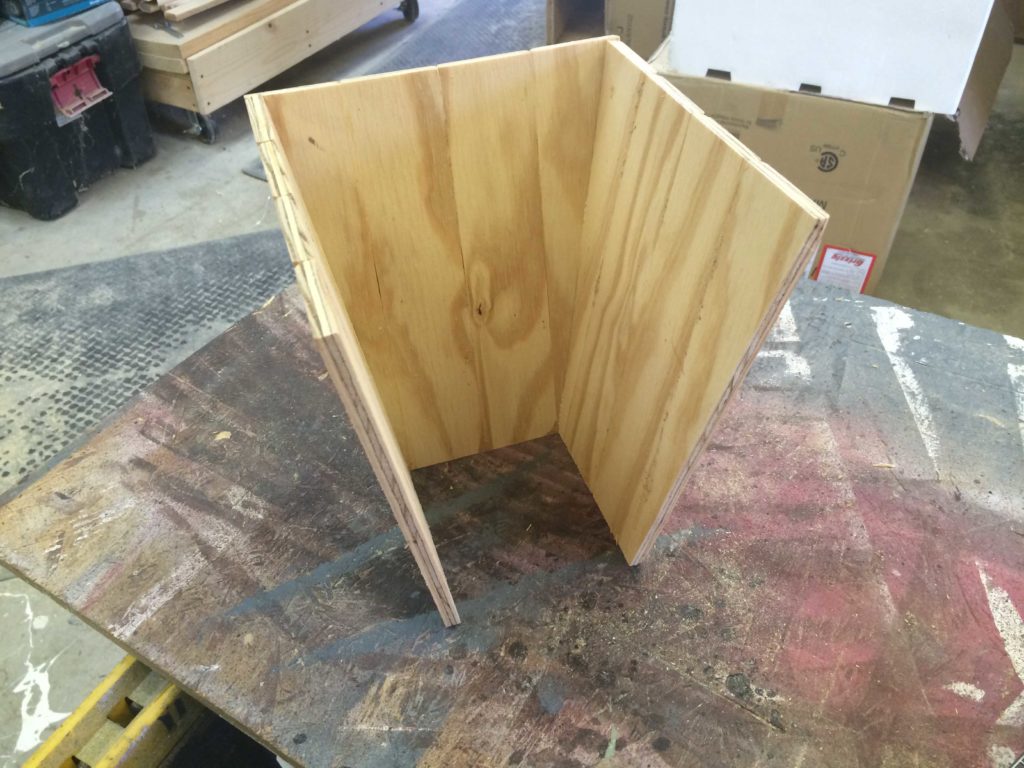 8) To create some trim, I grabbed some scrap 3/8″ plywood and cut 1″ strips. You will need 8 strips for the corners (the stiles) then 8 for the horizontal  pieces (the rails).

9) While at the table saw I tilted my blade to 45 degrees then put in a bevel on each of the 8 corner trim pieces.

10) Then I moved to the miter saw and set it to 10 degrees and cut the top and bottom of the corner pieces so that they will be flush when I attach them to the body. 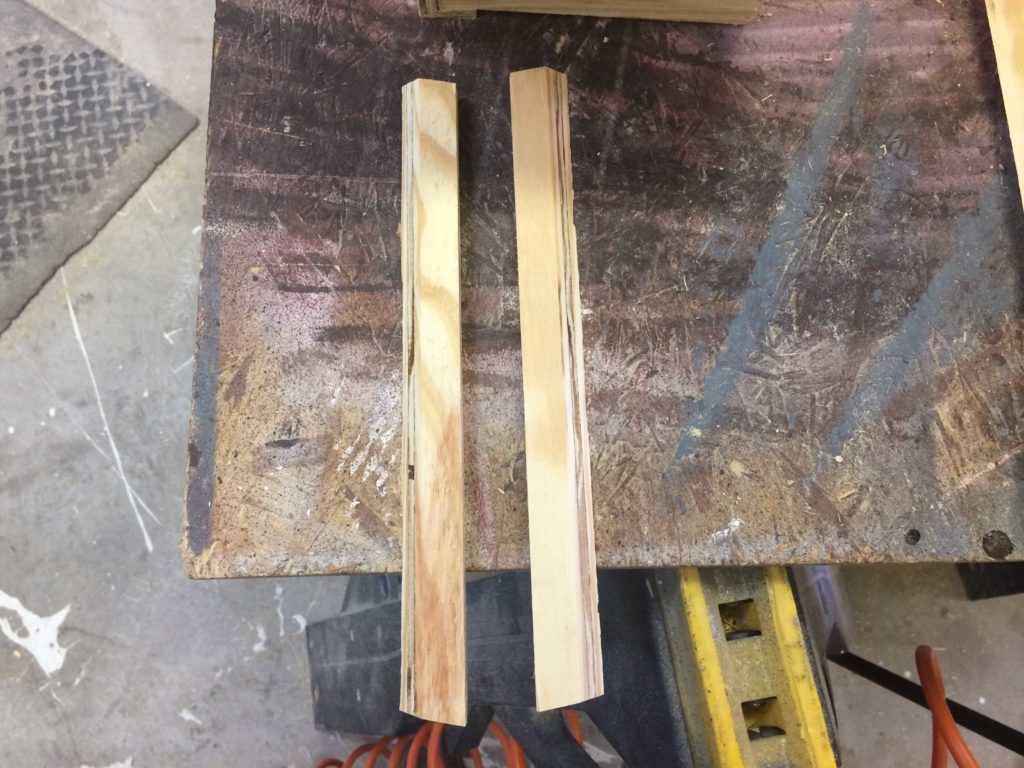 11) Before leaving the miter, I gathered all the left over pieces that were too slim to use as trim and cut them up to make the bottom.

12) I first glued then nailed on the bottom. 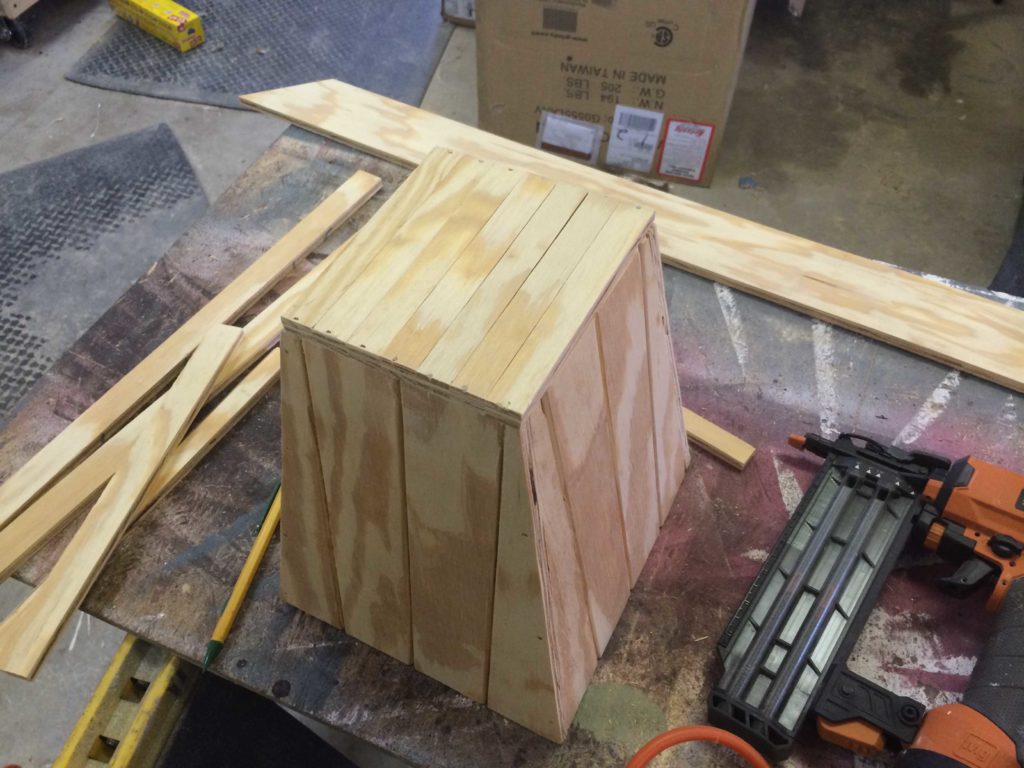 13) Then glued and nailed on the stiles. 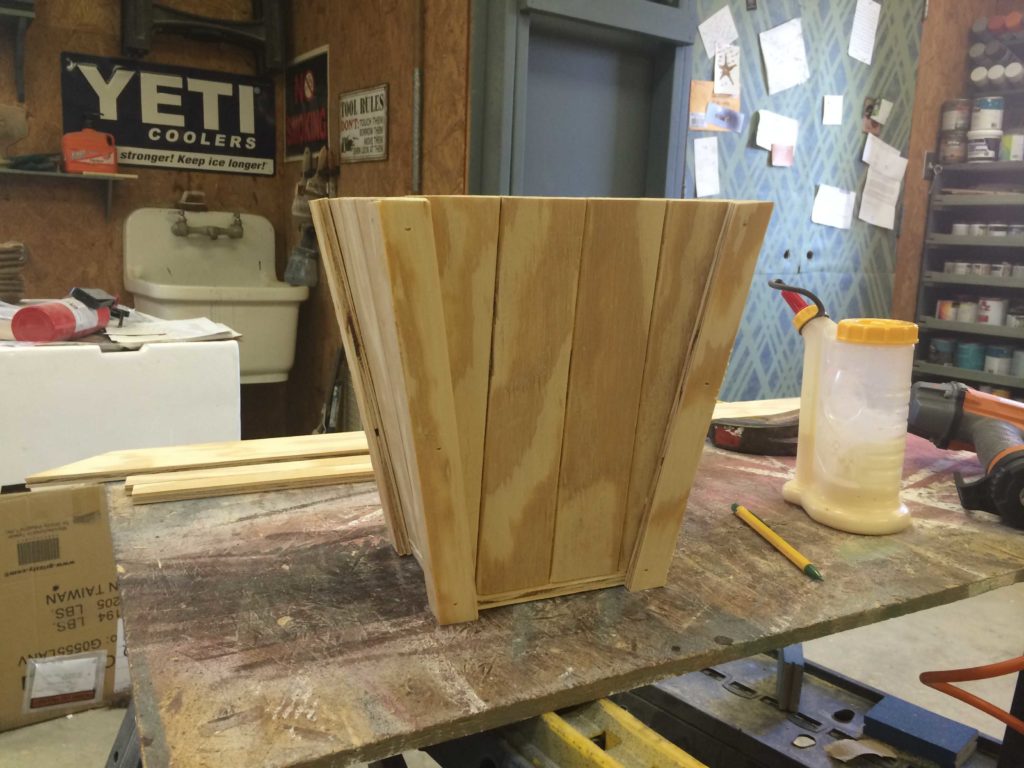 14) Then I glued and nailed on the rails. 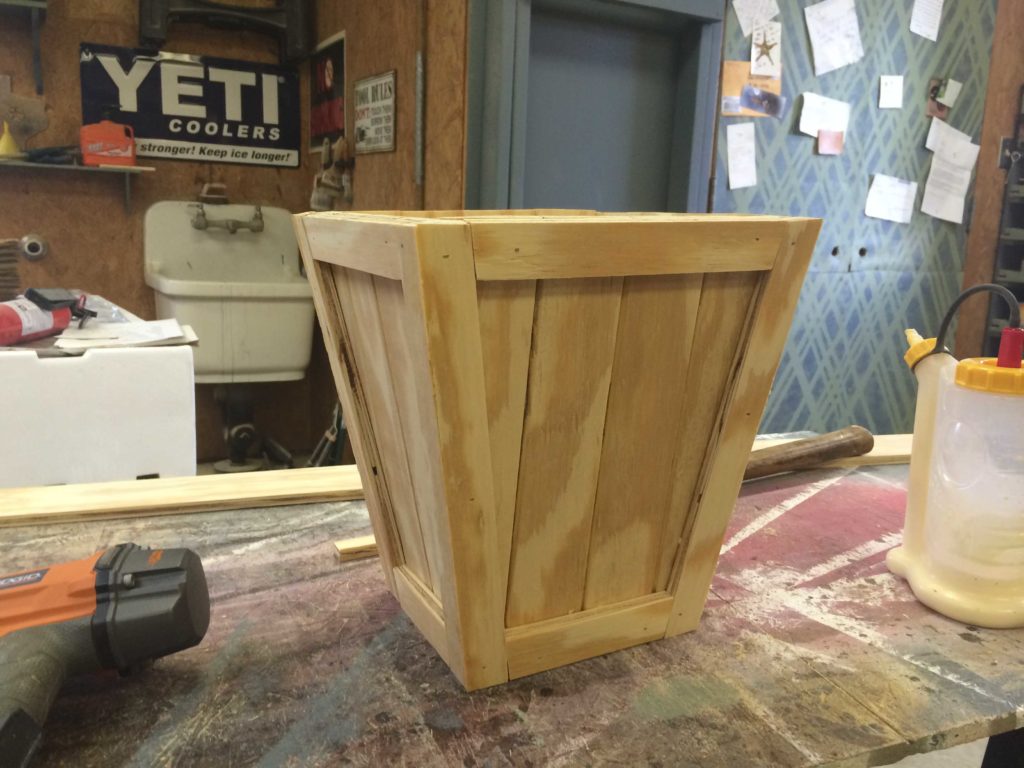 Now that was just a personal choice but I thought it would be easier to build one unit then cut it in half to create two, instead of building two separate halves. So next was to cut in half my creation.

15) Before that though, I needed to brace up the bottom or those bottom slats wouldn’t have anything to hold onto. So I grabbed some small scraps and nailed them in place on the inside. 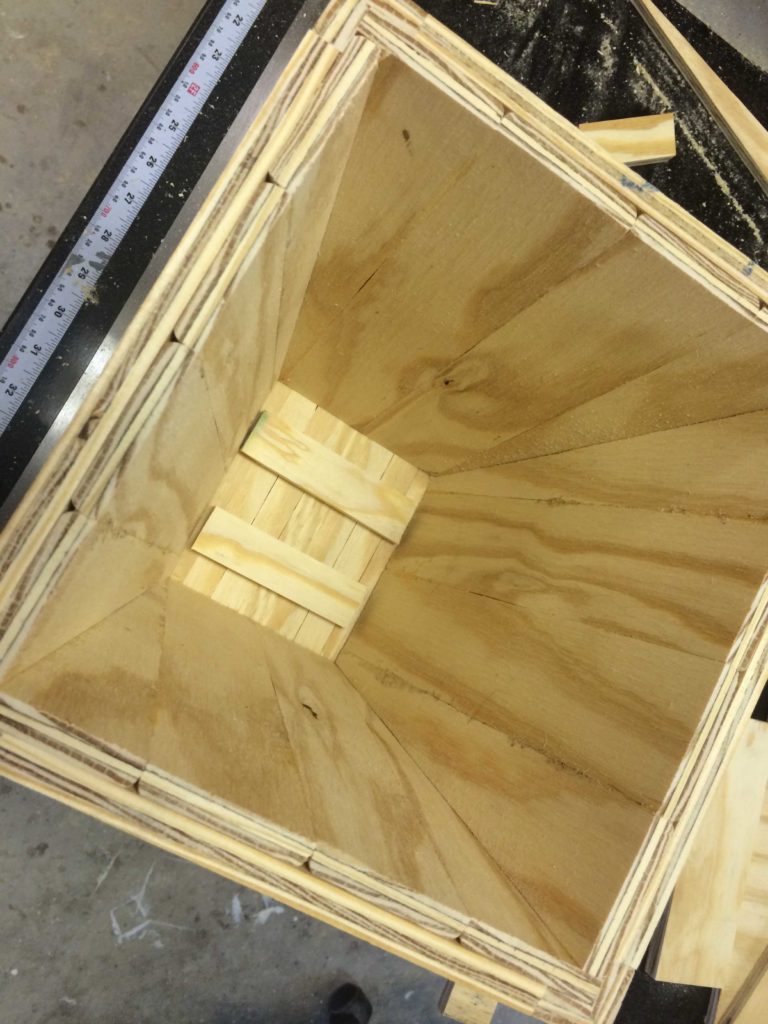 If you have a bandsaw then you can just run it through and take care of it in one pass….mine is still in the box so I had to use my tablesaw.

16) I pulled out my miter gauge and clamped on a temporary fence. Then I lined up my unit where I wanted it to be cut, and then nailed on a stop block so I would have a reference for when I rotated it to cut the other side. Once I had it lined up, I made one pass on one side, then flipped it over and made another pass on the other. Then I set it on it’s bottom and made one more pass. 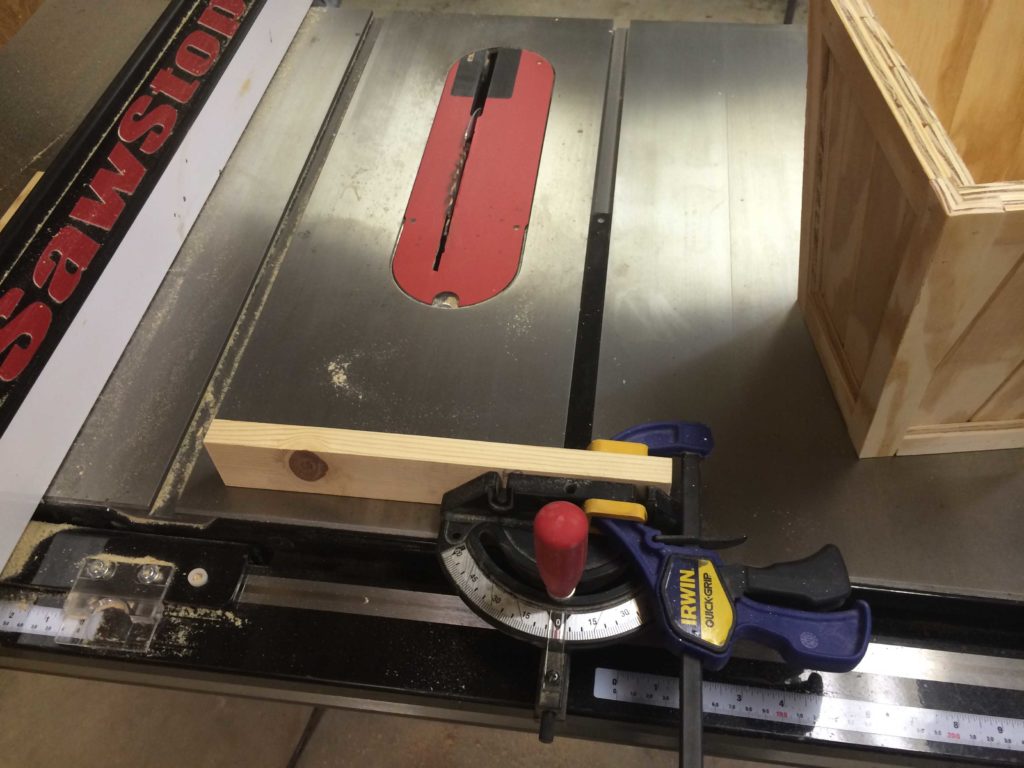 Now I have two halves. 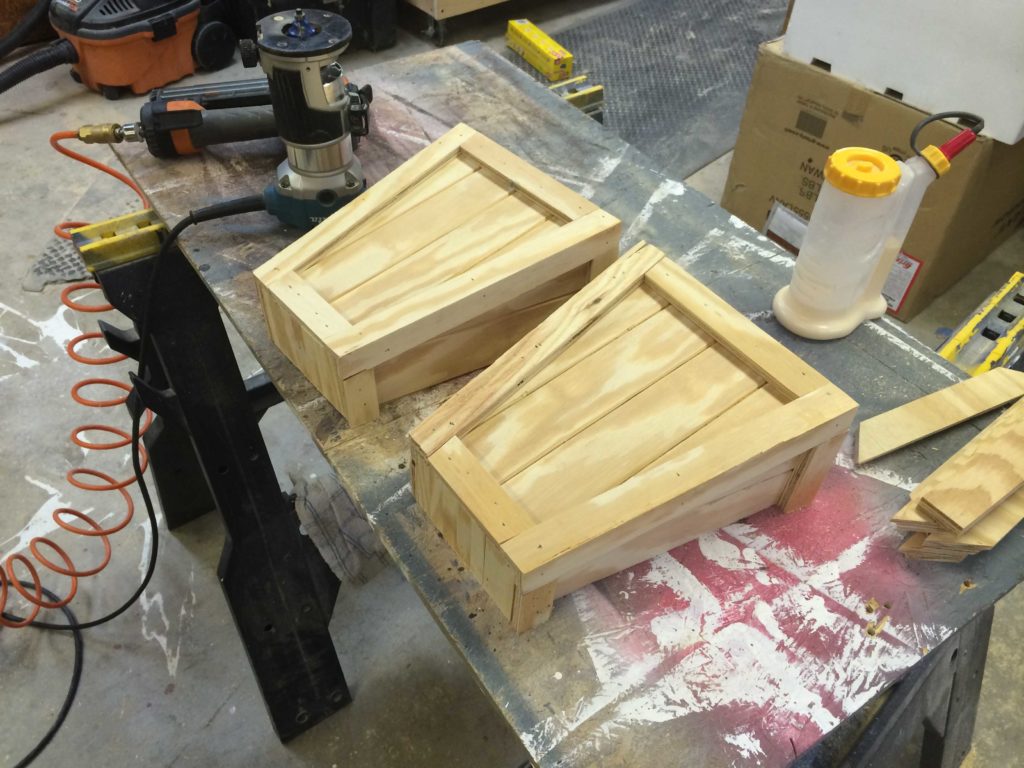 17) To give myself a way to hang it, I cut two more pieces (with 10 degrees on the sides), drilled a hole in the center, glued then nailed them on the back. 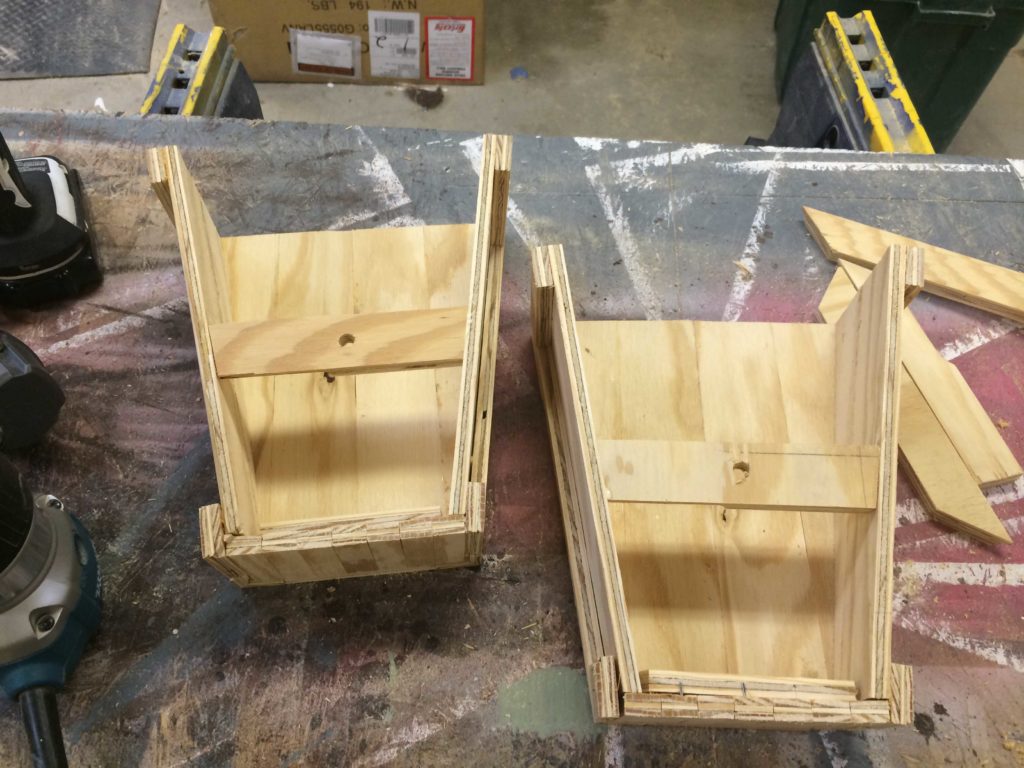 18) Next I filled in the holes with wood filler, then gave it a good sanding.

19) For a paint job I first laid down a coat of grey, then once it was dry acme back with a very light coat of white. Since I’m going for distressed, I didn’t lay it on solid. 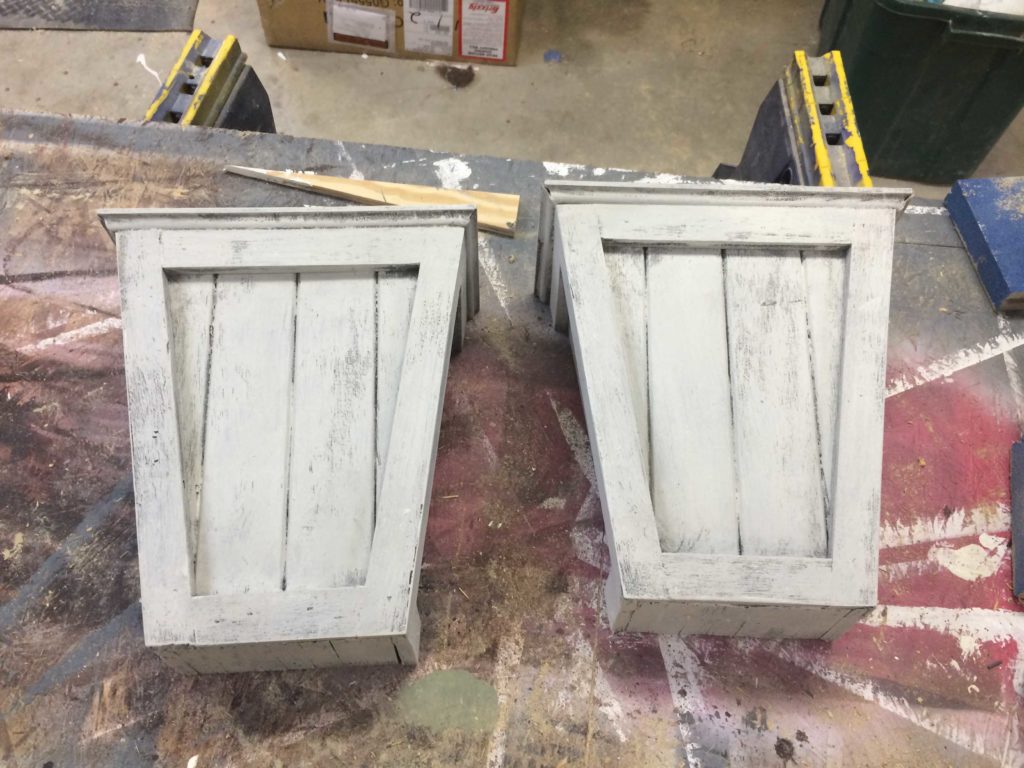 20) When that was dry i grabbed some Styrofoam and cut it up to fit inside. Then I bought some flowers and made an arrangement! 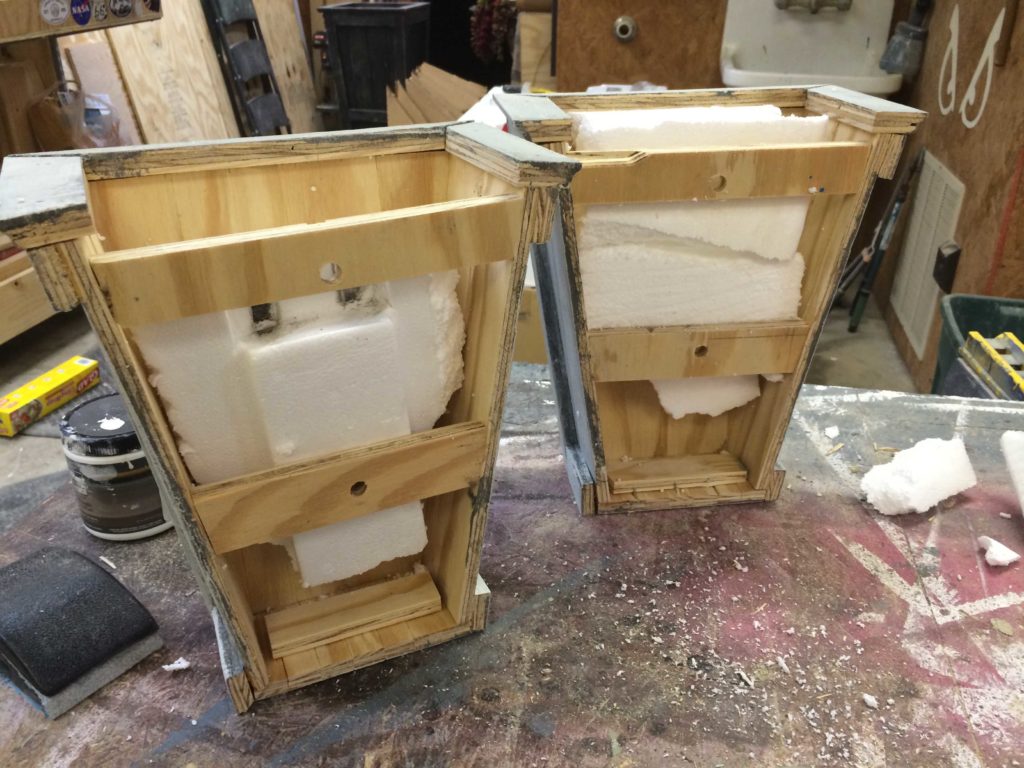 (Here’s the source of my stryofoam) 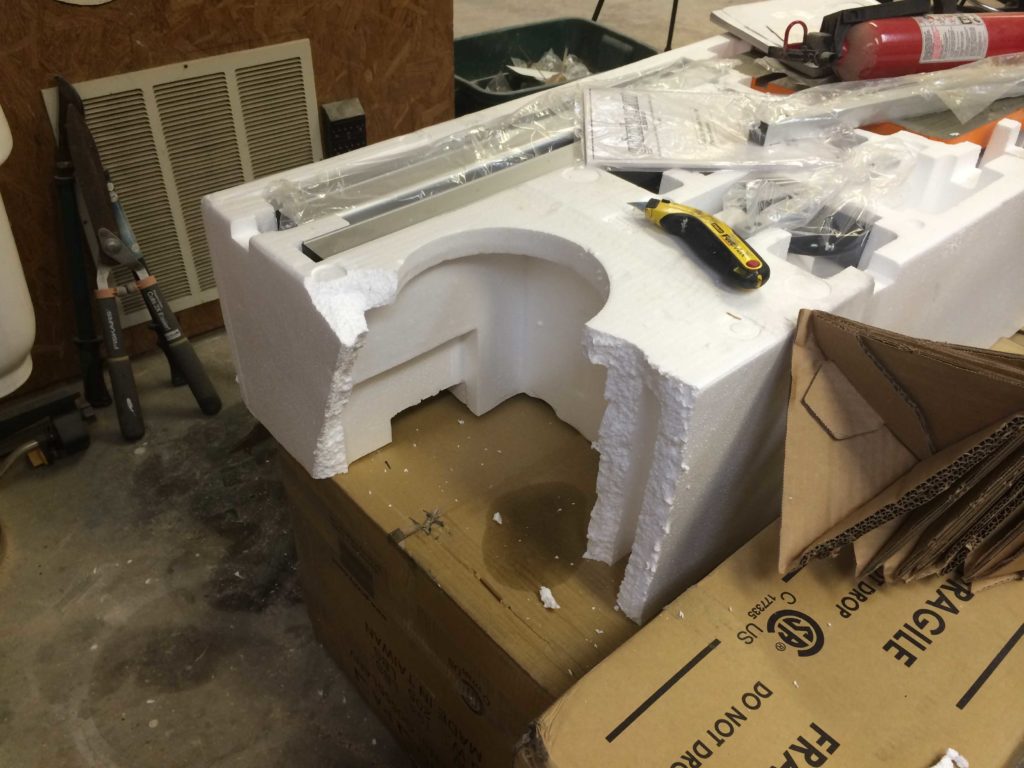 21) Last thing was to take them inside and mount them on my wall. 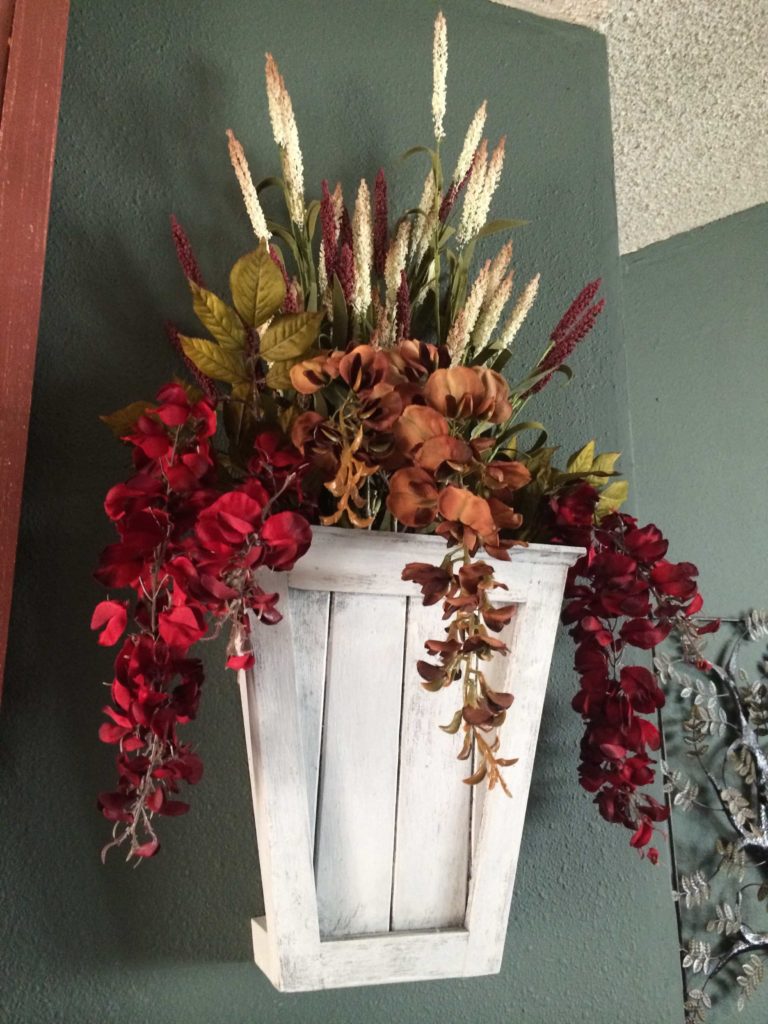 I think these look much better. Just my opinion though. 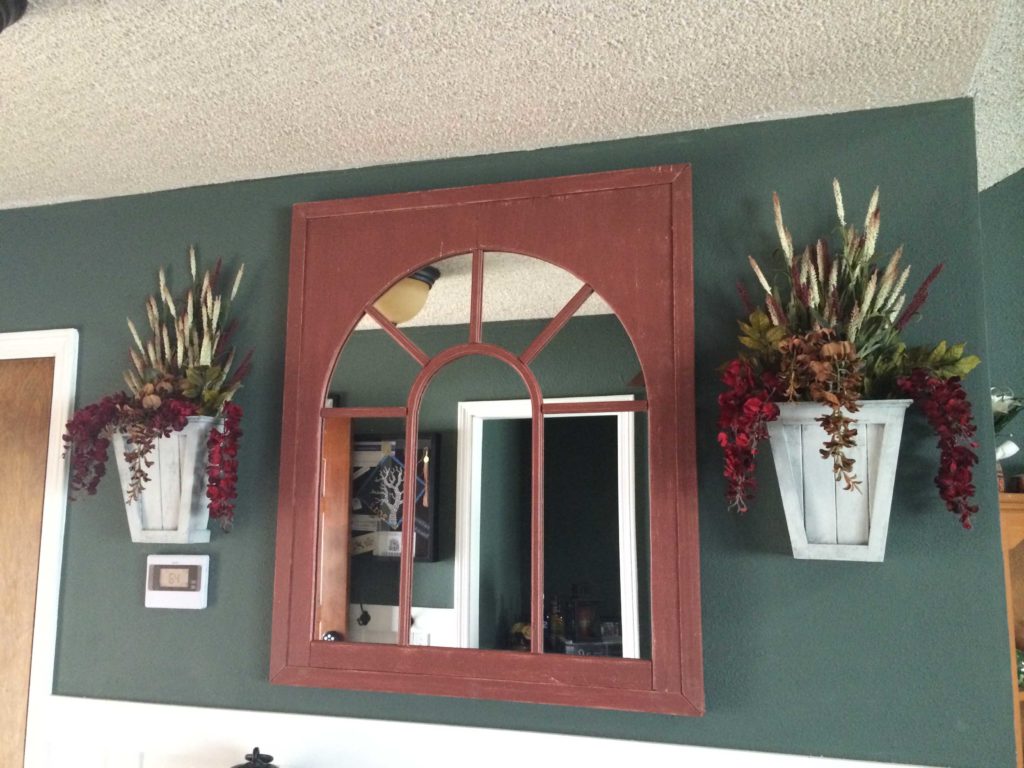