Build a Shop Lathe Stand With Pull Out Grinder Shelf

If you’ve been watching my shop you’ll know I brought a lathe into the shop and just temporarily set it on one of my workbenches. However I need my workbench space so this week I decided to build a dedicatedly stand for the lathe to go.

I want to keep the construction simple however it needs to be sturdy so that it doesn’t rock and move around whenever I’m using the lathe. The frame will be built from 2x4s and all the flat surfaces and dividers from 3/4″ plywood. Also, I want to include a dedicated spot for my grinder to go while I’m building something. From what I hear, sharpening turning tools is a constant so having it close by and handy will be a plus.

Here is an overview of the building process:

I first grabbed all the two by fours, set up a stop block at the miter saw, and cut all my pieces to length. 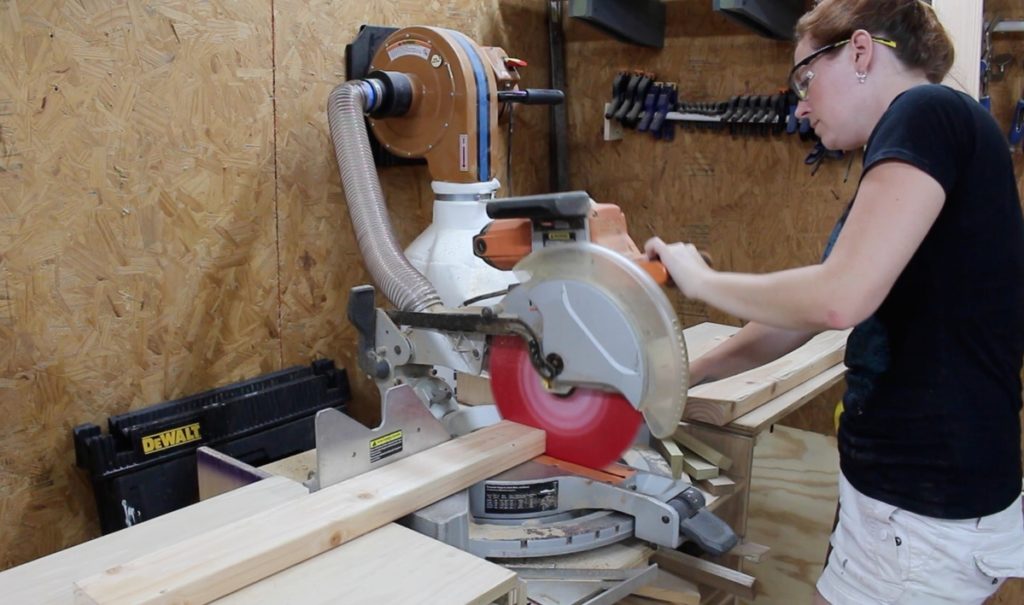 To make the joints on the workbench a little sturdier, I used a lap joint which is essentially where you notch the material for the joining material to mate to. To make this go quicker I use my data stacked in my table saw. Tip: I recommend using a temporary fence as a stop block to make these cuts. Another option would be to use a regular butt joint for all these joints. 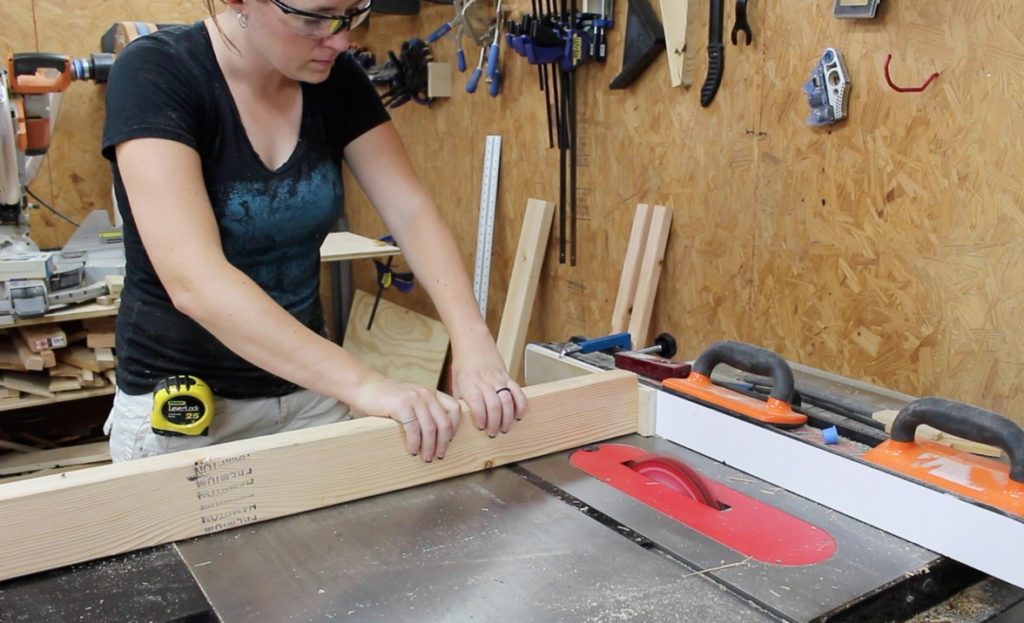 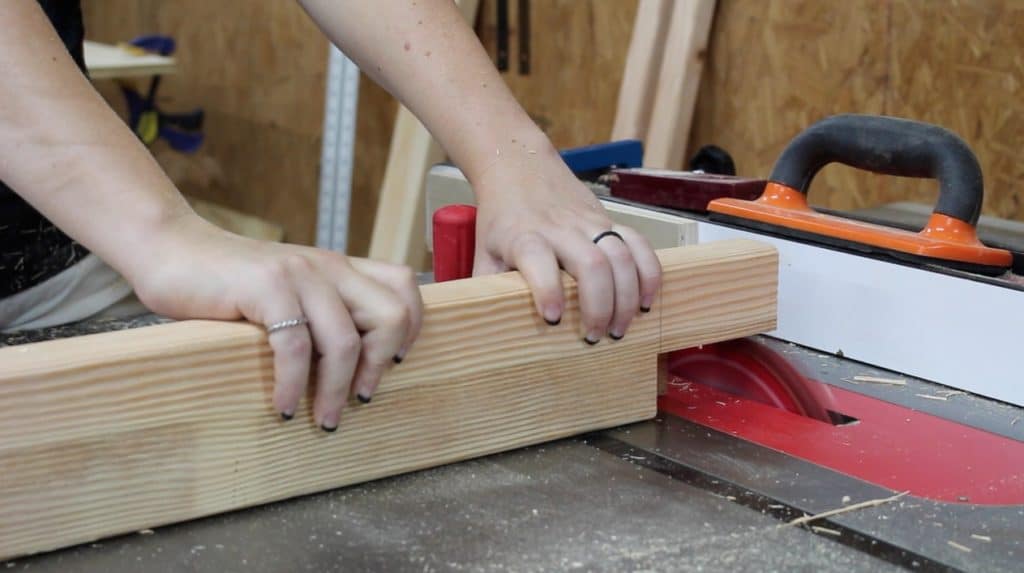 Once all the pieces were cut, I could start assembling the frame. I started by joining the pieces that make up one side. I use glue and two screws on all joints. I also used a countersink bit to predrill holes. After one side was assembled I repeated to assemble a second. 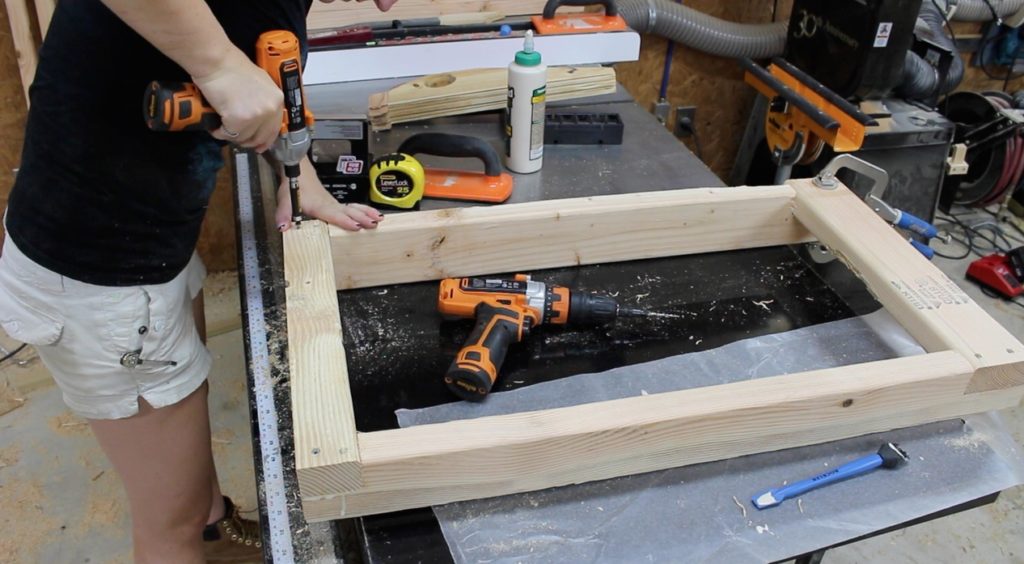 I continued assembling the frame by adding the lower supports. I added two on the bottom as well as two on the top. 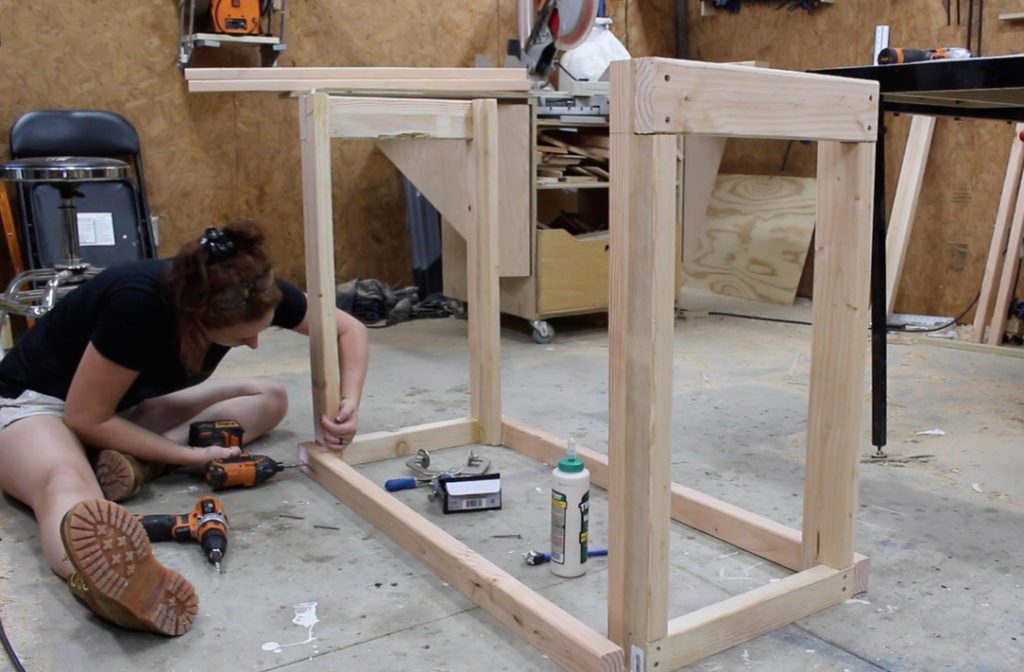 The back is one solid joint of material however on the front I wanted to add drawers so before adding the piece of wood I took it to my bandsaw to cut out the two openings for drawers. Note: If you are tall enough to make your workbench taller then you can actually repeat this on the bottom as well and add in another two drawers. 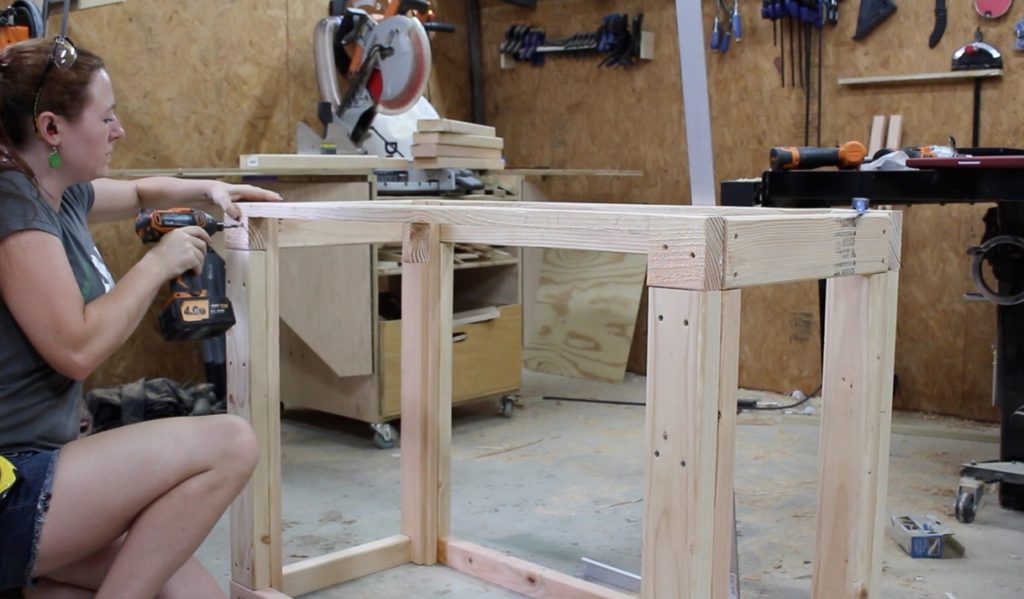 Note: I added this front joint with the openings facing down, but later decided to change the design and face them up. Just letting you know in case you are building it and are going off the photos/video. You’ll see later when I decide to switch it around. 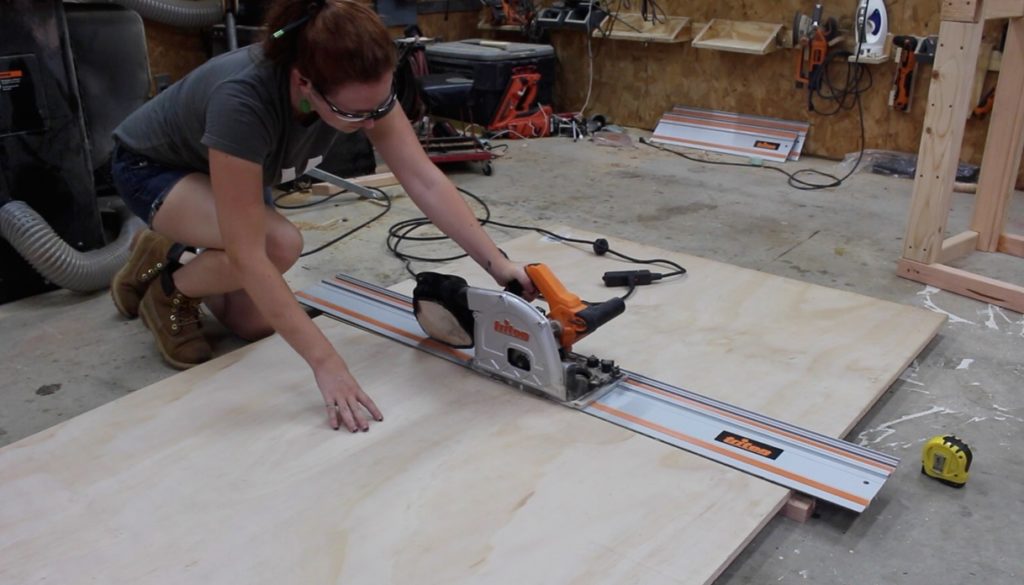 A lot of the plywood pieces have a dado cut, so before moving forward I cut in all the dadoes needed on the different pieces.

I grabbed the piece that will make up the bottom shelf and use a jigsaw to cut out the four corners so that it could fit into place. I first did a dry run to make sure it was good fit, then used glue and screws to attach it. 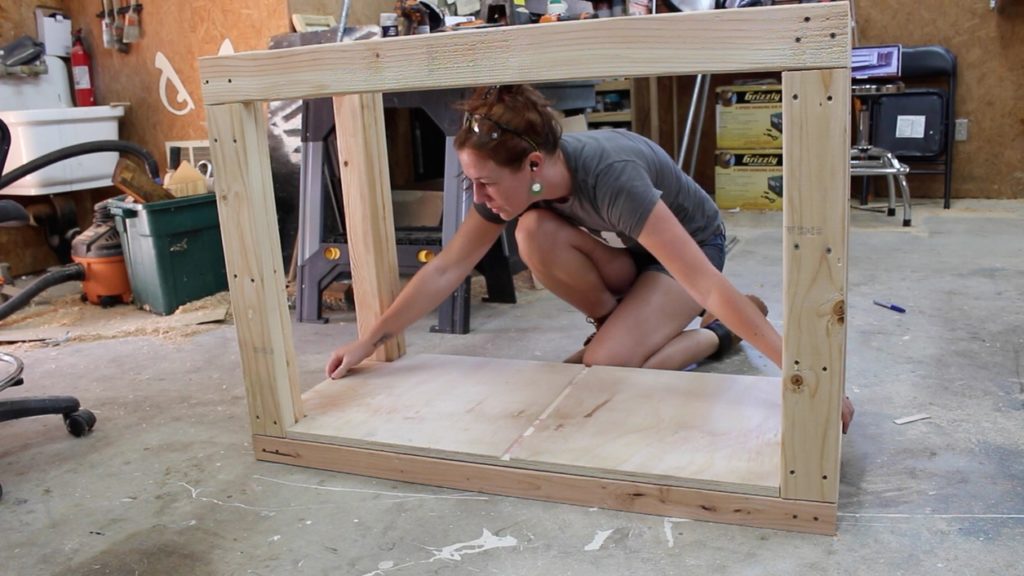 Next I inserted the center divider that will divide the two cabinet of the workbench and glued it into place. Note: once you glue in the center divider, you will need to quickly, before it dries, to add in the shelves. 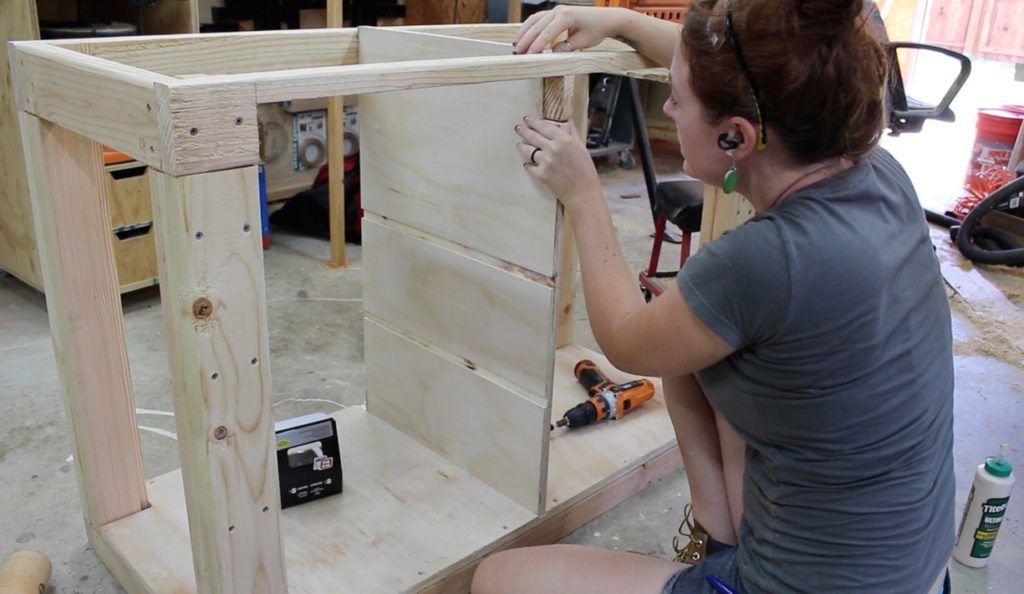 Next use glue and screws to attach the boards that will close in the side of the cabinets. I close in the cabinets so that the items been stored on the shelves would not have an opening fall out of, but also to give the sliders (for the drawers) something amount onto. Just as a bonus this also turns the outside of this area into a nice recessed place to hang/store items. 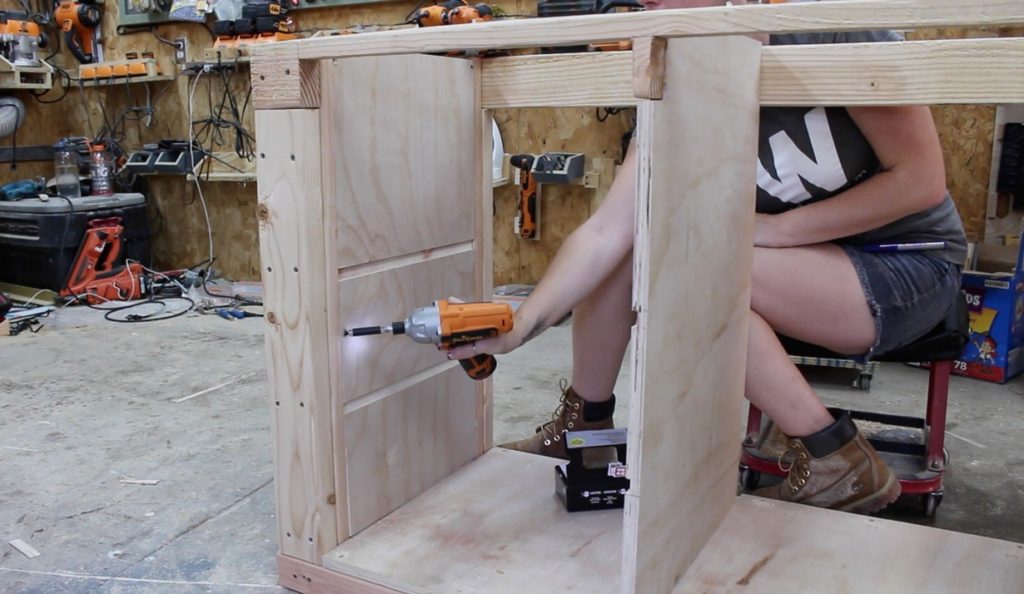 Now slightly tilt the center divider so that you can maneuver the two shelves into their places. Once the two shelves are aligned with their dados, I used a mallet to seat them all the way. 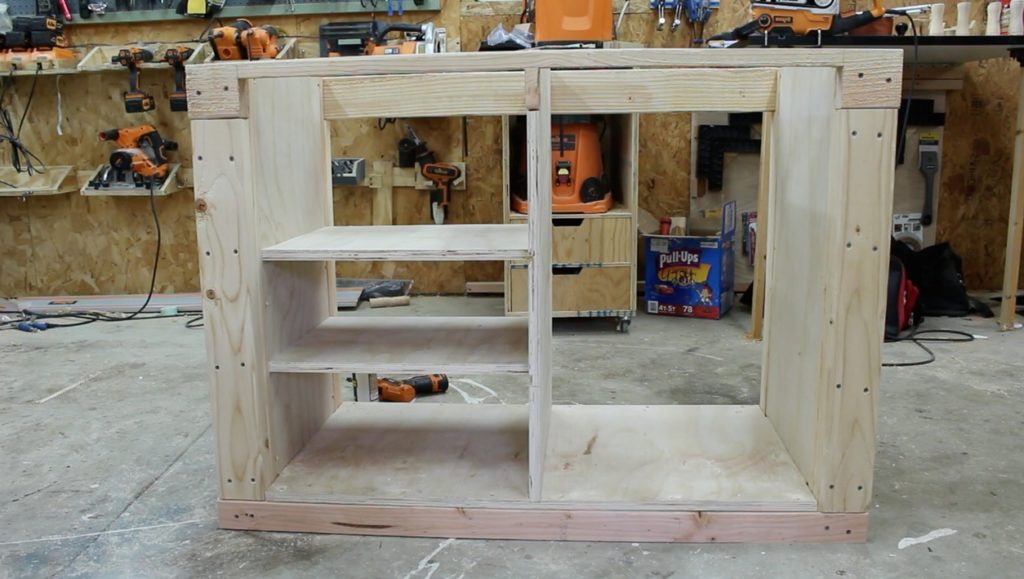 I didn’t make the shelves come the full depth of the cabinet because I didn’t want to constantly be bumping them with my knees. However, when I cut the dados for the center divider I took the easy route and used my table saw to cut the dados fully across the board. This means once the shelves are in place, there is a good few inches of uncovered dado, which doesn’t look good. To avoid this completely you could use a router and stop the dado exactly where the shelves end oooor, you can do like I did and cut down a scrap chunk of plywood to fill in the slot. I glued these in place then use a pull saw to cut them off flush. : ) 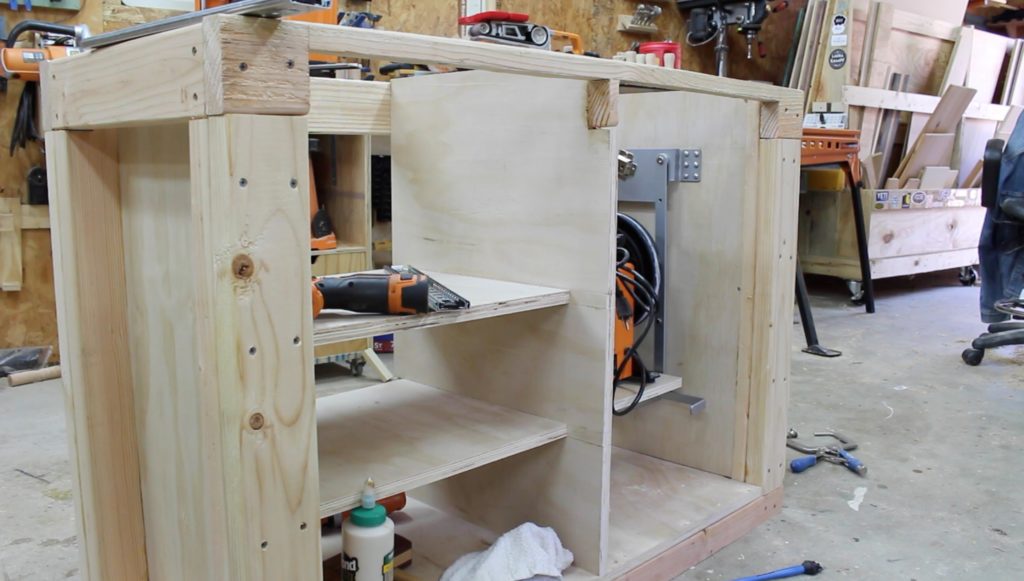 With the left of the cabinet done and moved over to the right, Which I designed to specifically hold my Triton wet stone grinder. I wanted to store the grinder in the stand if possible since it’s constantly being used to sharpen turning tools. To accomplish this I’m using bracket made by Rev a Shelf called Mixer Lifts. They typically hold kitchen aid mixers in the bottom of kitchen cabinets. They will support up to 60 pounds and with my grinder only weighing 30, they workout perfectly.

I started by mounting the brackets on the inside of the cabinet, using the hardware that comes with them. 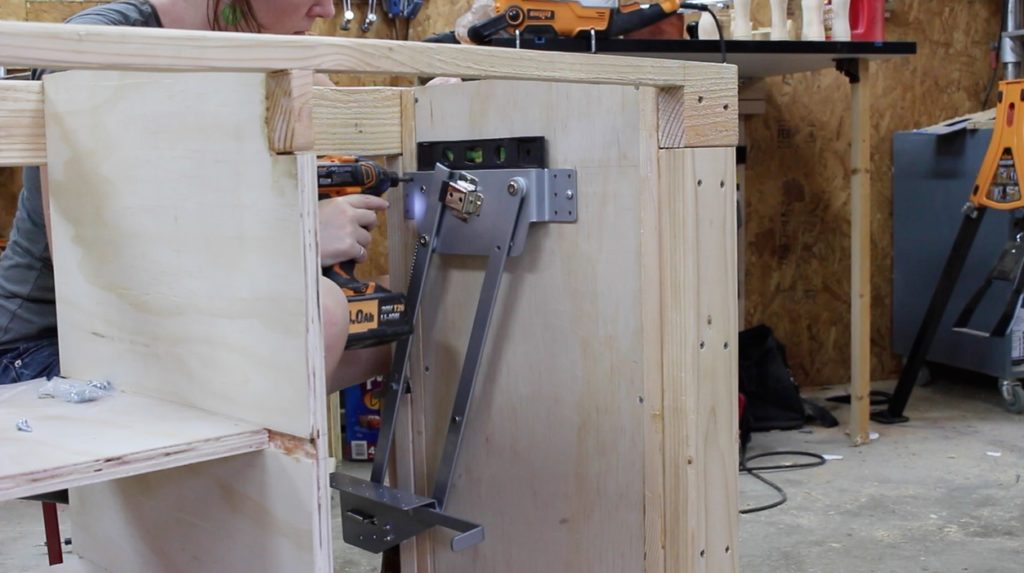 These brackets don’t hang perfectly vertical but instead, they swing pass which means the brackets would poke out the back of my workbench. I couldn’t move the brackets forward inside the cabinet or the grinder would be positioned really far out from the workbench when it was in the up position. So to fix this I grabbed two pieces of scrap 2 x 4 and attached them to the inside of the cabinet to act as a hard stop for the brackets. 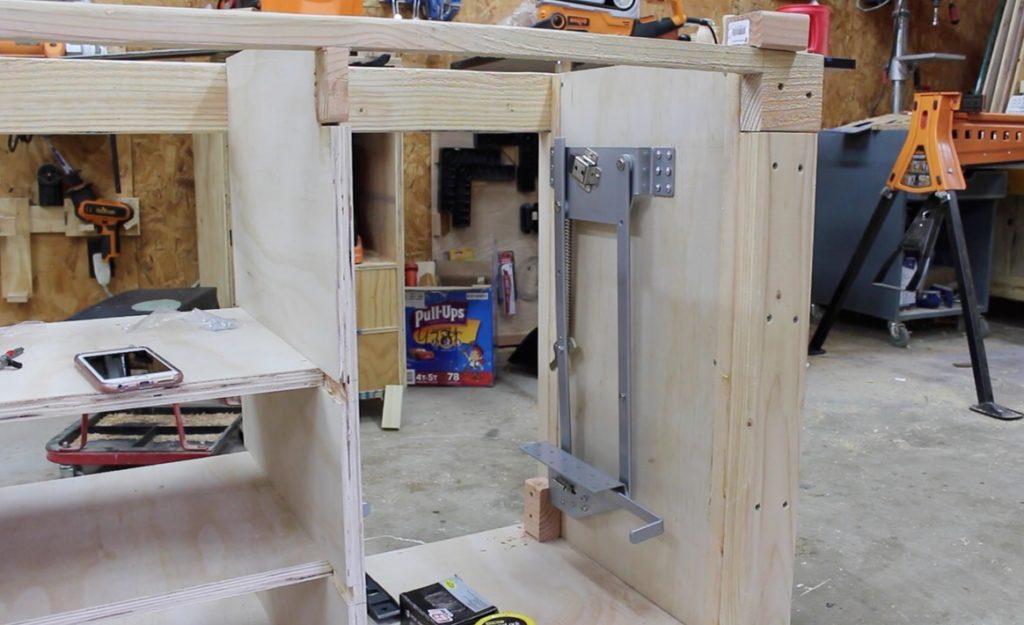 Once the brackets were mounted I cut a shelf for the grinder to sit on and attached it from the underside. Again using the hardware that comes with the brackets. 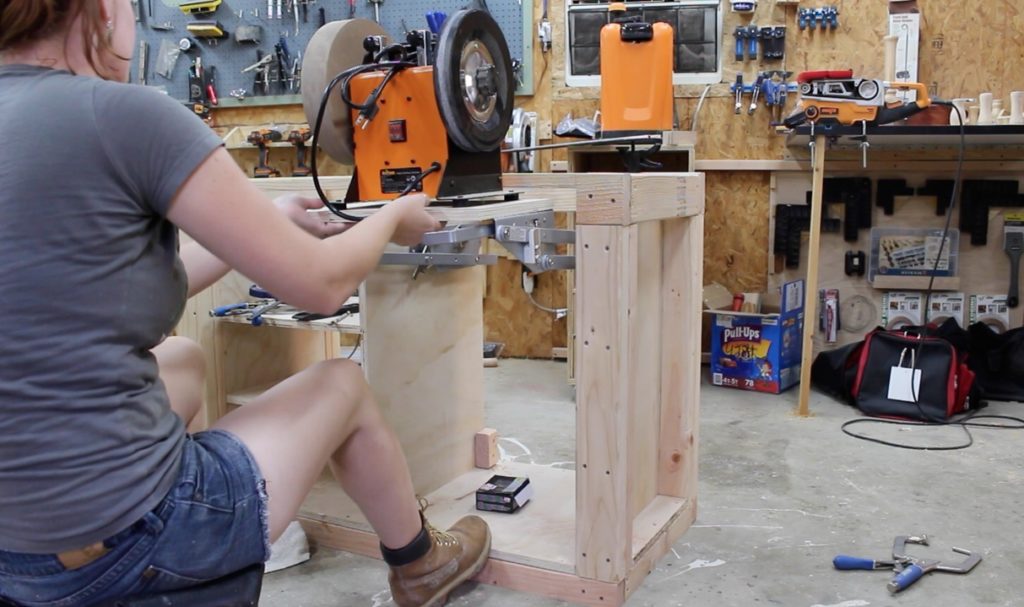 And look how awesome that is. To be honest, when I was designing this I wasn’t sure if this was going to work out or not so I was really pleased at this point in the build because it was all going smoothly. 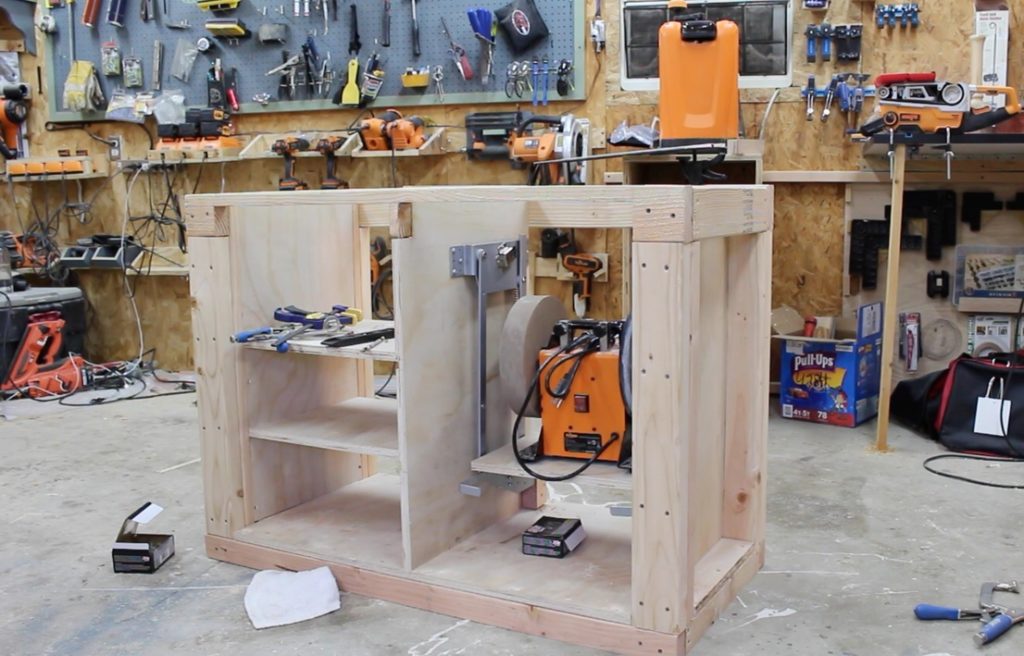 After making two drawers I attached one portion of the sliders to the cabinet, then attach the drawer to the other portion. 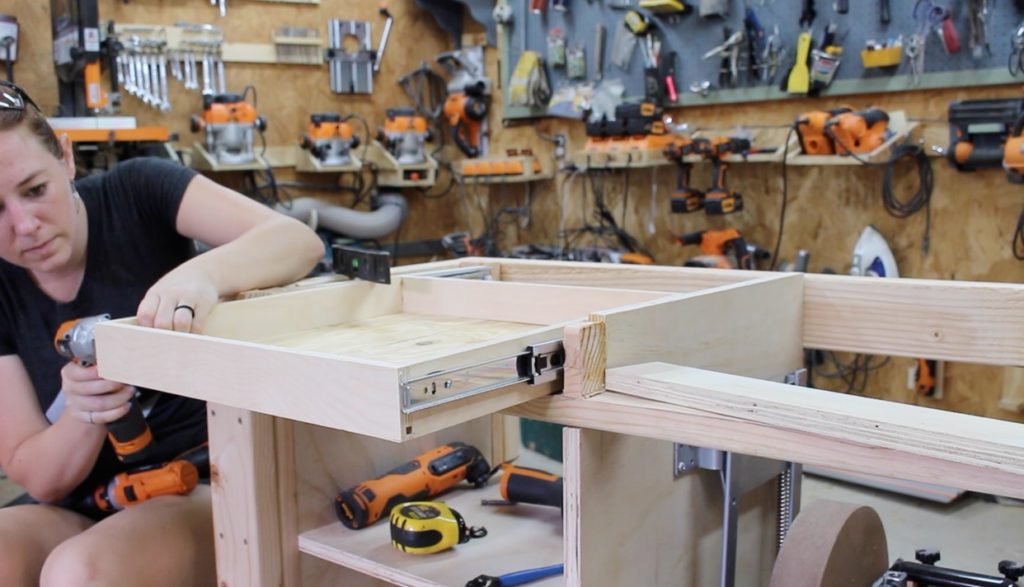 Ok now to add the top. I’m using two sheets of 3/4″ plywood for my top. Since I’m using plywood I decided to attach solid wood around the edge to hide the plywood grain. I use the front edge board as a reference on where the plywood top needed to be positioned. 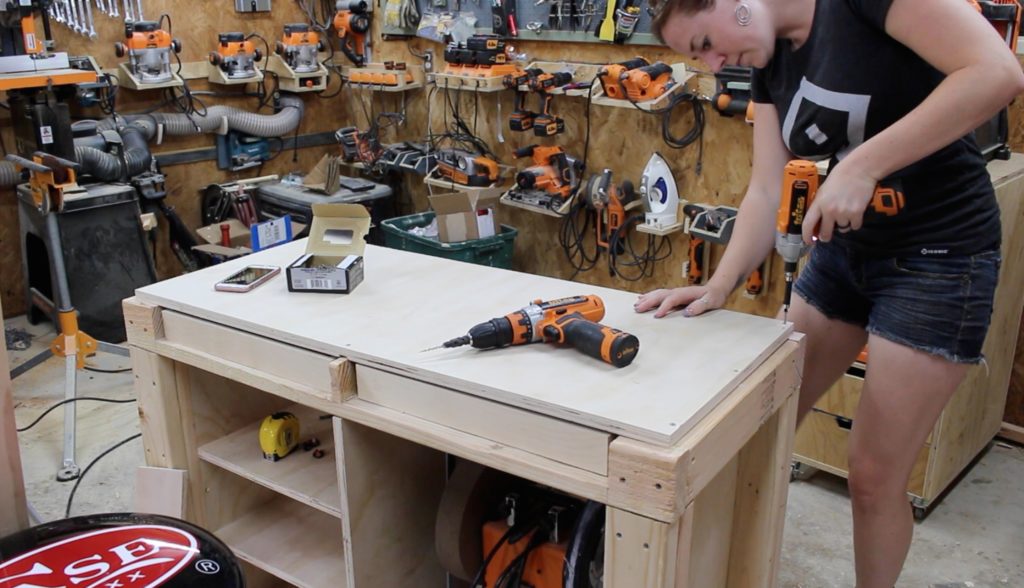 Then I put down the second board directly on top making sure it was flush on all four corners before attaching the screws. 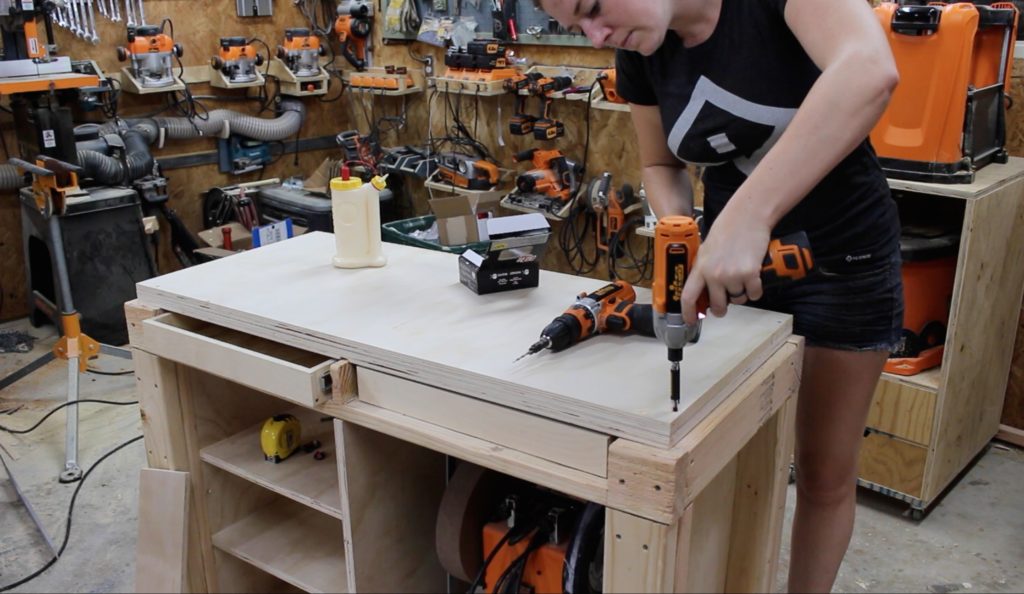 Next I cut and attached the edging material around the perimeter. I’m using select pine because it’s what I had in my shop, but anything can be used, even a ripped 2×4.

With the top in place now I could add the face frames for the drawers. I cut them to size and used hot glue to temporarily attach them. Once the hot glue dried I moved to the inside and attached them permanently with screws. At this point you can add any knobs you like. Since I have a lathe, I decided to turn some. 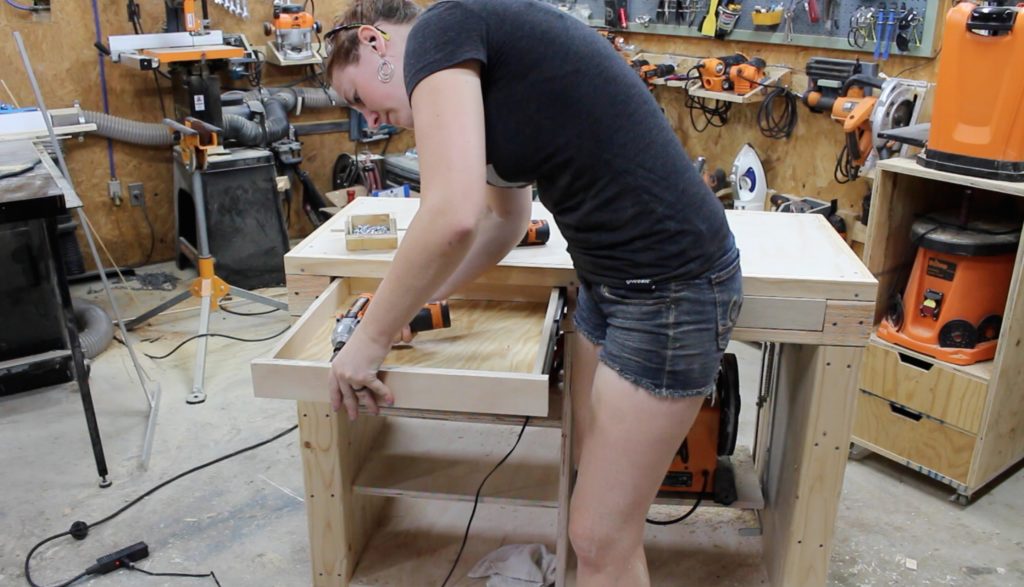 I love to make everything mobile in my shop that I can, but I didn’t want this bench to always be sitting on casters because it needs to be very sturdy and stable, so I am using something called step down casters. These allow you to step down on a handle and engage the casters but when you flip the handle up, the casters move out of the way and the workbench now sits steadily on the ground. I don’t think I will be moving the work bench very often but it’s still nice to have the option.

So last thing to do was move it in place and load it down. I added a pretty cool tool holder that Rockler makes directly to the bed to hold my turning tools, the few blanks I have to the shelves, I threw a few things in the drawer (I’m sure they will clutter up quickly), then I tested out my grinder by sharpening all my tools. : D 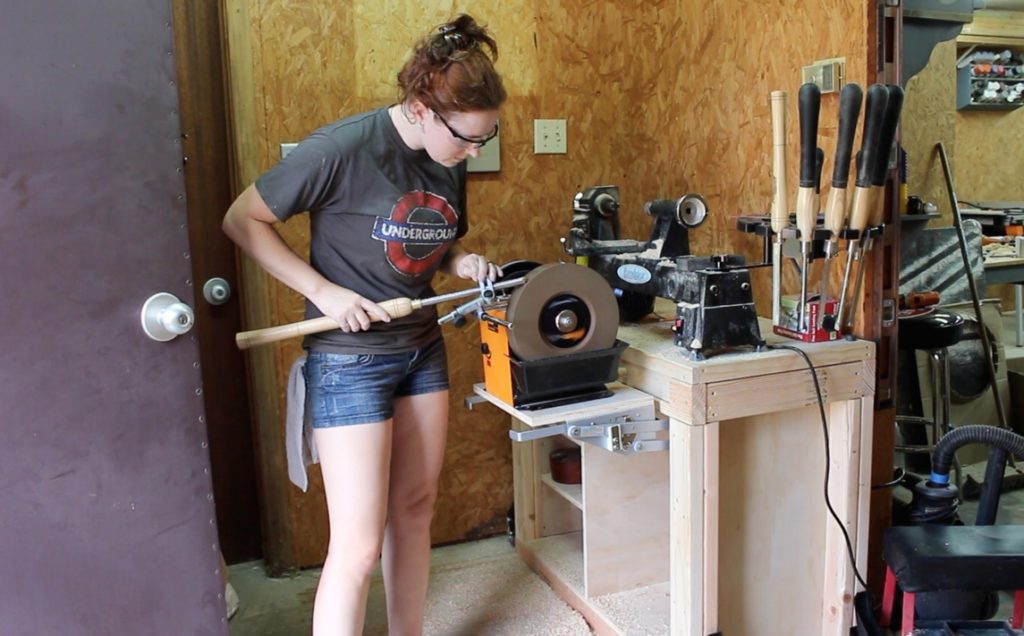 Overall I’m really pleased with it. It isn’t the prettiest thing to look at but it’s rock solid and doesn’t move around at all when turning. Also, the grinder popping out worked out far better than I imagined. The mixer lift brackets are steady and have no vibration. I think they come out to a great height when in the open position, and are super simple to release and stow away.

I had plans to add a folding wing on the right side of the lathe stand so that I could add on the bed extension when needed, but I ran out of time. So I might revisit this project in the future and add a few more bits and bobs to improve it. If you would like to build this lathe stand, don’t forget I have a set of plans available!