These seats are actually something I’ve been wanting to tackle for a while. They are inspired by a fabulous NY based furniture maker named Ethan Abramson. He has these stools he builds that he calls Maze Stools, that are made from different woods and have a very random yet elegant look to them. With Matt Cremona and I only having a single day to knock something out, I figured it was the perfect project. I also thought it would be cool to incorporate a scrap from Matt’s shop so I told him to toss something into his suitcase for me. Of course, it being Matt he brought me a beautiful piece of airdried walnut that he milled himself. 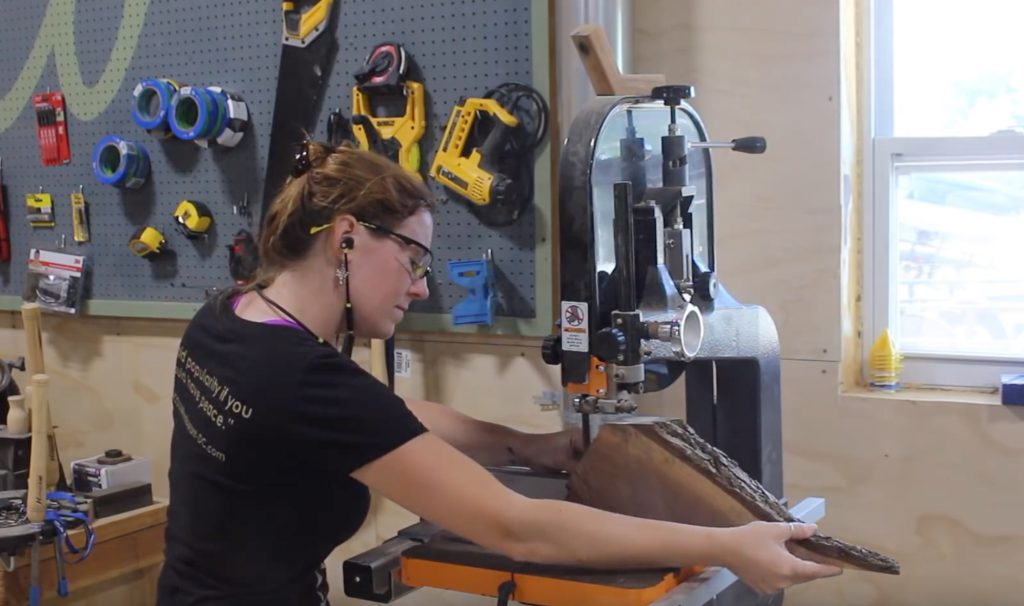 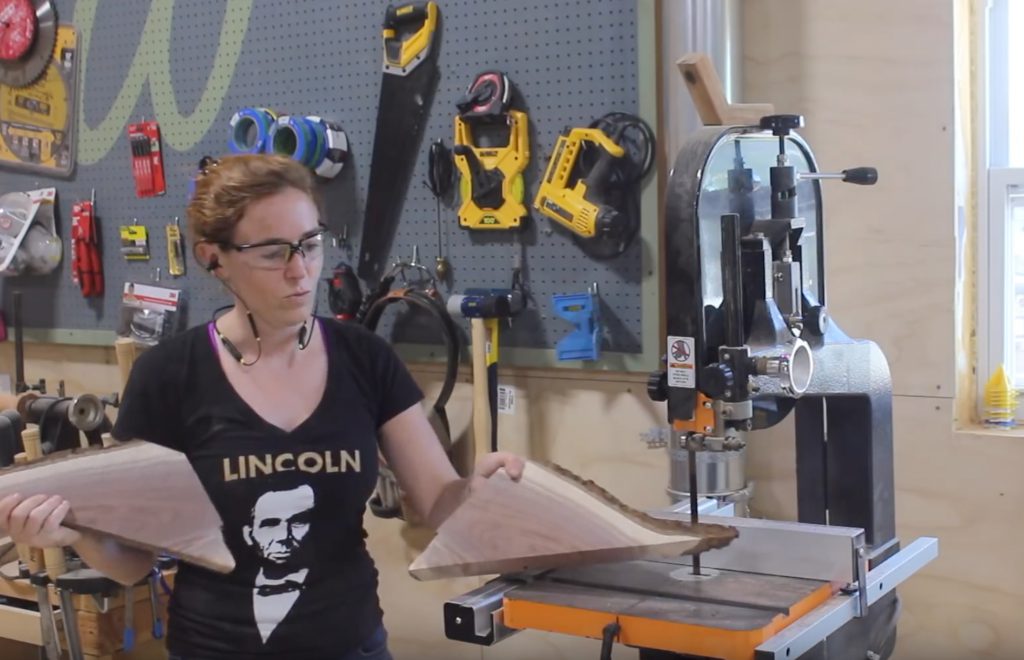 To get started we rounded up some other cut off of hardwoods from my lumber rack. I had two good chunks of walnut then found some maple and Matt found some small pieces of curley maple. We divided them up then started playing with our designs. The great thing about this project is there is no right or wrong, mine is pretty simple whereas Matt went a little crazier with his, even throwing some end grain into the mix. 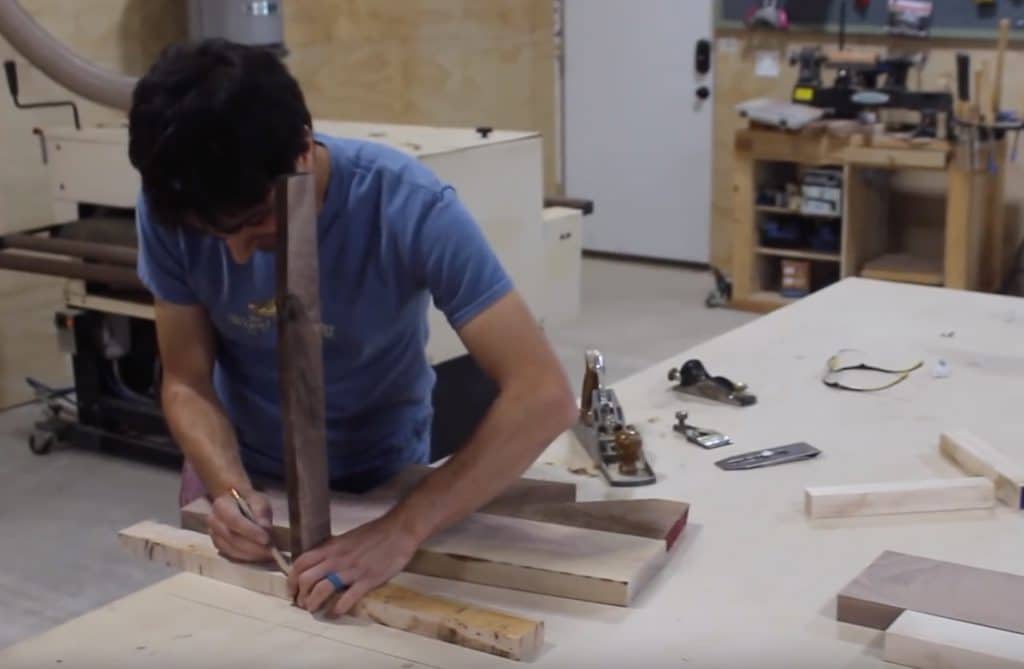 Since we are dealing with scraps, almost all the boards are different thicknesses. Later we will plane our seats down but right now I just got the boards close by resawing them at the bandsaw.

I was aiming for my seat to be around 14” so while I was building up mine I would use a tape just to make sure I was getting the weigh and height needed on the initial build up. Once that looked good, I started playing with adding more to the design. I wanted a strip of maple across the top so I grab a thinner strip, placed it where it looked good and used a pencil to mark on the bottom walnut, it’s location. Then I took it over to the table saw and cut along these pencil marks. This allowed to insert the maple strip where I removed the material. 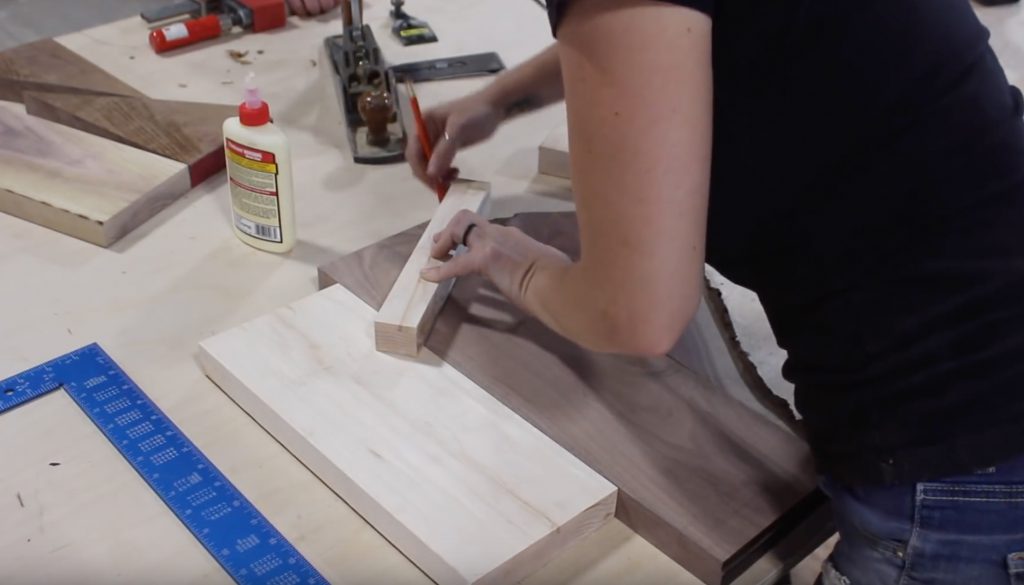 With the general arrangement of our seats figured out, we started on the first glue up. Since I don’t yet have a jointer, we used my crosscut sled at the table saw to get the glueing edges nice and flat then started clamping things together. This part is a little funky because lots of things are cut at angles so they want to slip and slide once you start applying pressure with the clamps. But! We both played with it enough and got things to hold together. 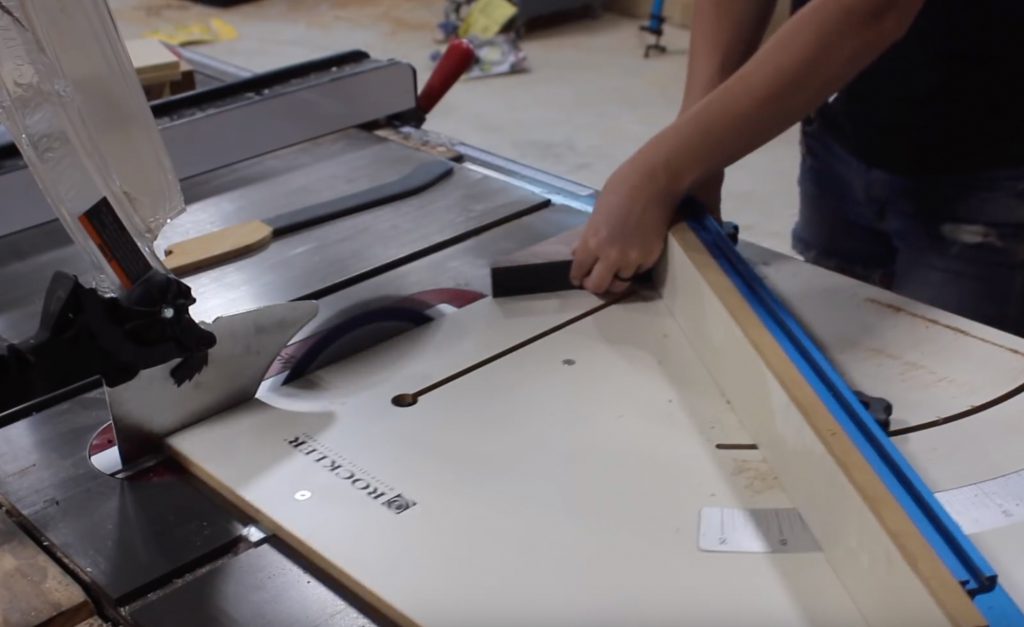 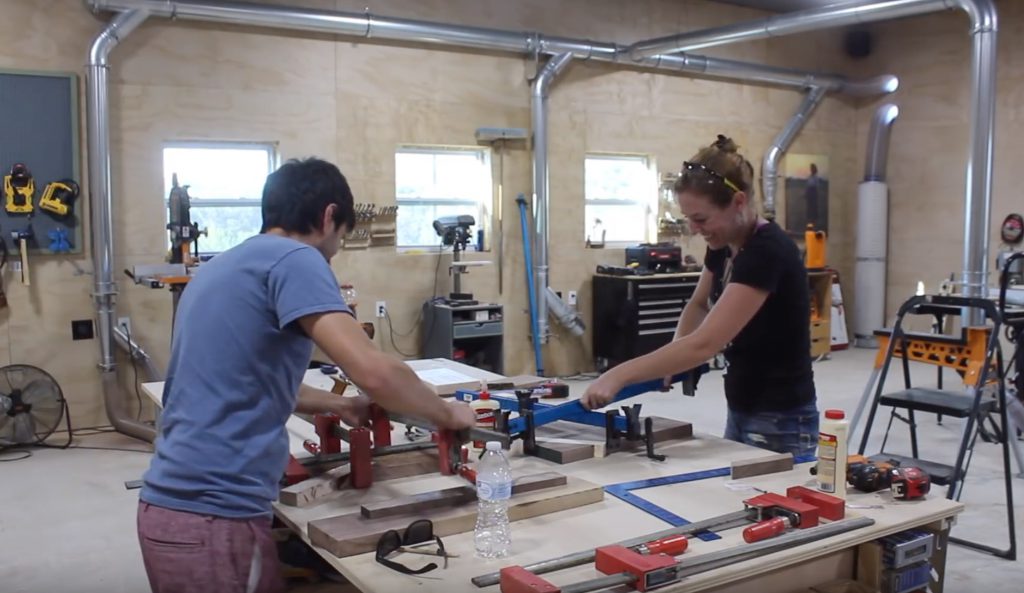 After letting that set for an hour or so, we unclamped our pieces and started cleaning up the edges for round two. On mine, I just cut the left side flush so I could add another board Maple to the edge. Then Matt cut his slides flush to add more walnut and curley maple to both sides. 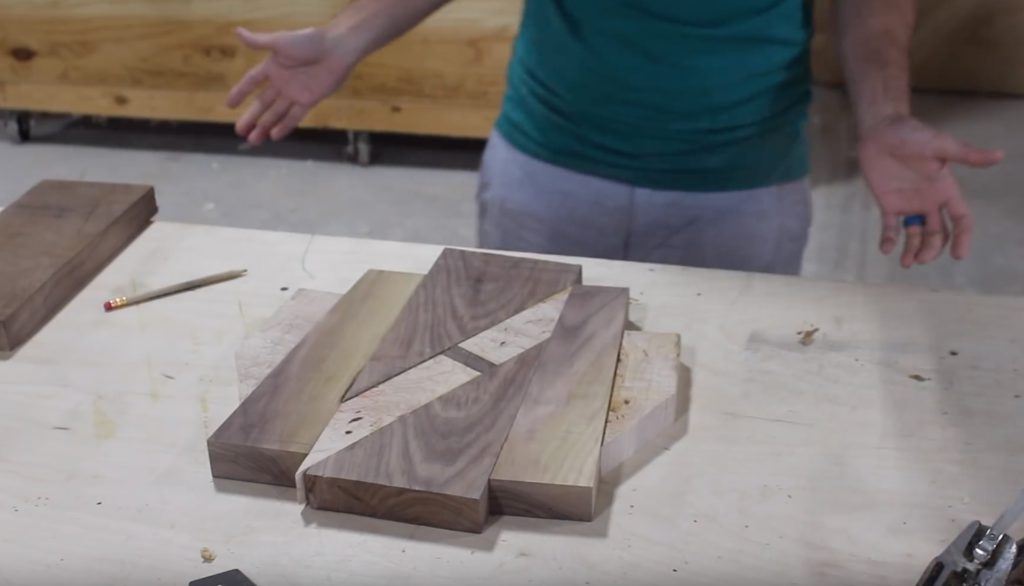 After letting round two glue ups dry, Matt attached the adjustable circle cutting router base to the router, then we turned these funky little creations into circles. You can see we placed a spoil board below the seat just to protect my new workbench top, then used carpet tape which is a strong double sided tape, to hold down the seat. Matt’s glue up was a tad bit smaller than mine so he went with a smaller diameter for his seat. We used a spiral upcut bit made by Infinity to make this cut, and since it’s pretty thick we took three passes to cut all the way though. 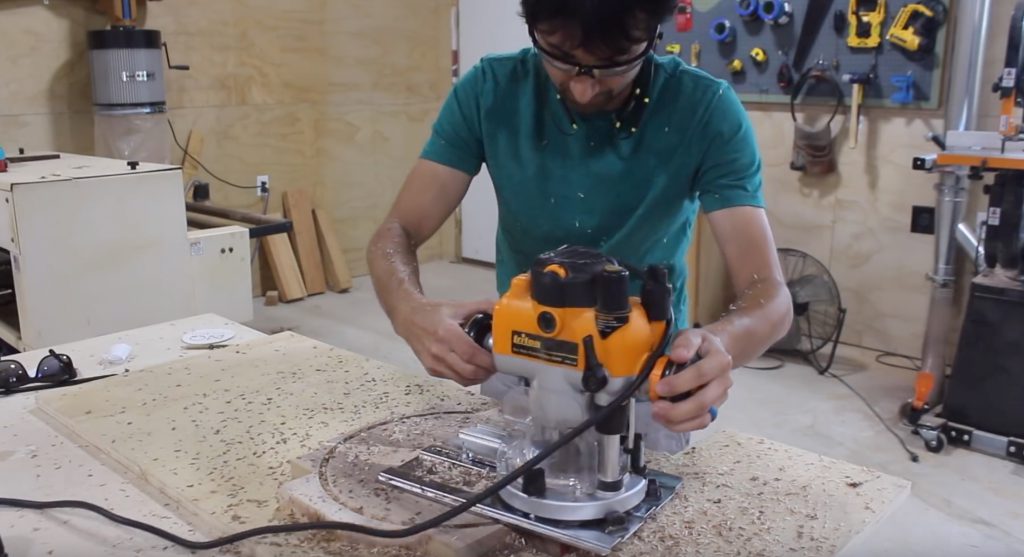 One tip to remember if you do this project is to attach your seat upside down, so that what will end up being the top of the seat is facing the workbench. This will make the screw hole from attaching the router in the bottom where it will be unseen instead of the top.

With that done, next we moved the seats and the SuperJaws outside because next step was to dish out the seat some. For this we were using my power carvers with the sanding attachment on them. To give a visual reference to follow, we used a compass to pencil on an offset line then just started sanding away material. 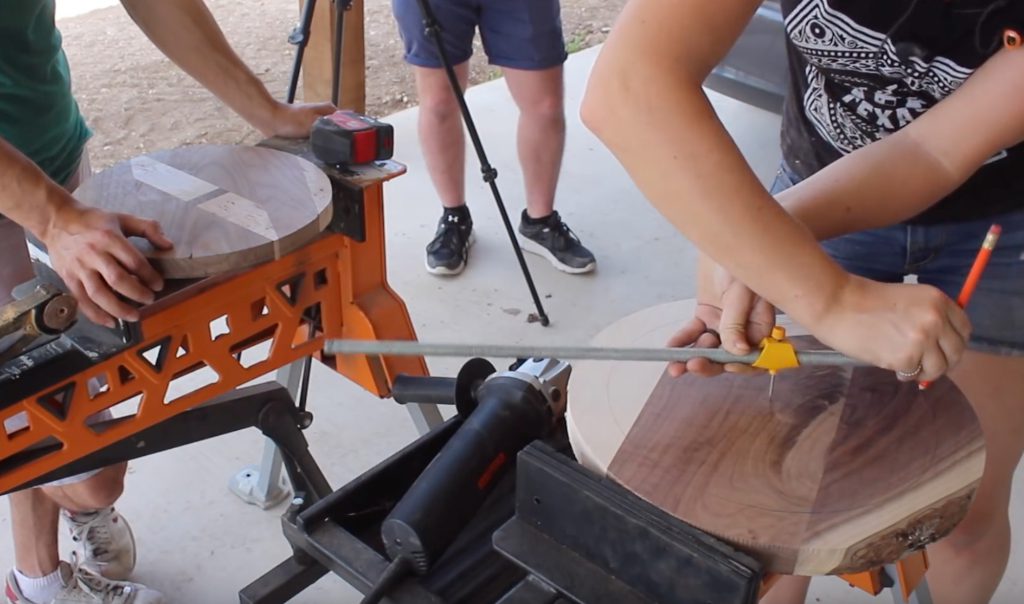 And I’m curious on what other methods there are for dishing out seats that might be quicker. Although this process wasn’t too bad. Matt only took about 15 mins to get his dished, then enjoyed the nice Texas weather while I took a little bit longer to complete mine.

Anyways, back to the project…..next we cleaned up the dish and also the edges with the palm ros sander. Or well, I used the sander, Matt used the spokeshave. Which I think proves power tools and hand tools can be friends. Just sayin…. 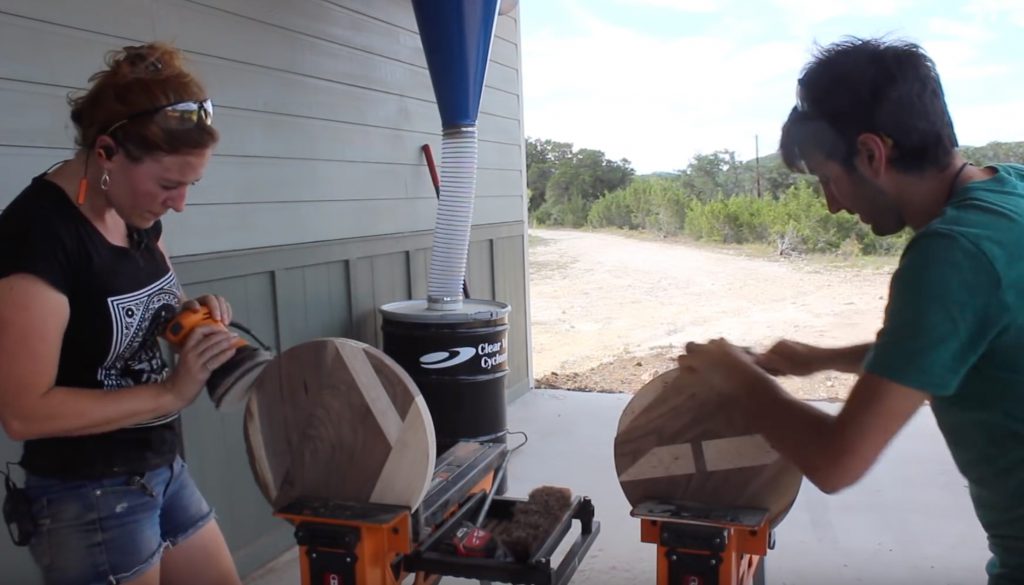 Before applying finished, we took our seats over to the router table and used a 1/2” round over bit to round off the top edge. This not only looks a little nicer but will also make it feel nicer on the back of the legs when actually using the seat. Then something I did on mine is I placed a small chamfer on the bottom edge of the seat. 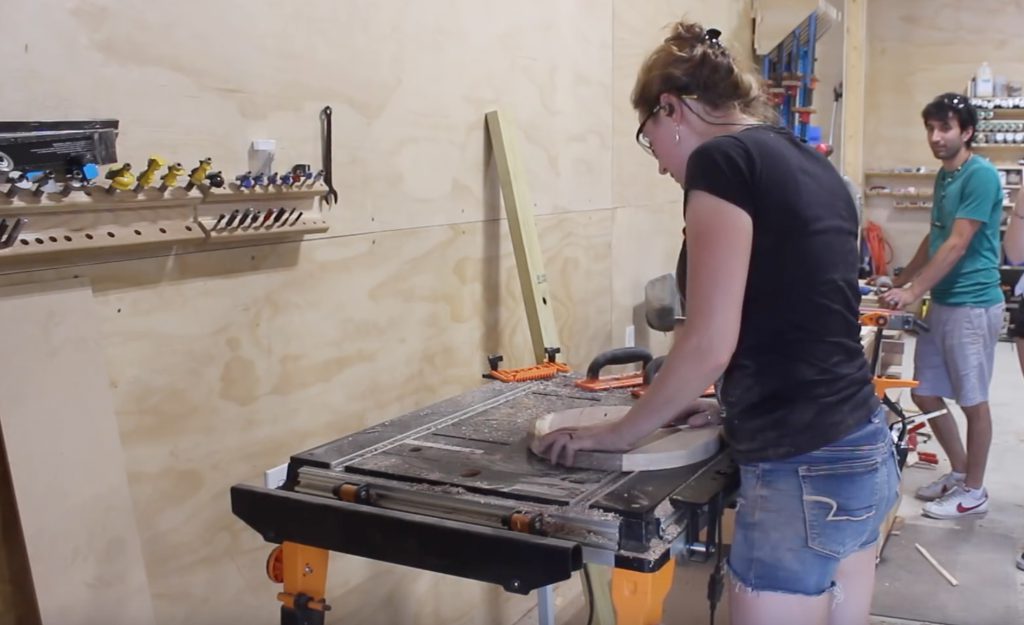 After he signed the bottom, he applied two coats of Danish oil. And my goodness that’s pretty. 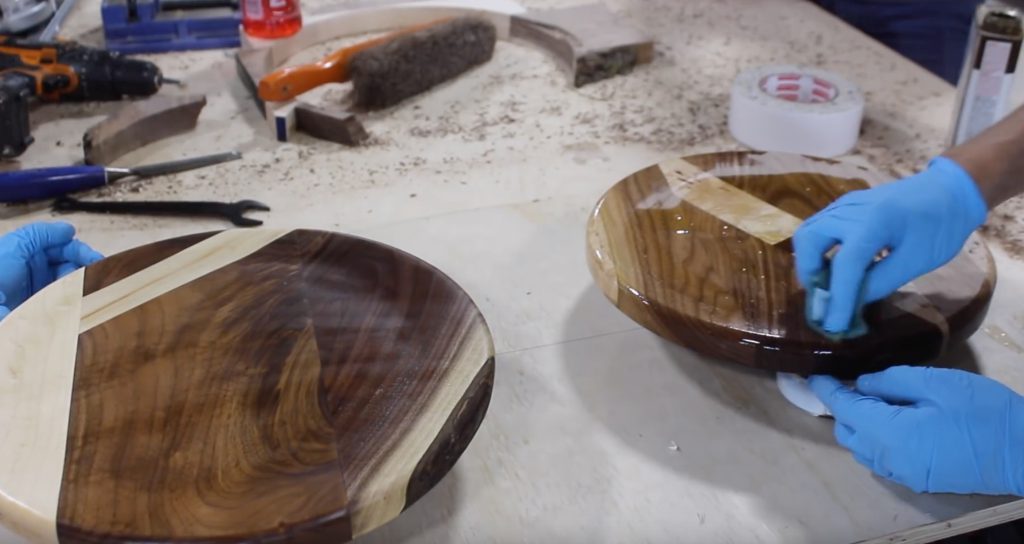 Matt and I actually made these back in August and two seats is just not enough for my shop. So I decided to make some more, but I loved the concept of including scraps from friends and having a piece of them in the shop. So for the past few months, if I knew I would be seeing a friend, I would tell them to toss a scrap into their luggage for me and I’ve come away with quite the haul. I ended up with enough to make at least six more stools so that’s what I did. 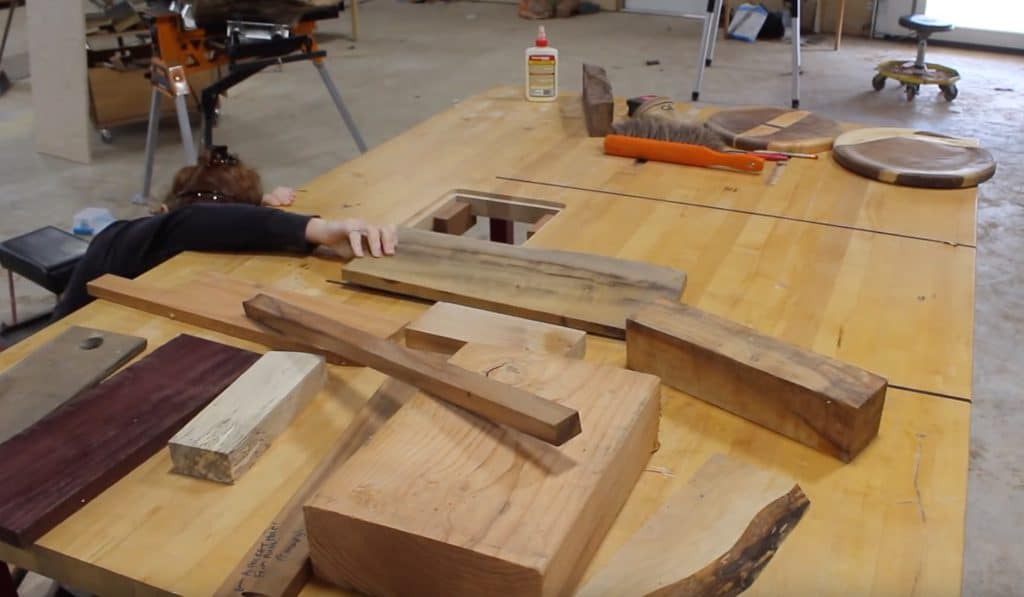 I mixed and match the pieces to get a modge podge sort of look, but I also tried to maintain good aestics with color coordinating. One thing I didn’t pay any mind to is grain direction. Wood of course expands and contracts so typically you want to keep the grain all going the same way so it moves together and doesn’t bust apart, but these pieces are so small I don’t think it will create an issue. But hey, we’ll see. The two Matt and I made this summer are still looking perfect if that’s any indication. 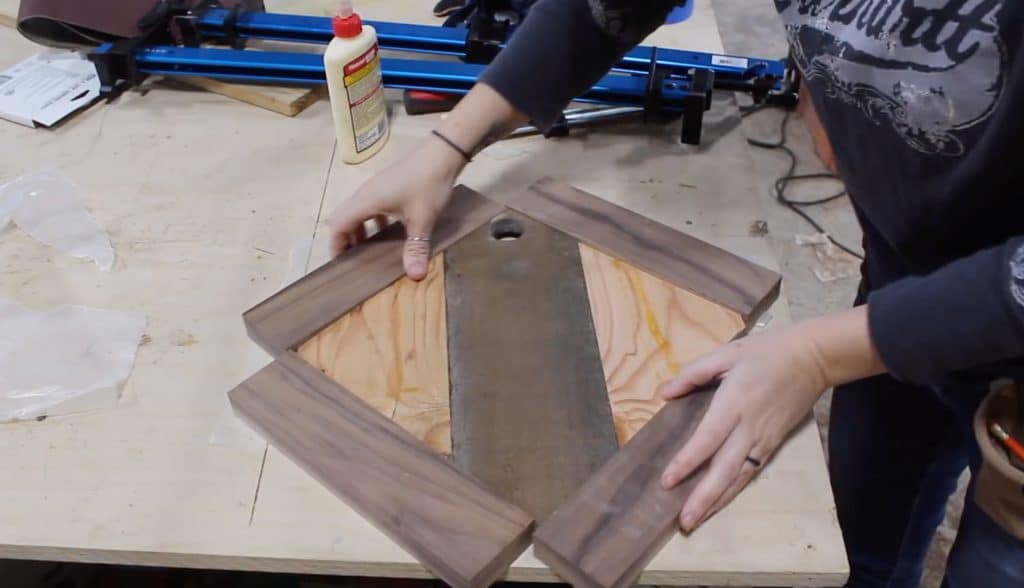 Something I made this go round to help with visualizing is a cardboard cutout. I used 14” as a template then could place this ring over my working piece to see if I liked the direction it was going or where on the board I wanted the circle placed. 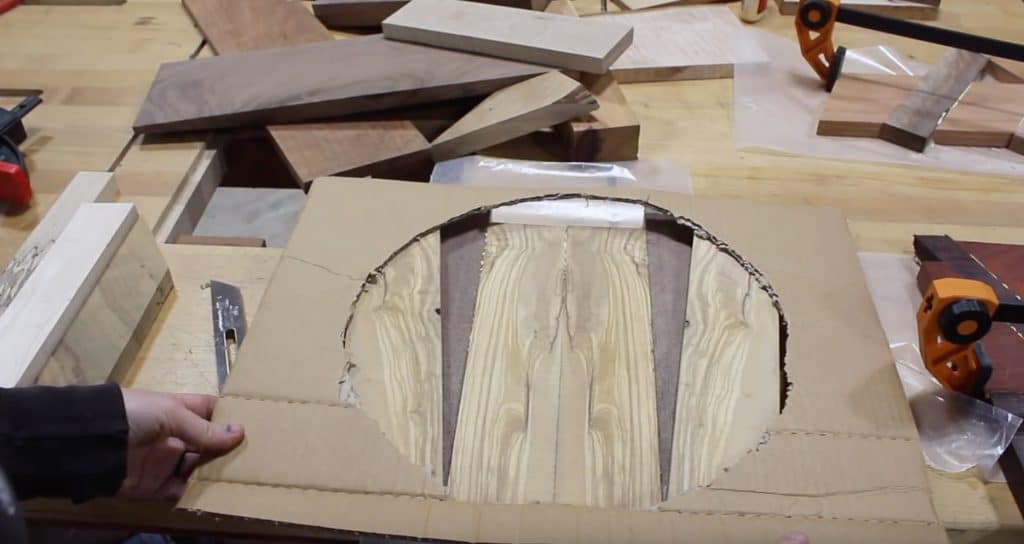 You can see that I placed a small sheet of wax paper under each one of my glue ups, this is just to keep me from gluing it down to my workbench. : )  Each seat had at least two glue ups, if not three but since I was building so many I was easily able to keep busy making another while things were drying.

Of course this is a really great project to use up some smaller scraps but I think this would be a really fun group project. Call up some woodworker friends, everybody bring one or two pieces of wood and gather in somebody’s shop (whoever has the most clamps) then spend the day building a seat for your space while enjoying friends company then everybody gets to leave with a momento that’s useable.

It’s really cool to look them all at the end and see just how varied each one can be. It’s also funny to see what they look like after all the glue ups….at this point I was thinking “hmmmm, these are funky to say the least”. But I will tell you that after cutting them down into a circle, they look muuuuuch better. 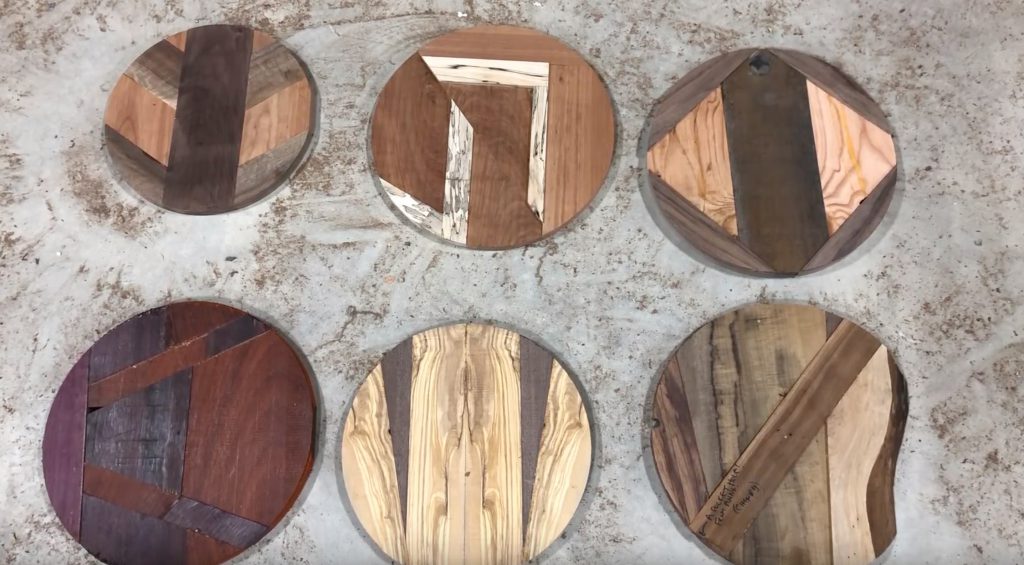 Now since I had so many, I used double sided tape to temporarily secure all of them down to my workbench and this made going over each one with my sander a little bit quicker rather than placing them one by one into my SuperJaws. 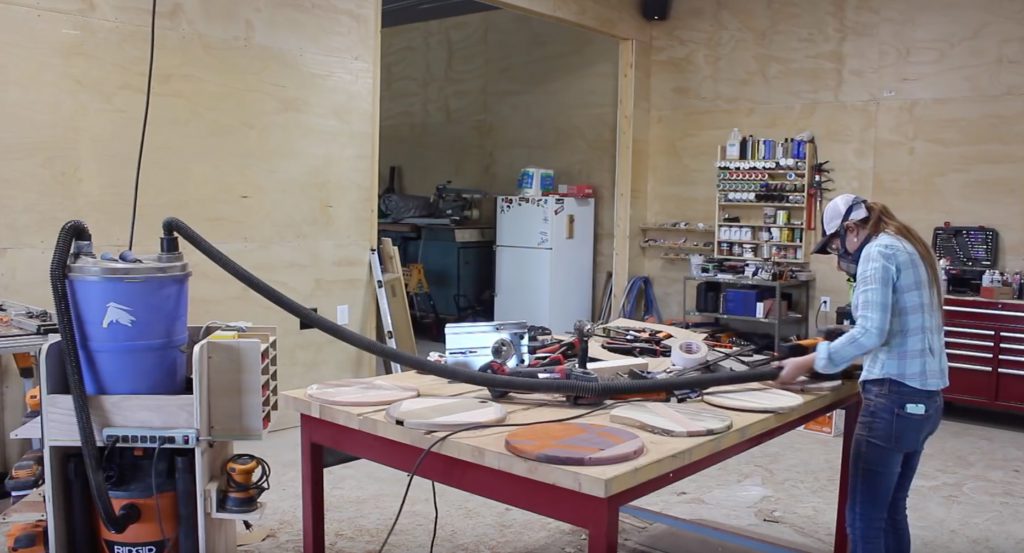 Next up, will be making some bases to go with these tops. I have a pretty fun idea I can’t wait to try out, so stay tuned for my next video to see them complete. Big thank you to my friends and viewers who contributed a scrap for these seats.

(Most of the product links listed above are affiliate links. As an Amazon Associate I earn from qualifying purchases. Thanks!) 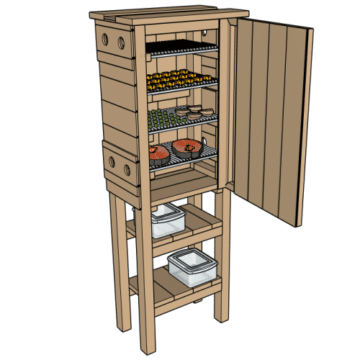