Alright so this is the third and last part of my bathroom vanity build.

If you missed part one and two of this build, you can check those out here: Part 1 and Part 2

Last time I was able to get this far: 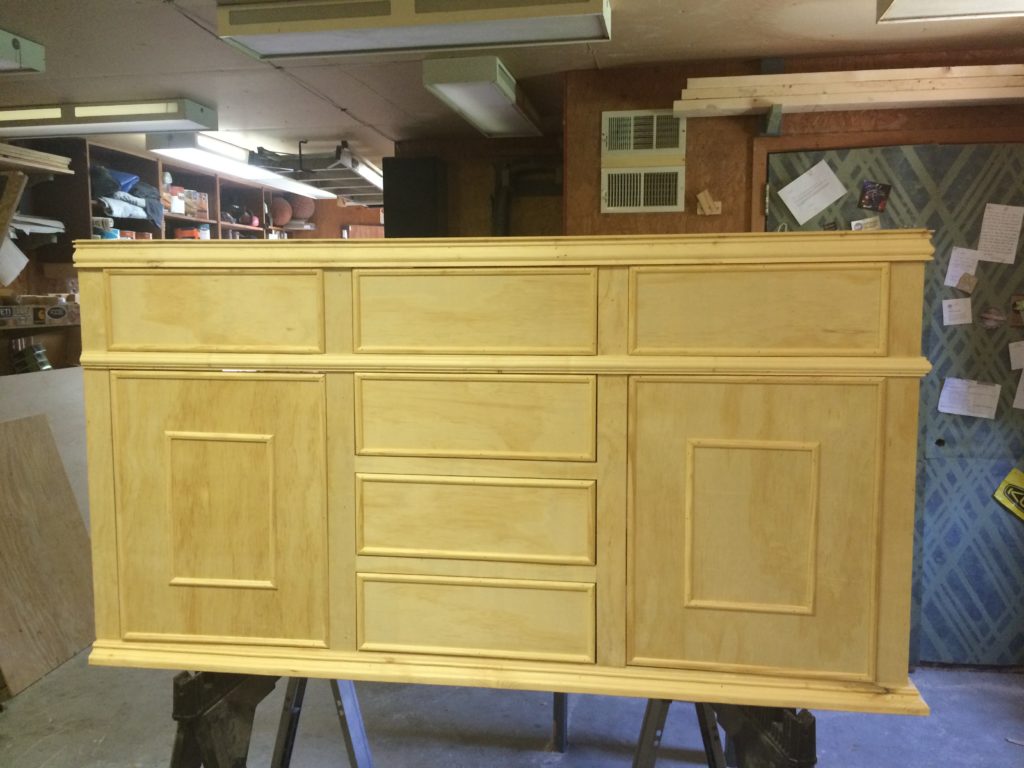 This time I’m going to be adding the feet, applying the finish, and building the countertop! Here we go.

The first thing I took care of was the door problem I was having in the last post. The door wasn’t stopping at 90 degrees, but instead was going inside the cabinet. After getting many (many many) comments explaining that the door needed a door stop, I added one. : )

I picked up these door stops at Rockler which are made by FastCap. I first made a block that came out flush to the face frame and attached a stop with a screw that came with it. Then I screwed the block assembly to the cabinet. These stops rotate so you can get the door exactly flush, so I rotated it around until I was happy with the position of the door then tighten the screw down. Testing it out, the door now shuts at a 90 but the bottom wasn’t supported so I went ahead and added a second stop to the bottom of the door. This way if the door gets kicked it won’t put stress on the hinge.

To make the feet I purchased a 1x pine board with no knots in it. I first ripped it down then used my miter saw to cut it into pieces. I cut 12 pieces to make up the four feet. I glued three pieces together four times and left them in a clamp until they dried. Tip: use some salt in your glue up to keep the boards from sliding around. After the blocks were dried I used a template I made to trace the shape of the feet onto two sides. Once they were all marked I took them to the bandsaw to be cut out. I also used a belt sander to refine the shape some and smooth out the sides.

I wanted to add two back braces for support and also to give myself a way to attach the cabinet to the wall when I install it. Earlier in the build I actually made the two center walls short so that these will sit on the inside the cabinet walls.

I cut two boards to length and drilled a few pocket holes in each end. However I didn’t install them yet because I didn’t want to cut off my good access to the inside of the cabinet yet, since I’ll be staining it next. So for the mean time, I just set them aside.

To prep the unit for a stain I first went through and applied wood filler in all the nail holes. Once it was dry I came back with sandpaper to smooth it out. Since I didn’t want to stain the inside of the drawers, I taped off all the drawer faces. Note: In the video I left the drawers and doors on the unit as I stained, but I ended up removing them. So I would recommend just taking everything out before starting to stain.

Next I applied two coats of Gel Stain in the color Java. I used a combination of a bristle brush and a foam brush to apply the stain to the different surfaces. Let the stain dry at least 6 hours between coats.

I purchased a sheet of 3/4″ construction grade plywood that had been sanded on one side.

I used my track saw to first cut the counter to size. I also used the track saw to cut some additional strips that I  glued and nailed to the perimeter of the counter so that it will look thicker then it is. I went ahead and attached a piece to the inside as well, where it rests on the inside walls, so that the counter would be supported in the center. Note: Before glueing and nailing these down, I did test that the sinks had enough room to sit. I laid the sinks in place ( I centered them with the faux faces and door openings below them), then traced around them. Once that line was drawn I came back with a tape measure and measured in 3/4″ on several spots of the circle so that I could hand connect them.

This was a pain, but my sinks didn’t come with templates. To cut it out I first used a drill to make a hole then used a jigsaw to start cutting. I made the fit cut then set the sink in place to test the fit. It didn’t work perfectly the first time, so I looked underneath to see where it was catching then I would cut a little more and test the sink again. I did this until the sink sat flush on all sides. The hardware my mom picked out doesn’t attach to the sinks like most, but instead are separate. So I had to drill holes for them as well. I used a paddle bit to make the hole for the spout and my jigsaw for the handle holes.

I took a roll of laminate my folks purchased and laid it out on the counter top. I positioned it so that I had 2″ hanging over on two sides (the back and the left), then I clamped it down.

The reason for this is because I need to cut out a piece that I will later use to attach to the top surface of the counter. However, I don’t want to cut it perfect yet because it will just make it harder on myself to attach it. When working with laminate and contact cement, it isn’t like other forms of adhesive where you can apply it then shift the thing around until it’s positioned perfectly. Once you stick it, it’s stuck! So leave yourself some extra material. By leaving 2″ on two side, this will give you 1″ of wiggle room on each side when it comes time to apply it.

I came through with my flush trim bit in a router and trim the right side and the front flush. To make all the strips to apply to the edges I would clamp the laminate in place so that the needed amount of laminate would be hanging over. For example: the backsplash is 5″ so I clamped the material down so that 6″ was hanging over the counter, then I used the router again to make the cut. Note: Remember to compensate for the material of the router bit and also give yourself some wiggle room for applying. To apply the laminate you start with the edges. I would first use a brush and apply the contact cement to the wood first then the piece of laminate. Set it aside and let it dry until it’s dry to the touch on both pieces. Once it is start on one side and slowly apply the laminate. After it’s attached use a roller of some sort to apply good pressure, I used a tile roller. I went through and applied all the edges first, even on the backsplash pieces. Then I used the flush trim bit to cut everything flush. I repeated the steps to do the surfaces of the pieces as well. For the counter, since it’s so large, I first laid down some dowel rods and PVC I had so I could position the laminate before it was stuck. I set the piece on top of the rods then checked to make sure I had material hanging over on all sides. I started on one side of the laminate then as I applied it I would remove the rods. Now to use the flush trim bit once again to make it perfectly flush.

To install the hardware I first needed to reveal these holes so I flipped the counter over and used a drill to drill through. This way when I flipped it back over, I could now stick my router in the holes then the flush trim bit would cut the laminate to the size needed. I did this for the hardware holes as well as the sink hole.

To attach the backsplash I set it in place, predrilled a few holes, then came back with screws. Next I made a bead of silicone along all the seams to seal the cabinet. This is incase water gets on it, it won’t have a way to fall through and get inside.

I set the counter top in place but I’m not actually going to attach it to the cabinet until I’m installing it at my parents house. I just don’t want to take a chance on something breaking when I’m hauling it to them. So the next time I visit I will record the process on how I attach the sinks, hardware, and install it into place. : )

It was really difficult to get a good photo of this cabinet since the body is so dark and the top is so light. You throw in the fact that I’m awful at taking nice photos anyways, and it’s easy to say that photos really don’t do justice on how nice this looks in person. I know the body looks really dark, but it looks fine in person. If you liked this project and want to stay up to date with what I’m building, then be sure to sign up for my email newsletter and you’ll get an email when I post something new. See you soon! 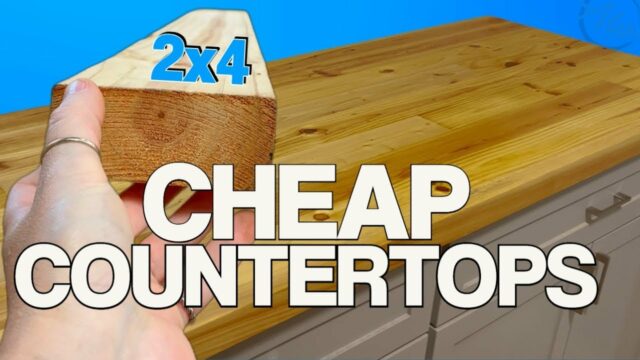 Cheap Countertop Made from Scrap 2×4’s 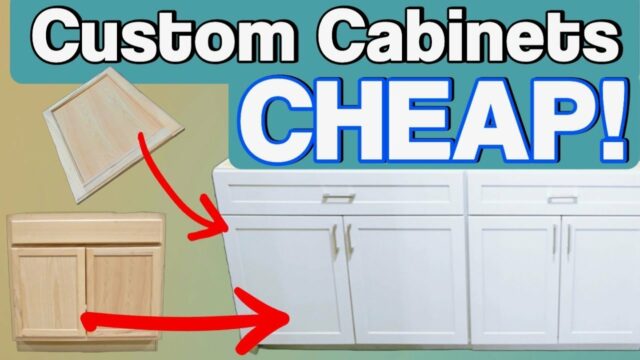 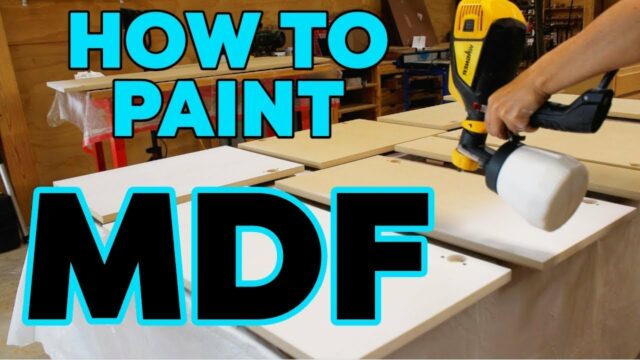 Painting Cabinets | Get a Smooth Finish on MDF