With it coming up on the holidays, things are winding down for me in the shop. I’ll be taking off a little bit of time to regroup from my extremely busy year and spend time with family…..It occurred to me earlier today that I built a 4,000 sqft shop this year, which is just incredable. It seems like it was so long ago. 2018 has been outstanding and I hope you’ve enjoyed coming along with me this year as I tackled a large assortment of projects. I wish you all a very Merry Christmas and a Happy New Year. But one last video for the year. As I was looking through footage I realized I installed fans earlier this summer in the shop but never released the video covering the process. So lets jump into it.

I installed two different kinds, inside the shop I installed a giant Big Ass Fan in the center of my woodworking space and four smaller Hakui fans on the covered porch. 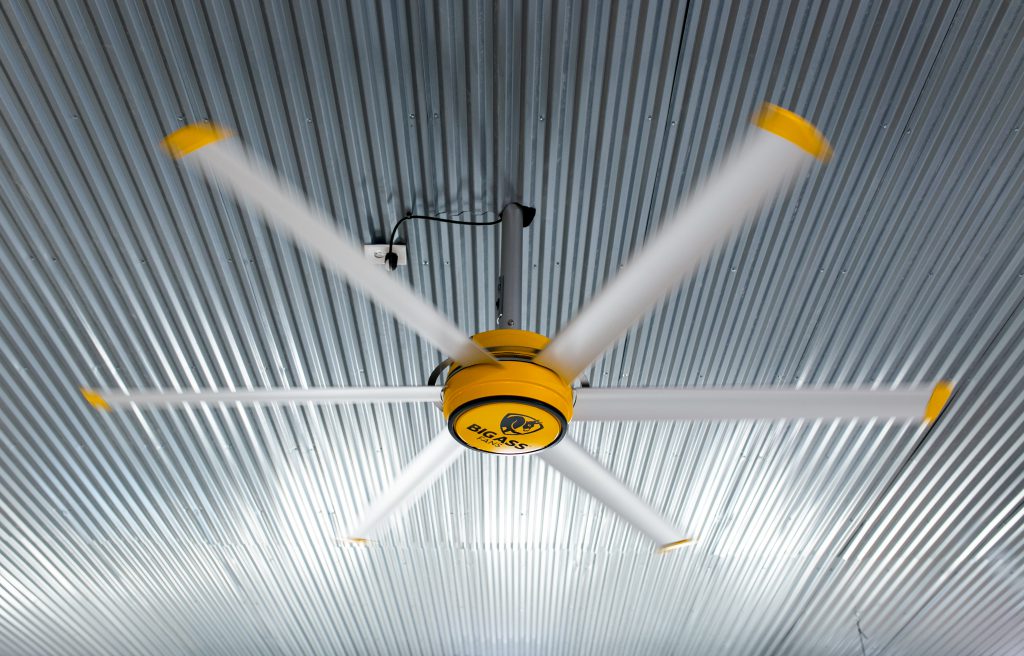 If you aren’t familiar with the Big Ass Fan brand, they make crazy efficient and stunning looking equipment. If you watched the shop build you’ll remember that I installed their lights. Since I wanted to place this 7’ diameter fan in the center of my woodworking space, I first started by taking out the light that marked center of my ceiling then also removing a few ceiling panels where the fan would need to go.

This size of fan requires a mount to be fabricated that will span across the bottom cord of two trusses which is why I’m having to take down the ceiling panels to expose the bones. If you don’t want or require such a large fan there are models that will allow you to attach the fan to one truss which would mean you wouldn’t have to expose the trusses.

I fabricated my mount from two pieces of angle iron backed up to one another. I first cut them to the length needed to span two trusses then joined them together by drilling a hole dead center for a nut and bolt, using my Triton Super Jaws and a pair of vise grips to hold them in place for me. I repeated the steps in order to make two brackets at the same time.

After getting those punched I moved the pieces down to the ground, separated them, and drilled two holes on the flat portion that will be sitting on the truss.

With those together now I grabbed the hardware that will attach to these mounts in order to hang the fan from. I positioned it in center and marked the location of the holes that needed to be drilled out. When punching through metal I always work up to the final size hole if it’s somewhat large. So for these I start off with punching a 1/4” hole, then step up to the final 1/2” size which is the bolt I’m using.

Once I got those tighter I ran the wiring through the center tube for the electrical bits then dropped that down in the center of the mount. Now it was ready to set into place. To keep it from moving I temporarily clamped it in place while I crawled up top and attached it with lags to the bottom cord of the trusses.

Something I really love about this fan is the wall mounted remote, it’s more of a speed indicator as it not only turns the fan off and on but also dictates how fast or slow it spins.

I didn’t want to run the wiring on the outside of my ceiling material so that meant I had to crawl up into the attic….let me remind you this during the heat of summer!….and get into the tiny tiny point on the far side of the roof in order to feed down the wire to Brian. My recommendation is if you are building a shop, even if you don’t install fans at the start, leave yourself a wire from where you’ll eventually want the controller to the placement of the fan. Just coil it up and leave it in the attic so you don’t have to do all this crawling around.

Alright, next up was mounting the motor into place, which might take two people because it’s pretty heavy.

Next up was mounting the airfoils. These do come in different diameters but mine are 3’ long, which including the center hub span, makes this fan 7’ total. And let me tell you….it’s crazy how much air this fan can move, and also how still and quiet it is. Even when I crank it up all the way you don’t hear any sounds from it other than the air itself moving.

And that’s it for the installation part of the big fan, so next was throwing back up the ceiling panels that were taken down earlier. To get around the fan’s stem I used a rotary tool to make a cut around it.

While I was mounting fans, next I moved to the porch. I love working on my covered shop porch when the weather is nice enough so having the option to get some moving air out there was a must for me. For this area I’m going with a smaller Big Ass Fan called Haniku. These fans have over 1000 options for finishing combinations but I went with Carmel and Black to match the cedar beams I have on the porch.

These fans are ultra quick to assemble. It was honestly as simple as attaching the fan blades, attaching the center tube with the wiring in it, then adding both hubs that keeps the top and bottom ends of the tube looking nice once it’s mounted.

Haiku has won more than 75 international design and technology awards and one thing they strive for and hit, is ensuring their fans don’t wobble. I found out they have a 13 step process to hand balance each fan so you won’t have to be distracted by the repeated off balance rhythm so many fans make.

After I mounted the bracket on the ceiling where I wanted the fan, I placed the ball into the socket, that’s what I’m describing it as at least, and turned it on. These fans also come with a remote and allow you to control the speed. Ha we were laughing because there is an actual “whoosh” button : )

Also, big high five on not only the quality of the fans, but also the instructions, and even making the remote magnetic. Just from head to toe, from aesthetics to function, everything on these products screens thought, effort, and quality.

If you’re looking at mounting fans in the shop or even in your house I can’t recommend these enough. They are highly efficient, exceeding the Energy Star requirements for ceiling fans, extremely quiet, and have a customizable look for every space.

And while you’re checking things out, check out April Wilkerson merch here.

Ok, that’s it for 2018! Not only was I able to build my shop this year, I was able to put a big dent in my to-do list for outfitting and personalizing it. And that’s a great feeling. Thanks for coming along.