I loooove me some blankets so in my living room. I have plenty of them however, I don’t have any place to store them so they are scattered everywhere. This week I’m fixing that by building a coffee table that has storage inside. I was thinking about building one of those tables where the top actually lifts up and turns into a surface to eat on (while sitting on the couch) but we actually never eat in the living room so I figured I would stick with a more traditional style of having a hinged lid that opens. For the hardware I used special hinges called torsion hinges and even though these are kinda pricy I picked them because they hold their position when opened and won’t allow the lid to slam shut….so saving any fingers from getting smashed. 😉 If you are interested in building a coffee table just like mine then I do have a set of plans where I provide you with a cut list and a material list then walk you though how to build it.

Ok lets get started! For materials I’m using PureBond Plywood, which can be found at Home Depot. It’s made in the USA and is formaldehyde free! I went with oak for the plywood so for the trim I used solid oak to match it. 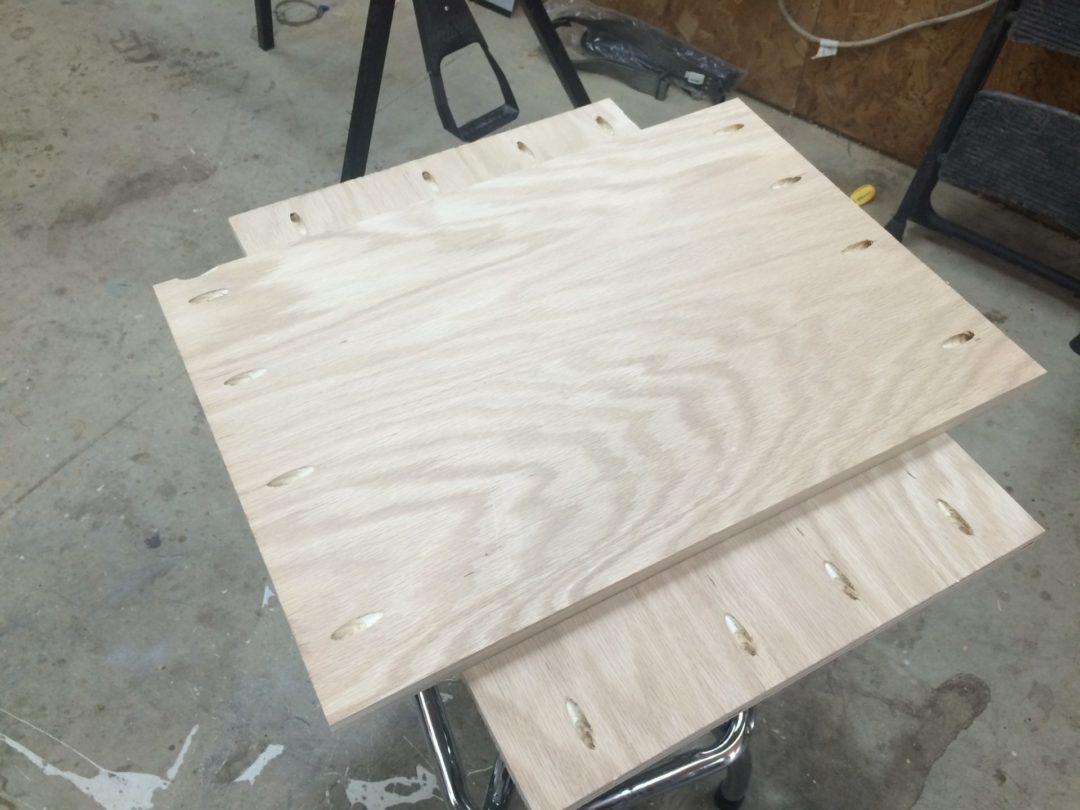 Next I join things together by using glue and screws. Tip: When joining things together with pocket holes the boards have a tendency to move around and not come out flush (and I hate that) so this time I used two right angle fences clamped to my boards and it held the boards in place so that when I drove in the screws, the boards didn’t move. 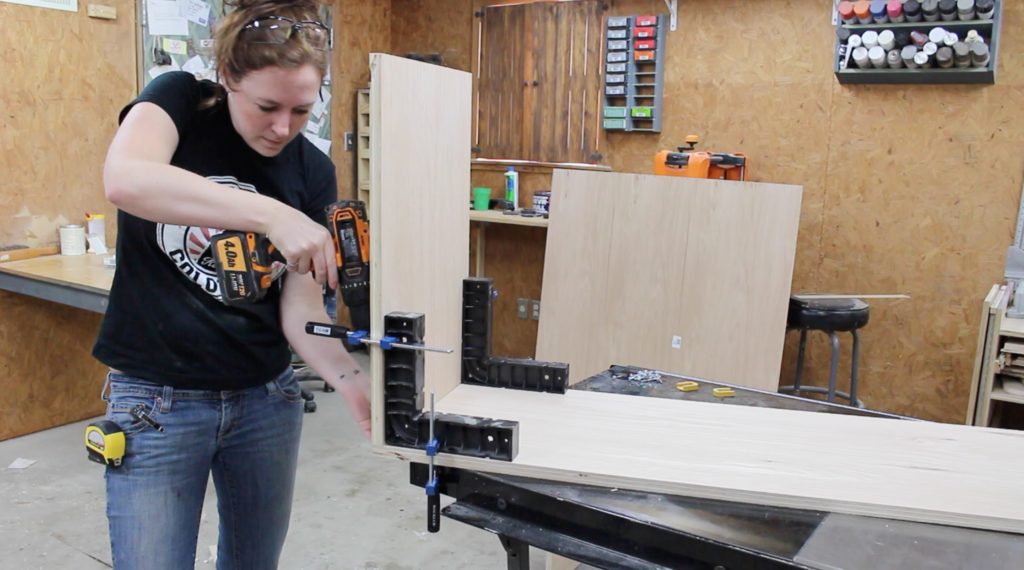 Join the two short sides onto the long sides then flip it around and attach the other long side. 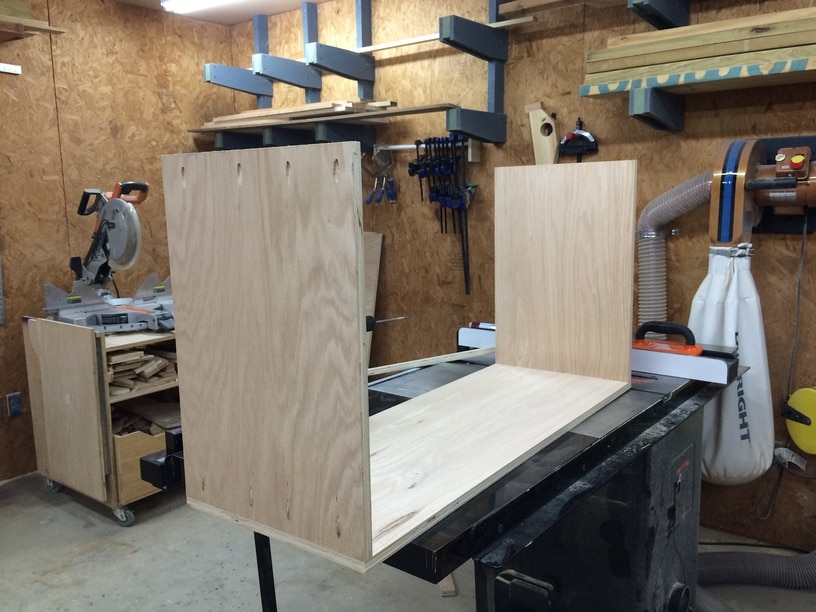 Wilker Don’t: I realized after I put the box together that that top edge is going to be visible when the lid is open, so I ended up adding edge banding to all the top surfaces. This isn’t hard, but it is a little more difficult than if I were to edge band my boards before joining them together. So learn from me and edge band the top edges before joining.

With the box made I cut a bottom for it. I was originally planning on joining the bottom with pocket holes but the problem with that is I didn’t want any holes seen from the inside….I could have placed them on the outside, but I didn’t want to change the design I had in mind for the trim. So instead, I just glued and screwed it on. I did use a countersink bit first so that the screws would be sunk into the material.

With the body done I moved on to adding the trim work. After cutting all my pieces I took the time to edge band all the surfaces that would be seen once they were installed. Note: At this point I didn’t know what trim I would be using for the inside of my compartments so I ended up edge banding a lot more then I really needed. So I would suggest picking out your trim first so you know if it will be wide enough to cover your entire edge and this will let you know what edges need to be banded.

If you aren’t familiar with edge banding, it’s pretty much a cheat on how to make plywood look like real wood. It will cover up the end grain of plywood so it looks like a solid wood board. If you are going to be painting your unit then you don’t need to worry about it, but if you want to stain it then this will make the edgesd take a stain very nicely. You will need to purchase some edge banding veneer to match your choice of plywood. I went with oak plywood so I picked up oak edge banding. You apply the edge banding by ironing it on, the banding has dried glue on the back surface so when you place the iron on it, it will melt the glue and give you a chance to stick it to the edge. I move the iron on the surface for a few seconds then use a scrap board to apply pressure then repeat over the entire length of the banding until done.

I apply all the banding first then come back and trim it up. I use to use a chisel to do this however I finally made it to my local Rockler store and purchased a dedicated trimmer tool and this made the task go by much faster and cleaner. 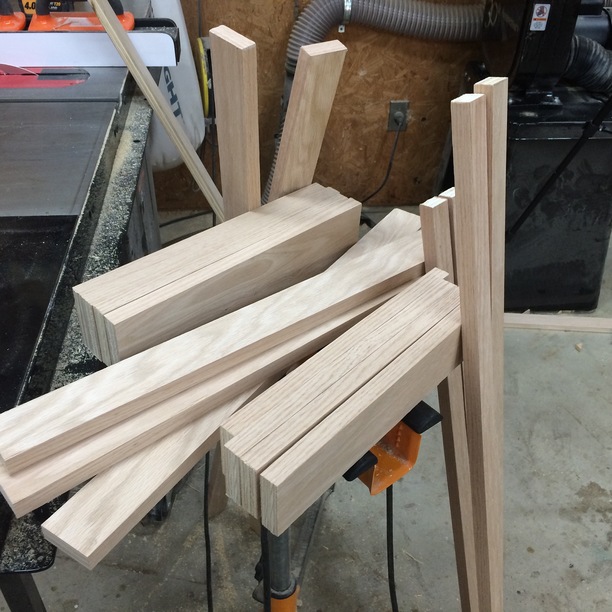 With the trim cut and banded I started attaching it! Keep in mind as you are reading this that if you want to make a coffee table, you can follow these same overall steps but can change up the details to make the table fit your personal space better. Maybe you want it more rustic, or with real drawers, or whatever! At the end of the day, it’s a box and you can very easily change the way it looks by changing up the trim on the outside. 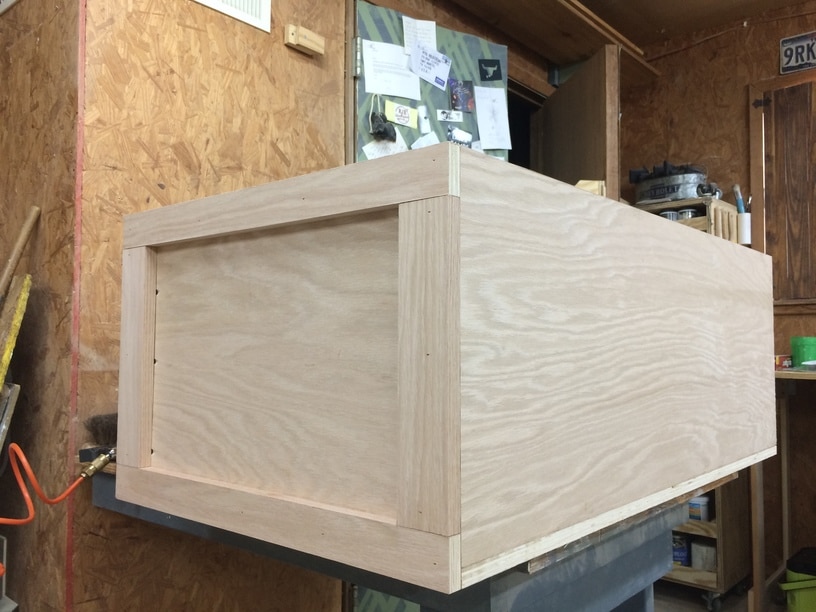 After attaching the trim I went back with wood filler and filled in all my nail holes. 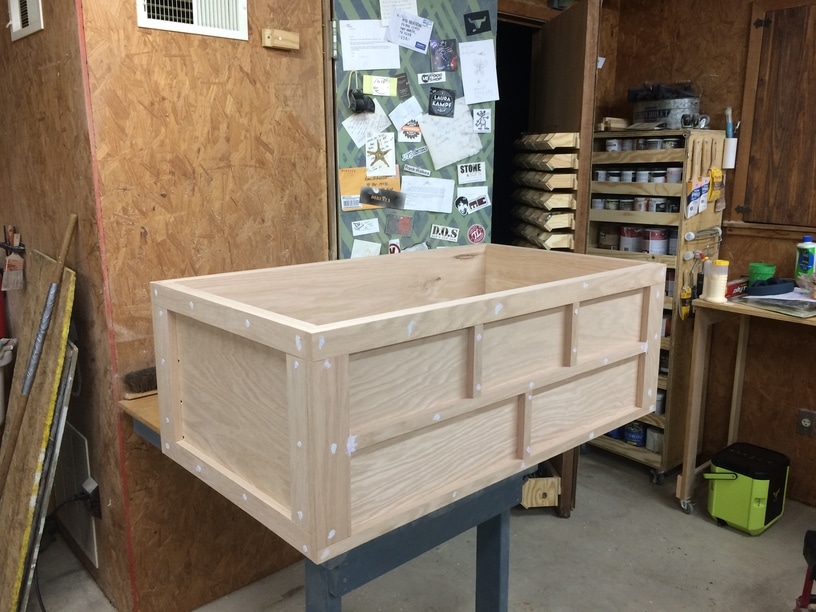 I think if you were to leave it as is right here it would look great! So if you don’t have a router or don’t want to mess with making/adding trim then just skip the next step.

I wanted to add trim to the inside faces of all the compartments I just created and instead of buying trim off the shelf I decided to make my own. I already had a bit from when I built my folks a bathroom vanity and even more, I had some oak boards left over from my last project when I built the pool table light. So I set the bit in my router table and cut several strips of trim from the solid oak boards. 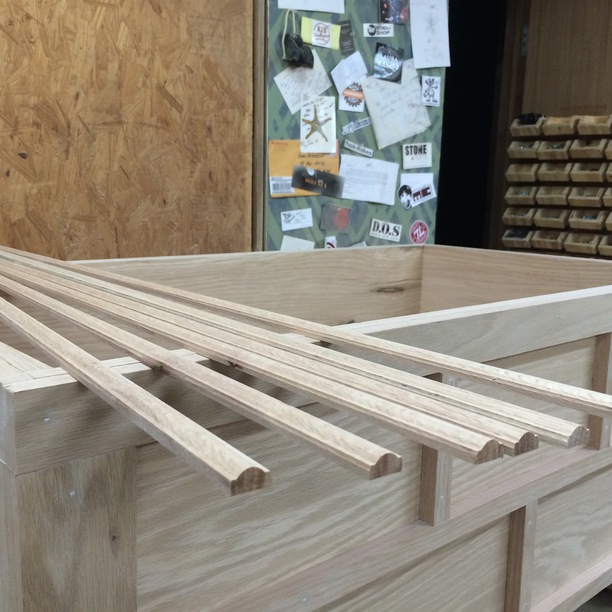 Once I had enough to cover the entire unit I started the task of cutting the miters. I typically do this at the miter saw, but my saw never cuts them perfect and it frustrates me. So this time I used a 45 degree sled I found at Rockler and used my table saw. I was really happy with the results so I’ll probably continue to do this in the future.

Since I needed multiple pieces the same length I clamped a temporary fence to the sled then used a pencil to mark the location of a piece. This way after I cut one I could move another piece into place and cut it to the same length. 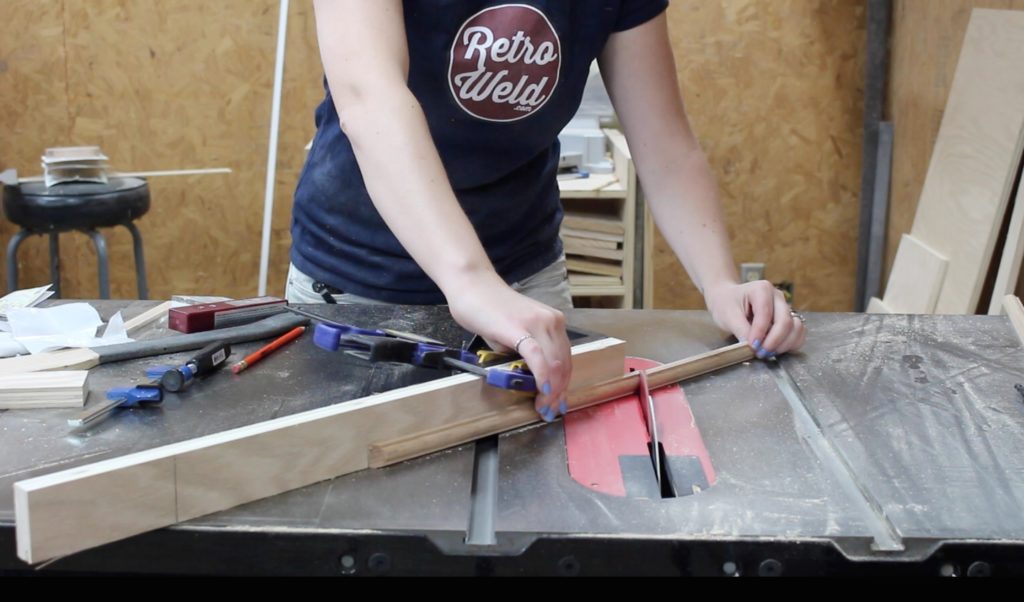 I dry fitted all my pieces before committing. So I went through and cut all my miters and set them in their place then I came back with glue and brad nails to attach everything. Tip: after glueing in these pieces use a damp cloth to wipe off the glue squeeze out. This will make the sanding step go a lot quicker. 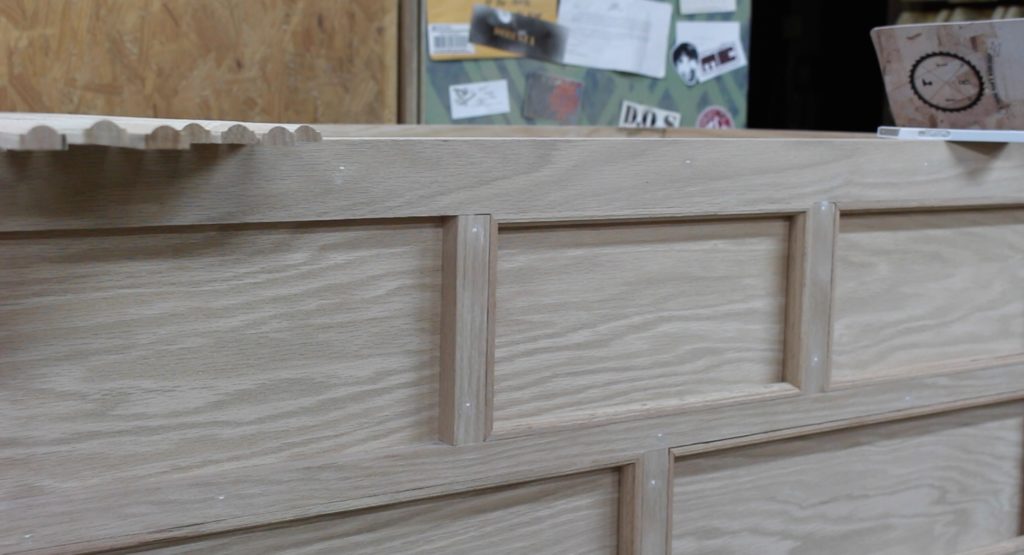 Ok now I moved to attaching the lid which could have been a lot easier if I went with different hardware. However, I specifically went with torsion hinges because they are amazing. They keep their position at the angle you open the lid at, so they don’t slam shut and the lid will stay open until you shut it. They are a bit more pricy but since I plan to have this for a long time it was worth it to me. If you would rather go with hardware that won’t need any mortises then I suggest picking up a piano hinge, because it can be mounted directly to the top edge and onto the lid. If you need a guide, here is a video of Marc showing how to install a piano hinge on a different but similar project (skip to 9:37).

The torsion hinges are designed to fit right on 3/4″ material, but since I added trim my outside edge is now 1 1/2″ thick and the hinge will no longer slip on. To fix this I used my router with a `1/2″ straight bit to make a mortise in the back of the unit for the hinge to fit into. I used the guide fence that came with my router as well as two scraps clamped on the left and right to make this go quick and easy. 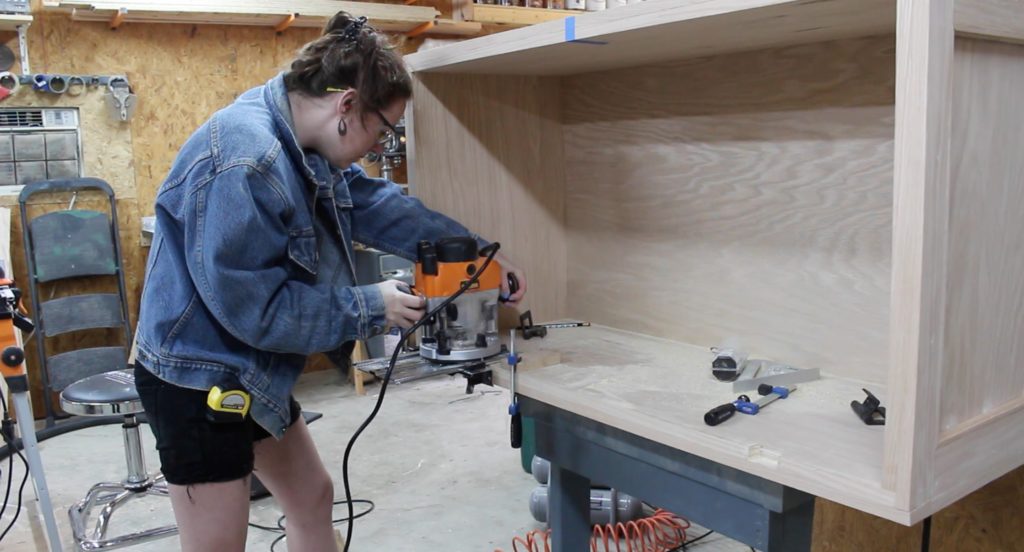 Then I attached the hinges. 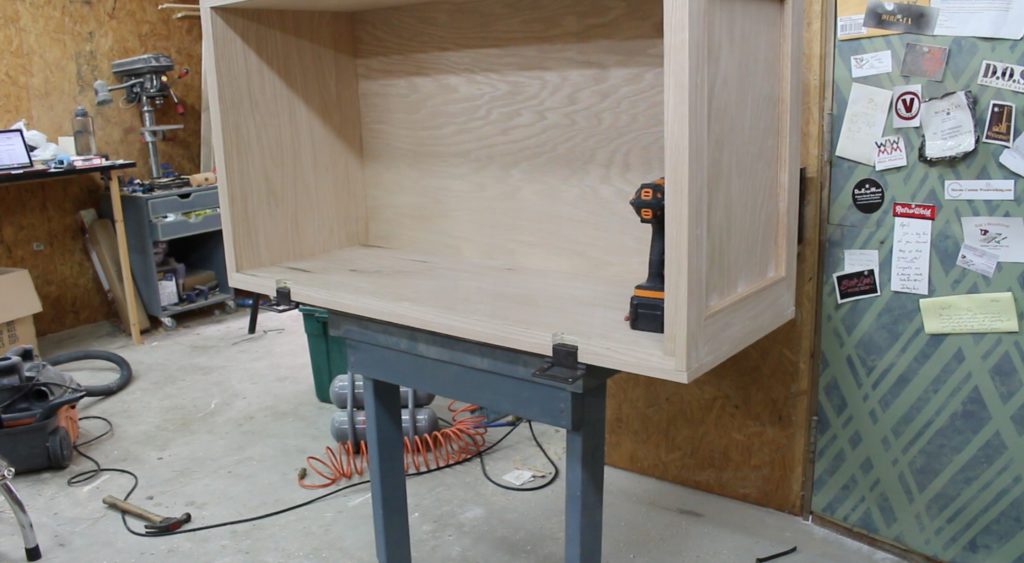 Next I cut a lid and I thought about just attaching the other portion of the hinges to the underside, however this would make the back of the lid stand up taller than the front (just slightly). So since I already had my router out, I cut in another mortise on the lid for the hinge to be nested in. Again I used the guide fence and two scraps clamped to my piece to cut out a nice clean mortise. 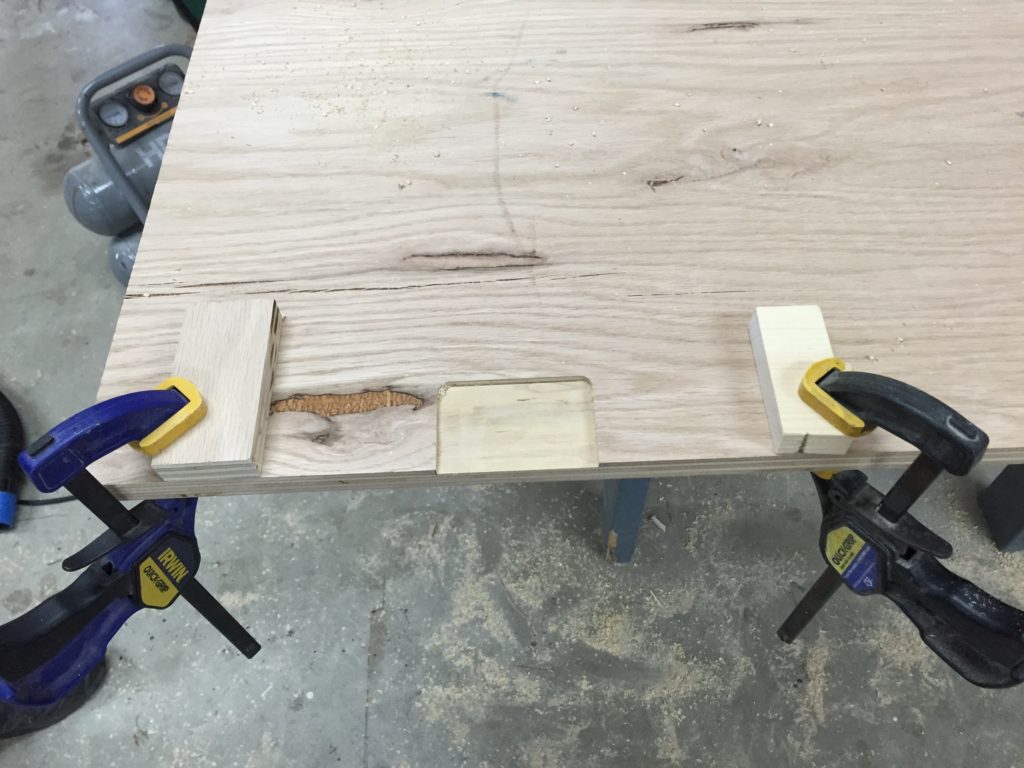 Before attaching the lid I used a jig specially made for the torsion hinges to mark the locations of where the screws would be so I could predrill them. This jig is awesome because it gives you the option to either have your hinges flush with the edge of your lid or under flush so they are a little better hidden. Since I was going to have my lid over hanging a bit, I went with the overlay option. I set the jig in place and used a self centering bit to predrill four holes. 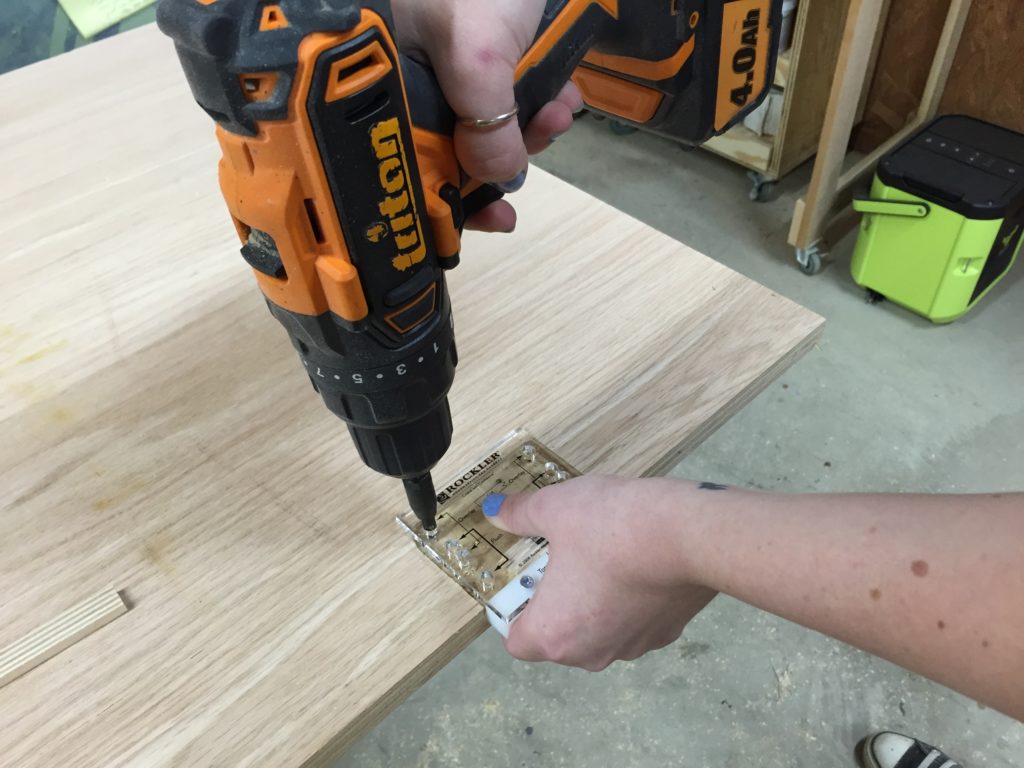 With the holes predrilled this meant I could just line those holes up with the hinge holes then screw it down. This lid is pretty large so I used the help of my multi stand to hold it in place while I attached things. 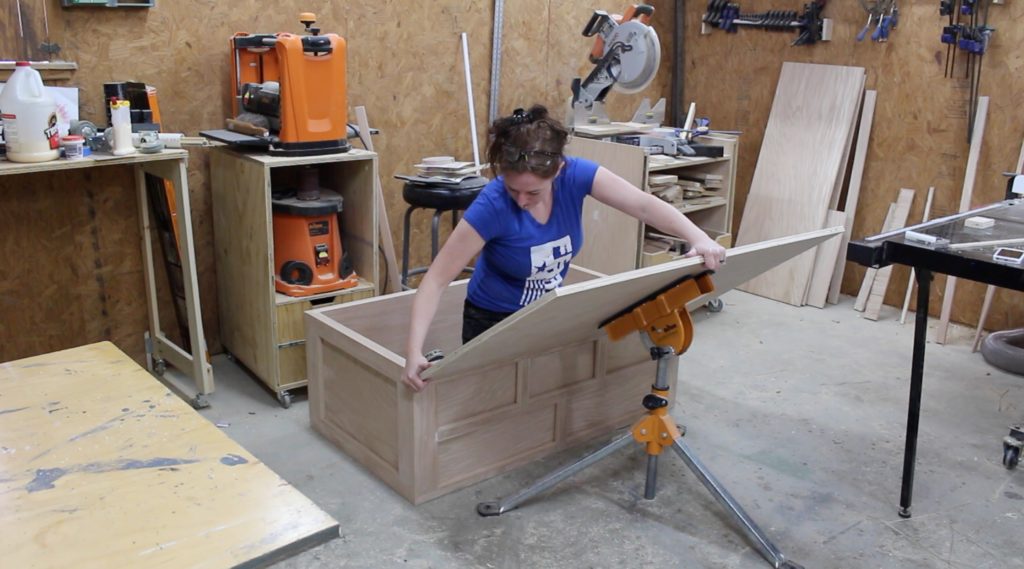 Awesome! Getting close to the end!

For the top I decided to make a few more moulding strips, using the same profile as before, and attach it around the edge. If you don’t want to make your own moulding here, you could simply use edge banding to hid the plywood end. 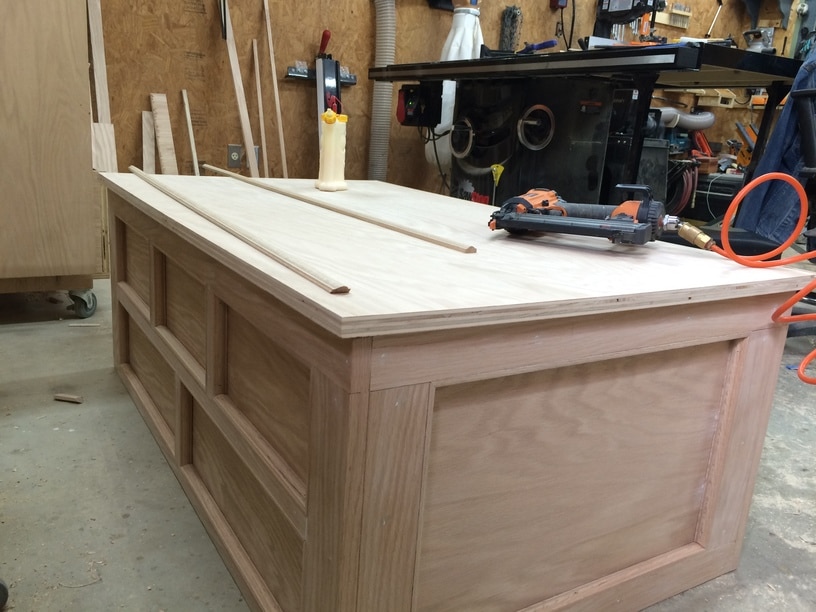 Now that everything is attached it was just a matter of getting it ready for a finish and applying a finish.

I started by using wood filler to fill in all the brad nail holes. Once that was dry I gave the entire chest a sanding then dusted it off really good.

For a finish I tried a new brand called ZAR and I went with their Moorish Teak color. I applied one coat of stain then three coats of water based poly. Then that’s it! I moved it inside and filled it full of blankets. 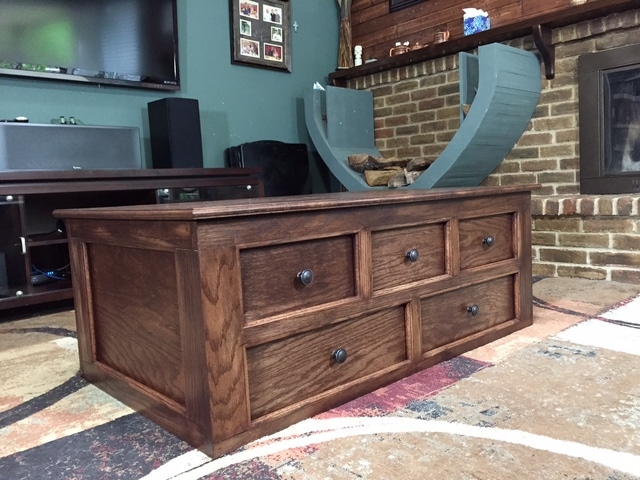 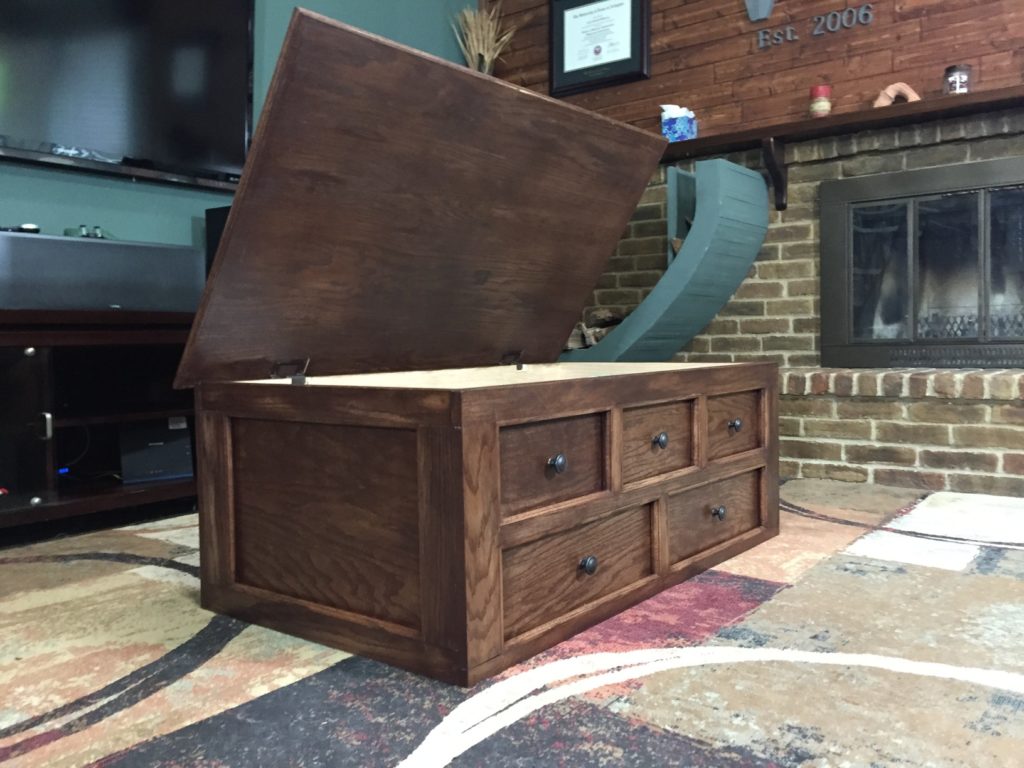 I actually originally planned to add feet to it, but once I got the body and trim finished I loved the way it looked so I left it alone, but keep the option of feet in mind if you are building one! If you would like to build one just like mind, remember I have a set of plans available!

Since I didn’t have to buy any oak boards this project cost me the two sheets of plywood, the stain, hinges, and the knobs which all amounted to $193.