If you caught my last post, then you’ll know I started building a double sink bathroom vanity for my folks. I was able to get as far as this:

so in this post I will be explaining how to install the drawer slides, make the drawers, and also make and install the faux faces and doors.

Installing Part A of the Drawer Slides

To do this I ripped a few boards as wide as the slides, then cut them to length. I would first tack them into place with a single brad nail in the center of the runner. 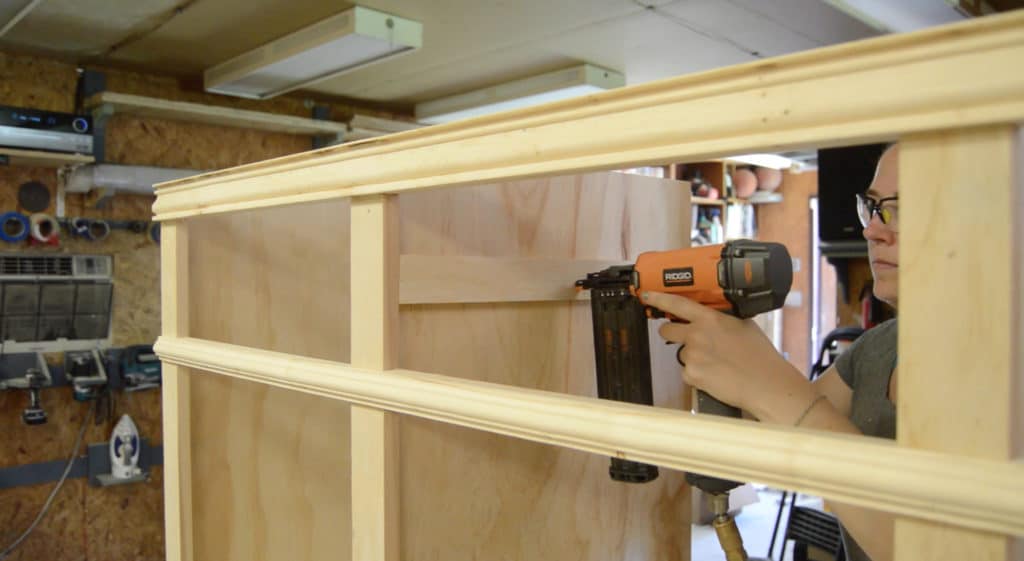 Then I would measure the front and back to make sure the runner was level. Once it was level I put in three screws to attach it permanently. Note: Put in your screws above or below the center line so that they won’t interfere with the screws you’ll be putting in to attach the actual slides. 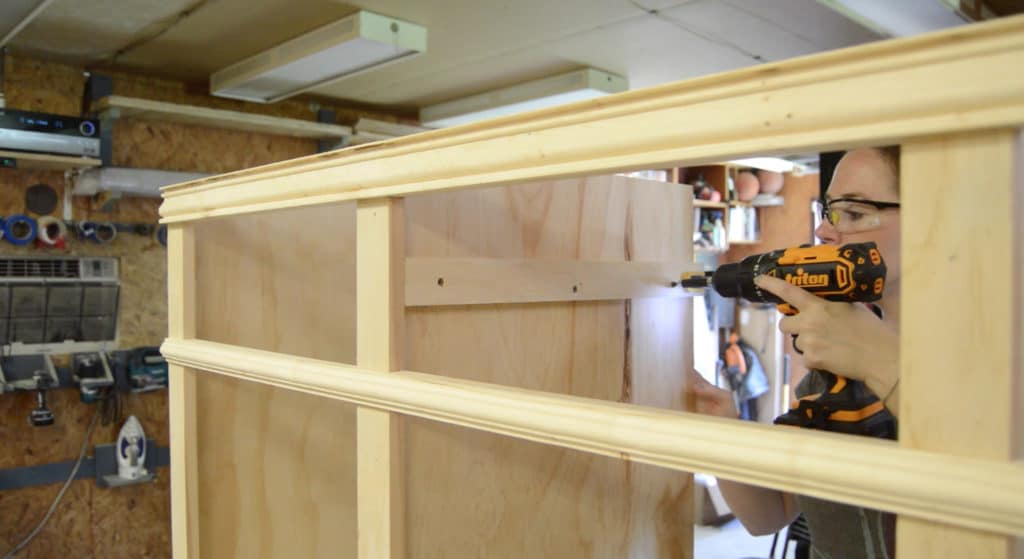 Now I took the slide and held it in place using a clamp, then I came back with three screws (that come with the slides) and attached it to the runner. 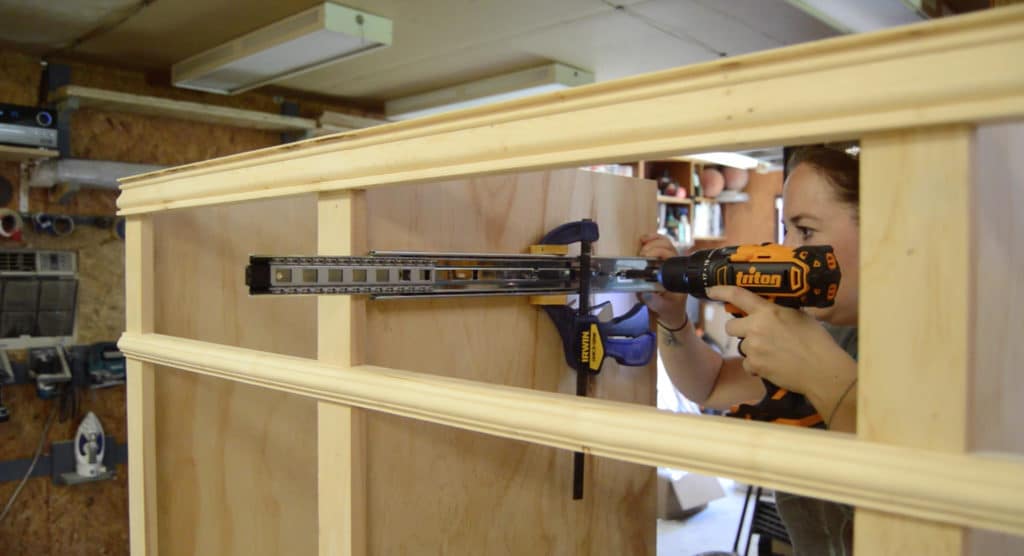 I repeated these steps until all the slides were attached. Once one side was finished I went to the other side and did the same. Note: it’s very important that the left and right slide line up with one another so measure carefully.

I’ll explain later on how to install part B of the slides. For now, just set them aside.

My drawers are made from 1/2″ plywood with a 1/4″ bottom. So I first bought a sheet of 1/2″ plywood and ripped a few strips. Note: Cabinet grade 1/2″ plywood isn’t going to be found on the shelf at your normal home store. I actually had to go to a local lumber dealer to pick this sheet up. 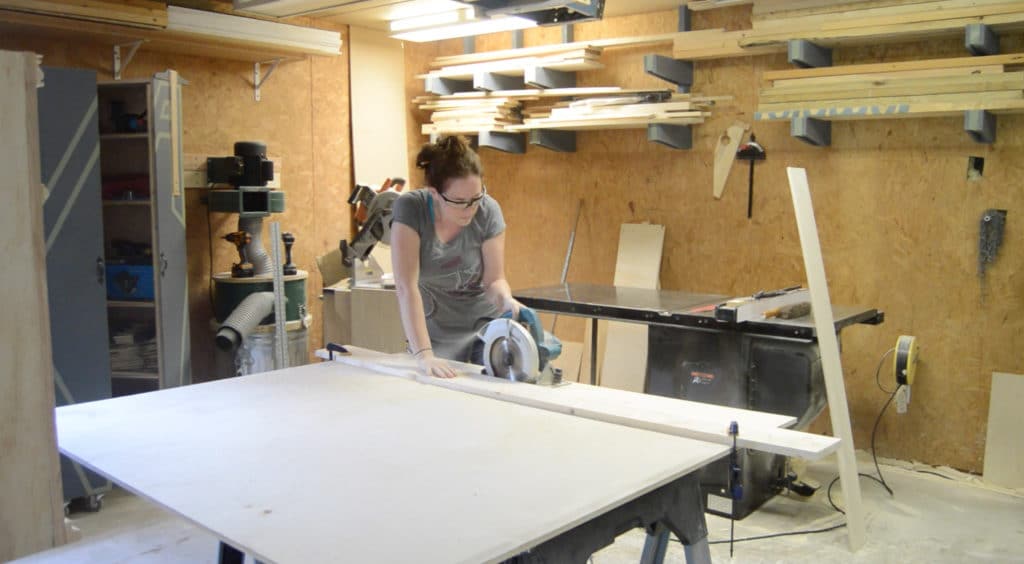 I took the strips and cut them to the different lengths to make up the front, back, and sides of the drawers. Note: The front and back pieces are placed inside the side pieces.

Next I took the front and back and drilled three pocket holes on each end.

Then I took the sides and the front pieces and cut in a 1/4″ dado along the bottom. The bottom piece doesn’t get a dado, but I did take it and cut it down so that it was just under the measurement of the dados. 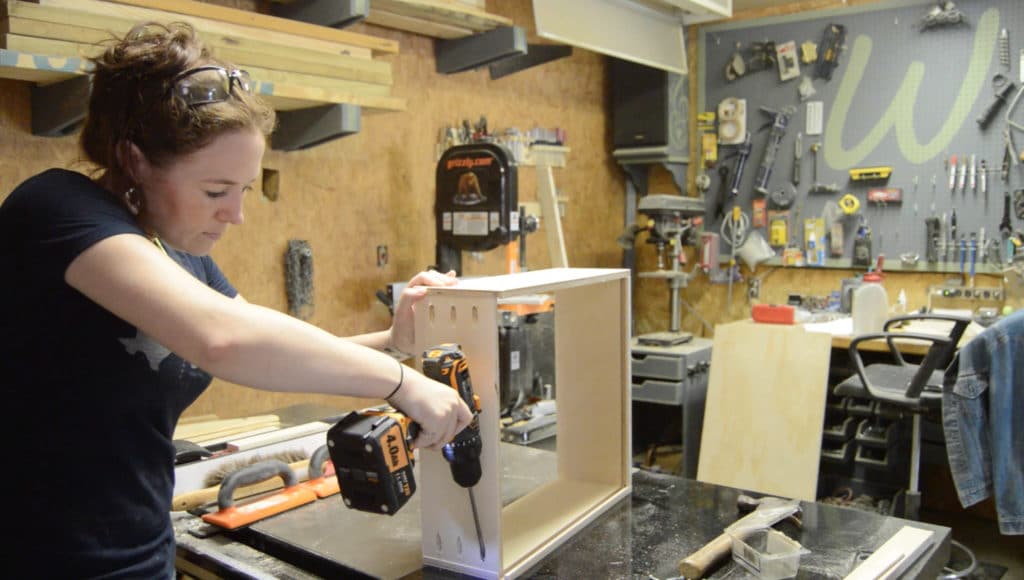 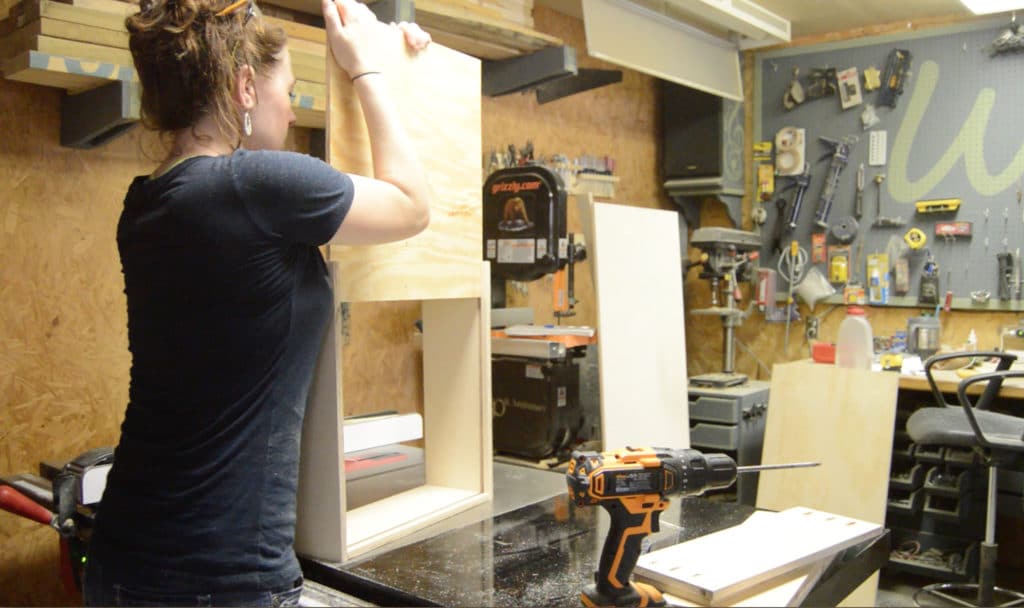 Installing Part B of the Drawer Slides

To actually install the drawers I cut a thin spacer and set it inside the first drawer spot. This is to lift the drawer while you are installing it so that it doesn’t hit the bottom of the frame when it slides in and out. 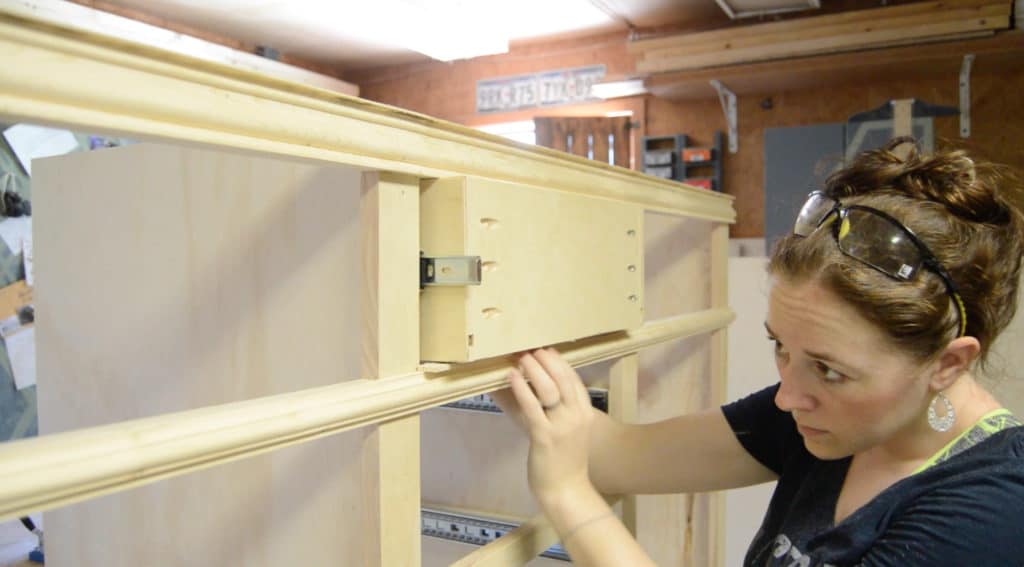 I took part B of the slides and aligned them with part A then reattached them. I pulled part B out until it was flush with the front of the drawers and used the screws that came with the slides to start attaching them. 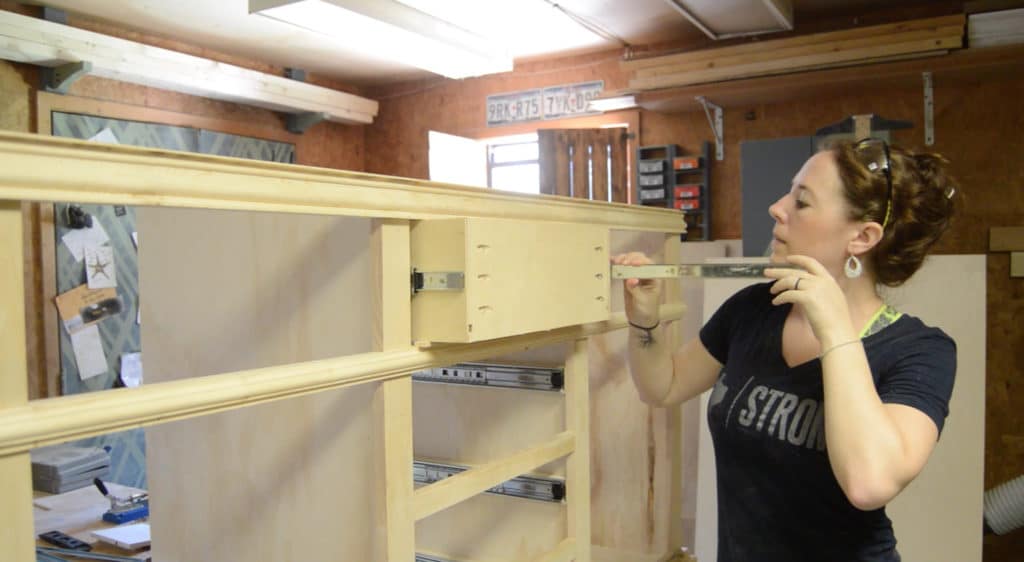 I first attached a screw in the front then pulled the drawer out a little more and attached it in the middle. To get a screw in the back you will need to disconnect the sliders as if you were going to take out the drawer. 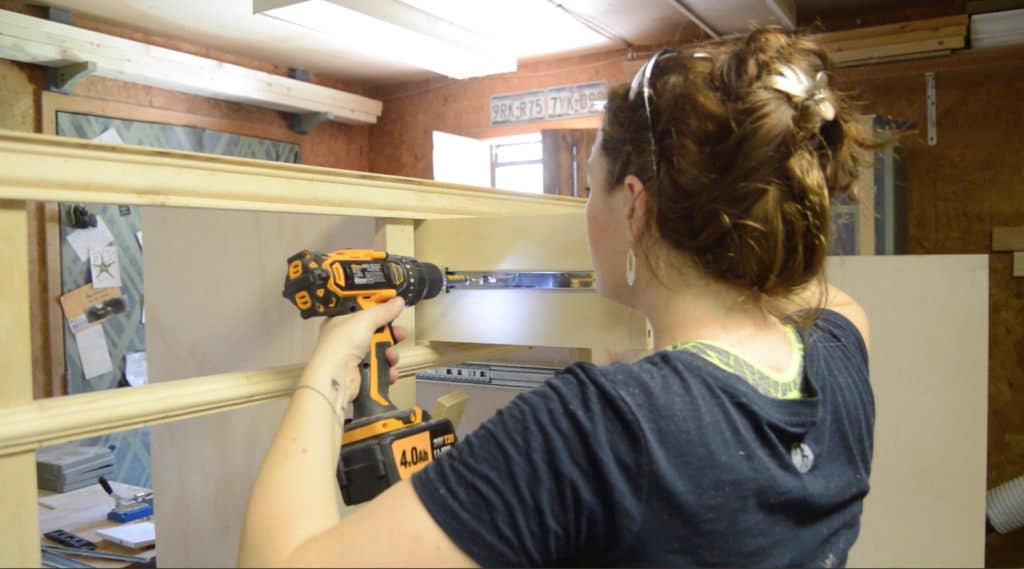 The reason these are not real drawers is because the sinks will be going here so there isn’t enough room for these to be functioning drawers.

I started by measuring the space then cutting a board to size. I would place the board in the hole and see where it was catching then go shave off some material until it would slide into place. I did this for both sides. 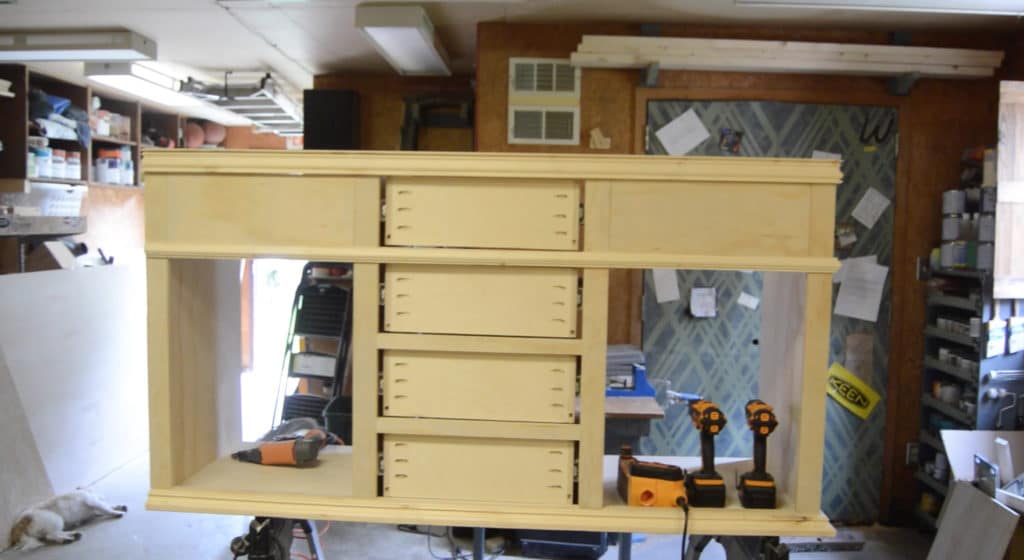 Next I repeated the process to make the faux faces for the drawers. However on these, once I had the perfect fit I would then go remove an additional 16th off each side. That way it won’t hit the frame when these drawers are moving in and out. 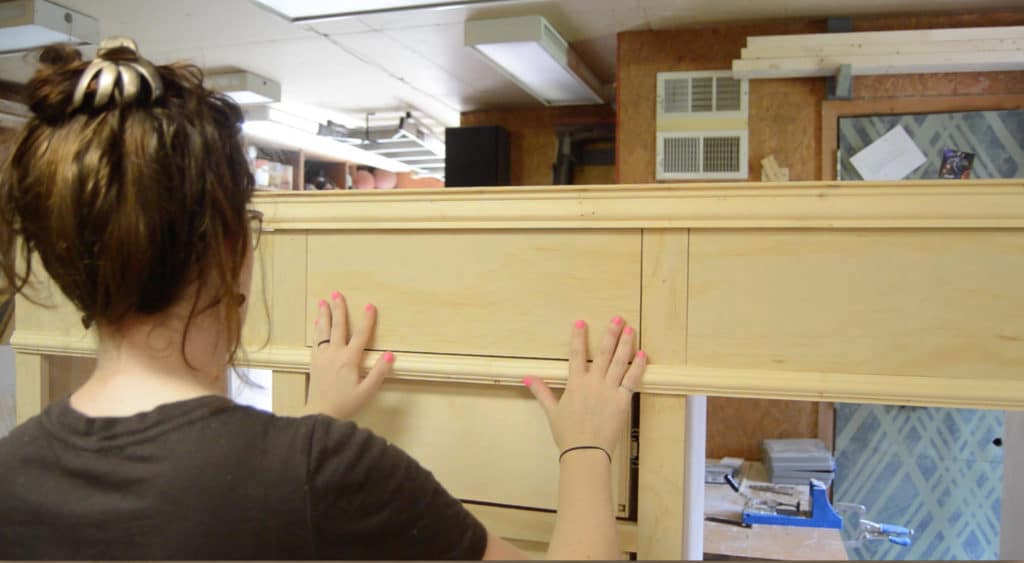 Once all the faces were made I removed them one by one and added some moulding around the perimeter to fancy it up a bit. I glued and nailed each piece into place. Note: I found this trim on the shelf at the local hardware store. 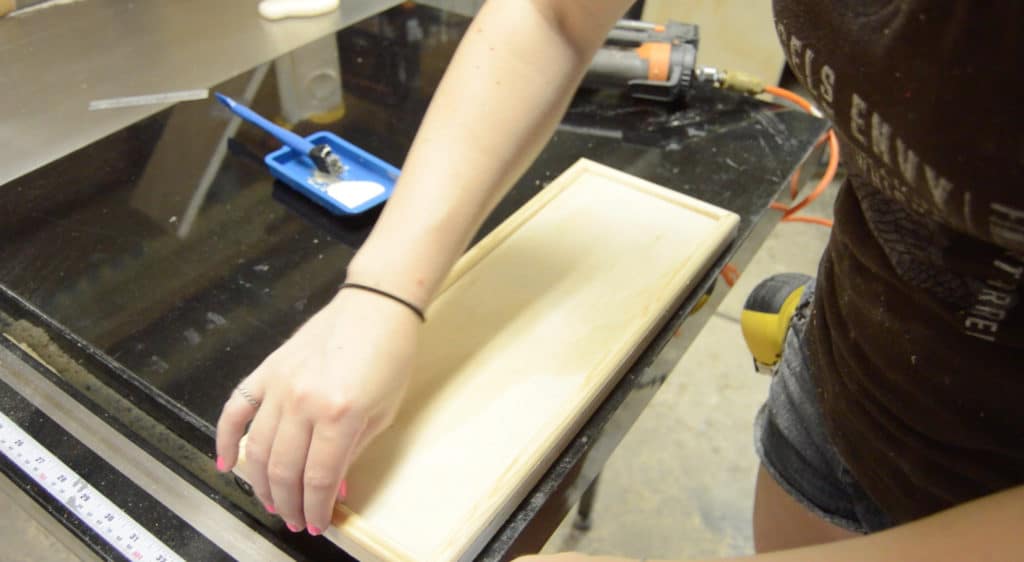 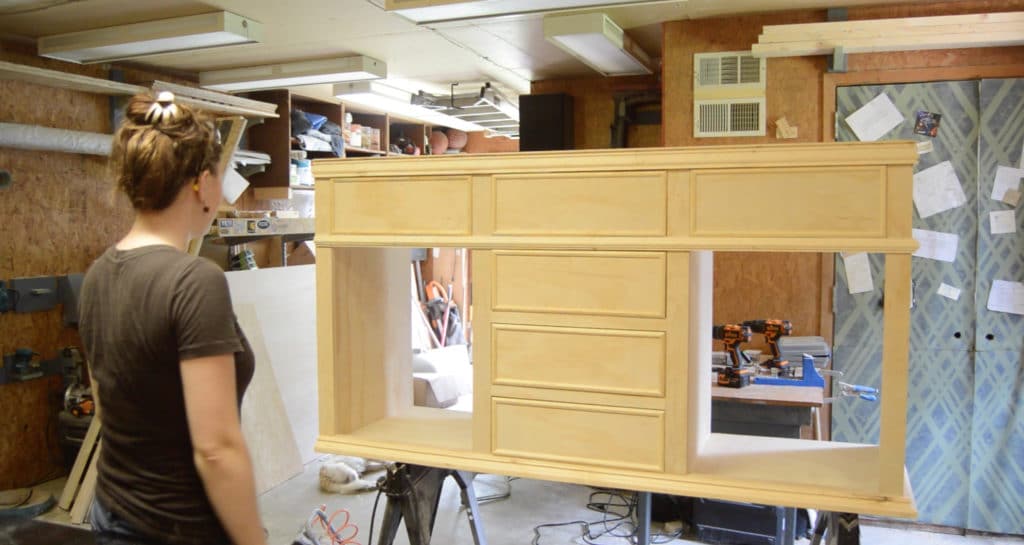 To install the faux drawers, I first drilled a few pocket holes then set the board in place and screwed it down. 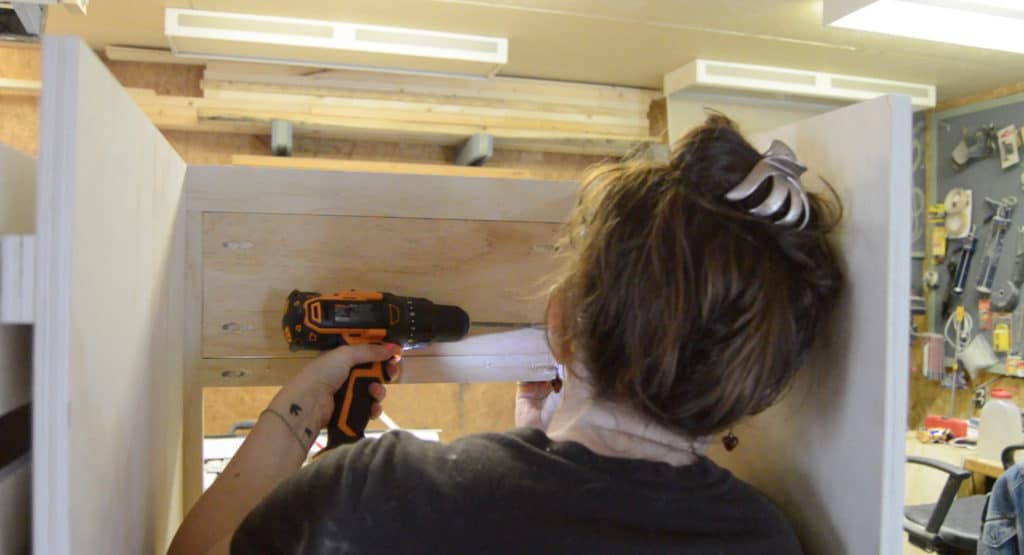 For the drawer faces I used my hot glue gun to temporarily hold them in place until I was able to get to the inside and secure it with three screws. 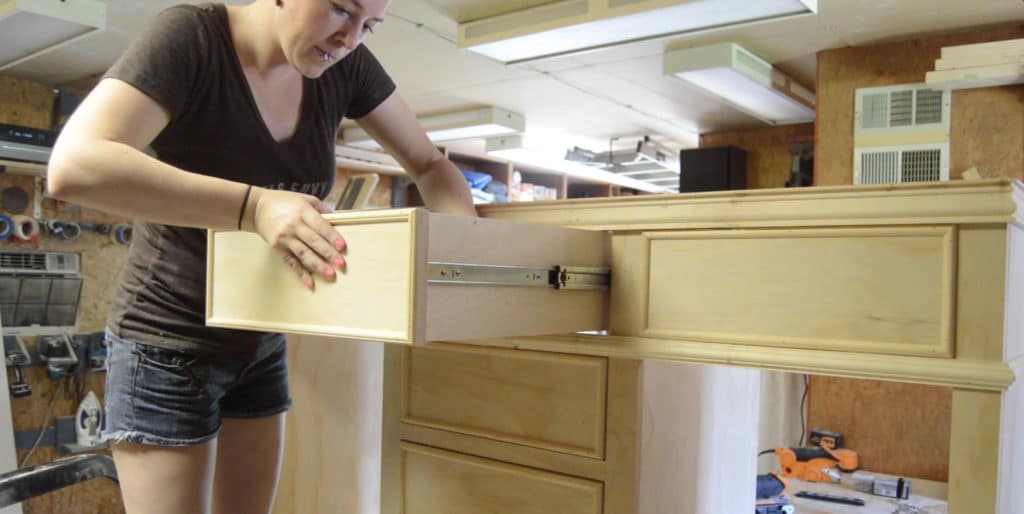 Making the doors was the same process: first measureing the space, cutting a board to size, then shaving it until it fit perfect. Once I had a great fit I cut an 16th off each side. 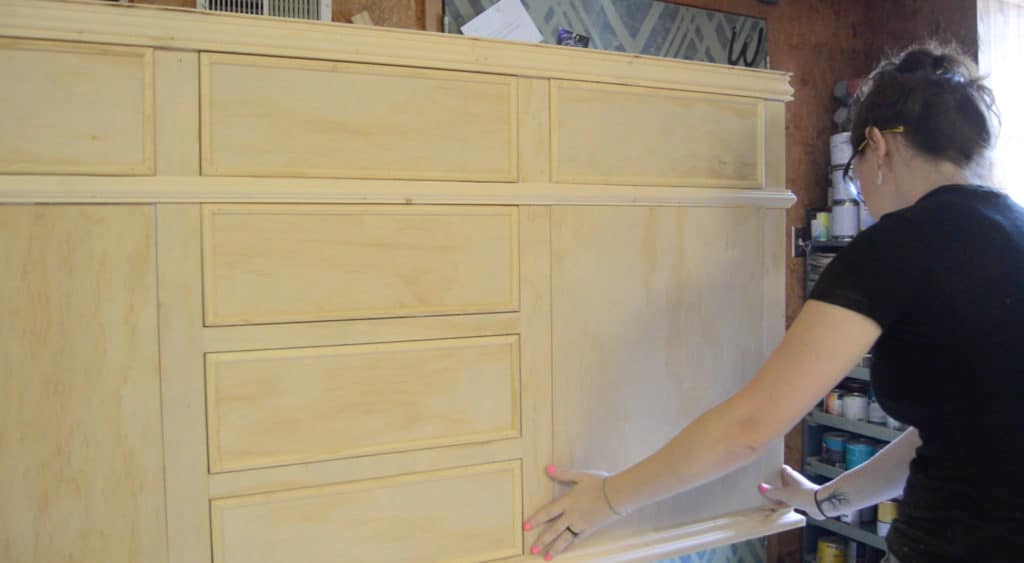 The hinges I purchased are for an inset door but without a face frame. Since my unit has a face frame I added a board to the inside of the cabinet to build up the area so that it is flush with the edge of the opening. I used two screws to attach this into place. 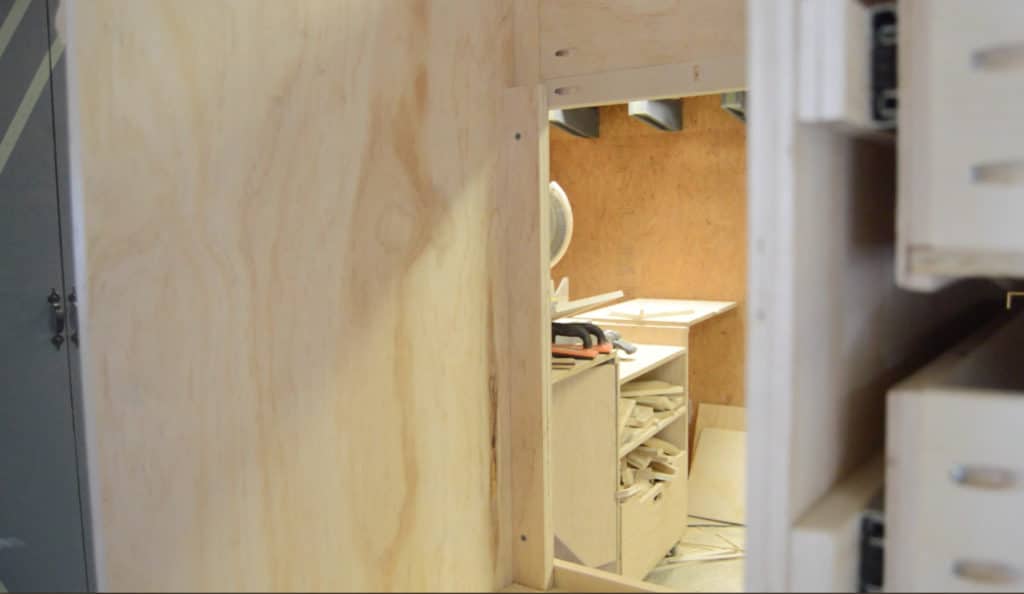 Then on the doors, I used a forstner bit in my drill press to bore two holes for the hinges. I set the hinges in place then used the screws that came with them to attach it to the door. 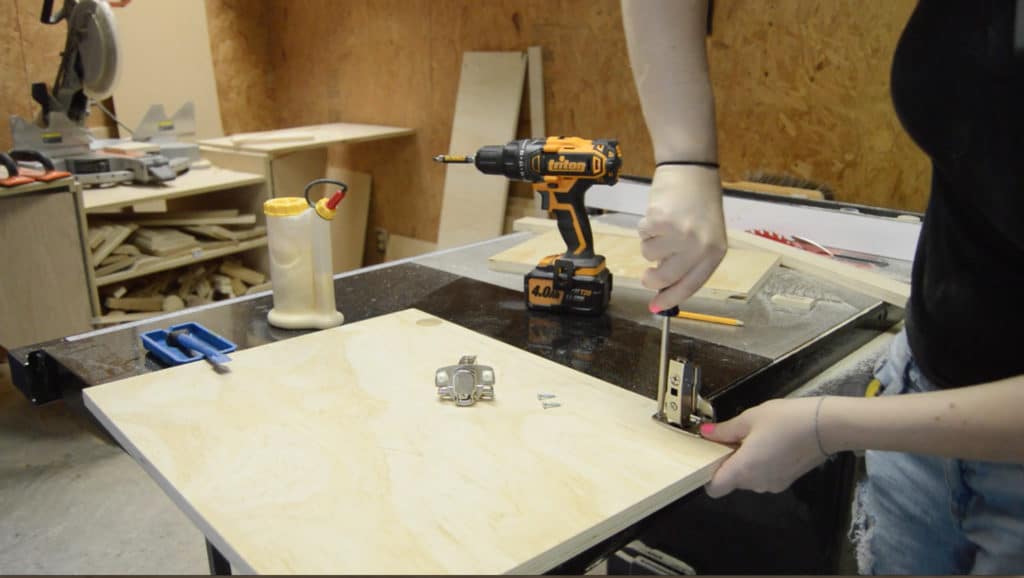 Next I took the doors to the cabinet and fit them into place then screwed them to the unit. 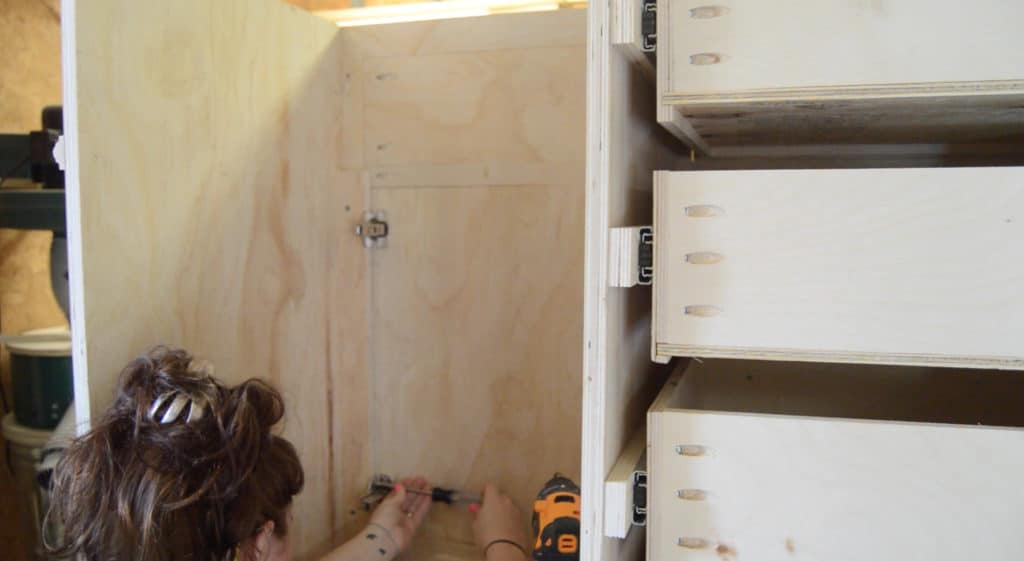 Once I had the doors just right, I took them off using the quick disconnect feature on the hinges and gave it the same trim treatment that I did on the drawers. However, since these are larger I went ahead and added an inside trim route as well. 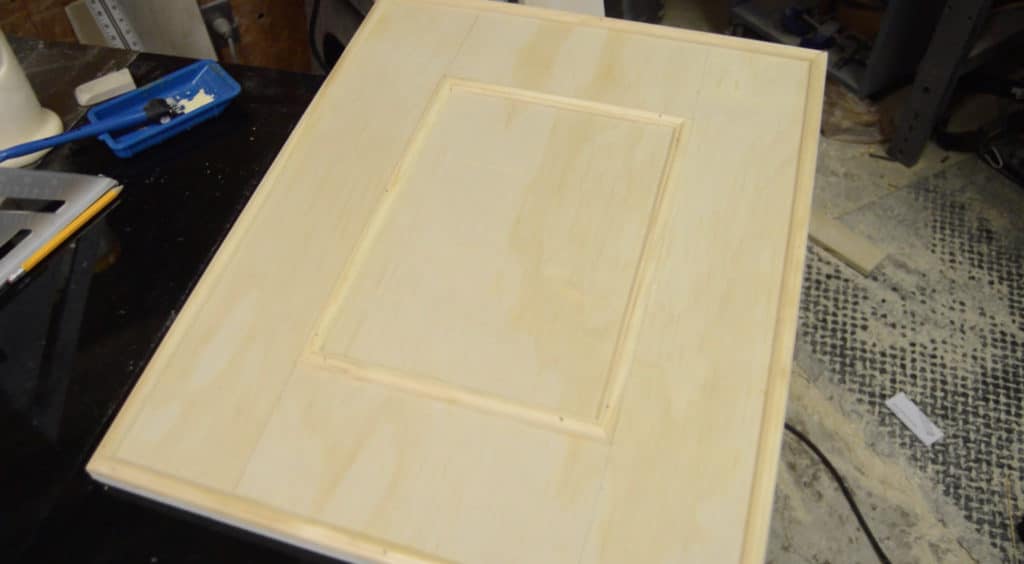 I stuck the doors back into place and that is as far as I got this week.

Lots of learning going on in the shop! This was the first time I installed sliders, made drawers, made faux faces and installed door hinges. : ) Exciting stuff.

Stay tuned for the next installment of my vanity!