My parents have been asking me to build a double sink bathroom vanity for a few months now. I told them I would love to build it, but the project has been pretty intimidating for me so I’ve been taking my time on getting started. However, I decided to stop putting it off and just dive in. So stick with me if you are interested in building your own bathroom vanity.

I started with a sheet of plywood on my sawhorses and started cutting what will be the sides.

Then I cut another piece to make the bottom.

I took all three pieces to my table saw and switched out my blade for my dado stack. I cut two dados in the bottom piece and a rabbet on one end of each side piece. 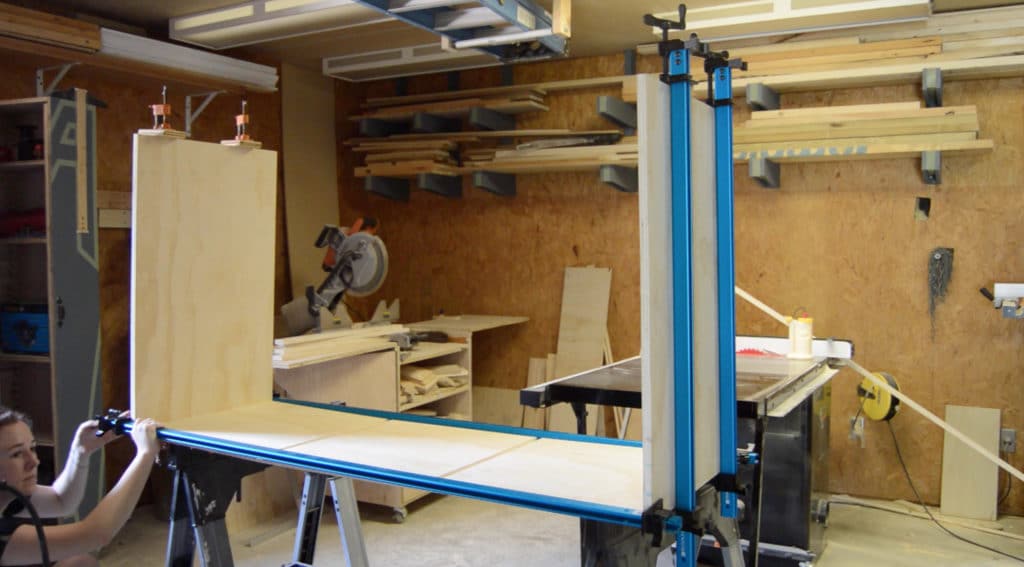 Next I cut the pieces that will be the inside walls. Once they were cut, I glued and clamped them in place as well. Tip: I used a speed square to try and make these as square as possible before clamping them down fully. I again let these dry for about an hour.

Then I cut the pieces to make the face frame. First ripping the strips at the table saw then using the miter saw to cut them to length. I took the stiles and drilled a pocket hole in each end then started attaching them to the rails. Note: I used the body as support to make attaching these easier, but I did not use it as a reference for attaching the stiles. I first attached the two end stiles and I made them flush with the end of the rail. Then I used a tape measure to place the two inside stiles. After attaching one side, I placed the top rail and attached it as well.

Once the frame was assembled, I put glue all over the front edges and attached the face frame. I first attached the top corners, using a countersink bit then coming back with a screw. Once the corners were tacked on, I put in a few more along the top and bottom rail. I will be adding moulding later that will cover up these screws. However, I used a brad nailer to hold the stiles in place while the glue dried.

Now I started cutting the pieces that will divide out the drawers. I have no idea what these are call or I would call them by their name. But I cut them to length and then drilled a pocket hole on both ends. I would measure down on the left and right and adjust it so that it was the same measurement then attach it.

Before moving forward, I went ahead and applied the edge banding. I went to every edge that is exposed and ironed on the banding, then came back with a chisel and trimmed up the edges.

I wanted to add some moulding to fancy it up some but I didn’t find any off the shelf that I liked, so I decided to make my own. I ordered some router bits that I liked and used some 2x6s I had. Note: If you don’t want to make your own moulding then you can buy some that you like, or just completely leave it off! It really isn’t needed. It was just an additional detail that I wanted to add.

I clamped a 2×6 on my workbench and took my router over the edges. Once I had the profile cut, I took the 2×6 to my table saw and cut it to the dimension I wanted.

I repeated this for the center and top moulding as well.

And that’s as far as I was able to get for the week. So stay tuned because next time I will be making the doors, drawers, and countertop.