Another project complete and I must say that I really like this one. Here take a look…

I originally saw the above photo probably about 6 months ago and just fell in love with the idea. See the metal cabinet in my shop right now is actually Cody’s. I have been waiting for him to organize his space enough to make room for it and that cubby hole thing you see. So last weekend I got the cabinet moved and instantly started building it’s replacement.

This is what my space looked like before this weekend….

I didn’t want to build one as large or as deep because I don’t have many things I need to stowaway so I designed one that would be only two cabinets at 9″ deep, 3′ wide when it’s opened (18″ closed), then 6′ tall. I wanted pegboard on one side, and adjustable shelves on the other and of course casters on the bottom.

This thing is totally customizable so if you want your own storage cabinet but want different dimensions then just use the same steps but adjust the sizes. Also, if you want shelves on both sides or pegboard on both, just make it anyway that will fit your storage needs!

Note: I’m using 3/4″ redoak plywood for this project only because I found 8 sheets for $15 (which is a steal).
1) First things first, I made all my cuts. I cut two backs, four sides, and four top and bottom plates. Click on the below photos to see my dimensions.

I put together a short video showing you how to set up a temporary fence in order to make very straight cuts using your circular saw. Check it out below.
2) Next I used my Kreg Pocket Jig to make pockets in everything.

3) Then used 1 1/4″ screws to put all four pieces together.
Note: I wanted the wingspan of my cabinet to be no more than 3’…so I cut the back to 18″ but by attaching the sides by placing them on top of the back, this is cutting the width of my useable space down to 16 1/2″. I’m fine with this but if you don’t like that then you can compensate by cutting the back to 19 1/2″.

4) Now repeat steps 2 and 3 and put together a second cabinet.
I tested it out just to make sure nothing was amiss….

5) I bought a 4×8 sheet of pegboard from Home Depot for about $18 and had them cut three pieces to size. Then used 3/4″ screws to attach it to the back first, then the sides.

WilkerDon’t: I’m sure anybody who has ever worked with pegboard already caught my mistake….Since I attached the pegboard directly to the back and sides, there is no clearance to allow for the peg to be inserted into the material. : / Drat. So learn from my mistake and don’t attach it directly to the cabinet.

6) I wanted enough clearance to use 1/2″ pegboard hooks so I grabbed some scrap 1/2″ wood and cut seven stripes for each side.

7) Next I laid one on each end then set the rest at every foot and glued/clamped them in place.

8) Then I started putting the boards back into their respected place and screwed them down using 1 1/4″ screws.
Note: By adding 1/2 stripes to the back piece this pushes the sides up by 1/2″. So your side pegboard actually need to be cut to 8 1/2″ and not 9″.
…and yes, I made sure a peg would go in before moving forward.

I know what you’re thinking….I’m not a fan of those gaps either but I can’t add on a faceplate to make it prettier because then the hinge would be screwing into that material and I don’t want that. Rather, I want the hinge screwing into the beefier material of the frame itself. If it really bothers you, you could cut skinny vertical strips and screw them in place. I’ve decided that I’m not going to sweat it. ; )

If you want shelves then you can go about it several different ways: You could just drill partial holes and use pegs, you could purchase metal stripes from the hardware store, or you don’t even have to have them adjustable! You can just screw them permanently in place wherever you want them. Options options….I wanted mine to be adjustable and I also wanted to make them.

I saw the below photo and loved it. I like the option of being able to move my shelves and like the support this gives the shelf instead of just two pegs on either end. 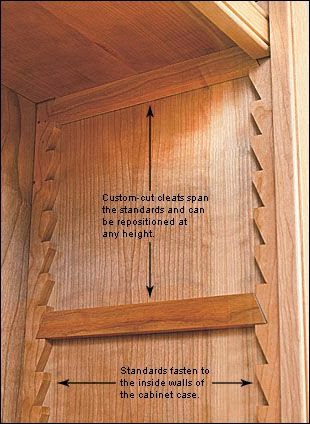 9) Since I’m only putting shelves in one of my cabinets I will need four stripes of those jagged teeth looking things. So I grabbed one of the 6′ stripes left over from making all my cuts in the beginning and used my speed square to start making my marks. I came in 1/2″, so I lined up the 5 to the top every time, then made a 45 degree angled line 1 1/4″ long.

10) Then I would slide my speed square down and draw a straight line across to make the top.

11) I actually used my table saw to cut it out. I set my miter gauge to 45 degrees then went through and made those cuts….

Then set it back to 90 degrees and finished them off.

Notes!
This is my first one I cut with the blade just high enough to cut through 3/4″ wood.

Then here is with the blade up as high as it would go.

Some of you might think it’s a lot of work to go through but this is the way I think about it: It took me about three hours to make these alone, but if I have this cabinet around for 10 years or even 5, then three hours is nothing and it’s adding a really flexible feature to my cabinet. So if you really want them then turn on some music, take your time, and enjoy yourself; you’re building something awesome.

12) After the first one was cut out, I was able to take it and just trace out my other three. Remember you need to flip it over in order to make a left and a right side! If you forget to flip it then you will end up with four of the same side.

Long Information Rant: So like I said, instead of working with a 6′ strip, I cut mine in half so each side had two sections that were around 3’long that I joined together to make one strip. After I finished the first one I actually made the second one from using the speed square again but before I cut it out, I noticed that the points didn’t 100% match up to their counterpart (the first strip). They weren’t off by much, but it still bothered me because these teeth lining up to one another will determine how level/straight your shelf will sit. So I erased those marks and ended up using that first strip as a template, where I flipped it over (because it needs to be a mirror image not a copy) and traced around it to make the second strip. These lined up 100% so I got to cuttin. Lesson? After you make your first strip, use it as a template to make it’s counterpart. Then use those two as templates to make the third and fourth. …oh gosh I hope that makes sense. You should use the speed square to line out your first strip. Then use the first strip as a template twice, and the second strip you cut as a template once.

13) Next I cut the remaining three strips then screwed them into place with 1″ screws. Use clamps to hold that outside strip flush with the frame while you attach it. Then flip your unit over and screw in the other two.

Note: Be careful when you flip your unit over to not loose orientation of which side of the cabinet is the bottom and which is the top. Before screwing in the other side’s strips make sure you are facing them the correct direction. ; )

15) I made each shelf 16 1/2″ x 9″ then used my table saw to notch out the ends to the dimensions shown in the below photo. Again, I raised the saw blade as high as it would go so it would reduce how much the blade cut into the back.

Now you can make however many cleats and shelves you would like and position them anywhere. : ) I don’t know about y’all but I think this is pretty cool. I went ahead and made a lot of cleats and just stuck them in a step for storage. That way they are already on hand if I want to add a shelf, which I will keep somewhere close by.

I originally only put on 6 casters but since the unit is so tall it needed more support so I ended up using 8 total.

16) I used 3/4″ screws to attach the 3″ casters and came off the middle line (where the two cabinets meet) 1 3/8″ so that those two center wheels don’t collide when I’m rolling the unit around.

17) Then I flipped it over on it’s face and attached a piano hinge.

Note: To attach the hinge I first positioned the hinge on one cabinet at a 45 and clamped it in place. I went through and marked, with a pencil, each hole then took the hinge off and put it on the other cabinet, again at a 45, and clamped it in place then screwed it down. Then I pushed the two cabinets together and flattened out the hinge then lined up the holes to my pencil marks and screwed that side in place. By doing it this way, you are lining up the hinge so it won’t have interference issues when you open/close the unit.

Note: Also, be careful using a drill on these tiny screws. It is very easy to over tighten the screw and turn the hole to mush. I would suggest setting the clutch (I used setting 3) or use the drill to screw them in most of the way then come back with a hand driver to finish them off.

Only thing left is to stand it up and get to filling her. Here is a short video so you can see it in action!