Wanting to decorate my office for Halloween, I spent some time looking around Pinterest and made a little collection of simple and easy things to make then went to the Dollar Tree and spent $23 for all my supplies.

Below is a breakdown of my projects with the original picture and (if there was one) a link where I found instructions, then also tips from me from my build.

1) I grabbed two bowls and two candle plates then gave them a quick coat of brown paint. Tip: On clear items, you only need to paint the inside of the object.

2) Next grabbed two pumpkins and used an oil based sharpie to draw in little eye balls then used my hot glue gun to stick everything together. 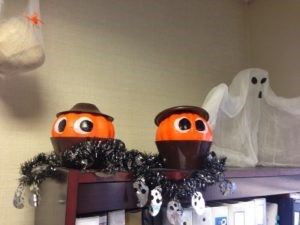 My next project was an original idea.

1) Now the Dollar Tree sells black flowers, but only roses. I didn’t want roses for this project because the bloom is too closed for my liking. So I grabbed whatever these suckers are called and just spray painted them black then used hot glue to stick the eye balls in place. You can find a 12 pack for $1.

2) Then I grabbed a smidge of white spider web stuff and spread it over the top. Then grabbed a larger handful and shoved it in the base of the vase with a few plastic spiders. 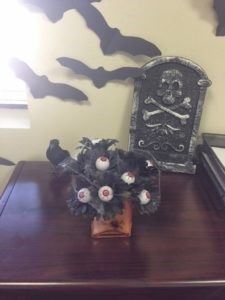 I absolutely had to have one of these….I found a raven and a liver at the Dollar Tree for mine. I also grabbed a small thing of foam and black netting. Click here for the original instructions.

1) I grabbed a Dr. Pepper liter and cut the base and threads off.

2) Then made a base from 1/4″ wood I had, and cut the liver to fit inside the bottle.
Tip: Since cutting the liver made the white inside show, I just used a red sharpie to color the part that was exposed so it didn’t stand out as much.

3) I had one eyeball left over from my flowers, so I spray painted it black and used hot glue to stick it on. Then I hot glued the net and attached a couple spiders. Lastly I wrapped the green foam in another piece of black net and glued the liver and raven to it then put the whole thing together! I made one more pass with the hot glue around the base of the bottle so that it can’t be pulled up. 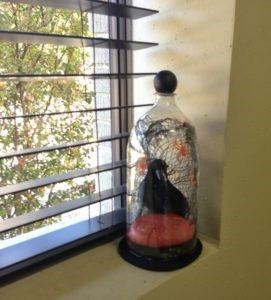 1) I’m not a soda drinker and used my only liter bottle up on my last project, so I grabbed an OJ bottle. The foam ball wouldn’t stay, so I made the below rig to make the structure of my ghost. (the wire that makes the ‘hands’ is just wrapped around that stick.

2) I draped the cheesecloth and sprayed with starch.
Tip: Instead of using a whole sheet, I cut two lengths and over lapped them on the top. And no, I couldn’t find cheesecloth at the Dollar Tree. I bought it at Walmart in the sewing aisle.

3) Now I cut eyes and a mouth and taped them on. 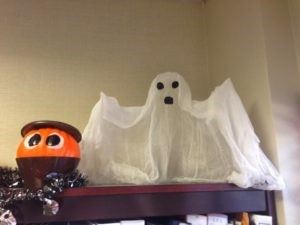 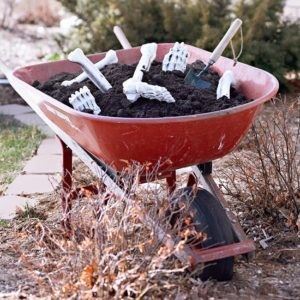 So with this being for my office, I couldn’t very well bring in my wheelbarrow so I decided to grab some cardboard and make a coffin.

1) I grabbed a skeleton and used a pair of scissors to cut him up. (the guy’s dead so it’s cool)

2) Then I cut out a bottom and side walls  from a box lid I had and used hot glue to put it all together.

Here’s a short video. After I put it all together, I realized that I didn’t make the sides tall enough, so I ripped them off and just cut new ones and re-glued them.

3) I flipped the coffin over and traced it to get the size of the lid right, then cut it out.

4) I gave everything a coating of black spray paint then used a white sharpie to write RIP.

5) Filled her full of dirt and made sure my dead buddy was cozy!

1) I went through my crafts box and dug out all my black construction paper then used the template provided by Country Living to cut them out. Click here for the template.

TIP: Cut out the template but don’t bother tracing it onto the construction paper. Just hold the template in place then cut around it. Also, to speed the process up, I cut two pages at a time so that with each cut I was actually cutting 2 bats. I ended up using 40 bats total to decorate my office. 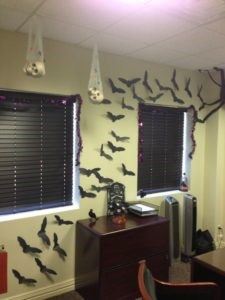 1)  I used more of that black netting to create this web. I cut a square and taped it in place, then took the corner and folded it up to turn the square into a triangle. Throw on a couple of spiders and you’re done! The inspiration does it a little differently; to see the instructions click here. 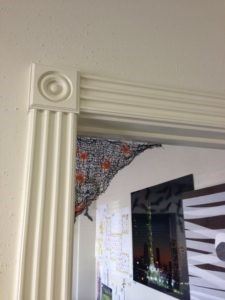 1) I bought a package (which comes with two rolls) of white streamer material and simply cut the strips then taped them in place. Then I cut the eyeballs and used a sharpie to color in the pupils. 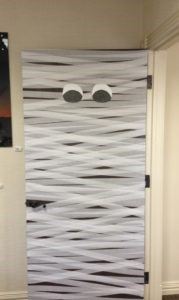 Oh my goodness. Stop everything, I am in love.

Click here to see the original instructions which are pretty good. I only have a few things to add…
1) First thing to note: I went to Home Depot and bought 1 1/2″ PVC that was at the opening of an aisle and was already cut in 2′ joints. This stuff is called schedule 40 and is thicker and therefore more expensive then schedule 20. So for this project, buy schedule 20 to save yourself a little cash.

2) I brought the PVC home and used finger nail polish remover to take off the writing on the side. Tip: instead of using a rag or cotton ball, I grabbed a small bundle of steel wool and the writing came off like …..like…..well I don’t have a good analogy for how easy it was…but it was easy and took no time. ; )

3) Next I used a hacksaw to cut the joints into different lengths then used sand paper to smooth out the cut ends.

4) I grabbed an old pool noodle from my backyard and used my hacksaw again to cut a few different lengths to shove inside. Tip: you don’t need to fill the entire length of PVC, you just need to create a base so your tea light candles have something to rest on.

5) Now I go through and start hot gluing. I created a short video for you visual folks out there…
Here is a second grouping I made….

6) I spray painted my candles with just plain white since I already had it. Note: I removed my pool noodles and tea lights before painting.

1) I bought a package of spider web material, four skulls, and a thing of spiders at Dollar Tree. Then tore off a small amount of web and made a nest for the skull then tied a knot at the top. Next, I just threw on spiders and used the ceiling tiles to hold them in place. 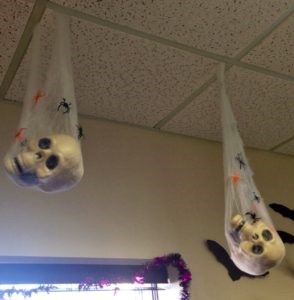 1) This one was actually just happenstance. My birthday was the previous week and co-workers threw a bunch of balloons in my office and this black one just happen to be among them. I kept it and taped it up then used black streamers to give it legs. I had seen this in a teacher’s classroom years before and thought it was too cute. 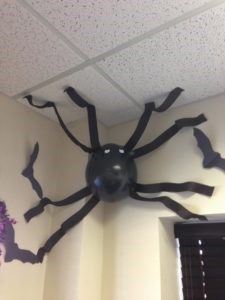 Anybody who follows my blog already knows that I can’t draw, so any time I want to do something like this I grab my projector to project the image and just trace it.

1) I took the measurements of my windows, and bought black poster board at the Dollar Tree then looked on the internet for the images I wanted my windows to have. I settled on a witch in one and ghosts in the other.

2) Then I just cut them out and stuck them on with tape! 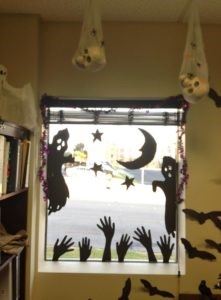 For this one, I found the ghosts online then traced, cut, and taped up, but the window looked too empty with so much extra space so I made a bunch of traces of my hand then cut those out and taped them up as well. Tip: The eyes are too small on the ghost to get with scissors so use an exacto knife if you have one. 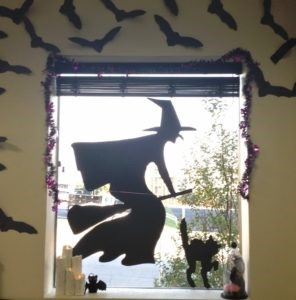 I wanted my witch pretty large, so I just taped two pieces of black board together to create a larger space.

Well that’s all I got! I’d say my office is thoroughly decorated. ; )