Hanging a Ladder from the Ceiling

Ladders are handy to have around but can be difficult to store. It’s simple to throw a couple hooks on the wall and store it on it’s side, but then a whole wall is knocked out of use. That is why storing it on the ceiling is the route I wanted to go with the two I have.

Here are photos of the finished hanging assembly I made. 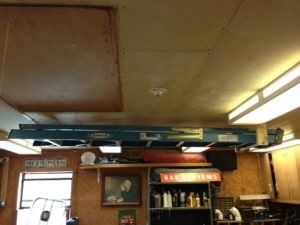 Pretty convenient huh? Just as a side note….I got that 6′ Husky ladder for $5 at a garage sale. What?! People are crazy, but I’m not complaining.

Handyman put out the above photo where the concept is, you stab one end of the ladder in, then it will roll through until you have enough room to stab the other end. Really simple concept and super functional. Buuut, I have two ladders that flare out at the bottom instead of remaining one length like theirs. Which of course, could be compensated for in the build, but I thought it much simpler (and just as functional) to have a roller bar on one end and a plain ole hook on the other, so that’s what I did.

If you think my set up will work for you, here is the how-to:

What you will need for one holder:

1) I wanted my ladder to be as low profile as possible so instead of making my 2×4 16″ long like Handyman, I measured how deep my ladder was and just added a couple inches to give it room to tilt, and it came out to be 10″ total. So I grabbed a couple scrap 2x4s and cut two of them to length.

2) Next I purchased 3″ right angle brackets and 1/4″x1″ lag bolts then bolted them in place.

Tip: When bolting on the right angle bracket, don’t just guess at where it needs to be. Take a spare piece of wood and butt it up against your 2×4, then put the bracket in it’s place. This way the spare wood is representing where the ceiling will be and the bracket will be sitting flush against the 2×4 and (eventually) the ceiling when all four bolts are in. 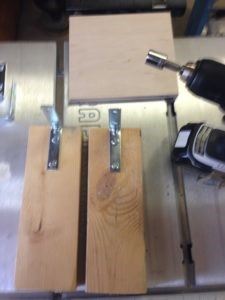 3) In order to make the hole in the bottom I measured 1″ from the end of the board and marked a line. Then measured 1 3/4″ in from the side to find center and made another mark. I first drilled a pilot hole, then moved up to 1/2″. 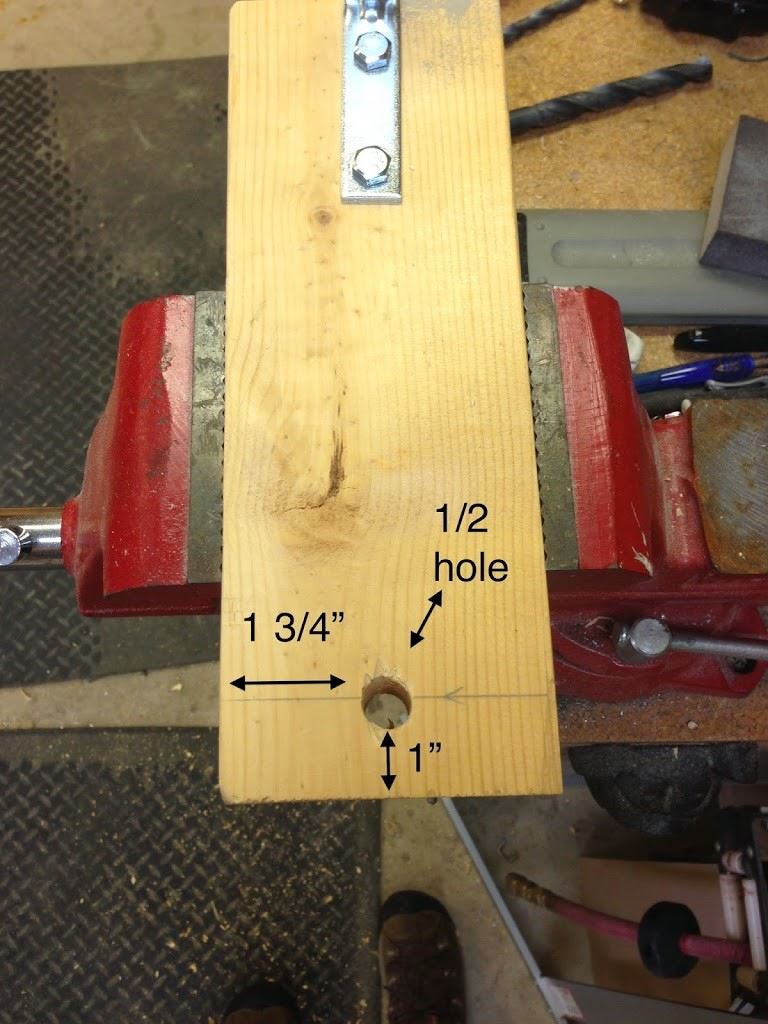 The next part calls for 1/2″x2′ threaded rod. Below is a photo, and it is found in the hardware section of Home Depot. 5) Now, before you can put everything together, your 2′ PVC will need to be cut. The hardware and the wood takes up 6″ of the threaded rod, so your PVC only needs to be 18″ long. I used a simple hack saw in order to cut mine to size.

And now you have a hanging holder…ok that’s a dumb name, but I don’t have anything better. : ) 8) Then I measured down 4 1/2′ and made a mark for where I would put my hook. Even though my ladder is 6′, I will need some overhanging in the holder so it doesn’t fall, and I wanted my hook to be grabbing on the last step.

Tip: I found these hooks at Home Depot for around $2. In order to put it in, I used a 1/4″ bit to drill a pilot hole then just screwed it in place with my hands. And that’s it. Now in order to hang it, stab the top of the ladder through the holder first, then lift up the bottom end and hang it on the hook. 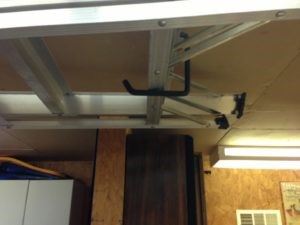 That lip you see there on the hook keeps the ladder from rolling forward.

Since I also have an 8′ ladder, I just repeated my steps and created a second assembly and utilized more wasted ceiling space! I know I’m bias, but I think this completely rocks!

**Update** Below is a video showing the build process: