I have this giant wall space in my living room I have been trying to think of a way to fill up for a while and I just couldn’t find any idea that I really loved. Until! I saw this huge clock… 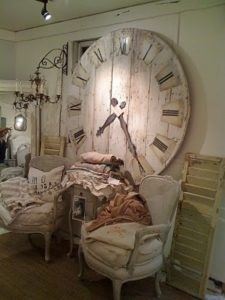 How cool is that?! I instantly fell in love and decided to make my own (although my husband vetoed making it 6’…boo). Here is the wall space I’m working with… 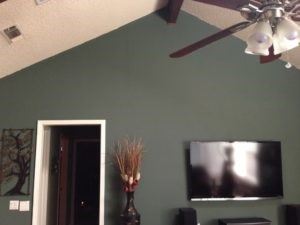 Just to save you from having to scroll down to see the finished product, here is my finished clock… 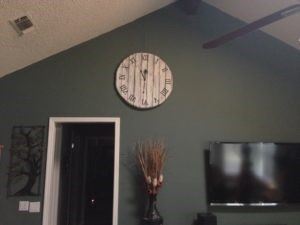 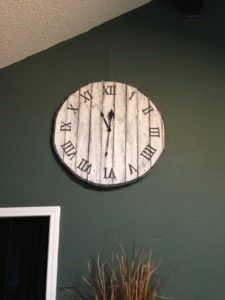 I must say, I really love it….buuut….I want it bigger. I went ahead and hung it up for the mean time, but I have already decided to make another one that is about 1/2 foot bigger. This one is just shy of 3 feet in diameter.

Anyways. Want the steps to make your own?

1) First thing I did was figure out how big I wanted it.

I’m all about saving time where I can so instead of messing with individual boards to make the clock, I grabbed an old beat up looking fence panel off the side of the road that somebody was throwing away. (the same house that was throwing away that stool I resurrected. Double score.)

2) I figured if I wanted my clock to be 3′ in diameter that means the radius is 18″. I eyeballed where center was on the fence panel and drilled in a small screw with some of the head still sticking up, then tied a piece of string to it. Then I took my tape measure and measured out 18″ and tied a paint brush on that end. Essentially you are making a compass. 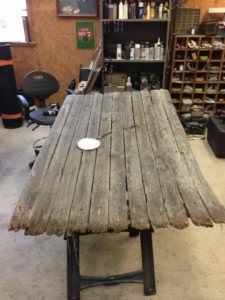 If you have trouble visualizing what I’m saying, below is a closer view. You can barely see the screw on the left hand side of the photo, with the green string tied around it. Then the string, in a straight line, measures 18″ and that is where the paint brush is tied on there at the end. 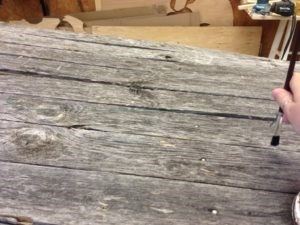 I tied on a paint brush because of the dark fence wood I was using. Feel free to use a pencil or pen or whatever would work best for your material.

3) Now I got the white paint out and made me a circle. Just make sure you hold the string tight and go around until it’s complete.

4) I got my jigsaw and started cutting it out. 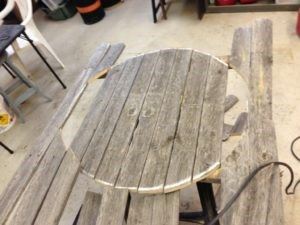 5) The jigsaw cut through the slats just fine, but not the horizontal railings that were nailed on the back of the panel. So after I finished the circle, I flipped the panel over and used my circular saw to make those cuts. 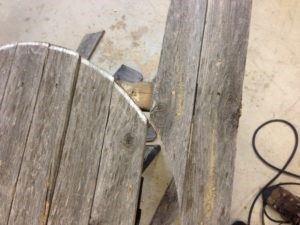 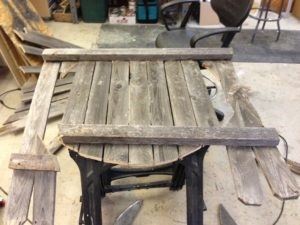 …and now I had a circle. 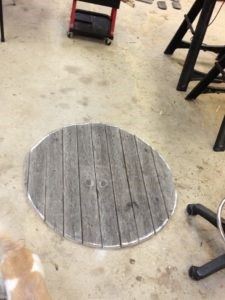 6) The railings on the back were, of course, really thick and I could have left them but they would have made the clock stick way out from the wall once it was mounted. So I went ahead and used the claw side of a hammer and removed the nails and the back railings. Since this is the back, don’t worry if you scuff it up some. It will never be seen.

7) Since I removed the existing rails, I had to create my own. So I pulled these small scraps from my wood pile and screwed them in place. 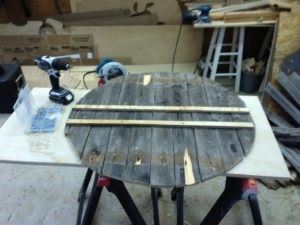 Note: I chose to screw these rails in from the back because I didn’t want to have a line of nails/screws showing in the front, in addition to the holes from the old nails. If you do it this way, just make sure to choose a screw length that won’t go through to the other side (the face). Also, this is old fence wood that is not completely straight, so I ended up putting in two more support rails in order to help align things better (seen in later photos). Again, the back doesn’t matter because it won’t be seen.

8) Next I flipped it back over and painted it with some antique white paint. Since I was going for the aged look, I didn’t paint it perfectly. I literally just kinda slapped it on without trying to get every spot, or make it even.

10) I wanted a black boarder on mine, so to make sure I got it even around the entire thing, I grabbed a stick and measured out 1/2″ then drew a line. Then I went around the entire circle and placed the stick flush with the end of each piece of wood and drew a line on either side. In order to get an even line just make sure you are keeping the paint stick flush with the board regardless of where you are in the circle. 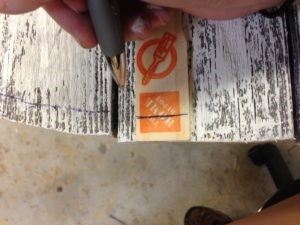 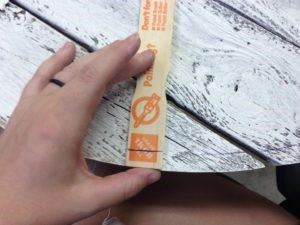 11) Then I went back through with a small paint brush and black paint. 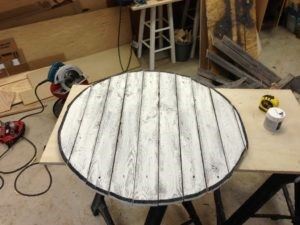 At this point, my dog Luke thought it would be a good idea to take a break. So I took a break….: ) 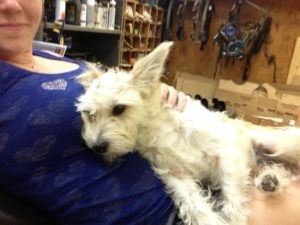 12) After things were dry, it was time to start putting on the numbers. After playing around some, I decided that I wanted my numbers to start 2 1/4″ from the edge, so I shorten my string and replaced the paint brush with a regular pencil. 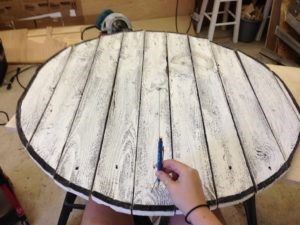 13) Now the numbers need to be 30 degrees apart in order to be accurate. You can eyeball it if you want, but a simple way to make sure it’s right is to grab a protractor (seen below). Then you hold your string tight and go to 180 degrees and place a mark, then 90 degrees then 30. Then go to the other side and do the same. After you have the top numbers marked off, flip the protractor over and repeat until all 12 numbers have a place marker. 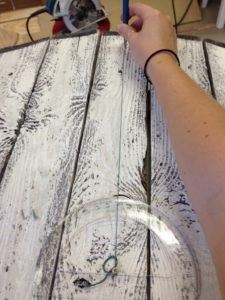 14) Now I’m sure they sell Roman Numeral stencils somewhere, but I just created my own. Instead of doing all the individual numbers I just created an I, V, and X. The ones I created are 3″. Check out my post here if you want to make your own.

15) Next I started at 12 and started tracing on my numbers. 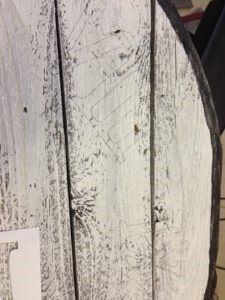 1) If I were to make another one I wouldn’t bother with tracing them in pencil first, but would just paint them directly on. The reason I did it this way was just to ensure that they were all going to fit and I was going to like their placement.

2) There are two ways to make the Roman Numeral 4. One way is IIII, the other way is IV. I didn’t know this until I already painted my numbers on and somebody brought it up that I had it incorrect. Wikipedia goes into detail on the two variations but after reading that Roman clocks typically use IIII, I went ahead and stuck with my decision. Just know that you have two options here.

16) After seeing everything fit perfectly, I went back and used my stencils to paint the numbers on. 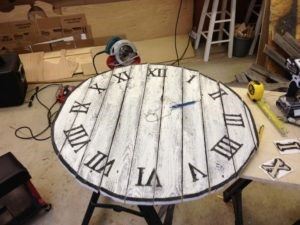 17) I removed the screw from the center and tossed it aside.

I had bought a high torque clock motor (they call it a ‘movement’) and the longest arms they sold in store, from Hobby Lobby in preparation. If you are making a big clock like this, then you must use a movement that says “high torque” or it won’t have enough mojo to tick your clock. These motors are super easy to put in. Typically you just drill a hole and throw it all together in the right order. Well…I ran into two problems.

The first was, the center of my clock ran into one of my railings. The second was, the fence wood was so thick that the spindle part of the motor didn’t actually poke all the way through. No fear, there is always a solution. 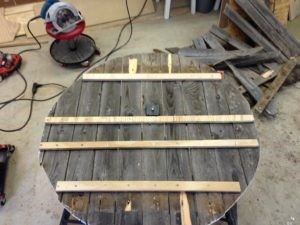 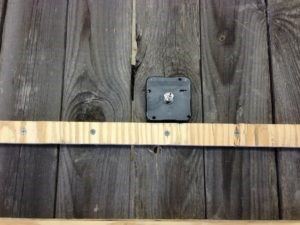 18) I didn’t want to remove the entire railing in the way so I used an awesome tool my Dad gave me in order to just cut a section of the rail out. It’s a product made by Rockwell and it’s a great portable circular saw for smaller projects. It was the absolute best tool for this particular task.

19) Then I took my router, and routed out enough material where the threads on the spindle would poke through the face. (To be able to put the hands and nut on) 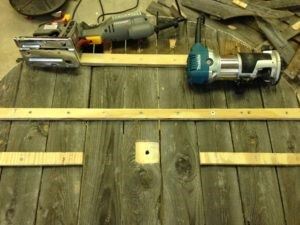 20) Next I just followed the instructions on the motor box in order to put the hands on, then threw it up on my wall! 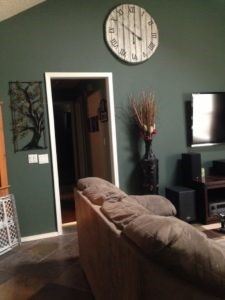 Here are a few others I ended up doing so I thought I would share: 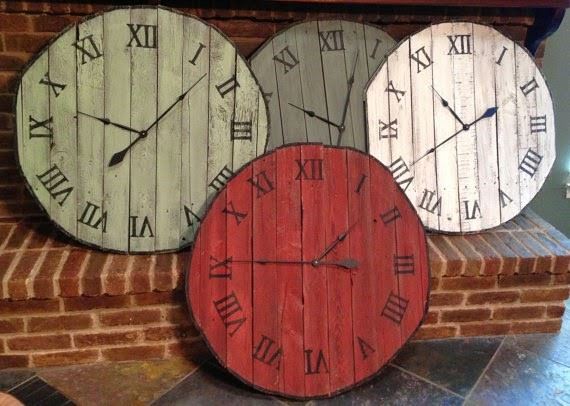