The absolute last thing on my laundry room renovation list was to build a pantry and as of today I can now proudly put a check by it. There was so much that went into this build I’m not sure how well I am going to consolidate all the steps and information into a coherent blog post but if you are interested, here is my attempt….

Quick Note: Keep in mind I do not have any training; I literally just get out in my shop and try to figure it out. I ask tons of questions from people around me like co-workers and my husband and of course I get as much information off the internet as I’m able, but even with all of that, I’m sure that if a real carpenter were to look at my work they would be able to find plenty of flaws. I’m just throwing that out there because I might not be doing things technically correct. BUT! at the end of the day I needed a pantry and I built one to the best of my ability.

THIS! is the finished product. All 8 regular drawers pull out so nothing gets shoved to the back and forgotten about. The top left has drawers made to hold boxes in an organized fashion. One for smaller boxes, and one for larger. The top right is a wine/liquor pull out rack. 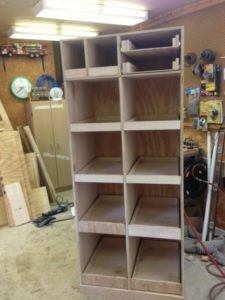 12 22″ full extending ball bearing slider
Note: If you know you are going to paint your unit, then buy something cheaper then birch. I wasn’t sure, so I spent the extra bucks to give myself the option of staining it if I wanted to.

2) Using the Kreg pocket jig I made the pockets that I would use to join the top to the sides. Now they say to put the holes in the position where they are going to be seen the least, so since this was the top and my unit is over 6 feet, I faced them up. 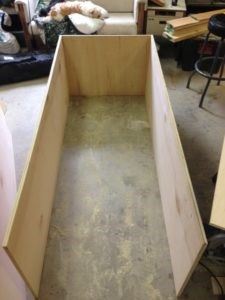 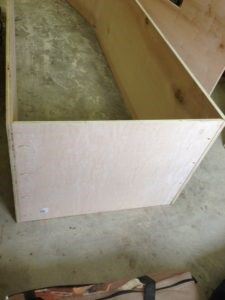 3) Next, using the same dimensions as the top, I made the bottom. Then used the Kreg to make the pockets and then screwed it in place. 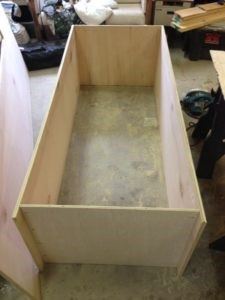 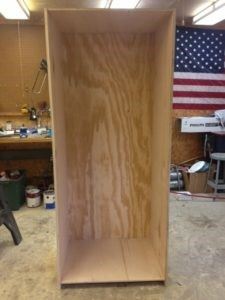 5) Again using the same dimensions, I cut and put in my top shelf but used the 1/2″ birch. 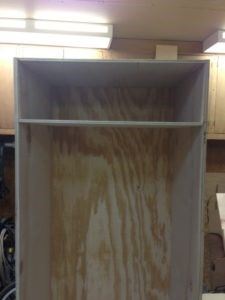 6) In preparations to put in my center divider I took two scrap pieces of ¾ wood and glued/nailed them together then stuck them on the bottom. This gave the unit a more sturdy footing, and also will give the divider good support once it’s in. 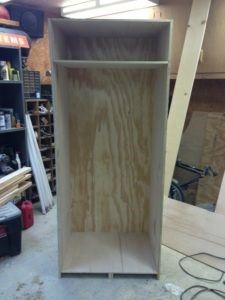 Next was to put in the divider and let me tell you, it was a pain! I wanted to try and make both sides as equal as possible so that the drawers would be the same size. I got close, but not exactly equal. Also you can see my center footing from the last step came out a little off center. No big though because a kickboard will be installed later. It’s really important to get this divider level though because it will affect the drawers. I found it best to lay the unit on it’s back and crawl in one of the compartments.

7) I cut the divider and made my Kreg pockets. Then using the help of my very patient husband, I grabbed my pencil, torpedo level, and tape measure and made sure sure sure that the front and back were level then the top and bottom were level, then the bottom’s front and back were level…then screwed everything in place. The left compartment is 14 3/4″ and the right is 14 7/8″. Being slightly different sizes doesn’t really matter as long as you have the measurements straight before making the drawers. 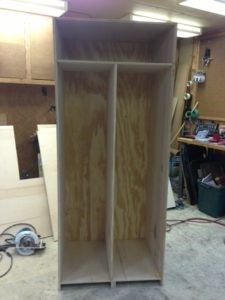 8) Now I started putting in the sliders. The hardest part of this step is just making sure that the sliders are level and line up with their counterpart. I found it easiest to lay the unit on its side then go through and screw on the row of sliders. Then flip the unit over and screw in the other row. 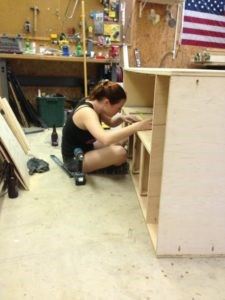 9) Time for the drawers. Looking online it seems that the right way to make drawers is to use the dadoe and the rabbit joint. Here is a great how-to if you have the right tools. I didn’t, and with the sliders, wood, and Kreg pocket jig making this an already expensive project, I wasn’t about to spend more. So I went forward with the elementary way of making drawers…by using the butt joint with good ol glue and nails.

10) Then I put the slider on the drawer and put the drawer in the compartment. 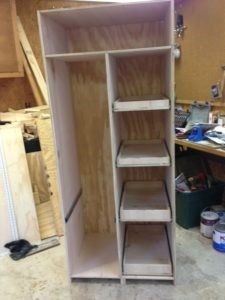 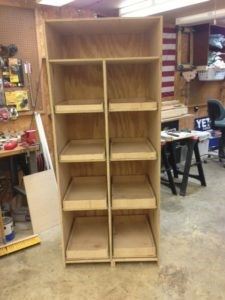 Box Compartment:
Now for the top left space, I knew I wanted to have two pull out drawers designed for boxes and ended up making one drawer for regular-to-big boxes then one for smaller boxes, using 3/4″ wood for dividers.

1) My first step was to put the unit back on its side and install the divider that would split off the two box drawers. To cut out some of the heartache I made four kickstands out of scrap wood to the wanted height then just laid my divider on top and made sure it was level then screwed it in. Note: I put the pocket holes facing right on all my dividers. However, after the sliders are installed they are barely visible. 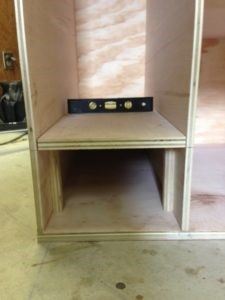 WilkerDon’t: I got the divider in, then went to install the sliders and realized that I wasn’t going to have enough room to get in the back to put in a screw. ….eh. So simple, but still I overlooked it. So I had to take the divider back out. Put in both sliders. Then put the divider back in. So make sure you put your sliders in before making the spaces too small. ; )

2) After the first divider was in, I repeated the process with the second one. Only this time, I installed the sliders while the board was still loose, then installed them both as one.

Note: When installing hardware on a loose board, just remember to keep track of which side is the front/top/back/bottom, so you don’t end up installing it in the wrong position.

3) Next I made the drawers for the boxes and slid them into place. 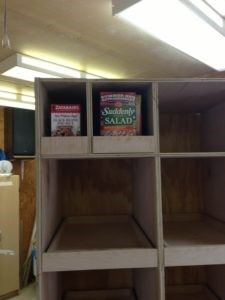 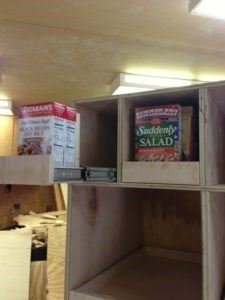 Now once I fill up the entire drawer, I will be able to pull it out and read the side to see which box I want.

4) I went through and cut face plates for the drawers from 1/2″ birch and nailed them in place. 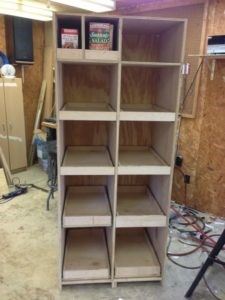 Pullout Wine Rack:
Ok, now I got started on the last compartment. I planned the top right section to be a wine/liquor rack that would…you guessed it…be on sliders. : ) I wanted two tiers and for them to move independently of one another. I wanted it to be able to hold a wine bottle or a liquor bottle and I wanted a design that was low profile so I could not only utilize the space best, but also have it look nice.

1) Using a piece of ¾ wood, I figured out where my slider would be sitting and drew a line. Then looking around my shop at all the circle items I had, I thought this blue cup was the perfect size for making the semi circles that would hold the butt of the bottle. 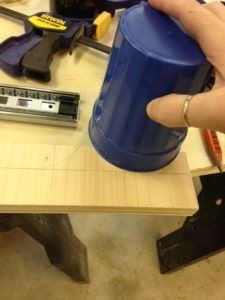 Note: Sliders have two parts; the outer shell slider, which is bigger, is screwed onto the unit then the smaller inner slide is screwed onto the ‘drawer’ then you put to two together to get a sliding drawer. So when you are on this step make sure you are using the bigger portion of the drawer as your line guide. If you use the smaller one, then after you cut your semi-circles out and put the drawer together, your bottle will rest on the metal and not the wood cut out. This turned out to be a moot point for me because I had to build up the material on the sides in order to compensate for the shorter bottles, but if you use only one piece of wood, make sure you take into consideration the bigger slider portion.

2) After making sure I liked the spacing, I clamped the piece of wood down and took a jig saw to it 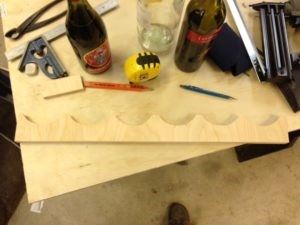 3) To make the piece that would be holding the neck of the bottle, I first found the center of each one of my semi’s then marked it on the edge of this fresh piece of wood. Then I took a holesaw and used it to cut out smaller semi’s. After all the holes were punched, I went back through and sanded them out. 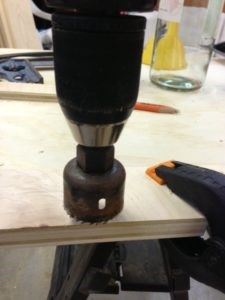 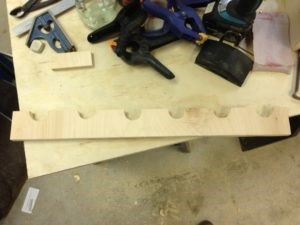 4) After it was cut out, I used it as a template and repeated the process to make a two more identical to it. (explanation in step 6)

5) This is the step where I start to compensate for my wine bottles being shorter than the opening of my space. For the piece that holds the butt of the bottle, I took the wood with the cut semi’s then also took a piece that was the same size then nailed them together. I did not cut semi’s in the back piece because the solid board acts as a good stopper for when the bottle is in it’s nest. 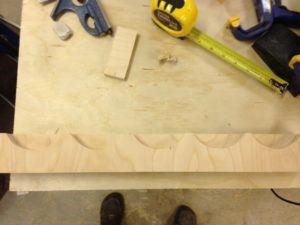 6) Then I took the three pieces of wood with the smaller semi’s and glued and nailed them together. This way when both sizes are placed in the opening, a shorter bottle will rest on the first cut out, but a longer bottle will be able to rest on the second or third cut out. Now that both sides were assembled I cut a bottom out of 1/4 wood and glued then nailed everything in place. Note: This bottom piece is only in place to connect the two sides so they move as one instead of separately. 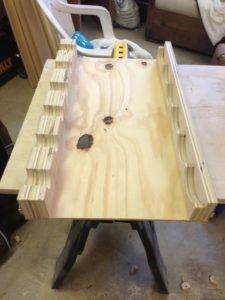 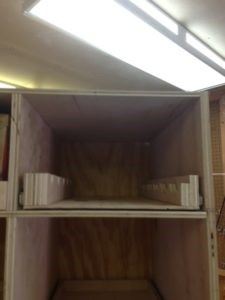 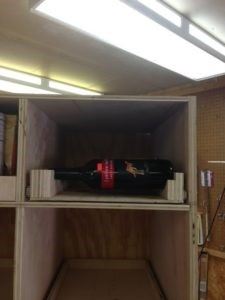 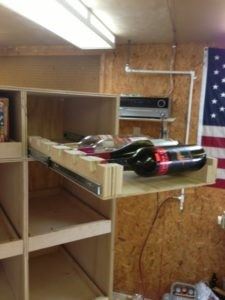 And looky there…it works! Now I think wine is suppose to be stored where it’s touching the cork, but I drink $8 bottle of wine and wanted them flat. If you drink good wine and want it stored properly then just don’t cut down the butt portion so much and it will raise it up to be at an angle.

8) Since I wanted two tiers, I played with different heights then figured a good measurement to install the second level and still allow enough room for a bigger liquor bottle on the bottom. Then I installed those sliders and made a second wine rack that was identical to the first.

9) Next I cut a footer and installed it. 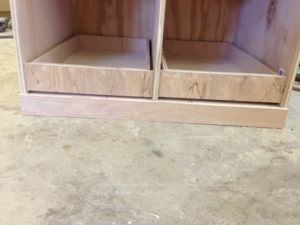 And….that’s it! Well, apart from moving this heavy sucker inside. 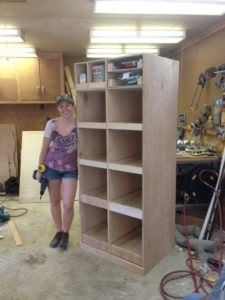 If you are trying to build a pantry and I can help answer any questions or elaborate on any of my own steps, just holler!