I graduated college this past December (finally!), and I absolutely love how creative people were getting with their caps at graduation, so I decided to spruce mine up for the big day. Looking around online it looks like people go with a variety of things from quotes, to messages, to an image that represents them, or even just the school symbol or mascot. Thinking it over, the only thing I really wanted to put on mine was a tree. I love trees and everybody who knows me well knows that, so I thought it perfect. 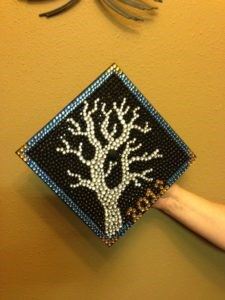 1) The first thing I did was go to Hobby Lobby and purchase a giant thing of the multiple sized white rhinestones, then a smaller bag size of blue and orange (school colors). Asking around I was told that the E-6000 glue was the best for applying the rhinestones to graduation caps, so I threw a tube in the cart and checked out.

2) When I got home I put my blank cap in front of me and just started laying down stones without any glue, just to get a rough idea of how I wanted it to look. I found it easiest to grab a hand full of the white stones and separate them by size so that when I was trying to make the tree, I could grab what size would fit best.

Very important!!! Graduation caps have a front and a back! So before gluing anything on, be sure that your image will be facing the correct way once you put the cap on your head! The triangle goes on your forehead and the rounded off elastic portion goes on the base of your head.

3) I just continued to add more stones until I got a rough picture of what I was wanting. Then played with the placement some, then took out some stones and replaced them with different sizes. It’s very tedious work, but I was really enjoying myself. 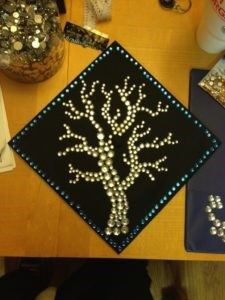 This was quite a long process because I’m rather picky with things I know I will have forever, so when it was time to call it a night, I found the cap a safe spot to hide for the evening to make sure nothing would bump it and mess it up… yes…that is my oven. : ) What?! Nothing will bump it in there, just make sure everybody in the house knows not to turn the oven on. 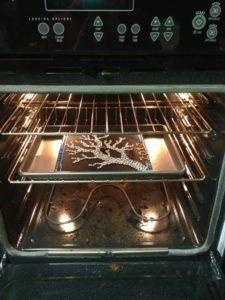 4) I played played played with it for another two days, trying all sort of border variations, and moving branches around, and finally I loved the imagine and brought out the glue. After playing with it some I discovered that holding a pair of needle nose pliers in my right hand and the glue tube in my left was the best system. I would pick up a stone with the needle nose, squeeze out some glue and dab it on the back of the stone. After lying it down on the cap in its spot, I would then use the bottom of the glue tube to apply some pressure and get it out of the needle nose. 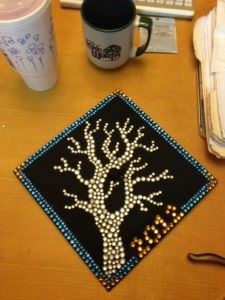 5) Now, I could have stopped there. Buuuut I really was having too much fun, and with graduation still two days away it was kinda settling to be working on something in relation to it instead of just sitting still waiting for the big moment to hurry up. So I decided to fill in the background with black rhinestones! 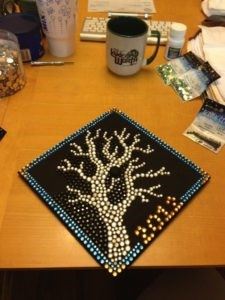 Here is a Wilker Don’t: I purchased two baggies of the black rhinestones thinking it would be enough. I got half of the background filled in and ran out. No big right? Wrong! I went to three different Hobby Lobby’s and none of them had any more black. No problem, I went to Joanna’s and they had some: learning from my mistake I bought six just to be sure! Get home and start applying them but notice after a little bit that there is a difference in the stones I purchased from Hobby Lobby to the ones at Joanna’s. It’s very noticeable in the overall picture. I instantly rip them all off and panic. My Mom steps in to save the day by throwing me in the car and driving almost to Dallas to more Hobby Lobby’s to get the same brand of black stones I started with. Lesson? Buy more than what you think you need because you can always return them, and buy all of the same brand.

6) Nothing left to do but graduate and wear the shit out of your awesome cap! 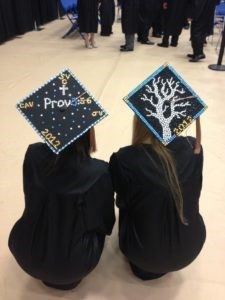 Not only does it make you easily reconizeable from the stands during the ceremony, but it can also act as a beacon for your family to find you once everybody rushes outside to find their graduate. Just take it off and wave it above your head until they spot it. ; ) 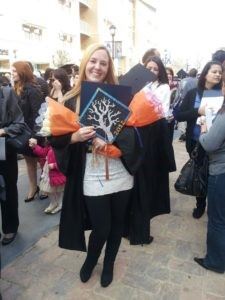 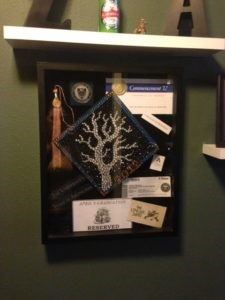 Total Time: 4 days
Total Cost: $30
*Update*
My husband just graduated! To see how I decorated his cap (as well as a few friends), check out my post *here*

One thought on “Decorating My Graduation Cap”